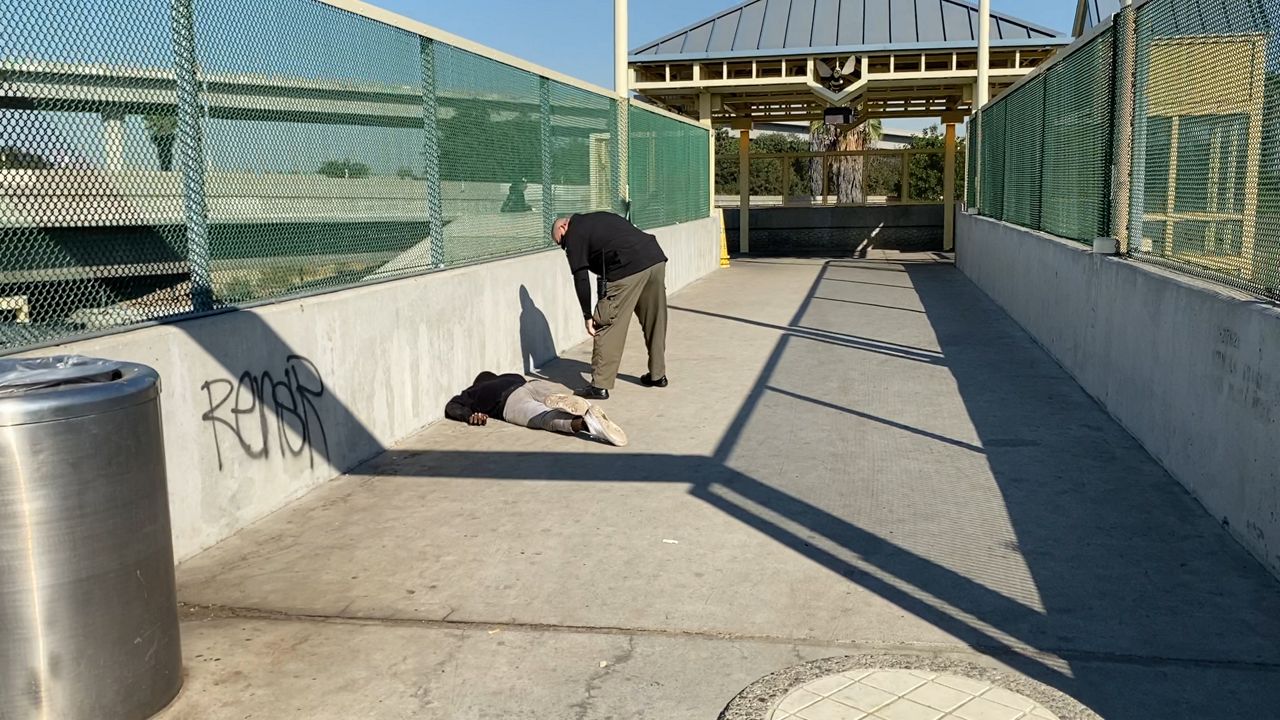 The Los Angeles Sheriff's Department is expanding its TSB program.

LOS ANGELES — The Transit Services Bureau, or TSB, is part of the Los Angeles County Sheriff’s Department, and it serves more than 1,400 square miles of the L.A. County Metro.


TSB is expanding one of its programs to help address the growing mental health and homeless crisis in the area.

T-MET stands for Transit Mental Evaluation Team, and it has been part of TSB for 15 years. A sworn-in deputy and mental health professional make up a team that is tasked with responding to people in mental health crisis and helping the homeless receive resources. This year, the program expanded and there are now 10 teams at TSB, and another 44 to cover the rest of L.A. County.

Using words as his weapon in a situation that could quickly escalate, Deputy Joseph Barker is prepared thanks to MILO.

MILO is a computer program that puts deputies like Barker in simulated scenarios, giving them hands on experience in how to handle someone having a mental health crisis.

“It’s a great opportunity to be in a critical incident in a safe environment where you can think things through. You can try it over again. You can learn from your mistakes," Deputy Barker explained.

Deputy Barker is a certified academy instructor, using MILO to teach Transit Services Bureau deputies the indicators of a mental health issue. One of MILO's scenarios was a veteran, audibly distressed.

“Nobody listens to me, no one understands," the simulated veteran yelled in the scenario.

“Pick up on what he’s saying. You’re watching for weapons and stuff like that to be safe and giving commands and letting him know what to do and at the same time, using those techniques to try to de-escalate the situation or gain compliance without using force or the situation getting worse," he said.

More than 200 deputies who work the Transit Services Bureau are trained using MILO. As part of T-MET, Deputy Barker wears plain clothes so as not to intimidate the people he comes into contact. He is teamed with Yesenia Espinoza, a psych tech with the Department of Mental Health.

When the pair is not responding to calls, they patrol the Los Angeles Metro. As soon as they walked into the Norwalk station, they found a homeless man sprawled out on the concrete.

"What’s going on, you okay?” Deputy Barker asked him.

T-MET got the man awake, on his feet and on his way.

“He didn’t want any help, he was just sleeping," Barker explained. "A lot of them stay awake all night because it’s kind of dangerous for them, you know. Their stuff gets stolen or they get assaulted so they’ll end up sleeping during the day on the trains or on the benches.”

Like most on first contact, the man refused any services from T-MET. They said it typically takes about three interactions before the homeless accept any help.

Then they heard screaming from the trains below. Another homeless man they later determined was agitated over not having his social security card. According to Deputy Barker, a situation that would result in a 911 call with uniformed deputies. One that could quickly escalate if the man was not compliant, but Deputy Barker took a different approach.

“Just by us speaking to him, he came way down. Immediately," he said.

Deputy Barker and Espinoza gave the man information on how he can get a new card. If he were willing, they would have taken him to the office to get it. Deputy Barker said he has transported people to the DMV, welfare office, and most often, to shelters.

This year alone, T-MET has made over 6,000 contacts with people in need and transported 1,300 of them to housing and other treatment programs.

“If they’re ready on the spot, we can actually start calling places and if they have a bed available, we’ll take them," Espinoza explained.

Their next stop was another known hotspot for the homeless. Deputy Barker said unlike typical officers on patrol, T-MET has the time to connect the homeless directly to services.

“We have the time to do that, we have the resources to do intake to get them into a program and get them off the street," he said.

They are teams focused on the fluidity of mental health situations to ensure everyone has a safe home to return to.