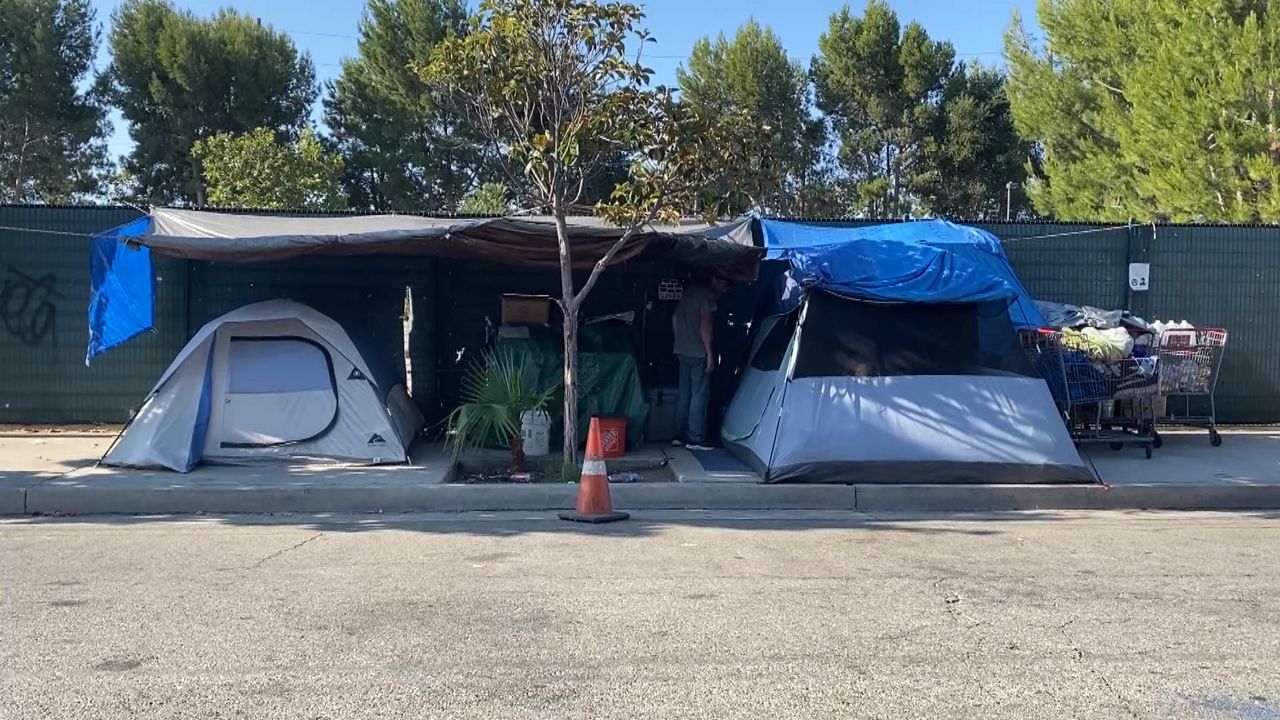 LOS ANGELES — The Los Angeles City Council will vote on whether to ban encampments around schools and daycares Tuesday, just as a federal program that sheltered more than 10,000 Angelenos in hotels over the COVID-19 pandemic ends, sending many participants back to city sidewalks.

The Council voted 10-1 in favor of expanding Municipal Code 41.18 in July, with Councilman Mike Bonin dissenting.

Since the vote was not unanimous, the matter requires a second vote.

Under the shelter of a tarp in Van Nuys, the Myers family is already camping in a 41.18 zone in defiance of the law. Six barking chihuahuas provide affection, safety and security while the family watches for sweeps and police.

Council President Nury Martinez banned camping outside the nearby Bridge Home Shelter using 41.18. Her office said they continue to focus on outreach while tents remain. Martinez introduced the amendment to the ordinance to include schools and daycares under the urging of Los Angeles Unified School District Superintendent Alberto Carvahlo, who said teachers, principals and parents have expressed concerns about encampments near campuses.

Even before the expansion, the ordinance has allowed city council members to sweep encampments under the threat of citations and arrests, banning encampments in selected areas like Olvera Street, certain schools and parks.

Many of the homeless accepted hotel rooms through Project Roomkey, a pandemic program funded by FEMA to shelter people without homes during the pandemic. Hotels are steadily closing as the program sunsets in September.

The city is struggling to find affordable apartments for participants who have emergency housing vouchers. Out of 3,365 vouchers issued to LA under the American Rescue Plan, only 325, or 10%, have led to leased apartments, according to the Housing Authority of the City of Los Angeles. An additional 433 move-in contracts are in the works, HACLA said in a statement.

Opponents to the ordinance’s expansion packed the City Council chambers last week, but the vote was delayed until Tuesday. Outside, 18-year-old software engineer Kyler Chin showed how the amended ordinance would ban camping in approximately 20% of the city. Chin used public data to input the locations of over 1,400 affected schools and daycares to create the map for the Kenneth Mejia Campaign for Los Angeles City Controller.

“I hope the council members see it, and they are able to understand the scale of the legislation that they have written," Chin said.

The Myers family says living in an anti-camping zone means someone must always be on guard for sweeps. Tanya’s 21-year-old son has special needs, and her husband Michael can’t find work because of visible wounds from skin cancer.

She has little hope her family will ever get off the street. Instead, they’ve adjusted to life in a tent and will stay as long as they can.