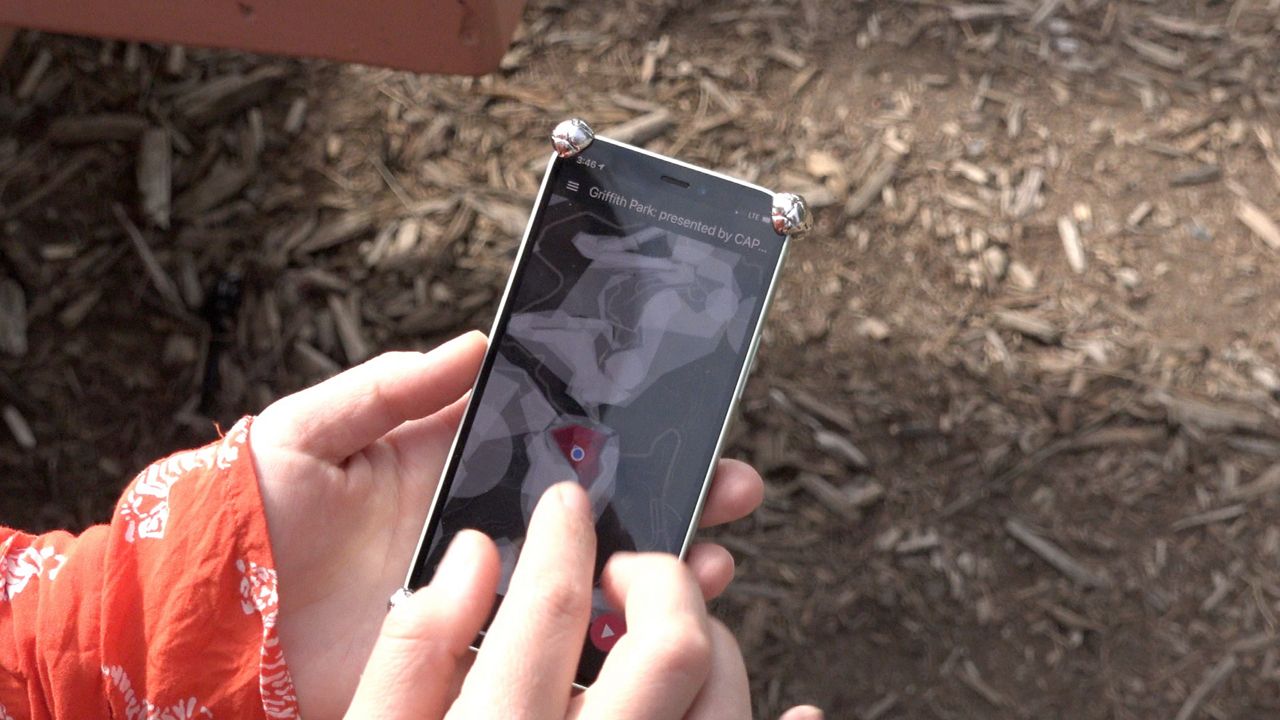 LOS FELIZ, Calif. — Ellen Reid listened to music on her iPhone with earbuds in place as she hiked along a trail in Griffith Park.

She looks like any other person listening to a personal playlist as they hike — except Reid was composing personal music while she hiked. She suddenly paused on the trail and touched one of her earbuds.

“Right now, when I stepped right here, a violin came in,” Reid said.

Reid is a Pulitzer Prize-winning music composer and sound artist. But anyone who treks Griffith Park doesn’t have to be a professional musician to compose their very own soundtrack as they hike. All they have to do is load Reid’s app onto their smartphone.

“So right now, our GPS is saying that we’re here,” Reid said, pointing to her phone.

It’s a stylized map of all the hiking paths in Griffith Park. On the place where she stood, a blue dot pulses in a pink-shaded area.

“The pink says [the sound files] are turned on,” Reid added.

After you download Reid’s app, several sound files are loaded onto your phone. The satellite triggers your phone to play those sound files, each one at a particular place or zone.

“It sees where you are, and as you enter into new zones, it plays the sounds of those zones,” Reid said.

Reid put her phone on speaker, and a vocal track played. In this zone, a woman’s soprano voice soars. She hiked a few steps farther, and a harp came in. In the next zone, the GPS triggered another sound file. The sounds blend and overlap as she moved from the location.

“Right now, I’m hearing a French Horn,” said Reid as she moved on up the trail.

“I was hoping the music I wrote for Soundwalk would illuminate the landscape around you and make you feel it more deeply than if you didn’t have the soundscape at all," Reid said.

The sounds are unique to the trail’s features. In one zone, for example, the music rises as you hike up in elevation.

“So, the upward-moving music gestures toward this expanse,” Reid said, pointing to the cityscape hundreds of feet down the mountainside.

Reid spent hundreds of hours hiking these parts, taking notes, and then transcribing them into musical notes for musicians and vocalists to record the sound layers. She continued up the trail and then stopped again.

If a hiker follows the trail to its end, the composition crescendos at the famous Hollywood sign.

“I wanted something that felt kind of, over the top,” Reid said as her iPhone blared a cinematic score.

Reid installed a previous Soundwalk in Manhattan’s Central Park. The Griffith Park installation, sponsored by UCLA’s Center for the Art of Performance, covers several trails. Because everyone walks at their own pace, and the fact that there is a ten-foot deviation in how the satellite records someone’s location, Reid explained, each hiker scores their very own personal soundtrack.

“So the hope is, you can come back and try it multiple times and have a different experience every time, even if you’re walking on the same trail,” Reid said.

Reid’s app is free and is available in Apple’s app store and on Google Play.