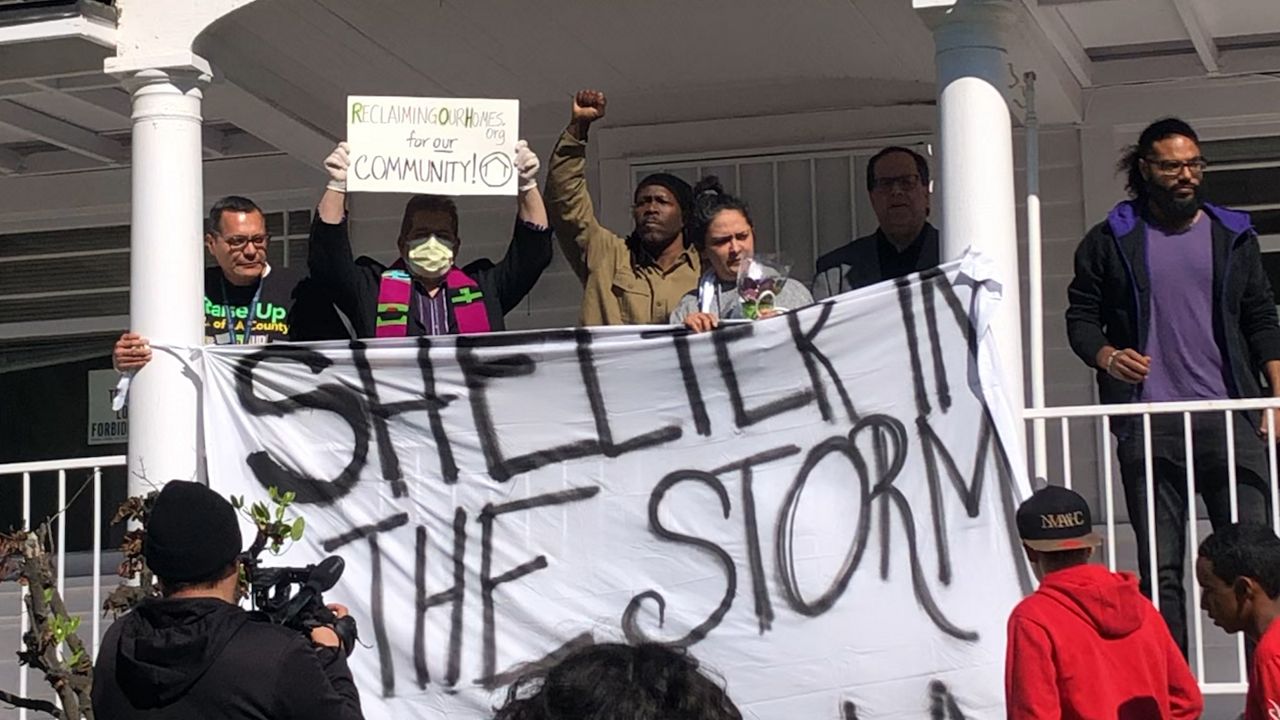 EL SERENO, Calif. –  In the midst of the COVID-19 crisis there is another crisis that is ongoing in our communities . . . homelessness.

A new movement has cropped up in Los Angeles to occupy vacant houses owned by Caltrans. Some 460 homes were purchased by the state agency during the 1950s, ’60s, and ’70s to make way for an extension of the 710 Freeway.

That project was nixed two years ago due to community opposition, but at least 163 of those homes have been sitting vacant for years – even decades. And how unhoused families are now taking action to get a roof over their heads and find safety during the coronavirus pandemic.

The gospel song “This Little Light Of Mine” was an anthem of the civil rights movement in the 1960s. On a recent afternoon in El Sereno, it was sung as part of a modern-day protest as dozens of people gathered to support Ruby Gordillo as she and her family laid claim to a state-owned vacant house.

“This is about those who don't have safe and stable place to sleep it,” Gordillo said.

Gordillo shared some of her story with a crowd of community members, housing advocates and neighbors. She talked about being homeless for six months and then spending the last five years with her husband and three kids in temporary living situations . . . usually with all of them in a single room.

“My bed serves as the dining table, serves as homework space, and as a trampoline for my son,” Gordillo said before breaking down in tears.

Someone in the crowd yells out, “It’s OK Ruby. Take your time.”

Gordillo is a part of a new homeless advocacy coalition called Reclaiming Our Homes that is trying to move families and seniors into the vacant publicly owned houses that were bought decades ago by Caltrans.

No one should be homeless when homes are empty. Today, we are taking matters into our own hands & moving into vacant houses owned by @CalTrans! Shame on the state for sitting on these properties during a housing & public health crisis. #COVID19 #ReclaimLA #HousingIsAHumanRight pic.twitter.com/d5AMGdOXrC

She and her children are followed by a group of supporters as they open the front door and take their first walk through what they hope will be their new home for a long time. They wander through the hallways, living room, and end up in a bedroom at the back of the house.

Gordillo looks out a window and sees the backyard.

“My kids will finally have a place to play,” she said. She covers her face with her hands as tears flow again. “You taxpayers have paid for this home long, long, long ago. And it's time that it gets a family in it. That these walls get to hear children’s laughter.”

In one week, 11 houses were occupied by Reclaimers supporters who helped move in some donated furniture. In recent months, homeless advocates have cited the state's affordable housing as justification for taking over vacant houses.

“We are aware of the situation and Caltrans is currently in discussions regarding the use of these properties.”

The Reclaiming Our Homes protesters said they were inspired by a similar protest in Oakland a few month ago by a group called Moms 4 Housing. The group in Los Angeles is receiving assistance from the Alliance of Californians for Community Empowerment, an organizing group that has advocated for state measures to expand rent control and other tenant protections.

“We hope that the message will come across to all of our elected officials and hopefully they'll be able to really provide a shelter for all of the unhoused and under-housed,” Gordillo said.

With even more urgency to find shelter during the COVID-19 pandemic, the theme for Gordillo's Reclaiming Our Homes action was “shelter in the storm.”

She wandered around the backyard with her daughter and watched her son kicking a ball around in the driveway with his friends. Tears flow again as she shook her head in disbelief.

“I want everyone to hopefully understand that everyone that needs a stable house to be able to have it. We can't be just sitting on these vacant houses. It's yours and it's mine. It's ours. Let's use it. I’m just overwhelmed with joy and gratitude and humbled by all the support," she said.

It's not clear whether Ruby and her family will be able to stay. But what is clear is that it sometimes takes a village to turn a house into a home.

For more information check out: reclaimingourhomes.org