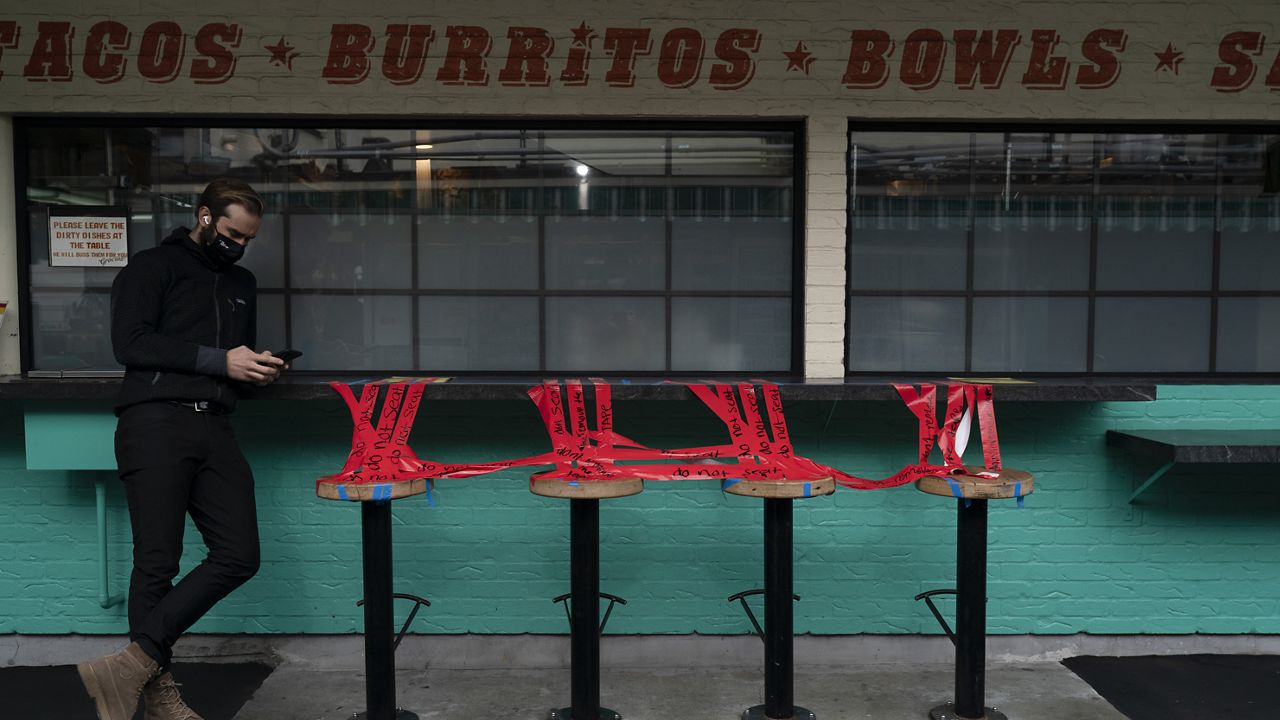 FILE - In this Monday, Dec. 7, 2020, file photo, a man looks at his phone next to stools taped off to prevent diners from sitting on them in Los Angeles. The nation's largest county acted "arbitrarily" when it banned outdoor dining at restaurants during the coronavirus pandemic, a Los Angeles judge tentatively ruled Tuesday, Dec. 8, 2020, in a case that could have implications for other California businesses struggling during the state shutdown. (AP Photo/ Jae C.Hong, File)

Los Angeles County Supervisor Kathryn Barger tells Inside the Issues there’s a balance that’s missing from the messaging and restrictions placed on businesses, and especially restaurants, from county leaders and public health officials.

She said the people she has talked to have tried their best to comply with health orders but they are fatigued from the constant changes.

“They're tired, they're confused, they feel like they're complying with everything they're asked to do and yet we're seeing our numbers go up and we know that much of this is tied to large gatherings.” she said.

It’s not dining outside that’s the problem, she believes superspreader events are to blame for recent spikes in positive coronavirus cases across the state.

“We knew Thanksgiving holiday was going to be a challenge and we're seeing that now with the numbers in the increase and what people don't realize is when you look at those are ending up in the ICU, yes, many of them do have pre-existing conditions, but more than likely they contracted it from someone who may have been at a large gathering, brought it home unbeknownst to them, exposing their loved ones,” she continued.

County officials have learned so much about the virus, Barger said, since the beginning of March when stay-at-home orders were first put into place.

“Clearly the number of positives is going up, but early on in this pandemic, we were at a much higher rate of people ending up in the hospital. That's attributed to the therapeutics that are in place and quite frankly, the people that are being infected,” she said. “They’re younger and their recovery is swifter and they don't end up in the hospital.”

She is encouraging others to assume everyone you come into contact with has the virus.

“You need to wear your mask, you need to social distance and if you fall into the category of high-risk age, please, please, please, limit the amount that you go out and come in contact with people,” she urged. “It's important for us to recognize the virus is here and so what I tell people is: we have to learn to coexist with it until the vaccine is out and it gets offered to the entire population.”

In response to the recent closures of outdoor dining, Barger said these decisions are “arbitrary” and “undermining public health.”

“I feel that we should have done a better job of looking at where this virus is spreading at the greatest rate. And we all know, and Dr. Ferrer has said, it is in large gatherings,” she said. “The standards for one group are applied and for others, we’re just going to shut them down. So, for me, I think the inconsistencies and the arbitrary decisions are what really are undermining our ability to gain public trust in order to comply with public health orders.”

Enforcement of the regulations has also been spotty, she said, with restaurants being forced to halt outdoor dining, but there are still large gatherings taking place and many are not being held responsible.

“We have environmental health, which is still getting paid to do their job, we're going out and doing inspections. We do have the enforcement arm as it relates to restaurants,” she said. “Clearly, this is uncharted territory and to look at a county with 88 cities, who also issued their own business license, as well as the unincorporated areas, a lot of it has to do with self-policing. I know in Pasadena, when Pasadena decided not to comply with what L.A. County was doing as it relates to closing the outdoor dining, I talked to restaurant owners who actually were policing themselves and making sure that those in their city were not jeopardizing their ability to stay open.”

Barger said people need to take responsibility for themselves, wear a mask and socially distance this holiday season in order to avoid another large spike in cases in the future and allow for businesses to stay afloat.

“I think we need to have realistic guidelines that don't shut down the entire economy, but at the same time educate people that they have the ability to stop the spread by taking personal responsibility and working with us and also work with our 88 cities,” she said. “Some of my cities have felt they have not been a part of the discussion, so let’s bring them in to the discussion, because who better than our elected officials in those cities as well, to work with us hand-in-hand to ensure that we are supporting our economy as you stated at the beginning of the the interview, that balance and creating a balance that truly is going to protect our public health but also address our economy.”