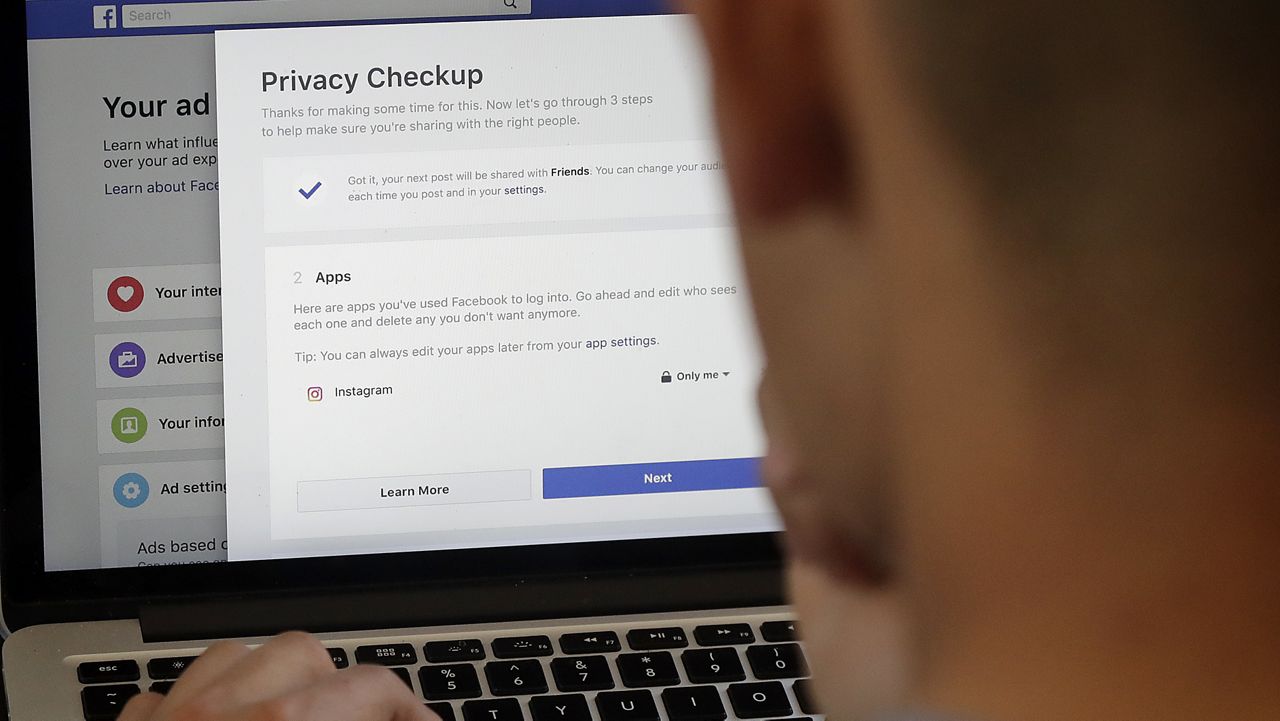 In this March 26, 2018 photo, a man poses for photos in front of a computer showing Facebook ad preferences pages in San Francisco. When California lawmakers return from their summer recess, in August, they say they plan to fix problems in a data privacy law they passed last month. (AP/Jeff Chiu)

But the pair decided the law did not go far enough, and have made an effort to get California Privacy Rights Act (CPRA), or Proposition 24, on this year’s ballot to add more privacy protections for consumers.

Alastair tells Inside the Issues that online privacy is an important issue to him because artificial intelligence could get more powerful and will begin obtaining data about a person from many different places.

“It’s one thing to go buy something on a site, it’s another thing to have that fact be itself sold or the fact that I read some article be sold,” he said. “That’s where the real distinction for me is that you go read something, but you don’t expect that fact to be available for sale. And, by the way, it’s not just sold. Now it sits in a database forever.”

When signed into law, the CCPA of 2018 became the nation’s strongest data privacy law, said Celine.

“That was a huge, huge thing for the country,” she continued. “But what happened in 2019 was it was an all-out assault in the legislature by Big Tech to try to take the CCPA down, and he and our lobbyists and our team and our advocates were working beyond full-time to try to stop Big Tech from poking holes in this.”

If approved in November, Prop. 24, or the California Privacy Rights Act, would strengthen the California Consumer Privacy Act (CCPA) that voters approved in 2018.@privaCMac of @caprivacyorg explains why she & her husband, Alastair, are fighting for stricter data privacy in CA: pic.twitter.com/H01bCWm8OV

That was the motivation to create the new proposition, as privacy is a constitutional right, in California, Celine explained.

“We knew that it was going to be a presidential election, there was going to be a lot of attention and a lot of people and record-breaking numbers in excitement at the polls, so we really thought that this was the right time to do this,” she said. “That will strengthen our work in 2018 and really make it impossible for the legislature to poke any future holes in it because any amendments can only be made to further privacy — it’s a one-way ratchet, and knowing that is really important to voters, and we know that their privacy is also very important, too.”

The existing law is made up of a couple basic pillars.

It also has protections for children under 13 and has penalties for businesses if they are negligent with a user’s information.

The new initiatives would enact a “one-way gate,” Alastair explained.

There are protections on data minimization, so businesses have to tell someone why they are collecting the data. They cannot use it for any other purpose than what they have stated, and they can’t collect more than they need to.