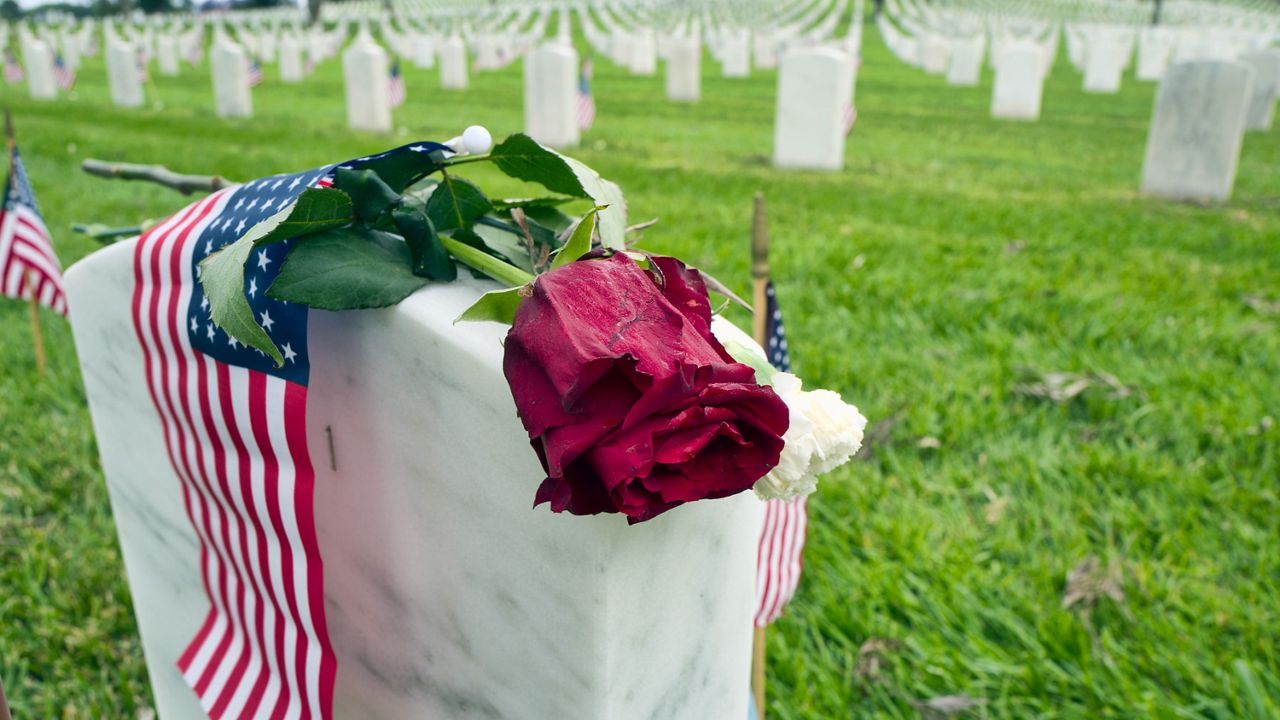 EDITOR’S NOTE: Multimedia journalist Ryann Blackshere Vargas spoke with Marine veteran Major Neil Reich on Veterans Day about his years of service. Click the arrow above to watch the video.

Southern California communities are playing it safely by necessity this Veterans Day.

COVID-related protocols and mandates have forced some sites, like the Los Angeles National Cemetery, to forego events entirely. Communities throughout the Southland are holding a mix of in-person and virtual events to honor fallen veterans and active-duty service members alike.

Officials for nearly all of the below-listed events request that people think twice about attending if they feel unwell.

Starting at 10 a.m., the Santa Monica Mountains National Recreation Area will host a Veterans Day event at the King Gillette Ranch Visitors Center. The observance will include remarks from United States Navy Captain Ryan Bryla and Army Lieutenant Colonel Charmaine Betty-Singleton, as well as a hike to Inspiration Point and appreciation gifts for veterans.

The event is free, but reservations are recommended.

The African American Cultural Center of Long Beach, operating out of the Expo Arts Center, will celebrate the grand opening of its African American Military Heroes exhibit from noon to 7:30 p.m., with a program beginning at 5 p.m. The exhibit will include “Forgotten Images,” including documents and artifacts dating to 1865.

The event is free and open to the public.

Veterans West will host a celebration at the Pacific Battleship Center-Battleship Iowa Museum, featuring remarks from museum officials and veterans advocates; a presentation of “Quilts of Valor” to veterans; and a brass ensemble performance. The program begins at 10 a.m., though throughout the day, the event will also include a resource fair with 40 exhibitors, live music and food.

The event is free and open to the public.

The City of Anaheim’s annual Veterans Day in downtown Anaheim is free to the public and will be held at the city’s Veterans Monument starting at 11 a.m. Remarks are expected from Mayor Harry Sidhu, Marine Col. Samuel L. Meyer, and American Legion Post 72 Commander Christopher Padilla.

The public is invited to attend; COVID measures will be in place.

The ceremony, from 11 a.m. to 2 p.m., will include a performance by the All-American Boys Chorus, the presentation of personalized “Quilts of Valor” to local veterans, a birthday cake cutting honoring the United States Marine Corps, and children’s activities.

The event is free to the public.

The Ronald Reagan Presidential Library will remember American military veterans in a Veterans Day program, scheduled from 10 a.m. to 3 p.m., which includes remarks from United States Marine Corps veteran Bob Parsons, as well as an honor guard and live music. The library will also feature a civil war encampment, a military vehicle display, and a program honoring all military branches.

The outdoor program is free to the public, though reservations are recommended to attend.

Redondo Beach will observe Veterans Day at Veterans Park, the city’s seaside memorial to members of all military branches and prisoners of war. The ceremony, beginning at 1 p.m., will include remarks from elected officials, as well as music from the California National Guard’s 40th Infantry Division Band, and a ceremonial changing of the colors.

Following the ceremony, the Redondo Elks Lodge will host a BBQ. Veterans and active duty military and first responders will eat free; a $5 donation is requested of all others.

The City of Santa Clarita will host a ceremony honoring veterans and active military members starting at 11 a.m. at the city’s Veterans Historical Plaza. The event will include remarks from elected officials, a changing of the colors, and musical performances.

The City of Pasadena’s Veterans Day observance will take place at 10:30 a.m. in front of Pasadena City Hall. The ceremony will feature remarks from Mayor Victor Gordo and Los Angeles County Supervisor Kathryn Barger, as well as music from the Pasadena City College Band and the Pasadena Scottish Pipes & Drums.

The Condor Squadron, a nonprofit organization that flies in restored military training planes, will perform a flyover at 11:11 a.m. The program will be available for online viewing at pasadenamedia.org/channel/kpas.