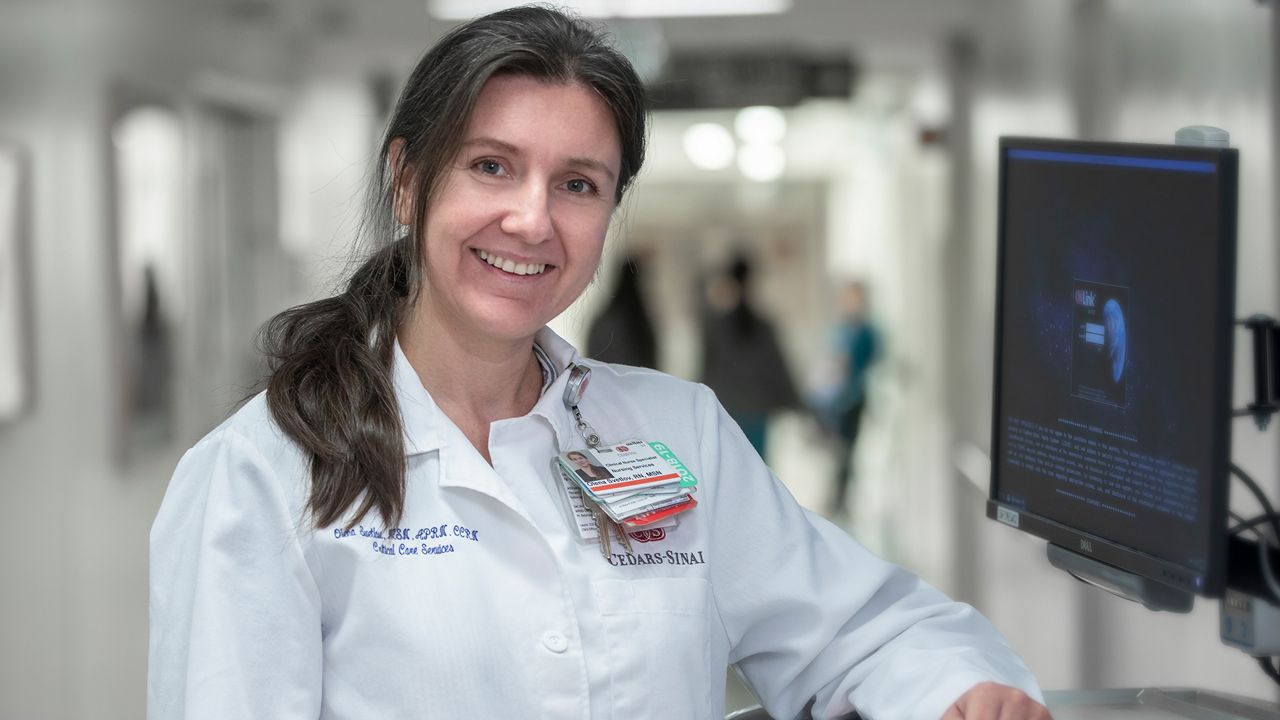 LA Nurse Went From Homeless to Saving Lives in a Pandemic

WEST LOS ANGELES — It’s hard to tell by her mask, but despite the hardships of serving on the front lines of a pandemic, registered nurse Olena Svetlov makes it her mission to smile as much as possible.

“Nurses are positive people. We believe in good, we bring good energy, I think it starts from us,” Svetlov said.

Svetlov leads nurses who are bedside caregivers at Cedars-Sinai. Those who literally hold the patient’s hand through the most serious stages of their illness.

“This is dear to my heart, you help people. This is how it is and why I chose nursing,” Svetlov said.

But the journey to how Svetlov came to choose nursing makes it all the more inspiring in light of how positive she is.

Svetlov grew up in the former Soviet Union in an area that is now part of Ukraine. Her parents and grandparents all died as a result of the Chernobyl disaster. Svetlov dedicated her early life to education, earning a PhD in literature and eventually began working for the government there as a translator.

She was in her early 20s when she said officials asked her to translate something incorrectly. When she refused, she began to be harassed. So she decided to flee to the United States and seek political asylum.

“I remember on the first days in L.A. I was homeless,” Svetlov said. “Nice bench. Thank God California has nice warm weather. A little chilly at night. I can relate to the homeless population and it is scary.”

“You’re coming in with PhD in literature and here you’re like, OK here’s the dishes, there’s the load,” Svetlov recalled. “I realized I need to go back to school. Basically you’re starting your life from scratch and any immigrant will tell you the same story.”

It was around that time that Svetlov chose to study medicine and dedicate her life to serving others through nursing.

And although Svetlov has a bubbly, optimistic disposition engrained in her, the pandemic has still taken an emotional toll. It’s hard for her to think about the COVID-19 patients she cared for who lost their battles to the virus.

She and other nurses on her staff are looking to an approved vaccine as a saving grace, to lift some of the burden they’ve been carrying for months.

“We excited, we excited, my nurses were asking me, ‘Olena I’m the first one to get it!’ I’m like yes,” Svetlov said, “We’re very fortunate. We’re really looking forward to it.”

Despite recent studies that show as many as 70% of people are still concerned about the vaccine and unsure if they will get it, Svetlov said she trusts the science that led us to a vaccine so quickly.

“I am from Ukraine, I have my TB vaccine so when I’m taking care of a TB patient I’m not worried that much. Vaccination, this is something that is a must, we’re looking forward for it, and it will create a safety net for all of us,” she said.

A safety net and another reason for Svetlov to smile. Because despite the challenges and hardships, she’s grateful to be on the front-lines caring for others and among the first in line to get the vaccine.