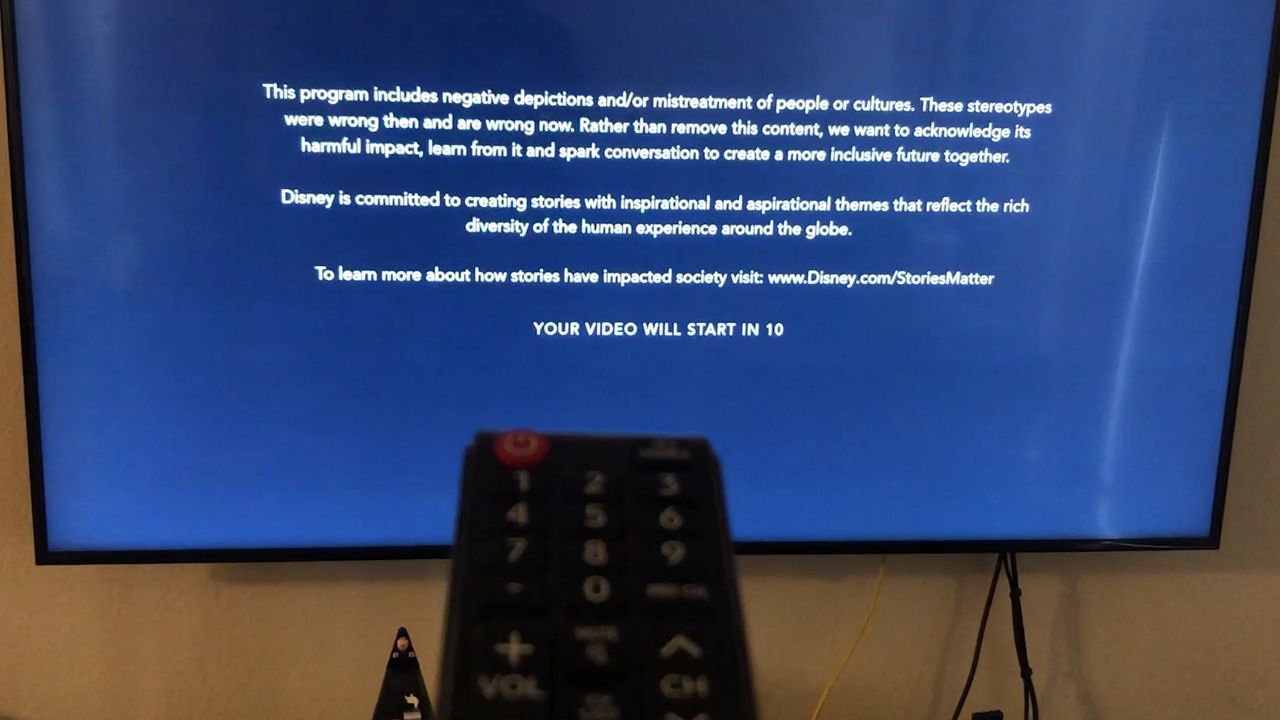 The disclaimer invites viewers to visit a website entitled Stories Matter. It details some of the problematic imagery in specific films.

PASADENA, Calif. — Cuddling up on the couch to watch Disney+ is a common pastime for the Borr family, but that does not mean they are always comfortable with what they see on screen.

“A lot of different marginalized groups are portrayed in certain ways in these films that’s just not okay,” Danielle Borr said. “We do have those conversations. We do talk about those stereotypes.”

Borr who is a mother of three children — Benjamin, Phoenix, and Donovan — realizes that not all households discuss the issues as openly as her multiracial family. For that reason, she welcomes the new disclaimer that Disney has placed before some of the titles on their streaming service, warning that the program includes, “negative depictions and/or mistreatment of people or cultures.”

The statement goes on to say, “These stereotypes were wrong then and are wrong now.”

Borr agrees and thinks the advisory, which appears for 12 seconds before a film starts, is a step in the right direction.

“It’s a teachable moment,” she explained. “If we’re talking about being the change and wanting a different society, it’s that conversation that can definitely unlock the door to that better society.”

The disclaimer invites viewers to visit a website entitled Stories Matter. It details some of the problematic imagery in specific films. For example, the mockery of Indigenous People in Peter Pan, who are also repeatedly referred to by an offensive term. A cat in the Aristocats, which the site acknowledges as a “racist caricature of East Asian peoples,” or the crows in Dumbo, which the Borr children have never seen.

The group performs what Disney terms an “homage to racist minstrel shows.” One is even named Jim Crow.

“People are like ‘I never saw it that way,’” Borr said, “It’s kind of like, how could you not see it that way? Because it is, it’s very blatant.”

Borr feels it is important that we acknowledge the stereotypes and the issues these films raise and not excuse them out of a sense of childhood nostalgia.

“Think about the burden that’s put on those groups that have these stereotypes placed on them — how they’ve got to try to explain them to their children,” she said. “For your nostalgia, that’s someone else’s pain.”

In her experience, she has found that kids are ready to talk about race. Borr said often it is parents who feel uncomfortable, but it is vital that they work through that discomfort.

“Engaging in these difficult conversations with our children develops trust and lifelong dialogue,” she said. “We are demonstrating that they will be able trust us with heavy topics down the line, and we are open to addressing them together.”

Borr supports Disney’s decision to keep the content available with the added messaging that she hopes will spark dialogue, as it is intended to do. This is how real change starts to happen, with conversations in living rooms across America as people address harmful stereotypes head on, Borr explained.

“It shuts them down in those moments,” she said. “So being brave enough and getting outside your own discomfort to have those conversations can absolutely improve the well-being and also the mental health of the people in those marginalized groups and those racial groups that have been depicted in that way for so long.”

Borr hopes people will tune in to why these images are problematic rather than just continue to tune them out.