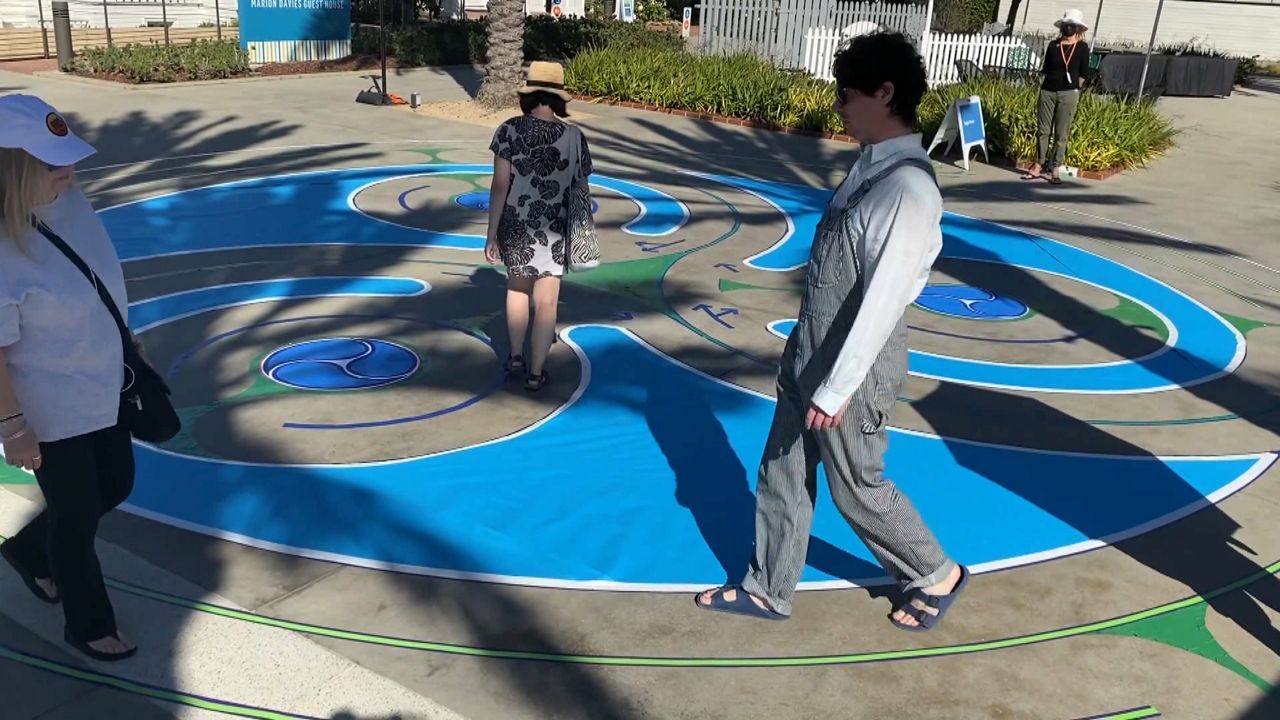 SANTA MONICA, Calif. — The sun was blazing in Santa Monica on a recent Friday afternoon. It was an unseasonably warm day, even for Southern California. Artist Lars Howlett was working up a sweat raking masses of sand into large interconnected concentric circles. Helping him was an enthusiastic group of seven volunteers. They were all shaping sand into even eight-foot pathways.

Howlett is one of the few master labyrinth builders in the world.

The labyrinth is an ancient path with an intricate and distinct, circular pattern that dates back over 4,000 years. The idea is that you weave your way around the path until you reach the center.

Labyrinths are part of spiritual and meditation practices across the world. Lars has studied them extensively and has made a career out of building them for over a decade.

For this project, he was commissioned by The Annenberg Community Beach House and Santa Monica Cultural Affairs to construct three distinct labyrinths for a two-day festival: Out-Of-The-Blue.

“I love everything about Labyrinths,” Howlett said. “There’s the geometry and the design aspect. There’s the history and mythology of labyrinths, there’s the spiritual practice,”

Two of his labyrinths for the festival were made from sand, one, situated in the Annenberg patio, was created using tape and paper.

More volunteers were out helping on Friday afternoon — architect Jesse Taylor said he wanted to help because he was interested in hearing about labyrinths from a design perspective.

“When we think about pathways, it’s always ‘a to b,’ trying to take the fastest path, rather than the more interesting path,” Taylor said.

Labyrinths do the opposite. By following the path of a labyrinth, you take the longest route possible to get from ‘a to b.’ There’s only one route in to a traditional labyrinth and one route out. People who walk them regularly say following a path can help the mind relax — the walk becomes a moving meditation.

On Saturday morning, the festival began and people began to walk the labyrinths at the Annenberg, some who had never seen them before and others who were experts. Katie Bull, a labyrinth enthusiast, was volunteering as a facilitator, answering questions for visitors.

“The labyrinth has been a big part of my life, if I want to work out a dream or I have a problem, I can take it to the labyrinth,” Bull said. Bull regularly visits the many public labyrinths located in parks, churches and gardens around Los Angeles, with a mindfulness group. “I think COVID was a very pensive time for all of us. We were all being called to look within,” Bull added.

Howlett’s career is entirely focused on building labyrinths and since the pandemic he’s never been busier.

“I’ve had more calls in the past year than I probably had in the previous five years combine,” Howlett said. “People are searching for a way to have a contemplative practice. There’s so much stress and uncertainty, the labyrinth is a sure path for uncertain times.”

The exact history of labyrinths is unclear but they have been found in church’s dating back to 313 CE.

In the 13th century they became popular across Europe and one of the most famous labyrinths at Chartres Cathedral in Chartres, France was built close to 1200 CE. They are believed to have served as metaphorical pilgrimages for people who weren’t able to travel to holy sites or Jerusalem.

The one at Chartres Cathedral is inlaid into the ground in stone. Howlett’s at The Annenberg, are temporary, but he hopes they help spread awareness about the practice of walking labyrinths.

“There’s a labyrinth for everybody,” Howlett said.  “We are all going through this major transition and the labyrinth is a great place to kind of think about who we were and who we want to be.”