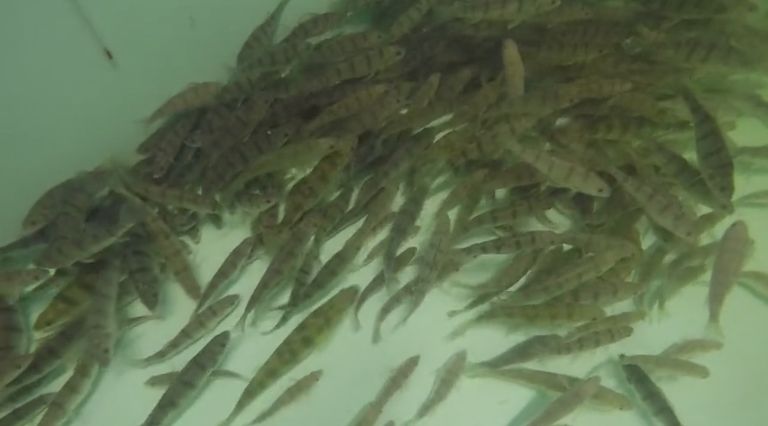 WISCONSIN (SPECTRUM NEWS) -- This time of year brings many Wisconsinites out on Friday nights for fish fries. Over the years, yellow lake perch has gotten harder to find on menus. The Farmory in Green Bay is attempting to turn the tied on the shortage and in the process, help out Wisconsin farmers.

“Almost all of the yellow lake perch that we eat in Wisconsin comes from Canada,” said Dr. Ken Webb, an aquaculture expert at UWGB.

Webb has seen a once thriving local yellow lake perch population become almost non-existent. The shortage doesn’t just affect what’s on your plate. Perch are a big part of the food chain in the Great Lakes.

“This is terrifying. This is the fundamental base of the food web in the lakes. Basically all of the fish that we’re interested in eating from yellow perch up, eat yellow perch,” said Webb.

Walleye, salmon, and trout in Lake Michigan consume yellow perch. A new venture called the Farmory in Green Bay is trying to bring the yellow perch population back.

“The Farmory’s mission is to grow good food, to grow growers, and to educate people,” said Webb.

Annie Schmitz works as a Hatchery Technician at the Farmory.

“By using aqua-culture, we’re going to be able to produce a bunch of fingerlings which then we will work with local farmers,” said Schmitz.

The Farmory has a goal to produce a half a million fingerlings this year. Those are 1” to 4” perch that can be sold to farmers. The farmers can turn that into a profit.

“Come October it will be a premium price for these perch. Buy them off of us then they’ll have another crop to harvest,” said Schmitz.

A clean crop for farmers and a safe, locally raised meal.

As the hatchery grows, Ken imagines what it would take to restock Lake Michigan.

“We here at UWGB are getting kind of a feeling for just what the cost would be to produce those tens of millions of fingerlings so that we can start trying to see, can we stock these back in and restart some of these populations,” said Webb.

The hatchery plans on growing their first eggs in March with their first batch of fingerlings available in April or May.