Meteors streaking across the sky from a Perseids meteor shower. Courtesy: AP/Andres Kudacki

Are you a stargazer? Are you always looking for the next astronomical event?

We've got all the top celestial events happening for the rest of this year for you to mark on your calendar. 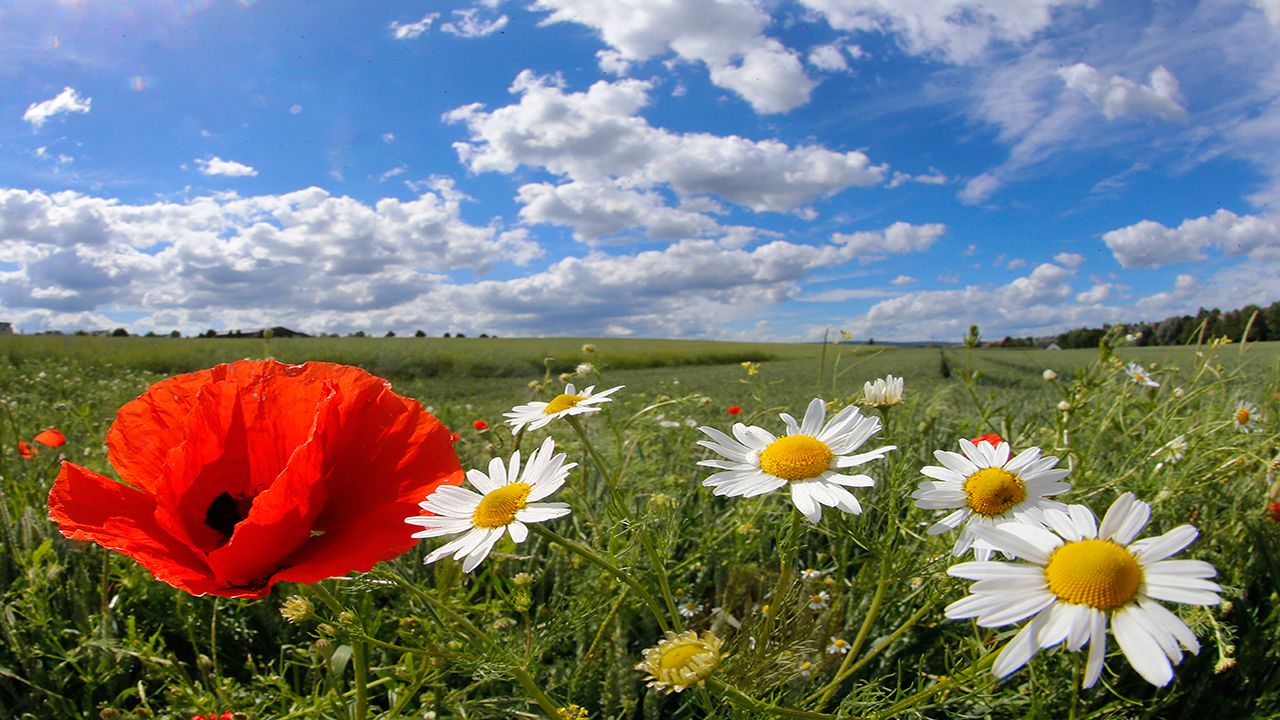 Spring will occur on March 20 this year. Courtesy: AP/Michael Probst

A View of Mercury: On March 6, Mercury will reach its greatest western elongation of 27.3 degrees from the Sun. This time, right before sunrise, look for the planet low in the eastern sky.

Two for One: On the same day as the vernal equinox, Venus will reach its greatest eastern elongation of 46.6 degrees from the Sun, making it a great time to view the planet. Look for it in the eastern sky before sunrise.

Lyrids Meteor Shower: On April 22-23, head to a dark location away from city lights to see the peak of this meteor shower. Known as an average shower, you'll be able to see about 20 meteors per hour.

With a nearly full moon around this time, it might be a little hard to see all the meteors, but a few good ones should still stick out.

Full Moon and Supermoon: This full moon was also known as the Pink Moon by early Native American tribes because it marked the appearance of moss pink. It is also called other names such as the Sprouting Grass Moon, the Growing Moon, the Egg Moon, and the Fish Moon.

This moon will also be the first of 3 supermoons this year. Caballero-Neives stresses that "for the Moon to be a supermoon, it needs to be a full moon and the Moon needs to be at its closest approach to Earth, otherwise known as perigee. Under these two conditions, the Moon appears the largest." 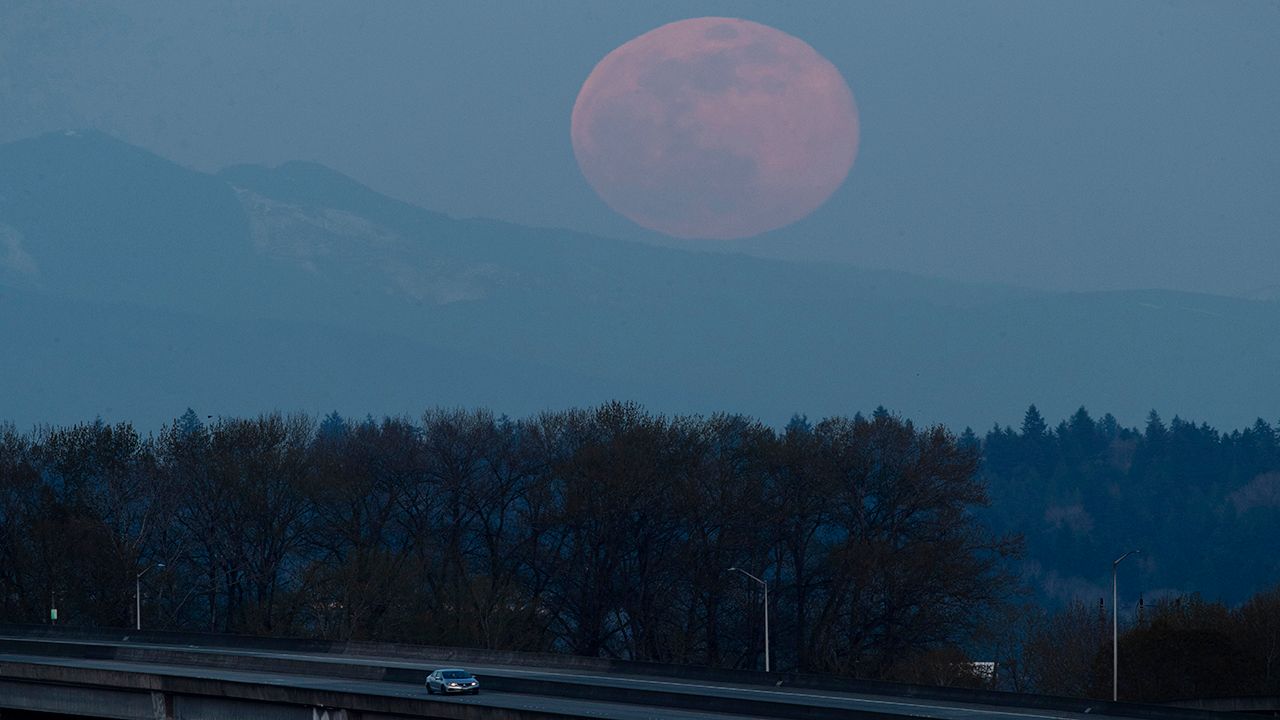 The supermoon creates a breathtaking view in Washington in April of 2020. Courtesy: AP/Ted S. Warren

Eta Aquarids Meteor Shower: This shower will peak from May 6-7 and produce up to 30 meteors per hour in the northern hemisphere. The comet Halley produces these meteors.

Mercury in May: Mercury will reach its greatest eastern elongation of 22 degrees from the Sun on May 17. Look for the 'swift planet' low in the western sky right after sunset.

Another Full Moon and Supermoon: Also known as the Flower Moon, the Moon will appear large and bright on May 26. It will be the second of three supermoons this year.

Total Lunar Eclipse: A lunar eclipse occurs when the Moon passes completely through Earth's dark shadow, or umbra. The Moon will gradually get darker and then appear as a rusty, red color. People in western North America should have the best chance to view it.

Annular Solar Eclipse: This solar eclipse will take place on June 10. An annular solar eclipse is when the Moon is too far away to completely cover the Sun, resulting in a ring of light around the dark moon.

Unfortunately, the path will move over eastern Russia, the Arctic Ocean, western Greenland, and Canada, but areas across the northeastern United States, from New York and states east and north, will see a partial eclipse!

Caballero-Nieves states that the event "will last from sunrise until 9:00 a.m., so you may catch it for a few hours." How exciting!

First Day of Summer: This year, the June solstice will occur at 11:31 p.m. ET on June 21, marking the first day of summer for the northern hemisphere. The North Pole will tilt towards the Sun, and the Sun will travel over the Tropic of Cancer.

Full Moon and Last Supermoon: Known as the Strawberry Moon, the Moon will be full on June 24. It'll also be closer to Earth and look larger and brighter than usual, making it a supermoon.

Mercury in July: On July 4, Mercury will, once again, reach its greatest western elongation of 21.6 degrees from the Sun. This time, look low in the eastern sky before sunrise to see this hot planet.

Delta Aquarids Meteor Shower: This average shower will peak on July 28-29 and produce about 20 meteors per hour. However, we'll have a full moon around the same time, which could become a bit of a problem when trying to view the meteors. 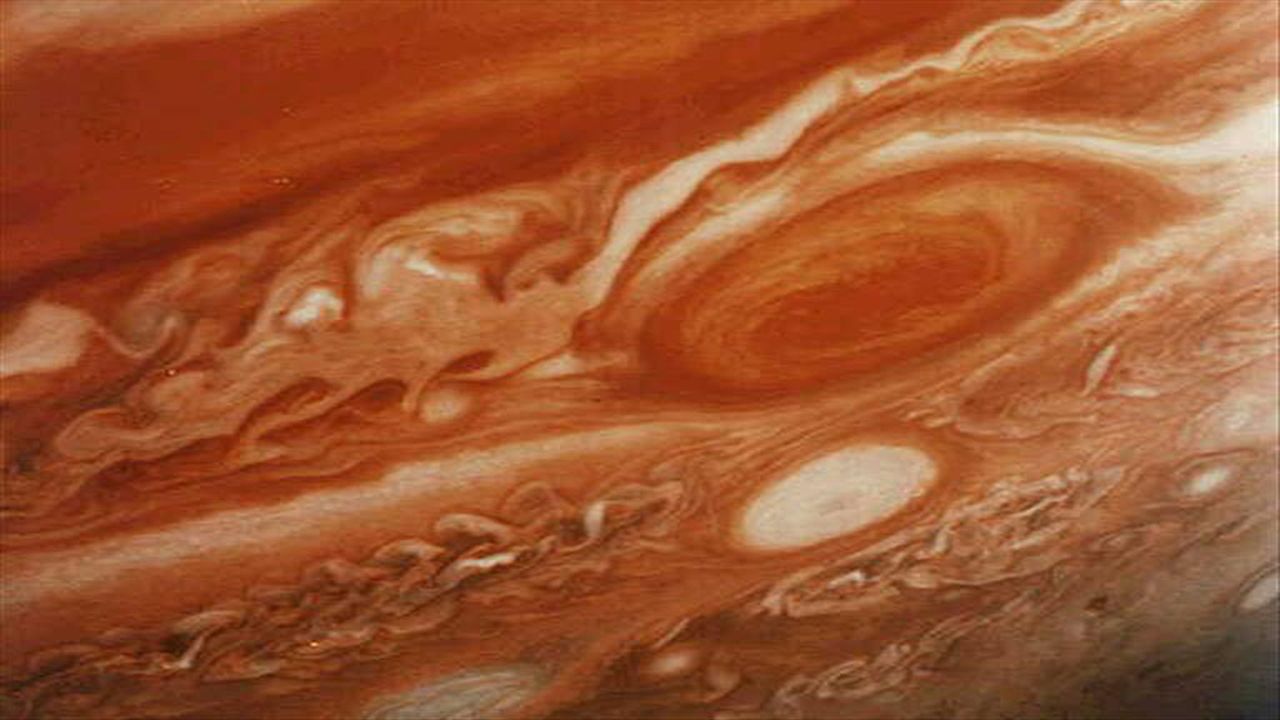 The Great Red Spot is a continuous storm on Jupiter, spanning over 10,000 miles and creating winds over 260 mph. Courtesy: AP

A View of Saturn's Rings: August 2 will be the best time to view this beautiful planet. Saturn will be closest to Earth, and the Sun will illuminate its face. With the help of a telescope, you should be able to see its rings and moons.

Perseids Meteor Shower: Known as one of the best meteor showers, this show will peak from August 12-13. It'll produce about 60 meteors per hour, and with the Moon in its waxing crescent phase, the meteors are consistently bright, beautiful, and easy to see.

Spot the Great Red Spot: Get a good view of Jupiter on August 19. The planet will be closest to Earth, making it a great time to see its Great Red Spot. You can also view the planet's clouds and four largest moons with the help of a telescope.

View the Blue: Neptune will be closest to Earth on September 14 and will most likely remain visible all night long. Although since it's so far away from Earth, it'll only appear as a tiny, blue dot with even the most powerful telescope.

Another View of Mercury: The good news for the Mercury enthusiasts is that you can see Mercury again on September 14 when it reaches its greatest eastern elongation of 26.8 degrees from the Sun. Look for it just after sunset in the western sky.

First Day of Fall: The September equinox will occur at 3:20 p.m. on September 22. We'll have equal amounts of day and night across the world as the Sun shines over the equator, marking the first day of fall in the northern hemisphere.

Draconids Meteor Shower: This is a minor meteor shower that produces 10 meteors per hour. Although, with the new moon, spotting them becomes a lot easier. It'll peak on October 10 and is an unusual shower. Look for the meteors in the early evening instead of the usual early morning.

Orionids Meteor Shower: A little better than the Draconids, this shower produces 20 meteors per hour and will peak from October 21-22. With the full moon, you'll only be able to see a few meteors if you're lucky.

The Last Show: Mercury's final, best viewing time will occur on October 25. Make sure to get those telescopes and look in the eastern sky before sunrise, as we won't see a better time to view this planet again until 2022.

Venus Returns: October 29 will be another great time to view Venus as it approaches Earth. The western sky after sunset is the best place and time to view it. For the astronomy buffs, in case you were wondering, this is when Venus reaches its greatest eastern elongation of 47 degrees from the Sun.

Taurids Meteor Shower: Dust grains of an asteroid and the debris of a comet combine to produce this meteor shower. It is a long-running shower that lasts from September 7 to December 10, peaking on November 4-5. It only produces about 5-10 meteors per hour, but the new moon should help you see those meteors a little better.

Uranus: This blue and green planet will be closest to Earth on November 5. With a powerful telescope, you'll be able to see a tiny blue-green dot. Sadly, it is too far away to see any features.

Leonids Meteor Shower: Another average shower, this show will peak from November 17-18, producing up to 15 meteors per hour. An interesting tidbit about this shower is that it has a cyclonic peak every 33 years where it produces 100s of meteor per hour. Although the last time this happened was in 2001, so we'll have to wait until 2034 to see this spectacular event again.

Partial Lunar Eclipse: On November 19, all of North America gets its chance to view this partial lunar eclipse. Part of it will darken as it passes through part of the Earth's shadow. 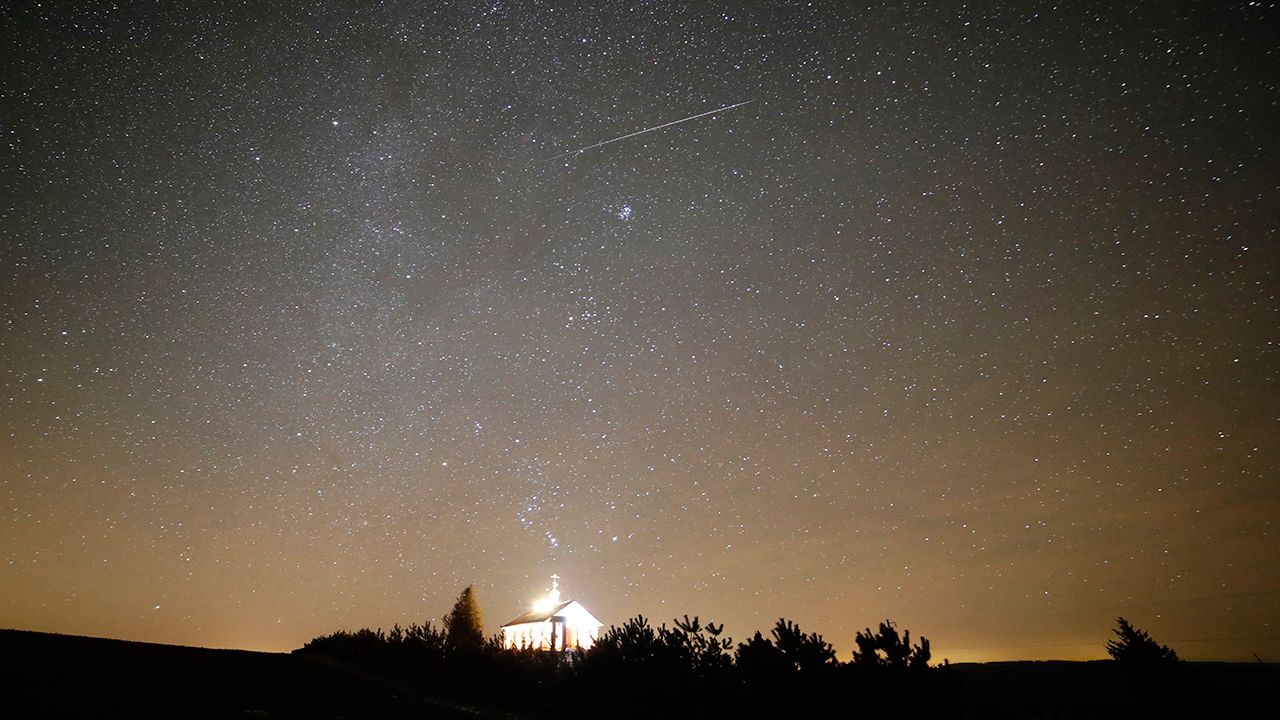 The Geminids meteor shower produces over 100 meteors per hour at its peak. Courtesy: AP/Sergei Grits

Geminids Meteor Shower: Welcome to the best meteor shower of every year. Peaking from December 13-14, this shower will produce 120 multicolored meteors per hour. Although the Moon will block out the more faint meteors, you should still be able to see many of them, making for a great show. Bundle up and head outside after midnight for the best viewing time.

First Day of Winter: On December 21, the winter solstice will occur at 10:58 a.m. ET, marking the first day of winter. The South Pole will tilt towards the Sun, and the Sun will be at its southernmost position in the sky.

Ursids Meteor Shower: The final show of the year will be the Ursids Meteor Shower. Although it is a minor one, producing 5-10 meteors per hour, and the Moon will be almost full and bright, you should still be able to spot a few in the night sky.

If you're trying to view a planet, it might be a little tricky differentiating it from a star. Caballero-Nieves explains "planets are typically brighter than stars. Stars also twinkle (this is called scintillation. Stars will change a little in brightness and even color), and planets do not."

"Finally, if you look at a planet over several nights or months, you will notice that it moves with respect to the stars near it. That’s where the Greeks gave the planets their names, which means wanderer."

If you want to view all these heavenly events this year, head to a dark area away from city lights.

It also doesn't hurt to buy a telescope, either. What kind of telescope should you buy?

Hopefully, you see some wonderful views this year!