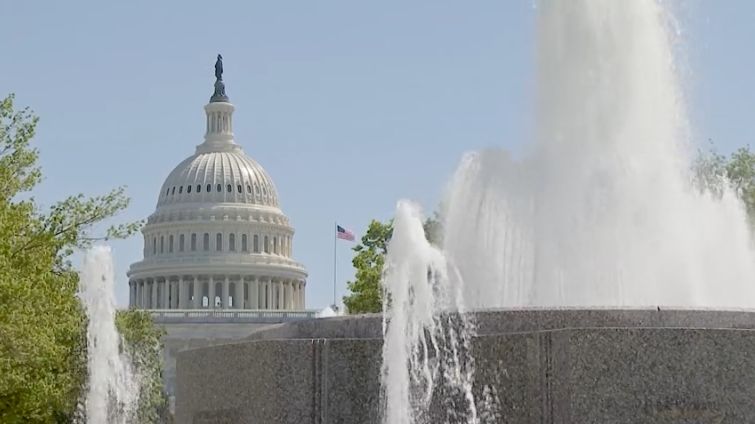 WASHINGTON — An armed man was arrested Wednesday near the home of Supreme Court Justice Brett Kavanaugh. Police charged the suspect with attempted murder, saying he had traveled from California to kill Kavanaugh.

This happened less than a week after retired Wisconsin Judge John Roemer was shot dead in his home. The incidents are renewing a push on Capitol Hill to protect members of the judiciary in Washington and around the country.

“House Democrats must pass this bill and they need to do it today,” Senate Minority Leader Mitch McConnell said on the Senate floor on Wednesday. “No more fiddling around with this. They need to pass it today.”

McConnell was demanded the swift House passage of the Supreme Court Parity Act one month after it passed the Senate unanimously. The bill would provide around-the-clock security for families of Supreme Court justices.

“Judges have always felt sensitive and vulnerable,” Robert McCrie, professor of security management at the John Jay College of Criminal Justice said. “But in the environment we're in at the present time, it's like something we've never seen before."

The hold up in the House, according to Majority Leader Steny Hoyer, is a belief those protections should be extended to “the family members of the clerks and staff who support them.”

This morning’s disturbing reports are exactly why the Senate unanimously passed a Supreme Court security bill weeks ago. But House Democrats have inexplicably blocked it. House Democrats need to stop their blockade and pass this uncontroversial bill today. pic.twitter.com/wd8UB5RDvm

But another judicial protections bill is being stalled by one Republican in the Senate. Sen. Rand Paul, R-Kentucky blocked the unanimous passage of the Judicial Security and Privacy Act. It would limit the release of the home addresses and other personal information of active and retired federal judges and their families.

“That seems reasonable, if it's possible to do that,” McCrie said. “However, the bill also opens up other issues because it's going to be up to the U.S. Marshals Service to decide exactly how to implement this. And it could go far beyond simply protecting electronic information access.”

Sen. Paul is standing in the way of the bill proceeding to the House because he wants to expand that right to privacy for lawmakers.

“If recent years have taught us anything, it’s that members of legislative branch also need protection,” Sen. Paul said on the Senate floor in May.

“However, as I said a minute ago, it's possible that the U.S. Marshals will suddenly decide that every member of Congress deserves to have a pistol-packing agent with him or her. And that's going to create an environment such as what we've never seen.”