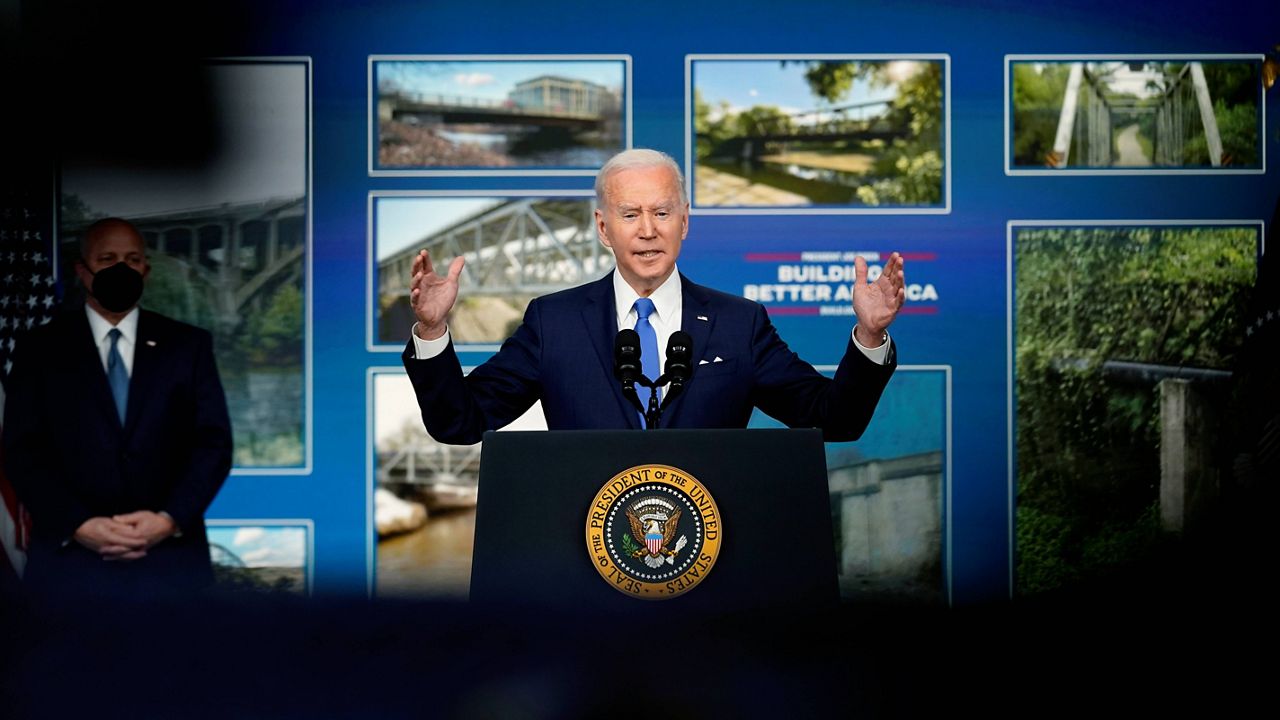 President Joe Biden speaks about the Bipartisan Infrastructure Law at the South Court Auditorium in the Eisenhower Executive Office Building on the White House Campus on Friday. (AP Photo/Andrew Harnik)

Biden admin. announces $27B investment to repair 15,000 bridges: 'It's all about fixing the problem'

The Biden administration on Friday launched a new effort to repair nearly 15,000 bridges across the United States using funds from the Bipartisan Infrastructure Law.

The Bridge Replacement, Rehabilitation, Preservation, Protection, and Construction Program will provide $26.5 billion to state governments, as well as Washington, D.C., and Puerto Rico, over the next five years, with a separate $825 million for tribal governments in the same time frame.

The funds will also come with an incentive for use in “off-system bridges” owned by local governments. While governments typically must match federal funding by up to 20% of the total, the funds from the Bridge Formula Program can be used for the entirety of the cost of repairing locally owned bridges.

Administration officials define “off-system bridges” as smaller bridges for smaller roads, which are not included in the federal highway system.

“These are the bridges that are often overlooked when decisions are being made, but they are essential for small towns, rural towns, farmers to get their products to market, small businesses to be able to serve customers,” President Joe Biden said in a speech from the White House on Friday.

“This is an investment that is going to help connect entire towns and regions to new opportunities,” the president added. “With this investment, we're sending the message to those communities and the people who call them home (that) you matter.”

“The Federal Highway Administration is encouraging the funding to be used toward improving the condition of existing bridges wherever possible,” officials added. “But when faced with the choice to build new bridges, we're encouraging them to address equity, barriers to opportunity, challenges faced by individuals and underserved communities and rural areas and restoring community productivity.”

According to data from the Federal Highway Administration, there are 618,456 bridges across the United States. Of them, 45,023 — or about 7.2% — are considered structurally deficient, and nearly 231,000 of them — more than a third — are in need of repair, according to a report from the American Society of Civil Engineers.

The ASCE bridge report, released as part of a 2021 Infrastructure Report Card, suggests that annual government spending to repair bridges should increase to $22.7 billion from $14.4 billion — figures taken from FHA’s 2019 Status of the Nation's Highways, Bridges, and Transit report.

Friday marks 60 days since Biden signed the $1 trillion bill into law, which provides $550 billion over the next five years to fortify nearly every traditional aspect of U.S. infrastructure — including roads, bridges and freeways — plus a few newer efforts, such as increasing access to high-speed internet and preparing for the effects of climate change.

After Republicans criticized a speech by Biden earlier this week as divisive because the president referred to GOP lawmakers opposed to voting rights legislation as domestic “enemies,” Biden emphasized Friday that the infrastructure was bipartisan — 13 House Republicans and 19 GOP senators supported it.

“It's all about fixing the problem,” Biden said. “I ran for president to unite the country. This bipartisan infrastructure law I signed two months ago unites us around things we all depend on. Whether you're in rural Kentucky or downtown Philadelphia, you should be able to turn on a faucet and drink clean water. Students should be able to get the internet if they needed to do their homework at home instead of having to drive to a fast-food parking lot.”

And the president acknowledged the growing criticism about his administration, which saw the Supreme Court block its vaccinate-or-test mandate for large businesses Thursday and is struggling to advance voting rights legislation and its sweeping Build Back Better social and climate package in Congress.

“There's a lot of talk about disappointments and things we haven't gotten done — we're going to get a lot of them done, I might add — but this (infrastructure) is something we did get done. And it’s of enormous consequence to the country.”

Also Friday, Transportation Secretary Pete Buttigieg visited Philadelphia to tout the “historic investments” made possible by the infrastructure law. He delivered a speech at the foot of the Martin Luther King Jr. Bridge that crosses the Schuylkill River. The bridge was closed to vehicle traffic in early 2020 to repair structural deterioration of its deck and supporting steel beams.

“Dr. Martin Luther King often spoke of building bridges between all Americans,” Buttigieg said. “Both literally and symbolically, we have a lot of bridges to repair as well as build."