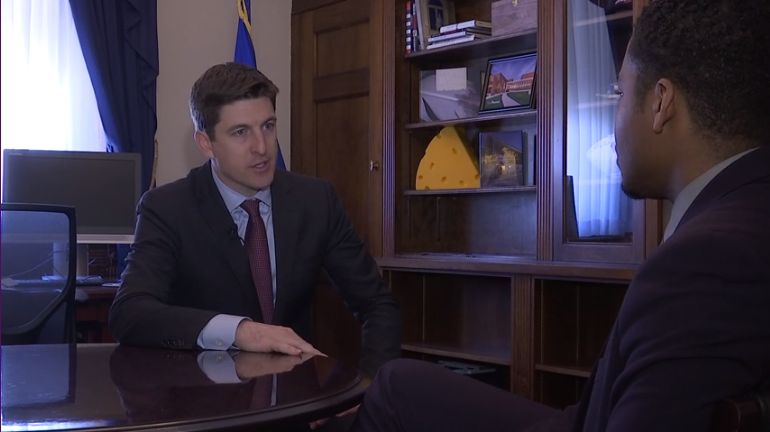 Freshman congressman reflects on his first three months in office

WASHINGTON (SPECTRUM NEWS) — Wednesday marked three months since Rep. Bryan Steil, R-Janesville was sworn in to the House of Representatives.

“I arrived in the middle of a shutdown,” said Rep. Steil. “I saw the dysfunction of Washington right there on day one. And then you sit down and say, how do we start working together to get stuff done?”

The government has since reopened yet Congress remains divided.

The chances are slim for a Republican-sponsored bill to make it to the floor for a vote in the Democrat-controlled House.

So Rep. Steil is hoping to find common ground with his colleagues on both sides of the aisle to help push through his legislative agenda.

“How do we find those areas of agreement, focus on those, work on those and try to produce results on behalf of the American people,” he said.

That spirit of bipartisanship continued when he and the other seven U.S. representatives from the state advocated for Wisconsin’s SeniorCare program.

They sent a letter urging the Department of Health and Human Services to extend the service that provides medicine at a lower cost for folks age 65 and up.

It was set to expire last month.

“I’m proud to be a member of the Wisconsin delegation no more so than in the moments where we do come together to really focus on the issues that are affecting the people of Wisconsin across any partisan divide,” he said.

So far, he’s cosponsored 16 bills introduced in the 116th Congress and half of them were sponsored by Democrats.

But he’s also aware there will be hard lines drawn on some issues.

The biggest one he’s faced so far is the partisan split on the Green New Deal.

“It clearly wasn’t written by somebody who spent any time in the state of Wisconsin,” said Rep. Steil. “I think that’s pretty clear. I think when you see these extreme bills coming out I think there’s a need to have a discussion, a frank conversation with the American public as to what direction we want to take our country.”

He wants voices from the Midwest to be included in that conversation.

“We have had an ability to bring rational, thoughtful, solutions to the table and that eventually gets rewarded,” he said. “That doesn’t always get you on TV but that gets you rewarded on a policy perspective because that’s what people are actually looking for in the end: How are we actually going to address some of the problems we’re facing?”