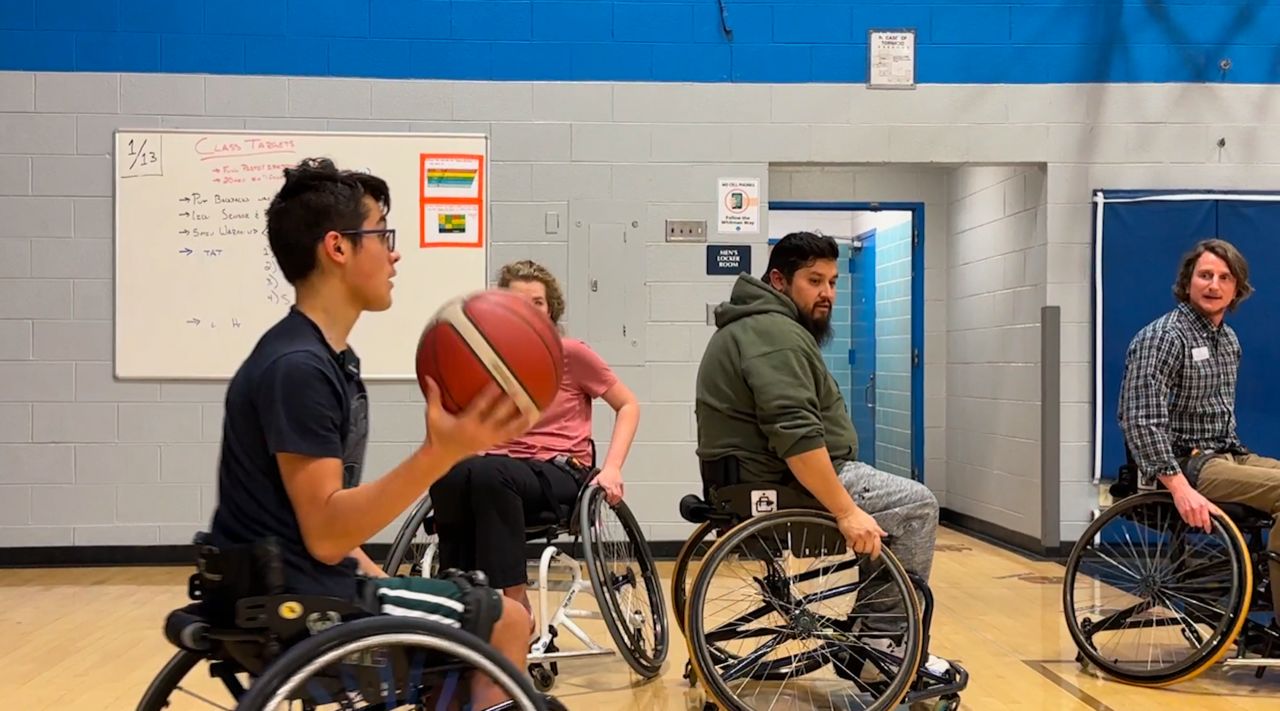 “I just come here to help teach and play myself because I am a player already, so I just come here, and it’s kind of like extra practice for the most part,” Quintero said during the event at Whitman Middle School.

He started going to adaptive programs with The Ability Center about seven years ago. That’s when he lost mobility with his left leg.

“All I know is that I had like a cold-type sickness, and then it just, pretty much a virus, just sat there and killed the stuff in the left leg,” Quintero recalled.

He was always into sports as a young kid, so after his paralysis, he still wanted to play. He said it was tough at first.

That’s why Damian Buchman founded The Ability Center. He wanted to give people of all abilities the chance to be fit, active, and play.

“When we say play, our ultimate goal is that everyone gets the chance to play together, disability or not,” Buchman said. “Physical disability, intellectual disability, no disability — we don’t really care. We just want to provide an opportunity for the community to play.”

Starting this organization hit close to home for Buchman. When he was in middle school, he was diagnosed with bone cancer in his right leg.

He was in remission for seven months, but just one month into his freshman year of high school, the cancer spread, and he was diagnosed with it in his left leg.

He’s able to stand and walk, but unable to run or jump, which is needed in typical basketball. Adaptive gyms and programs existed when he was growing up, but he didn’t know about it.

He said he wanted to be the reason kids in similar situations today know about these programs.

“Physicians were literally telling my mom to take me home and let me kind of pass peacefully the second time I was diagnosed,” Buchman said. “Nobody expected me to survive. So, for me, all of this is about honoring my survivorship, and what I just call the new normal.”

The Ability Center holds open gyms in Wauwatosa once a month. They hold more in other places around the Milwaukee area thanks, in part, to a partnership with PNC Bank and Dick’s Sporting Goods.

They also recently launched a 3-on-3 wheelchair basketball league, with a new season starting in April.

Buchman and Quintero said allowing everybody to participate, whether the wheelchair is needed or not, opens the door for more inclusivity.

As a freshman in high school, Quintero isn’t letting his disability hold him back. He’s aiming to become a Paralympic athlete, something Buchman said he thinks will definitely happen.

That’s the message Buchman wants to send, opening doors to endless possibilities through a level playing field in an open gym.

To see where the next open gym will be held, or to learn more about The Ability Center, click here.