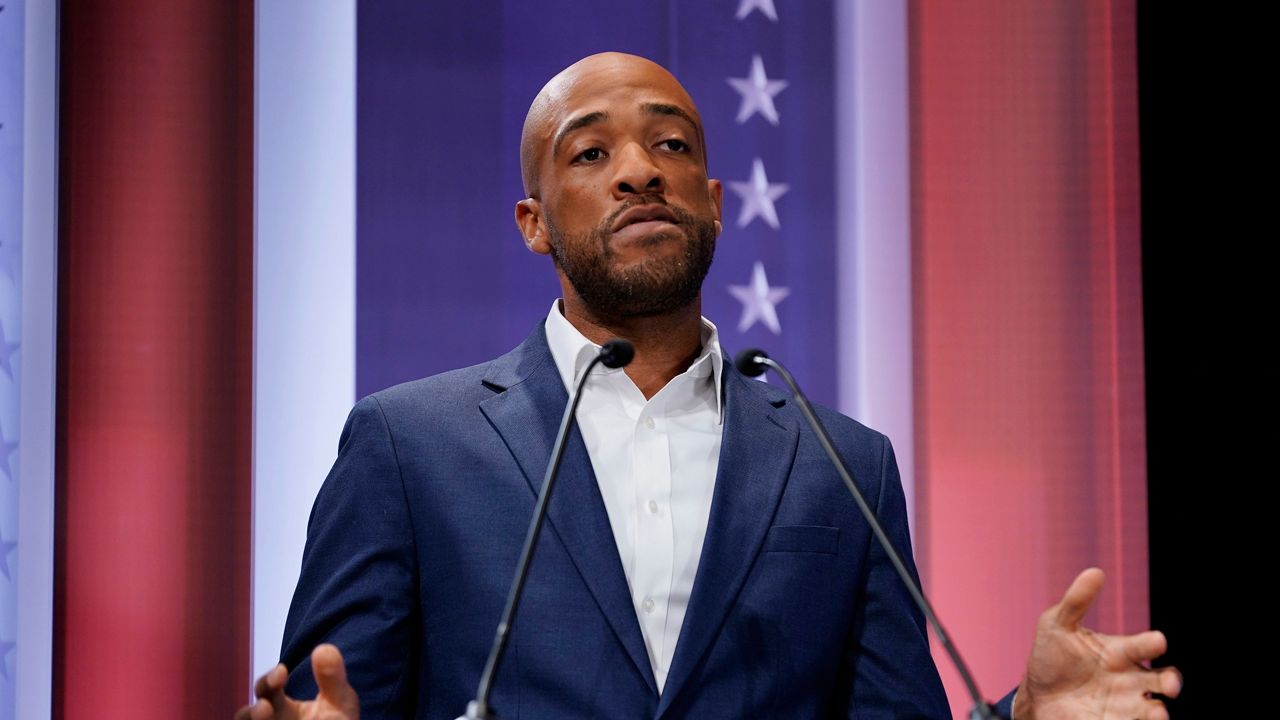 MILWAUKEE — A crowd gathered inside the John Marshall High School gym in Milwaukee; it was just like old times for Mandela Barnes.

Twenty years ago, a crowd cheered him on as he took the court with the Marshall Eagles. On Saturday, they cheered for Barnes in his role as the state’s lieutenant governor, and Democratic nominee for the U.S. Senate.

“Luckily, I’m not playing basketball because it might be a different outcome than what we’re looking for this November,” Barnes joked.

Scanning the crowd, he locked eyes on a familiar face. “Hey Chase,” he said, interrupting his own speech. “I know your name, Chase.” Barnes then called out to a little girl, holding a hand-drawn sign that read “Mandela is our fella!” 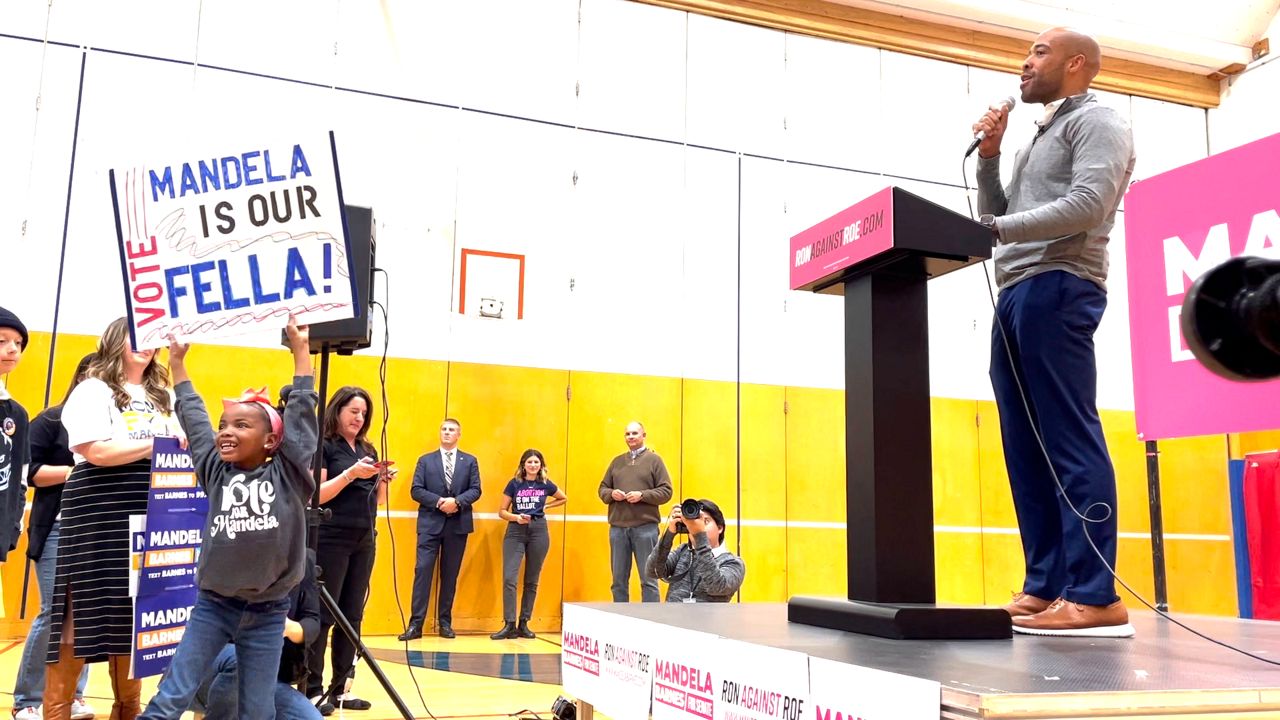 “This is for the Chases of the world, because she should be able to make her own choices,” he said.

If it wasn’t already clear from the pink backdrop behind him, or the signs around him reading, “Ron Against Roe,” it was now: With a month to go before the election, Barnes is making abortion rights a singular focus of his campaign to unseat Republican Sen. Ron Johnson.

It’s our job to make sure that Chase – and every single little girl – grows up in a world where they ALWAYS get to make decisions about their own health. pic.twitter.com/tdvb8GVdNI

“The reality is, half the population, especially here in Wisconsin, lost the right,” Barnes said. “We’re subject to a 1849 criminal abortion ban that was triggered with the Dobbs decision. This is something that Ron Johnson celebrated.”

In June, in Dobbs vs. Jackson Women’s Health Organization, the Supreme Court overturned the constitutional right to an abortion. The decision gave each state the right to severely restrict or ban the procedure. In Wisconsin, that meant a pre-Civil War law banning abortion was in effect, although the state’s Democratic governor and attorney general said they would not enforce it.

Angered by the decision, Democratic voters turned out in large numbers to defeat a statewide referendum in Kansas to ban abortion. The backlash then helped a Democrat, Pat Ryan, notch an unexpected victory in a special election for a vacant U.S. House seat in upstate New York.

In September, Barnes launched a statewide campaign focusing on the Supreme Court’s decision. Branding the tour “Ron Against Roe,” Barnes highlighted Johnson’s previous opposition to abortion rights. Last week, he hammered the point again, during his first and only debate with Johnson, repeatedly slamming his Republican opponent for calling the Dobbs decision “a victory.”

“Abortion is one issue, but this is a smaller piece of the larger puzzle of freedom,” Barnes said, adopting an argument Ryan used successfully in his House race. “People are tired of politicians wanting to step in and make the most difficult, most intimate and most challenging choices for them.”

During last week’s debate, Johnson cemented his own pivot, calling for a referendum in Wisconsin to determine if abortion should be legal, an idea he first floated last month.

“This is a profound moral issue and you’re trying to balance the rights of the mother — which I fully acknowledge — and the rights of an unborn child,” Johnson said. “And the question that we should decide by referendum — and it should be we, the people deciding this is — at what point does society have the responsibility to protect the life of an unborn child?”

But across his two terms in Congress, Johnson has repeatedly co-sponsored bills to ban abortions nationwide after 20 weeks of pregnancy, and has co-sponsored legislation to extend constitutional protections to the unborn.

“There’s clear evidence of a pivot here, because that hasn’t been the senator’s position in the past,” Charles Franklin, the director of the Marquette Law School Poll, said.

“Wisconsin’s a state that does not allow citizen-initiated referenda. They have to be approved by the state legislature. Governor [Tony] Evers proposed a move on referenda, but the legislature refused to take it up just this last couple of weeks. So in that sense, Johnson proposing a referendum is not a very viable strategy from the point of view of how referenda get done in the state," Franklin continued.

Barnes’ focus on abortion is a strategy Democrats in other tight races are using, but some strategists have questioned whether it is enough.

“A lot of these consultants think if all we do is run abortion spots, that will win for us. I don’t think so,” veteran Democratic strategist James Carville told the Associated Press.

“It’s a good issue, but if you just sit there and they’re pummeling you on crime and pummeling you on the cost of living, you’ve got to more aggressive than yelling abortion every other word," Carville continued.

Barnes said he doesn’t believe his targeted messaging will cost him the election.

He said he’s also talking to voters about crime, specifically his support for giving officers more tools to address non-emergency crisis situations. Following the death of George Floyd that triggered protests and subsequent riots across the country, Barnes called for statewide accountability of law enforcement but put the onus on the state lawmakers to work together for a fix.

“The legislature should meet to pass bills aimed at creating better police-community relationships,” Barnes said in an interview with Spectrum News in June 2020.

But Sen. Johnson has been hammering the lieutenant governor on the issue for months, running ads that show a picture of Barnes holding a t-shirt that reads, “abolish ICE,” and has been accusing his opponent of wanting to defund the police. Barnes dismissed the attacks.

“Ron Johnson [during the debate] admitted that I don’t support defunding the police. He said it out of his own mouth,” Barnes said.

Johnson claimed while Barnes has avoided saying that phrase, he supports policies that would do it.

While on the trail, Barnes steered the conversation back to the Supreme Court’s ruling. He invited Planned Parenthood president Alexis McGill Johnson to stump with him last weekend.

“He’s never once wavered on his support for accessing abortion, for keeping our freedoms and I just think that he’s going to be a tremendous champion,” McGill Johnson said.

Nine-term Democratic Rep. Gwen Moore, who also joined Barnes at his high school rally, said she agreed with the campaign’s focus on abortion. The Milwaukee congresswoman revealed in a January Twitter thread that she had an abortion when she was younger. She said this issue is personal.

“I think for too long the trials and tribulations of motherhood, and a need for abortion care, the need for healthcare, and maternal support for Black women is too often not been the main topic for anybody,” she said. “This is an issue that all women and Black women can own for their own preservation of themselves and their families.” 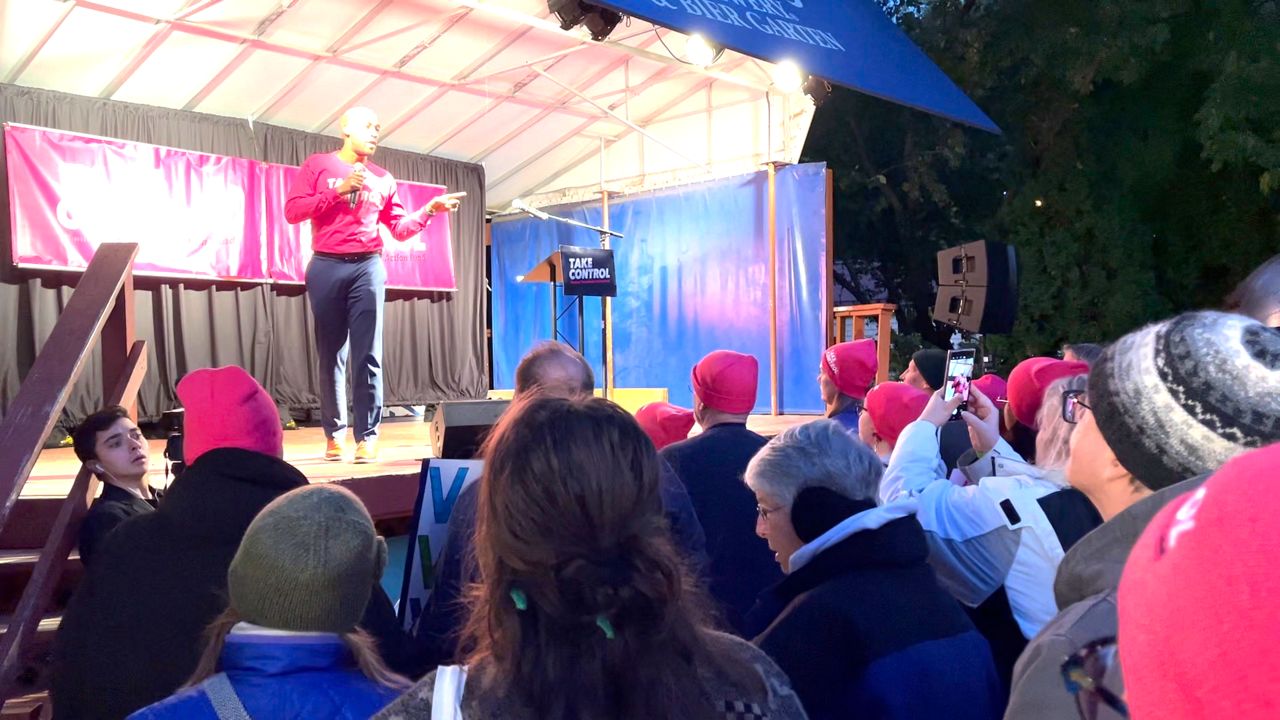 Barnes traveled to Middleton, Wisconsin, just hours after his appearance at his old high school for an identical rally at a local brewery. This time, he was joined by Gov. Evers and Wisconsin Attorney General Josh Kaul. Many in the crowd wore pink hats in solidarity.