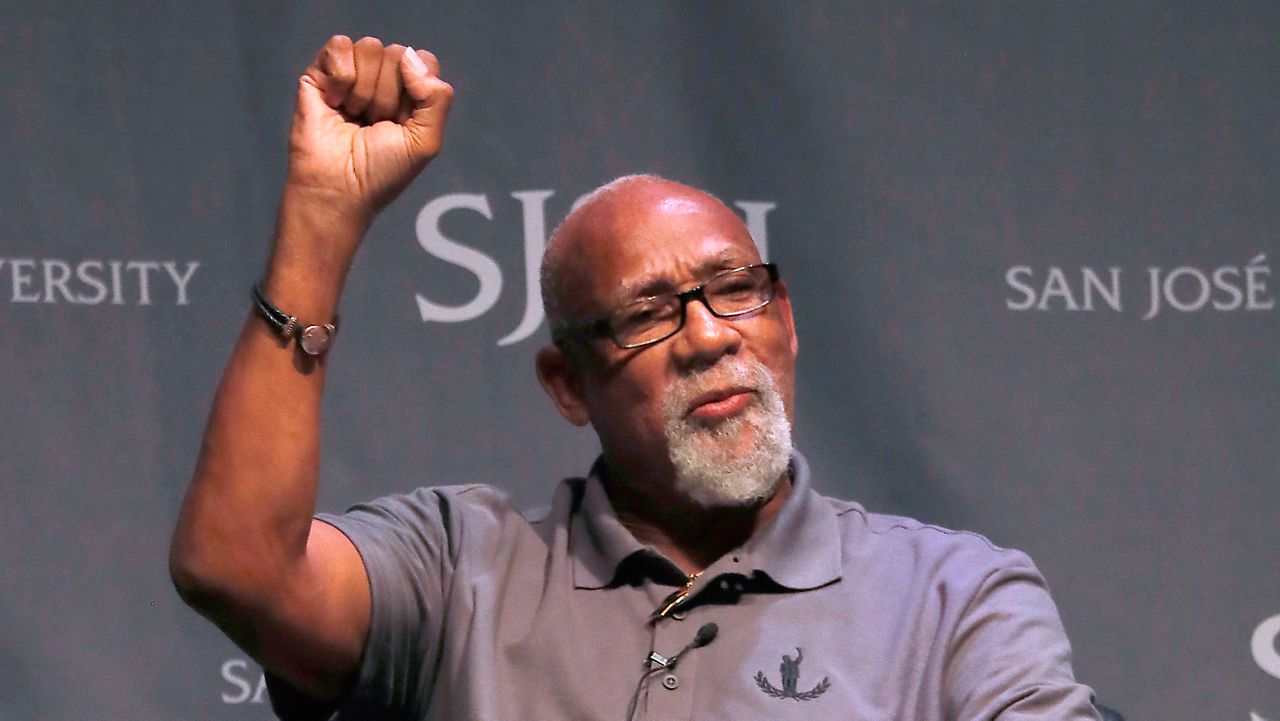 In this Oct. 17, 2018, file photo, 1968 Olympic athlete John Carlos raises his fist as he speaks about his experience as Olympians who participated in Mexico City in 1968 during the 50th Anniversary of the Defining Moment in Sports Social Activism Historic Town Hall at San Jose State University in San Jose, Calif. (AP Photo/Tony Avelar, File)

A fist in the sky: Athlete John Carlos has always stood for human rights

John Carlos and Tommie Smith became part of American history when they raised their fists on the medal stand at the 1968 Summer Olympics in Mexico City. They were letting everyone know that their country could do better.

Carlos was in Milwaukee last week to be honored by the Fellowship Open. What was a shocking protest at the time is now seen as a courageous action that has inspired people for generations. 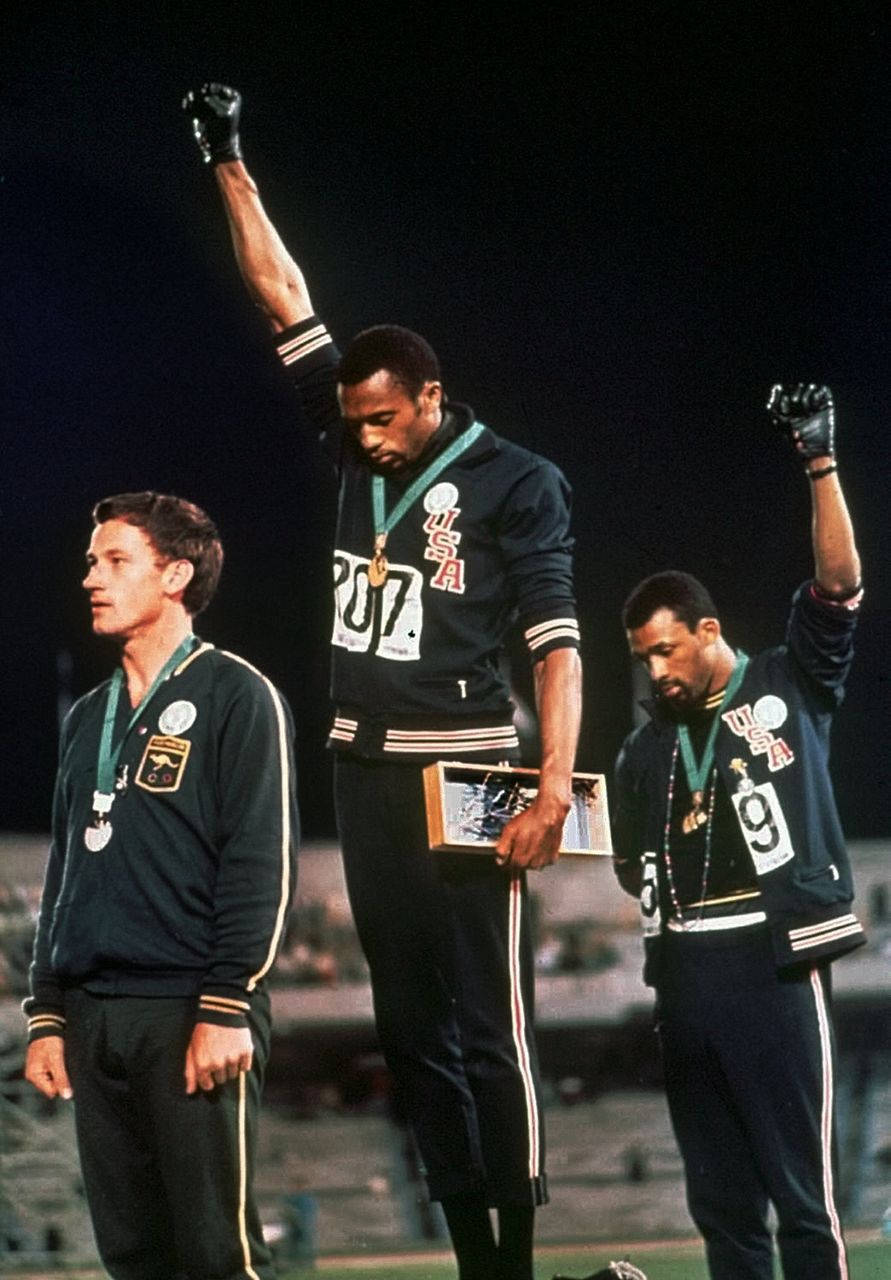 In this Oct. 16, 1968, file photo, extending gloved hands skyward in racial protest, U.S. athletes Tommie Smith, center, and John Carlos stare downward during the playing of national anthem after Smith received the gold and Carlos the bronze for the 200 meter run at the Summer Olympic Games in Mexico City. (AP Photo/File)

While he was in town, I talked to Carlos for Spectrum News 1.

Dennis: Dr. Carlos, let’s go back to Mexico City in 1968. You’re about to go on the victory platform after the 200 meters. How was it decided with you and Tommie, the Black power tribute?

Dr. Carlos: The only Black power actually was our Black fannies running down that track. This was a project for human rights. Without a doubt, that was our logo. Our umbrella that we stood on was the Olympic project for human rights. I came to the conclusion that I was disenchanted with the fact that the boycott was called off for 1968. God came to my mind and said, “John, you can stay home, but the question is when they put someone in your place and they reach the victory stand, will you be represented the way you would like to be represented?”

When I got on the team, I was still disillusioned for the fact that it looked like everybody’s lost focus in terms of what this boycott was initially about. So I approached Mr. Smith, and I said, “man, I’m disenchanted by the fact the boycott was called off. I’d like to make a statement. What’s your take on that?”

He said, “I’m with you.” And when he said that, then we came together and started bringing different artifacts that we had to bring to the table. Mr. Smith had the gloves. I had the beads. He had a black scarf. I had a black shirt to cover up my USA Jersey. We were both wearing black socks. We took the Puma shoe out there, probably because the Puma shoe was the most advantageous to our careers at that particular time.

Dr. Carlos: Let’s go to the athletes first. I would say that many athletes haven’t realized that this is not in the moment, this is supposed to be in the movement. You can come out and think that you are going to be Black, or you could be Black conscious and it turns into a fad. You know something that’s going to be there… it is not going to have longevity; it is just there, and then it’s gone.

Dennis: That’s interesting. I will follow up on that because I was going to go that direction. You’re now 77 years old. When you travel the country, do the younger athletes know what you did?

Dr. Carlos: Many know what I’ve done based on the fact that, a lot of the time, they were in school. We came out in the textbooks and the picture was there. A lot of them are intrigued because they like to ask questions. A lot of them are very inquisitive and then some of them don’t recognize the name John Carlos. But when you put the fist up in the sky, then they all recognize.

Dennis: This is a big picture question. Race relations in 2022 in the United States. How would you assess it?

Dr. Carlos: We’re in a quandary, and the only way it’s going to come together is when people come together at the round table and start to have some discussions about this math equation that is before us. Realize that no one’s going to solve this but us. If we don’t solve it soon, the elements in life are going to take the main focus. When I say the elements, I’m talking about tornadoes, natural disasters, drought, fires; all of these things are going to come on the United States or the world, for that matter. In the midst of us trying to find out who we are, what our purpose is here on this earth.