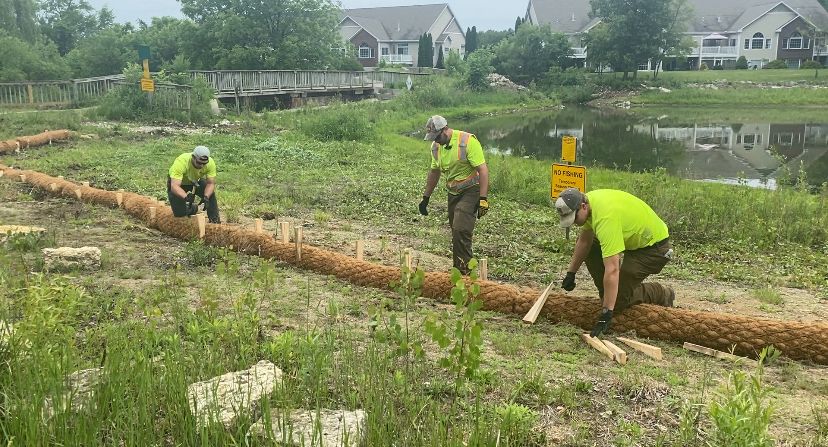 Whitewater works to restore two of its lakes

WHITEWATER, Wis. — The city of Whitewater is working on a multiyear project to restore Trippe and Cravath lakes.

Jacob Damm is a project ecologist. He and his team installed coir wattles near Trippe Lake.

“The purpose of the coir wattles is to reduce wave action along the shoreline and absorb wave energy,” said Damm.

Damm’s mission is to secure the shoreline. He works for “Field and Stream Restoration.”

He said the city hired the company after the lakes were dredged out earlier this year.

“Historically, the sediment from the surrounding watershed has flown into the lakes, so what we are trying to do is reduce any soil erosion back into what we have already tried to fix,” said Damm.

Eric Boettcher is the Parks and Recreation Director for Whitewater. He said this work needs to be done for several reasons.

“We wanted to freeze out those invasive species and then also the dredging portion was to dredge a navigation channel so to allow for deeper water for more, like the recreation kayaking,” he said. “And then overall just get a handle of reducing all of the vegetation that has grown in here.”

Boettcher believes this is how the city will get the most out of the Trippe and Cravath lakes that are near downtown.

“The lakes are a treasure for the city of Whitewater, so we have a lot of people that come to town to use them,” said Boettcher.

This is why Damm takes great pride in making sure this happens.

“I just had a unique interest for the natural and how it works and restoring the natural world to pre-settlement conditions,” said Damm.

For Damm, that means enjoying the beauty of the city’s lakes the way they were meant to be enjoyed.