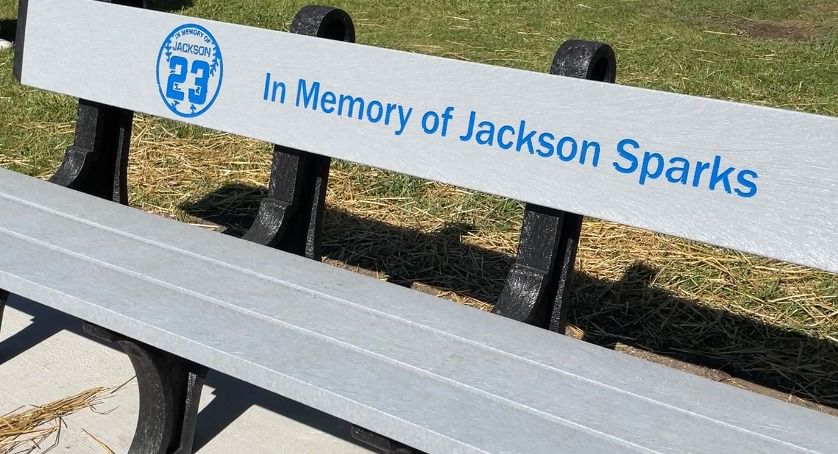 MUKWONAGO, Wis.— Friends and family came together to remember a life taken too soon Thursday evening.

The Makwonago Lion’s Club donated a bench dedicated to 8-year-old Jackson Sparks who was killed in the Waukesha Christmas Parade tragedy.

Rich Shrank with the Lion’s Club said when they heard about the tragic news they knew something had to be done. That’s when the Lion’s Club contacted Jackson’s family about dedicating a bench in his honor.

“We’re happy to help the community heal with this,” said Shrank.

The bench sits outside of Field Park in Makwonago. It reads “In Memory of Jackson Sparks” with a baseball and his jersey number of 23. Jackson enjoyed playing on his baseball team, the Waukesha Blazers 8U. He was walking with his team in the parade when he was killed. His older brother Tucker was also walking alongside him and was one of the 60 people injured.

“It’s a nightmare for a parent to be doing something like a Christmas parade and walking with your baseball team and the turn of events,” said Wendy Butz. “Just horrific.”

Wendy and Scott Butz were in attendance at Thursday’s bench dedication. Their son is good friends with Tucker. They said the whole situation is devastating.

“He was really sad for his friend Tucker,” said Scott Butz. “He tried to do whatever he could. A lot of times he didn’t know what to say but he helped tucker out when we went back to school.”

After the dedication, Jackson’s brother Tucker threw the first pitch for the local game.

Since Jackson’s passing, a foundation was created in his honor. The Jackson Spark Foundation’s mission is to continue love, kindness and faith by granting baseball dreams to children in need.