A beautiful mind: Brain cancer diagnosis brings out the best in UW-Oshkosh student

OSHKOSH — When he got the grim news, Eddie didn’t panic. Didn’t even flinch.

This wasn’t your normal gut punch. It was uncommonly cruel.

Eddie Stuczynski was your typical 18-year-old college freshman, full of hopes and dreams and more than a tad excited about the future. But on this day it had to feel like ESPN’s Lee Corso was standing next to him, delivering those wretched five words: “Not so fast, my friend.”

“Honestly,’’ said Stuczynski of the day he was told he had brain cancer, “I was just like, ‘Oh.’ That’s all I remember.”

It would be just 10 days before doctors would cut open his skull for the first time, known in the medical world as a craniotomy, to remove a mass that was the size of a medium tangerine. 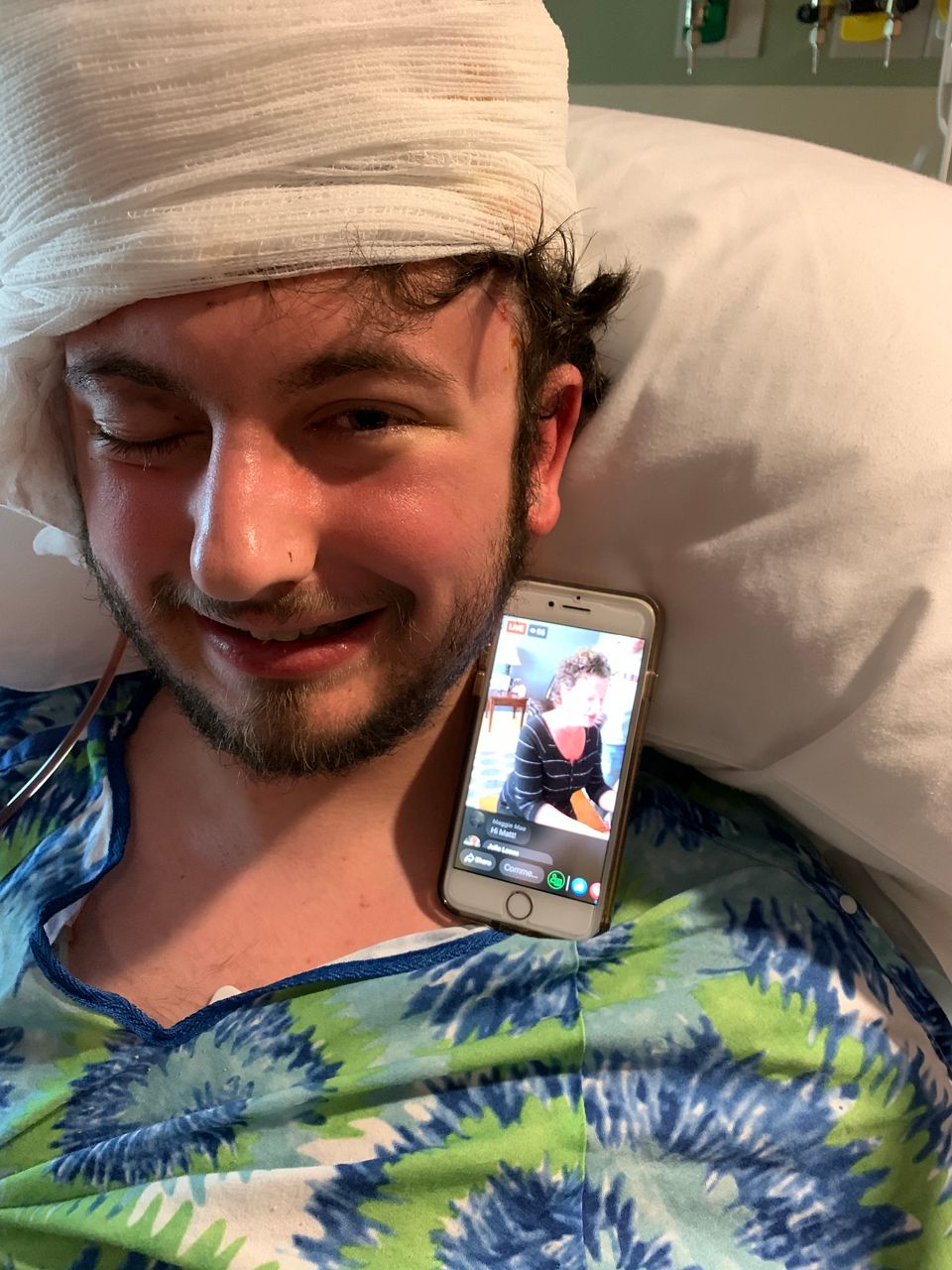 But Eddie didn’t mope. Didn’t have time. Too much stuff to do. He had to text his friends to tell them that if they texted him, he wouldn’t be able to text back for a while. Then he called his teachers at UW-Oshkosh. A music education major, the first call went to professor Drew Whiting, his academic adviser, saxophone teacher and someone he had known since his days at Neenah High School.

Whiting had lost his father to cancer the year before, and as a professor who prides himself on developing a personal connection with his students, this was devastating news.

But here was Eddie, on the other end of the phone, being Eddie.

“He was so optimistic,’’ said Whiting. “He said, ‘Oh, I’m going to get all my assignments done. …’ And I was thinking, ‘Man, you’ve got more important things to deal with at the moment.’’’

The once promising future Stuczynski was so eager for was now uncertain. The unknown, and all the trepidation that comes with it, was now part of the family. Stuczynski could sense that.

When he felt the right side of his face start to tingle, Stuczynski knew it was not normal. He called his mom, Lynn, and said he wanted to get it checked out. But this was March 2020, when COVID-19 was shutting down the world, so seeing a doctor for anything other than an emergency was impossible.

After describing to the doctor’s office what was happening, they called back and surmised it was likely a pinched nerve in his neck. Weeks went by, appointments continued to be rescheduled. Then Eddie’s right eye stopped functioning as normal, so they called again, informing them that, no, there would be no more delays. The next week, he had an MRI. They found a mass, and Lynn found herself in that inevitable place of hoping for the best while fearing the worst.

Surgery was scheduled at Theda Care Regional Medical Center in Neenah. When it was over, the doctor came out and found Lynn.

“He just grabbed my hand and squeezed it,’’ she said. “And he was like, ‘I’ve never seen anything like this before.’ And I knew.” 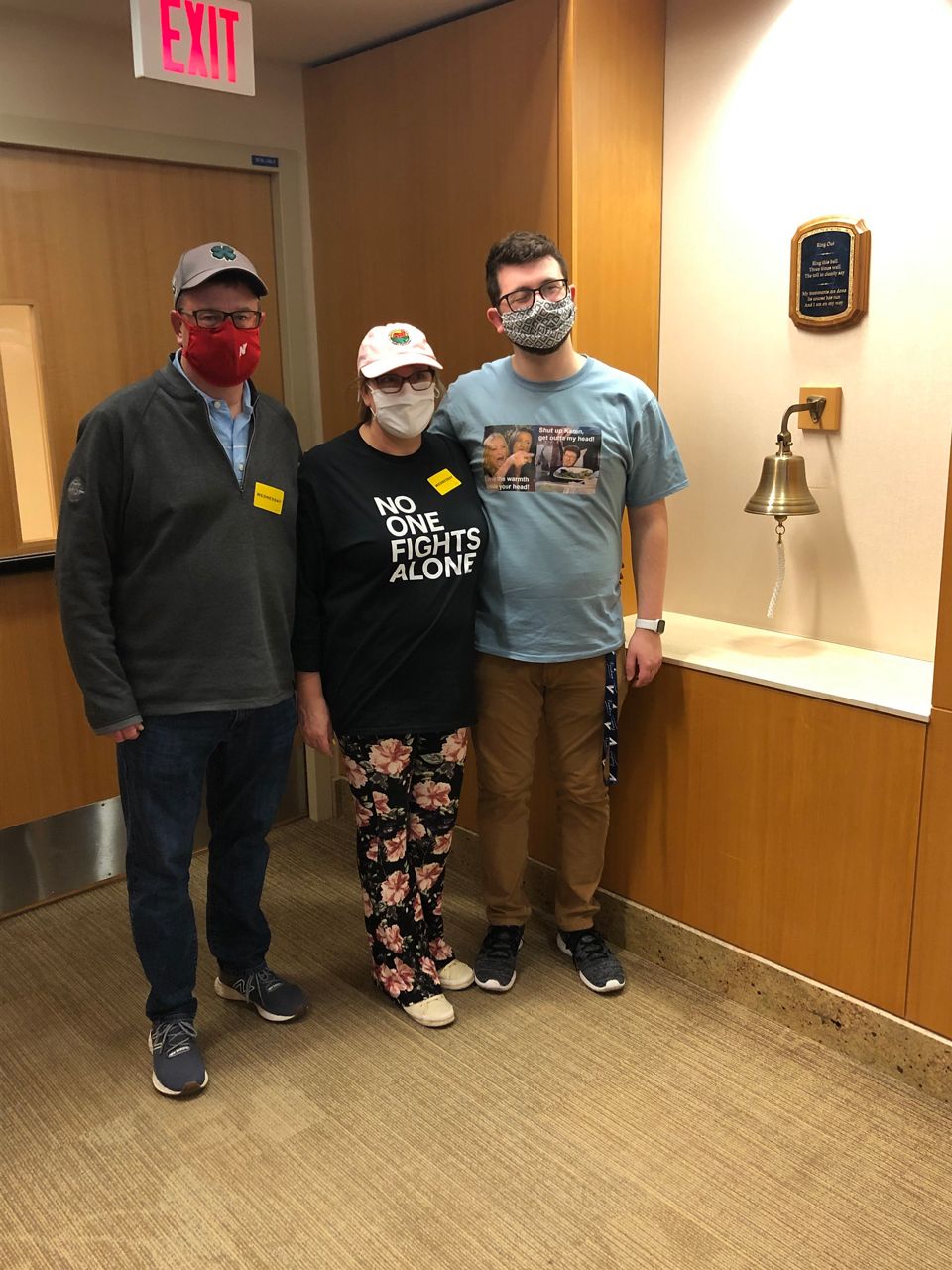 They diagnosed Eddie with myxoid chondrosarcoma, a rare, slow growing bone cancer that usually occurs in men in their 50s. But this mass was pressing against Eddie’s brain stem, and not all of it could be removed. It was just too dangerous. Eddie underwent a second surgery, and they removed more of the tumor, but not all of it. There would be a third surgery, this time at the Mayo Clinic in Rochester, Minn. While more of the tumor was removed, it was mainly to prepare Eddie for proton beam therapy, radiation treatment used to destroy tumor cells, using protons to send beams of high energy that can target tumors more precisely than X-ray radiation. And as part of that preparation, they removed a fat graph from his stomach and placed between his brain stem and tumor in order to protect his brain stem from the radiation.

He would undergo 35 rounds of therapy, the highest amount allowable, on three separate spots on his head.

When it was over, doctors gave Eddie a double-edged sword.

Yes, he could leave the hospital and ring the bell, that meaningful celebration for patients completing radiation treatments. But they also told him his cancer would return. And it wasn’t a matter of if, but when.

And, once again, Eddie didn’t blink.

“Yeah, for a while it was one of those things where I’m like, ‘Oh, great, it’s gonna come back,’ and I was kind of like, not down in the dumps, but, ‘Oh, lovely,’’’ said Eddie, who now receives scans regularly. “But now at this point, I’m more or less like, ‘We know it’s going to happen.’ Even though it’s a matter of when, you still know it’s going to happen. So we’ll just cross that bridge when we get there and we’ll deal with it all over again.’’

In many respects, you wonder how someone can live like this. Timidity is a burden no one wants to carry.

For the Stuczynskis, they only know one way to deal with the seemingly impossible.

“Laughter is our friend,’’ said Lynn. “I’m just that way. I’m always goofing around. And that was how we got through it. You know, we just had fun with it. What are you gonna do? It’s a bad thing. It’s not something that anybody wants to have to go through. But if we’re gonna have to go through it, let’s at least have some fun with it. And that’s kind of how I approached it with him.’’

Eddie named his tumor “Karen,” after the internet meme. He made a t-shirt invoking Karen as well. Cursed her, too. They all did. A lot. 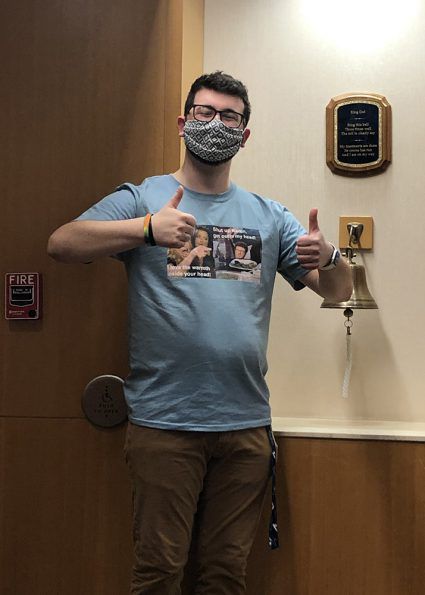 A cancer survivor herself, Lynn leaned on personal experience to help her son.

“Yeah, I had cervical cancer when I was 26,’’ she said. “But then that most likely has a lot to do with my attitude towards things too, I’m sure. You know, it’s like you just don’t take it for granted.’’

Eddie has taken the cross his mom used to bear and is determined to walk the same path.

“I’ve kind of thought like, you know, I have a bad day, yeah, it’s a bad day,’’ he said. “I’m not gonna, like, try to make myself happy because I was having a bad day. I’m gonna be upset or mad or frustrated or whatever it might be.

“But I don’t leave the day without thinking about, ‘OK, so it was a bad day. That’s OK, but what happened good in my life during this day, too? Or what can I take from all these bad experiences that’s going to make me a better person?’ And ever since I started thinking that way, I don’t want to say my life’s changed drastically, but my outlook on life has changed quite a bit since then.’’

This was Eddie’s answer to taking control of the situation, and not the other way around.

“I wanted to stay positive for obvious reasons,’’ he said. “But I also just wanted to be able to look at the positives that are currently in my life because, obviously, I was going through a really dark time, being diagnosed and dealing with cancer. I didn’t want that to be my life. And so I strive to not make it my life.’’

After almost a year away, Eddie returned to UW-Oshkosh this past fall. There was great joy, for sure. But there’s been a reality tied to that which, has tested Eddie’s unyielding optimism.

“He had pretty much almost had like a photographic memory,’’ said Lynn. “Even as a young child he was like that. Now, it’s like completely opposite.”

In short, Eddie has had to relearn how to learn. It’s been a laborious chore but, again, his attitude has proven to be his best asset.

“Eddie, every single day, he gives me, ‘Here are the 10 things that are wrong with me,’’’ she said. “But he still tells me, ‘Here’s the one thing that’s awesome, and I’m gonna go with that and what can we do?’ So this is unlike anything that I’ve ever seen, in particular in my role as one of the associate deans.”

Xiong helped Eddie with the classes he had to leave at mid-semester upon his diagnosis, advocated for the things that would improve his academic life — like being able to take more time for tests — and directed him on the things he needed to advocate for himself. They were in constant contact.

“It’s truly a pleasure when students are willing to accept help,’’ said Xiong, “because, overall, society has a negative stigma about asking for help. That it’s a weakness to ask for help, and Eddie did not see that as a weakness. He sees it as a strength.’’

Whiting said he has seen Eddie find his new normal this past semester, and believes it’s because of another personality trait Eddie never shows.

“I’ve seen him in those moments where he is frustrated,’’ said Whiting. “I think one of the things behind that big smile and that really wonderful attitude is that there’s really a fighter there. And there’s a warrior there that is fighting this battle. I don’t think everyone always sees that. But the thing is, he hasn’t given up on it.

“And I really see that this semester, in particular, that he’s really found his new stride. And it’s not like the old one, and that’s OK. But he’s found his way to navigate this and to find his success. Even if it doesn’t look how he thought it would look back when he was a freshman. I think that’s the thing that we’ve really figured out this year; how do we find his way of finding success?’’

Eddie says he shares his story because it’s his chance to help others. Perhaps change their lives. 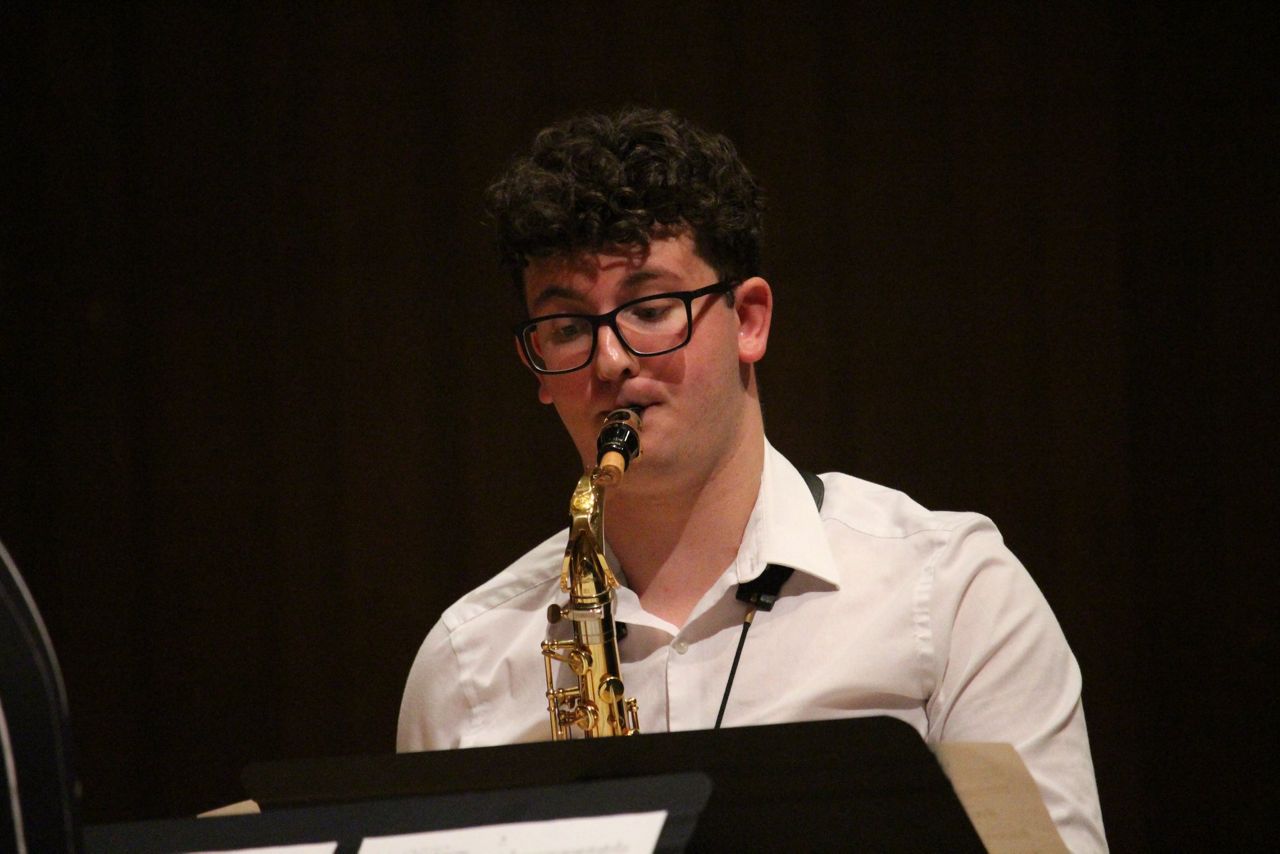 While he has his own barrel-full of challenges ahead, he still lives by an idea his parents pushed when he was younger, and damned if he will not continue to put it into practice.

“No one’s the same, obviously, but people always don’t understand what other people are going through,’’ he said. “I mean, I’ve been brought up and raised to understand that. I’m very lucky.

“My mom and dad, like one of the things that always sticks in my head and always probably will, my mom would always tell us to smile at people. Because you never know what they’re going through right now. And a smile can change someone’s world, save someone’s life in some cases. And I’ve always done that ever since then. And even more nowadays, I’m glad I do that.’’

Eddie Stuczynski is a remarkable young man. And, yes, hundreds of people know what he’s going through. But if you happen to see him, be sure to smile.