As Riley Autore tells her story to her friends at the University of Wisconsin-Green Bay’s Marinette campus, a lot of eyebrows get raised.

You took a ferry to school? Even in the winter? You had to travel two hours, one way, just to play a high school game? You’re a volunteer… what? Did you say, firefighter?

“They find it hard to believe that I’m actually a firefighter,’’ said Autore, a sophomore nursing major.

And that whole ferry boat thing?

“Our ferry boat can break through six feet of ice, so it runs year-round,’’ said Autore. “So, our school buses just drive right on the ferry, and we stay on the bus the whole time.’’

Such is life on Drummond Island, Mich., the kind of place where at L&M Bait and Tackle, owner Mike Hefland can fix you up with some nightcrawlers and a new fishing pole, then invite you to his adjoining Port of Call Restaurant and cook you up a New York Strip. 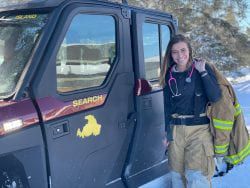 Living on Drummond Island is not necessarily easy, but like a lot of things in life, it is what you make of it.

For Riley Autore, the dream has always been to help other people. But unlike a lot of folks, she went from thinking about it to doing something about it.

When she was 16, she decided she wanted to join her father and brother at Drummond Island Fire and & Rescue.

“I feel like I took the action because I grew up in a really small town,’’ she said. “So, I already knew everybody in the fire department, and they knew me, how I was raised. If I went into a department where nobody knew me, they’d probably just say like, ‘Oh, she’s just a girl. We probably don’t want her.’ But they all knew me and knew that I was raised tough. They didn’t doubt me for a second. So that really helped.

Riley attended elementary school on the island but starting in seventh grade took the ferry to middle school and then the aptly named DeTour High School. Once in high school, her desire to help others only accelerated, which is why she opted to join a few other students and go to the Sault Area Career Center in Sault Ste. Marie, Mich., and took the Allied Health program where she could get hands-on experience with clinical and technical nursing skills.

The Career Center was about an hour away from her high school, so the bus would head up there in the morning, where she’d take classes for two hours, then return to her regular high school for classes in the afternoon. She was also a sports nut, taking part in volleyball, basketball and track. It made for some long days. 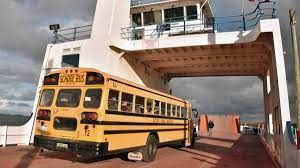 A school bus driving onto the ferry. Courtesy: Detroit News

“Everywhere in the area was small, so we’d travel up to two hours for games,’’ she said. “So some games, I wouldn’t get back till 11 o’clock at night, then get up to go to the Career Center the next morning and have to leave by 6:30 a.m. So it was a lot.’’

Nursing school will be a lot as well. She plans to keep pushing until she earns her Masters in a job that is, thanks to the COVID-19 pandemic, fraught with more danger than it once was.

Autore said she has a couple of more classes to take before she becomes a fully certified firefighter and has already done training on such things as structure fires, how to get people out of burning vehicles, and her favorite, cold water rescue.

“So, we did class for like four hours in the morning,’’ she said. “Then the new guys, as a group, went out on the ice in our (survival) suits. They would cut a hole in the ice for us and we’d practice the different ways on how to get people out. Learn how to be comfortable in the suit."

“We spent the whole afternoon in the water.’’

And how much fun was that?

“It was so cold, I actually got frozen into my suit,’’ she said. “So, I had to lie in front of the heater before I was able to get out.’’

Fire chief Steve Kemppainen said the youngest Autore has been a welcome addition to his team.

“She’s done a real great job,’’ he said. “We’re always grateful to have young ones join us and help out. And we need as much help as we can get, because it’s all volunteer."

“She’s a super gal and really ambitious. She’s willing to do anything you ask her.’’

That willingness came to light on the first fire fight she ever took part in, when she went along as an observer.

“So, I just really sat there and helped people when they needed a new air tank,’’ she said “I’d take it off, put a new one on so that they could go back and keep fighting fire without having to take the time to take the whole device off and do it themselves.’’

And when the day was done, the fire was extinguished and Riley Autore’s first experience as part of the Drummond Island Fire & Rescue was in the books.

“I felt pretty good,’’ she said. “I went out and celebrated that night with all you can eat wings.’’