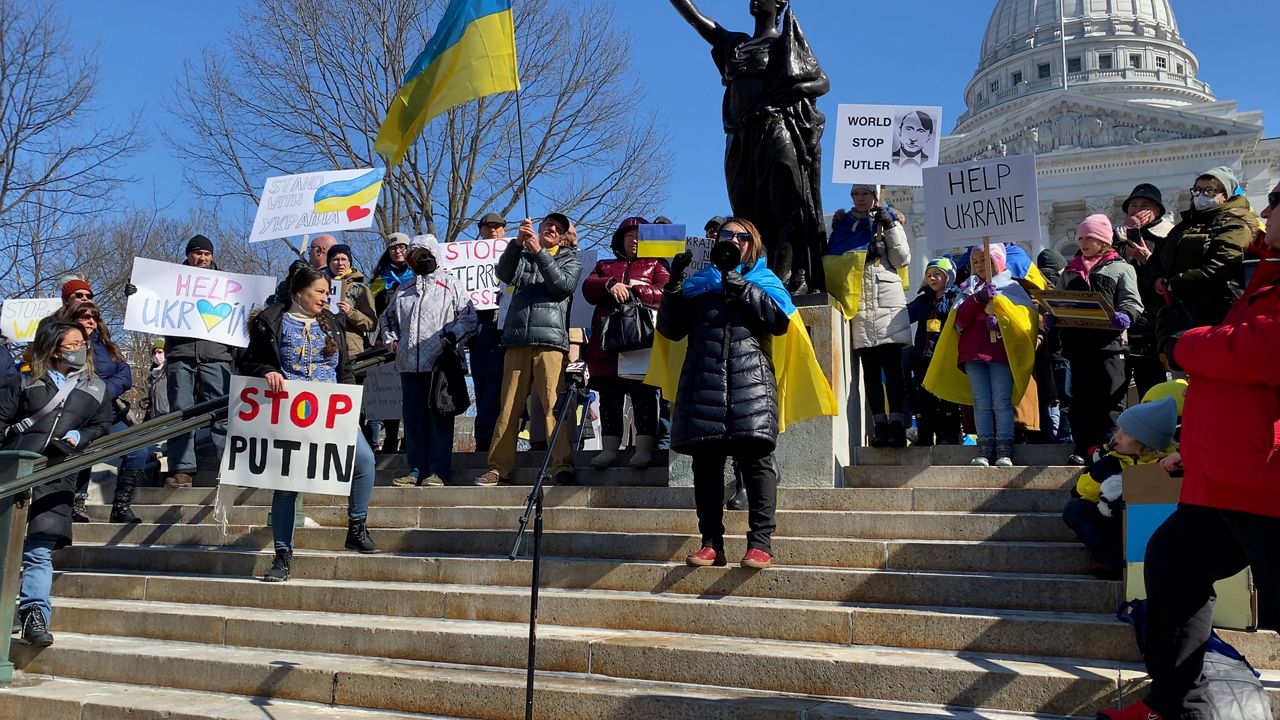 MADISON, Wis. — Hundreds gathered on the steps of the Wisconsin State Capitol to rally support for Ukraine.

More than 200 people brought signs and flags, and​ sang the Ukrainian National Anthem there Saturday afternoon.

Many were Ukrainian-American, and had family back in Ukraine.

“My dad is in a makeshift bomb shelter, which is his root cellar,” said organizer Ruslana Westerlund. “They bought kerosene lamps. They have blankets; they have canned food, and root vegetables to eat.”

However others, like Christine Dudiak, don’t know a soul in Ukraine.

“We feel very strongly in Ukraine's right to independence,” Dudiak said. “They did nothing to provoke this attack. They have their own culture, their own language, their own history and they have a right to their own self determination to be a democratic country.”

Olha Skyba works for UW-Madison. Her parents were visiting from Ukraine, as they do every year. That’s when Russia invaded. They were here in Wisconsin, and can only watch on the news, and keep in touch with loved ones still there.

Her father Oleh Humenyuk got up to speak to the crowd, and Skyba translated for him.

“We experienced something that's never happened before: We had to hear that the war started,” Skyba said, translating her dad’s words.

Their home is now becoming a war zone. Yet he ended his speech with some slices of humor. The whole crowd laughed when he brought up what Ukrainian transportation officials have told citizens.

“[The department of transportation said], 'Please destroy all the signs in the streets so the Russian troops do not know how to orient themselves.”'

For so many at the rally, just feeling the solidarity made an impact. Westerlund flew her Ukrainian flag at home, which led to a touching moment.

“My husband woke me up, like, 'Ru! Ru! The neighbor across the street put up a little flag,'” Westerlund said. “She cut a flag like this, and put it in her window. In my line of vision so I could feel supported.”

That was the whole goal of the rally: To show support. To Ukrainians and Ukrainian-Americans, it makes a difference.

“We’re very grateful for the support from United States,” Skyba said, translating Humenyuk's words. “They don’t have a chance, because this country is invincible.”