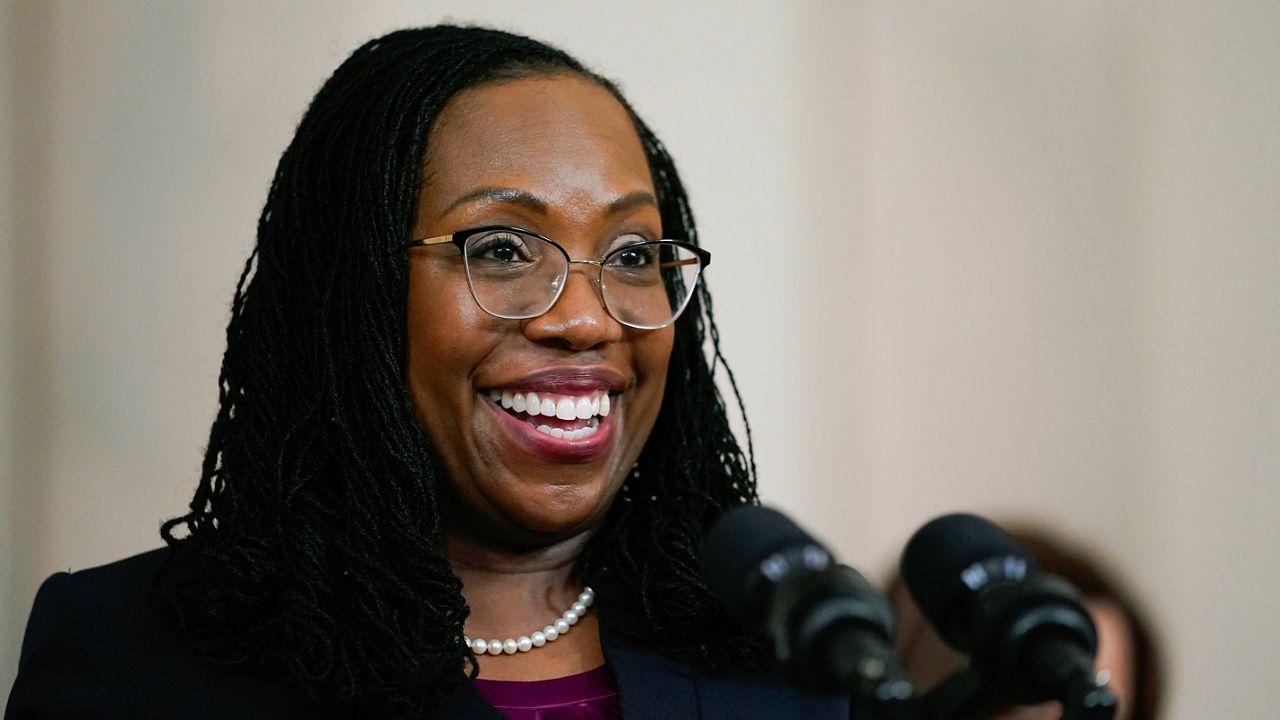 Judge Ketanji Brown Jackson speaks Friday after President Joe Biden introduces her as his nominee to the Supreme Court in the Cross Hall of the White House. (AP Photo/Carolyn Kaster)

Biden nominates Ketanji Brown Jackson to Supreme Court: 'She is one of our nation’s brightest legal minds'

President Joe Biden announced Friday he is nominating federal Appeals Court Judge Ketanji Brown Jackson to the Supreme Court, following through on a campaign promise to send the first Black woman in history to the high court.


Jackson, 51, was widely considered the frontrunner to replace Justice Stephen Breyer since he announced last month that he will retire this summer.

“For too long, our government, our courts haven't looked like America,” Biden said at a White House event introducing Jackson as his pick. “And I believe it's time that we have a court that reflects the full talents and greatness of our nation with a nominee of extraordinary qualifications, and that we inspire all young people to believe that they can one day serve their country at the highest level.”

Jackson was appointed last year by Biden to the U.S. Court of Appeals in the District of Columbia, a springboard to the Supreme Court. Popular among progressives, she had spent the previous seven years on the federal trial court in Washington, D.C., and also served 2½ years on the U.S. Sentencing Commission, appointed to both by former President Barack Obama. She also worked as a clerk to Breyer.

A married mother of two daughters, Jackson was born in Washington and raised in Miami. She attended both undergraduate and law school at Harvard University.

“I am truly humbled by the extraordinary honor of this nomination,” Jackson said at the White House.

She noted that she shares a birthday — Sept. 14 — with Constance Baker Motley, who in 1966 became the first Black woman to serve as a federal judge. Motley, she said, inspired her in her career.

“And if I'm fortunate enough to be confirmed as the next associate justice of the Supreme Court of the United States, I can only hope that my life and career, my love of this country and the Constitution, and my commitment to upholding the rule of law and the sacred principles upon which this great nation was founded will inspire future generations of Americans,” Jackson said.

She also said she learned from working for Breyer “that a Supreme Court justice can perform at the highest level of skill and integrity while also being guided by civility, grace, pragmatism and generosity of spirit.”

“Justice Breyer, the members of the Senate will decide if I fill your seat,” she said. “But please know that I could never fill your shoes.”

Calling making a Supreme Court pick “one of the most serious constitutional responsibilities a president has,” Biden said he sought a nominee who is extremely qualified and who also has “an independent mind, uncompromising integrity and a strong moral compass and the courage to stand up for what she thinks is right.”

“Her opinions are always carefully reasoned, tethered to precedent, and demonstrate respect for how the law impacts everyday people. It doesn't mean she puts her thumb on the scale of justice one way or the other. But she understands the broader impact of the decisions, whether it's cases addressing the rights of workers or government service. She cares about making sure that our democracy works for the American people. She listens.”

"She is one of our nation’s brightest legal minds and will be an exceptional Justice," Biden said in a tweet earlier Friday.

I’m proud to announce that I am nominating Judge Ketanji Brown Jackson to serve on the Supreme Court. Currently serving on the U.S. Court of Appeals for the D.C. Circuit, she is one of our nation’s brightest legal minds and will be an exceptional Justice.https://t.co/iePvhz1YaA pic.twitter.com/Nzqv2AtN8h

If confirmed, Jackson would join the liberal minority of a conservative-dominated court that is weighing cutbacks to abortion rights and will be considering ending affirmative action in college admissions and restricting voting rights efforts to increase minority representation.

Shortly after announcing the pick earlier Friday, the White House launched a webpage touting Jackson's background and explaining what happens next in the confirmation process.

"With Justice Breyer's retirement from the United States Supreme Court and my Constitutional responsibility to replace that justice, I've sought a candidate with the strongest credentials, record, character and dedication to the rule of law," Biden said in a video message posted to social media. "That's why I'm excited to nominate one of the nation's brightest legal minds, Judge Ketanji Brown Jackson, to be our next Supreme Court justice.

I sought a nominee with the strongest credentials, record, character, and dedication to the rule of law. That’s why I’m excited to nominate Judge Ketanji Brown Jackson to serve on the United States Supreme Court. pic.twitter.com/iGHLqqRAD0

"Raised by public school teachers, she was a standout student who became a clerk for Justice Breyer, the same justice she will be replacing when confirmed," Biden continued, adding: "Judge Jackson has been confirmed by the United States Senate three times in her career and garnered support from both sides of the aisle each time.

"What's remarkable is the background she brings to the bench," Biden said. "Judge Jackson has deep experience across the legal system. She served as a Federal Public Defender, a top lawyer in private practice, a member of the U.S. Sentencing Commission and a federal judge."

Also appearing in the video was former Republican House Speaker Paul Ryan, who is related to Jackson by marriage, and introduced her at her first judicial confirmation hearing in 2012.

"Janna and I are incredibly happy for Ketanji and her entire family," Ryan wrote on Twitter. "Our politics may differ, but my praise for Ketanji's intellect, for her character, and for her integrity, is unequivocal."

Janna and I are incredibly happy for Ketanji and her entire family. Our politics may differ, but my praise for Ketanji's intellect, for her character, and for her integrity, is unequivocal.

Jakson was confirmed to the U.S. Court of Appeals in the District of Columbia last year by a 53-44 vote in the Senate, with three Republicans – Sens. Susan Collins of Maine, Lisa Murkowski of Alaska and Lindsey Graham of South Carolina — supporting her.

But Graham took to Twitter on Friday to express his disappointment that Biden did not nominate fellow South Carolinian Childs, adding: "I expect a respectful but interesting hearing in the Senate Judiciary Committee."

Collins, on the other hand, praised Jackson as "an experienced federal judge with impressive academic and legal credentials."

"I will conduct a thorough vetting of Judge Jackson's nomination and look forward to her public hearing before the Senate Judiciary Committee and to meeting with her in my office," she added.

"I want to congratulate Judge Ketanji Brown Jackson on her nomination to the Supreme Court," former President Barack Obama wrote. "Judge Jackson has already inspired young Black women like my daughters to set their sights higher, and her confirmation will help them believe they can be anything they want to be."

"With her exceptional qualifications, Judge Ketanji Brown Jackson will be a Justice who will uphold the Constitution and protect the rights of all Americans, including the voiceless and vulnerable," Senate Majority Leader Chuck Schumer wrote, adding: "Senate Democrats spent the past year working with President Biden to shape a federal judicial system that fully represents America, and we will continue that trend by confirming Judge Ketanji Brown Jackson to the Supreme Court."

With her exceptional qualifications, Judge Ketanji Brown Jackson will be a Justice who will uphold the Constitution and protect the rights of all Americans, including the voiceless and vulnerable. pic.twitter.com/PYuBv5Y2UC

"I applaud the historic nomination of Judge Kentaji Brown Jackson to the Supreme Court," wrote Georgia Sen. Raphael Warnock. "It’s time the federal judiciary reflects the diversity of our country. Georgians want a nominee who is fair and qualified. I look forward to reviewing this nomination.

I applaud the historic nomination of Judge Ketanji Brown Jackson to the Supreme Court. It’s time the federal judiciary reflects the diversity of our country.

Georgians want a nominee who is fair and qualified. I look forward to reviewing this nomination.

Republican Senate leader Mitch McConnell, who voted against Jackson for her current judgeship, congratulated her on her nomination and said he looks forward to meeting her, but blasted her as "the favored choice of far-left dark-money groups that have spent years attacking the legitimacy and structure of the Court itself."

"With that said, I look forward to carefully reviewing Judge Jackson’s nomination during the vigorous and thorough Senate process that the American people deserve," he added.

In making his decision, Biden sought input from senators from both sides of the aisles, as well Vice President Kamala Harris and a team of other consultants that included academics and lawyers.

Biden said Friday that Jackson “deserves to be confirmed” and that he hopes the Senate Judiciary Committee “will move promptly.”

Senate Judiciary Committee Chairman Dick Durbin has said, too, that he wants the Senate to move quickly on the nomination, and senators have set a goal of confirmation by mid-April. But that timeline could be complicated by a number of things, including developments between Russia and Ukraine and the extended absence of Democratic Sen. Ben Ray Lujan of New Mexico, who suffered a stroke last month and is out for several weeks. Democrats would need Lujan’s vote to confirm Biden’s pick if no Republicans support her.

Jackson would be the current court’s second Black justice — Justice Clarence Thomas, a conservative, is the other — and just the third in history.

She would also be only the sixth woman ever to serve on the court, and her confirmation would mean that for the first time four women would sit together on the nine-member court.