Addressing the Munich Security Conference on Saturday, Vice President Kamala Harris said that the U.S. and its allies "will impose significant and unprecedented economic costs" on Russia should the country further invade Ukraine.

"Let me be clear, I can say with absolute certainty: If Russia further invades Ukraine, the United States, together with our allies and partners, will impose significant, and unprecedented economic costs," Harris said.

"We have prepared, together, economic measures that will be swift, severe, and united," she continued. "We will impose far-reaching financial sanctions and export controls. We will target Russia’s financial institutions and key industries, and we will target those who are complicit and those who aid and abet this unprovoked invasion."

Harris' speech came one day after President Joe Biden gave his clearest attestation yet that Russia’s president Vladimir Putin was imminently prepared to invade Ukraine. Biden said Friday that he is “convinced [Putin has] made the decision” to invade and warning such an attack could occur in the coming days.

Biden attributed the new assessment to "significant intelligence capability" of the U.S. government.

The president called on Moscow to choose diplomacy as Russia continued to surge troops at Ukraine’s border, fueling fears of an imminent invasion that could threaten Europe’s post-Cold War security order.

“Russia has a choice: between war and all the suffering that will bring, or diplomacy that will make a future safer for everyone,” Biden said from the White House. “There are many issues that divide our nation and our world. But standing up to Russian aggression is not one of them.”

Harris said that the U.S. has attempted to engage Russia in good faith, but accused them of not reciprocating.

"Russia continues to claim it is ready for talks while, at the same time, it narrows the avenues for diplomacy," she said. "Their actions simply do not match their words."

On Friday, Michael Carpenter, Ambassador to the Organization for Security and Cooperation in Europe, said that Russia "probably has massed between 169,000-190,000 personnel in and near Ukraine," compared to roughly 100,000 at the end of January.

"This estimate includes military troops along the border, in Belarus, and in occupied Crimea; Russian National Guard and other internal security units deployed to these areas; and Russian-led forces in eastern Ukraine," Carpenter said.

Harris said that the U.S. "will not stop with economic measures," but will also "further reinforce our NATO Allies on the eastern flank."

"In fact, together we have already taken steps to strengthen our deterrence and collective defense," she said. "We have deployed an additional 6,000 American service members to Romania, Poland, and Germany. We have put another 8,500 service members in the United States on a heightened sense of readiness."

Harris echoed Biden's previous comments that U.S. forces "will not be deployed to fight inside Ukraine," but rather will "defend every inch of NATO territory."

The vice president touted U.S. support for Ukraine and its people, including "security assistance, humanitarian assistance and economic assistance," and pledged to "continue to support the people of Ukraine."

Harris also met Saturday with Ukranian President Volodymyr Zelenskyy, telling him that the U.S. remains committed to finding a diplomatic resolution to the situation, but added that "if Russia takes aggressive action against Ukraine," the U.S. and its allies are prepared with severe economic sanctions.

"We would prefer that this would be resolved in a diplomatic way, and we have remained open to a diplomatic path to resolution," Harris said to Zelenskyy. "However, if Russia takes aggressive action against Ukraine, we are prepared to implement and to do that work in a unified way with our allies around the world."

"Any threats to your country, we take seriously," she added.

"This is our land, and the only thing we want is to have peace, bring the peace back to our country," Zelenskyy said, before praising the Biden administration and the "bipartisan support of the United States."

Zelenskyy went on to say he needs Western allies to take “specific steps, specific support,” alluding to Ukraine’s requests for even more military and economic assistance. Zelenskyy also noted that with Russian troops at his country’s borders, Ukraine’s army is “defending all of Europe.”

The two leaders discussed recent developments regarding of Russia’s military build-up around Ukraine, according to a White Hosue readout of the meeting.

"This is a decisive moment in our world's history," Harris said. "And this is an important meeting for that and many other reasons."

Harris "underscored the U.S. commitment to Ukraine’s sovereignty and territorial integrity," the White House said. "They discussed the united Transatlantic approach if Russia further invades Ukraine, and the Vice President outlined the swift and severe economic measures that have been prepared alongside our Allies and partners. The Vice President and President Zelenskyy agreed on the importance of diplomacy and de-escalation."

One day before her speech, the vice president reaffirmed the United States' commitment to the alliance in a meeting with NATO Secretary-General Jens Stoltenberg, and warned of "severe consequence" should Russia invade Ukraine.

Harris urged that a diplomatic solution still remains possible, echoing sentiments that President Biden and Secretary of State Antony Blinken expressed the day before, but warned that the U.S. and its allies will respond with harsh sanctions should Russia invade Ukraine.

“We remain, of course, open to and desirous of diplomacy, as it relates to the dialogue and the discussions we have had with Russia, but we are also committed, if Russia takes aggressive action, to ensure there will be severe consequence in terms of the sanctions we have discussed,” Harris said at her meeting with Stoltenberg. “And we know the alliance is strong in that regard.”

Harris held her first meeting of the conference with Stoltenberg, which she called "intentional," calling the relationship one of the United States' most "critical."

"Our alliance and commitment to NATO is enduring," she said at the meeting with Stoltenberg, adding: "As a member of NATO, we feel very strongly about and will always be committed to the principle of territorial integrity and sovereignty."

Stoltenberg thanked Harris and praised the Biden administration for their commitment to the alliance, which frayed under that of their predecessors. 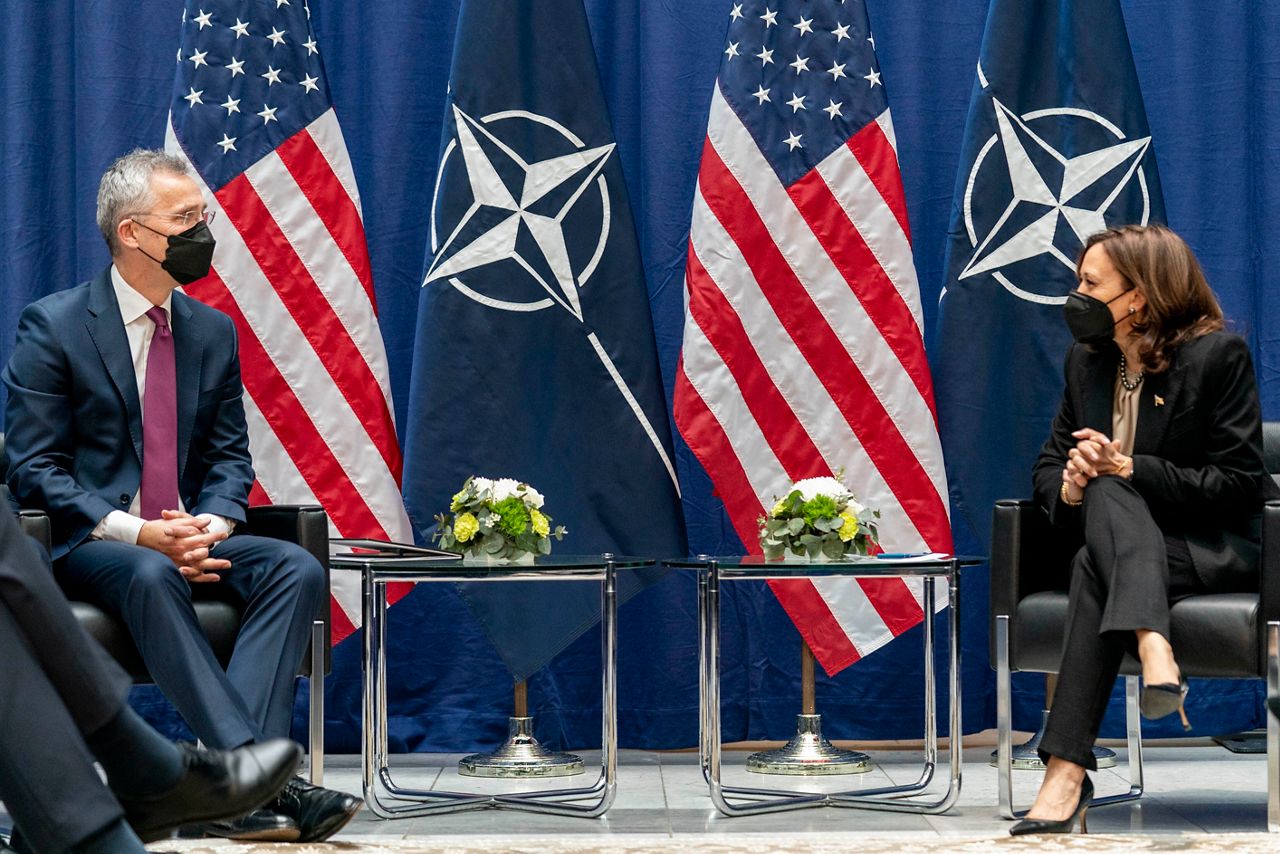 "NATO remains the cornerstone for our security the security of Europe, for North America," he said. "Therefore I am extremely grateful for your personal commitment to our alliance, to the transatlantic bow and also the very strong and staunch commitment to NATO from the Biden-Harris administration, not only in words, but also in deeds we see on the ground in Europe now."

"On Friday, I went to Romania to US troops there, and they always impressed me with their professionalism, their dedication and of course, to have U.S. troops and more U.S. troops in Europe on this critical time for our security," he said, adding that it "really demonstrates ... U.S. commitment to our shared security."

“I also welcome the fact that European allies are stepping up, also increasing their presence in the eastern border of the alliance and also investing more in defense,” Stoltenberg said. “So the reality is that North America and Europe are doing more together now that we’ve done for many years.”

Later Friday, Harris held a meeting with the leaders of the three Baltic nations: Estonia, Latvia and Lithuania. Harris reiterated to the group that the United States' commitment to Article V of the NATO treaty – the collective defense clause – is "ironclad." 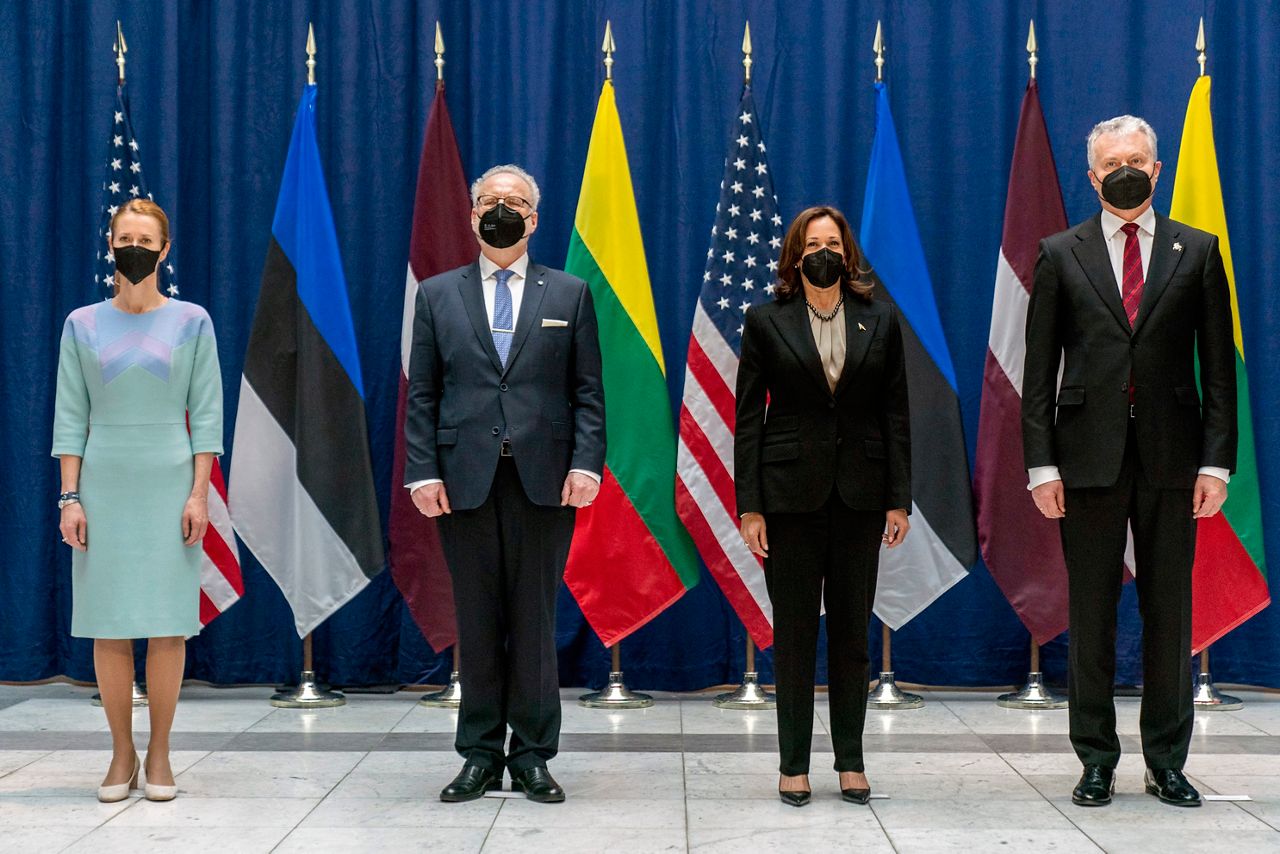 "Our position has always been and will continue to be that Article 5 is ironclad and the spirit behind it — an attack on one is an attack on all — remains our perspective," Harris said. "I do believe our greatest strength is our unity."

Lithuanian President Gitanas Nauseda called for the U.S. to establish a "permanent presence" of troops in the country: "I would say it is critically important for the security of our region to see more presence of United States troops."

Estonian Prime Minister Kaja Kallas also called for a greater U.S. troop presence in Baltic nations: "We have lost our independence to Russia once, and we don’t want it to happen again."