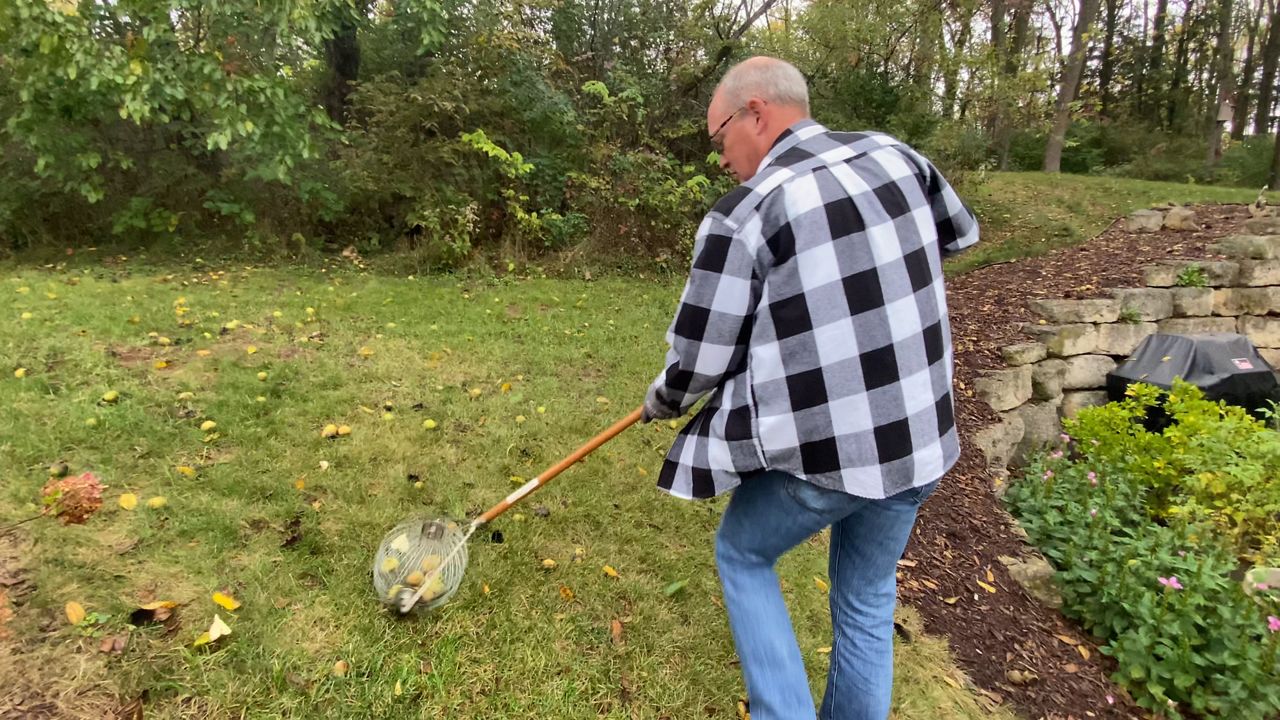 Man harvests walnuts from all over southern Wisconsin

MIDDLETON, Wis. — A Wisconsin man has built a business out of removing walnuts from people’s yards, and harvesting them into edible products.

Black walnut trees are native to southern Wisconsin. Farther north, they may be planted. Their population has doubled in the last 10-15 years.

That leaves homeowners with yards full of walnuts every fall. Squirrels love them. They crunch under tires when they fall onto the driveway. Plus, they can make it tough to mow the lawn without picking up every last one first.

He pushes around something called a Nut Wizard. It’s a wire ball at the end of a stick, pushed around like a push mower, that fills up with walnuts. That keeps him from constantly bending over to pick them up one by one.

Peterson scouts out yards and properties with tons of walnuts on the ground.

“I don’t want to knock on doors, I think that’s a little bit forward. So I generally send them a letter introducing myself, introducing J’s Black Walnuts, what I do, that kind of thing,” he said. "Pretty much all the time, people say by all means, come get these walnuts off my lawn.”

He doesn’t pay for the walnuts, just as the homeowners don’t pay him to get them off their lawns. He has product to sell, and they have a clear yard; it’s a win-win.

“It’s several tons of walnuts that I collect off the yards,” he said. “But then I end up with several hundred pounds of nut meat to sell, or I also bake cookies and breads to sell at farmers’ markets.”

Then comes time to process the nuts. He does it all in his garage.

“[It’s a] pretty lengthy process,” Peterson said. “The husk can make the nuts kind of bitter if you don’t get that off right away, so you gotta shuck ‘em, it’s called. Get the husk off. Then wash ‘em up real good.”

Then, he hangs the shucked walnuts in his garage for a minimum of six weeks.

Once they’ve cured for long enough, he’ll start to crack them and get the walnut meat out of the shells. That’s how he’ll spend his winter: in the garage, shelling nuts, one by one.

He estimates he’s got 30,000 walnuts hanging in his garage right now. Out of that, he should get about 200 pounds of meat.

Once processed, one pound of walnuts sells for $22.