From left to right: "Helping Hands" by Ciara Nash, "Branch Out" by Tonia Klein, "Continuing the Effort" by Grant Yun and "We Will Heal" by Liz Drayna. (Courtesy of the Wisconsin Historical Society)

MADISON, Wis. — Almost two years after COVID-19 started turning our world upside down, we still haven’t gotten back to normal.

But sooner or later, this pandemic, like every other historic event, will be in the rearview mirror, said Dave Desimone, director of Black Point Estate and Gardens for the Wisconsin Historical Society. And what we create now will make a big difference in what we see looking back, he said.

“Our job is to record the good, bad and ugly of any moment that we're living through,” Desimone said, “so that historians that come after us can sort of try to make sense of it all.”

The Wisconsin Historical society is working to help build out that record for future generations — while also getting messages to those of us living through the pandemic now. 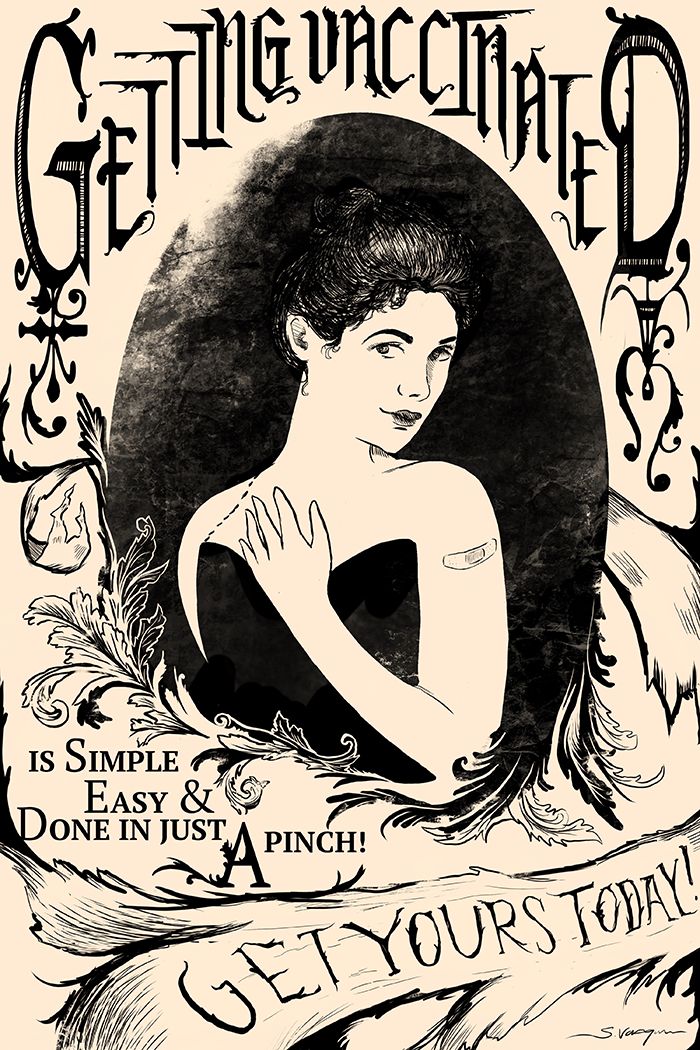 "Getting Vaccinated" by Sonia Vasquez. (Courtesy of the Wisconsin Historical Society)

The group’s COVID-19 Poster Project has brought together artists from across the state to create public information posters about the pandemic. The latest wave of posters, featuring works from 10 adult artists and four students, tackles topics like vaccination, masks and community support.

They’re meant to capture the spirit of posters from other historic eras, said Desimone, who coordinated the project — like World War I art pushing people to plant “victory gardens" or join the Red Cross.

“We’re very visual, obviously, in the 21st century. Memes being shared, and TikTok, and Instagram,” Desimone said. “But the poster has been around as a very effective way to influence and shape public opinion and thought since the 1860s.”

The Historical Society released its first phase of COVID-19 posters during the early months of the pandemic, in the spring and summer of 2020. Those works were real-time reactions to new concerns, like getting supplies to health care workers and groceries to elderly neighbors, Desimone said.

For the second phase of the project, published this fall, the team wanted to focus more on recovery, he said — “how we’re moving through this pandemic and trying to get back to whatever the new normal will be.”

One of the new posters, created by artist and Medical College of Wisconsin student Grant Yun, highlights the importance of “Continuing the Effort,” even at this late stage in the pandemic. 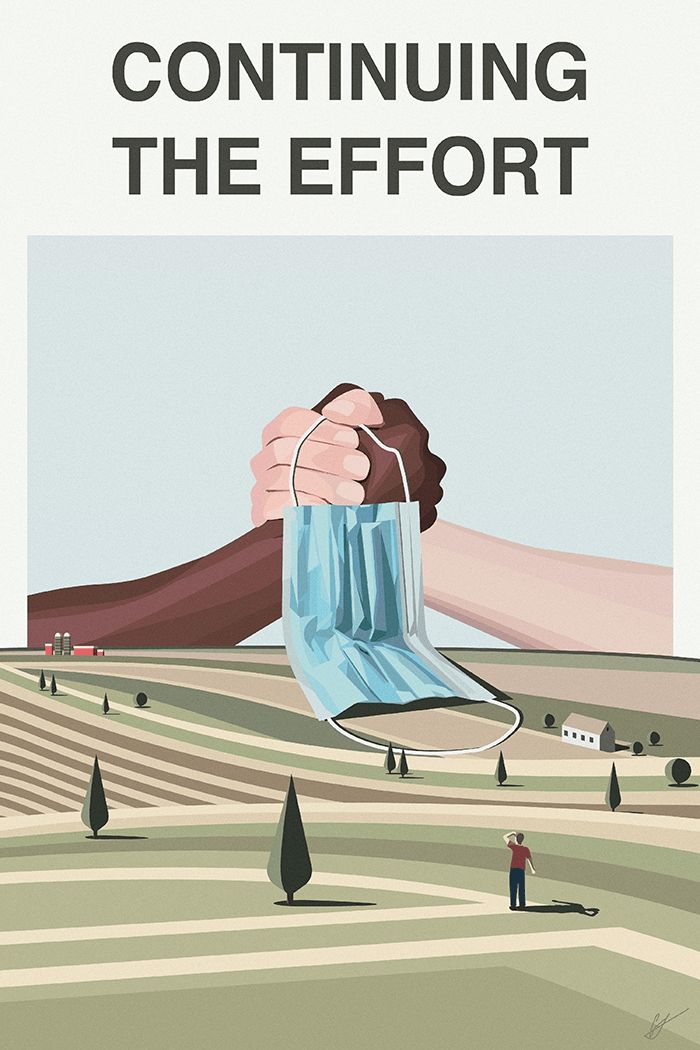 "Continuing the Effort" by Grant Yun. (Courtesy of the Wisconsin Historical Society)

“Just because we got through one year doesn't mean the pandemic is gone. And it could even get worse if we don't continue on taking those precautions,” Yun said. “When people see my poster, I just want to remind them that it's really a group effort.”

Yun, whose mom is an art teacher, said he grew up with art “as second nature.” But he’s also long been drawn to science, and to the idea of helping people as a physician. This project, he said, was a way to bring together both of those passions.

His poster features larger-than-life hands draping a huge blue mask over a classic Midwestern landscape. Yun, who grew up in California, said he was really inspired by Wisconsin’s rural scenery when he moved to the state, and has a whole series capturing Midwestern landscapes in a minimalist style.

He also wanted to feature the blue disposable mask, which he said has become “such a staple in everyday life” and a recognizable symbol of our current moment.

“It's so iconic of a certain period of history,” Yun said. 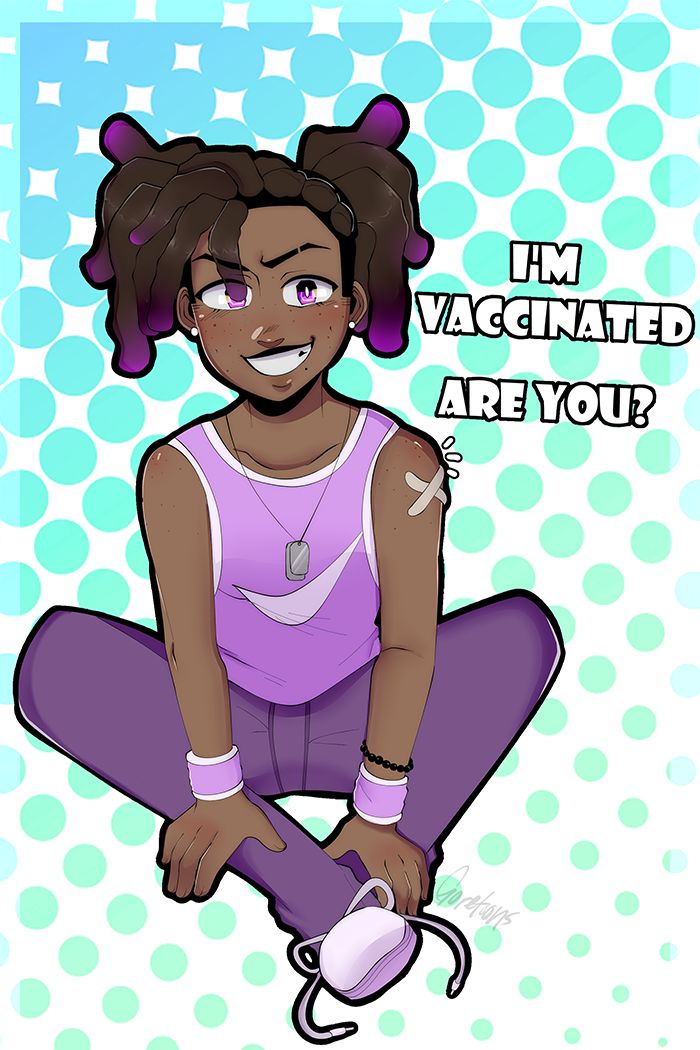 Other posters in the series reference different historic styles — like a Victorian-style advertisement for vaccination (“Done in just a pinch!”), or a bold letterpress message to “Trust In Science.”

By including students in the second phase, Desimone said the Historical Society also wanted to see the pandemic “through the eyes of folks that are experiencing this in their very formative years.”

Kerrianna Rought, a recent Capital High School graduate whose work was featured in the project, said she was excited to share art with a call to action.

“I like to, as an artist, put my thoughts out there,” she said. “If I don't know how to put it into words, I like to put it into visuals, because I feel like showing is a lot more effective than telling.”

Rought’s interest in art grew out of a love for video games, anime and cartoons, a style that shines through in her poster. And she said she wanted to feature a Black character in her submission because, as a Black person herself, she wanted to see more people of color represented.

She hopes her poster — which asks the question, “I’m vaccinated. Are you?” — can remind people that their decisions during the pandemic affect the health of those around them, too.

“I hope that it moves people to start creating a better place,” Rought said. “And helping people rethink some of their mindsets that they might have, especially about the vaccinations.” 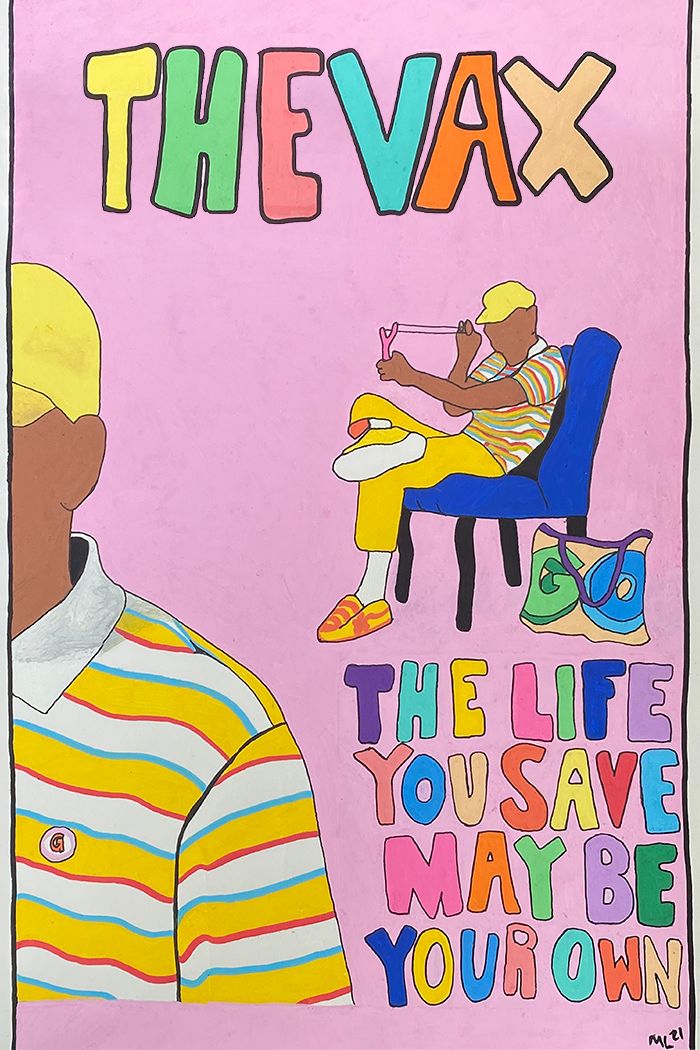 "The Vax" by Martha Laing. (Courtesy of the Wisconsin Historical Society)

Martha Laing, a senior at Cambridge High School, also focused on the COVID-19 shots for her poster — a colorful scene modeled on rapper Tyler, the Creator.

Though it’s mostly a hobby right now, Laing said she’d love to do art professionally in the future. She’s spent a lot of time creating art while stuck at home during COVID-19, even painting a giant mushroom mural on her wall.

“Before the pandemic hit, I definitely was like a go-go-go person — had to be doing something after school all the time, had to be hanging out with friends,” Laing said. “With the pandemic, I was forced to just stay alone and learn about myself. And I think I really grew as a person throughout that.”

The poster — which she finished in a Panera Bread, on her way to a camping trip — shares the message that with the vaccine, “the life you save may be your own.”

Laing said she works in food service and was able to get her own vaccine early on. Even though she was worried about feeling sick, and had to come all the way out to Milwaukee from her home in Lake Mills to get an appointment, she walked away from her first dose feeling excited.

“Even the first time, I knew it wasn't over, but I was just really happy to have some part of a vaccine in me,” Laing said. “And feel like I'm making steps towards being fully vaccinated, and being more comfortable going out in public.”

Though the pandemic has become an “extremely polarizing thing” in the U.S., Desimone said he hopes the poster project can spark a dialogue and help people find some common ground.

And the artists have already made some history: In addition to being available for purchase, the COVID-19 posters also are going into the Historical Society’s permanent collection, he added. A century down the line, they may help people understand the history we are living through today.

“Hopefully we serve those historians who come long after us well,” Desimone said, “and there’s not a lot of gaps in the story.”

Check out all the posters from both phases of the project on the Wisconsin Historical Society website.