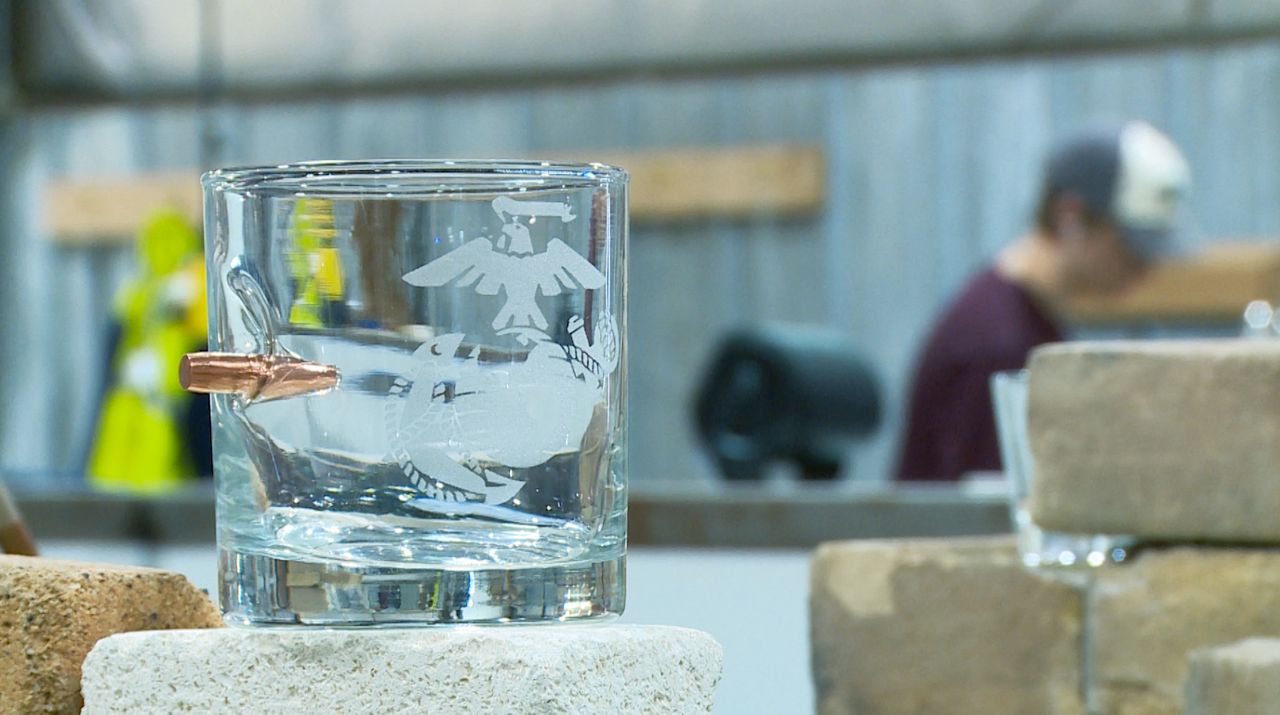 APPLETON, Wis. — Blow torches, bullets, and drinking glasses may not typically be a good mix but for the Wolfgrams’, it has been a huge success.

“It started as a small project to kind of work with my dad out of retirement. It combines a couple things we both like, guns and drinking,” said Ben Wolfgram.

Bruce, who was recently retired, admits he was bored and his son knew it.

“He tasked me with figuring out how to do it. He said I want to put a bullet in the side of a shot glass and make an actual shot-glass,” Bruce said. “And so I kind of took the redneck approach and just put some safety goggles on and went out in the garage and grabbed a torch.” 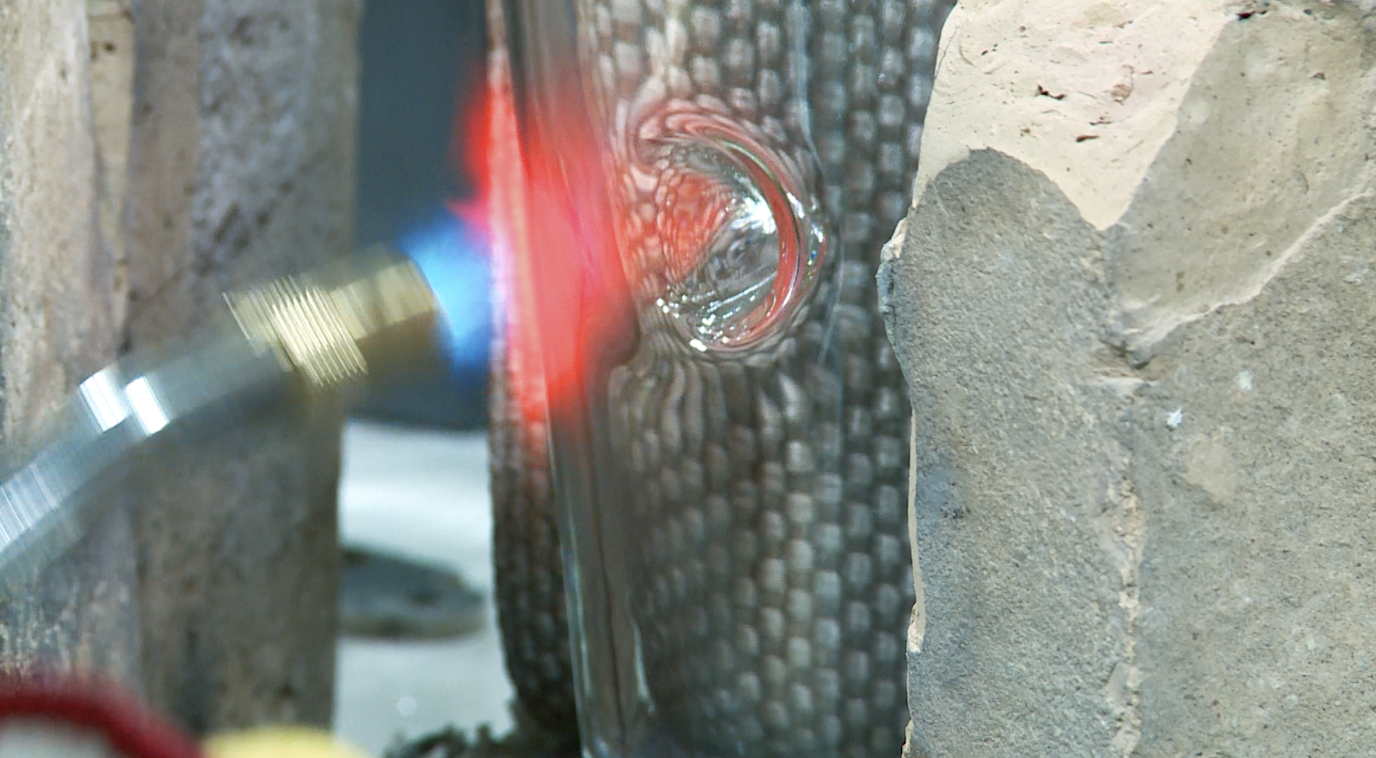 After a few shattered glasses and some internet research, they got the bullets to stick. Bruce began making glasses in his New London garage and started selling them at gun shows. One day he sold 50. That same day, Ben who was living in Philadelphia at the time sold 50 online.

“Then I drove home Sunday night and of course my sales stopped and his sales kept pouring in all week long. So at that point we realized that online was the way to go,” Bruce said. “I said, why don’t you just come back from Philly and just run it the way you want to run it…and of course that path has been great for us.”

They’ve experienced fast growth since Ben got things rolling with his shot glass pun 2015. When Customer Service Team Lead Laura Rowe heard there was an opening two years ago, she rushed over with an application.

“The people that work here are great. They’re wonderful. What we do here is unique and it’s a lot of fun,” said Rowe.

“The boxes we receive are coming out of Green Bay. Fishing lures are out of Wisconsin, the spoons and things like that. We try to source anything locally within the state that we can. Other than that, it’s made in the U.S.,” said Rowe.

“We’re taking a lot of the old trades like glass working and metal working, especially with the pewter casting, the stuff that’s kind of gone to the wayside and now together with 3D modeling and 3D printing, bringing that back up and making something new with it,” said Ben.

Glasses for veterans and first responders are important to the company.

“This is our Hard to Kill line. We work with police officers who were shot on the line of duty,” says Ben as he holds a glass with six embedded bullets. “We make a glass every month for a police officer that was shot. We make it with the caliber of bullet that was shot and the number of times, then we give them a set of glasses.”

Other customers include the NHL, NFL, and actor/golfer Bill Murray.

“We’ll have glasses for sale at the Ryder Cup coming up here in Wisconsin this next year,” said Ben

The future looks bright for the duo but soon after opening their 11,000 square feet facility in Appleton last year, the Pandemic hit.

“We saw about a 90 percent dip in sales. It got pretty scary,” said Ben.

Ben gave his staff six weeks of paid leave. Then his sister in law, a doctor for Children’s Hospital, told him they were in need of masks. So he got to work.

“We were all taught how to sew. We didn’t know what we were doing. My dad and I were sewing,” said Ben. 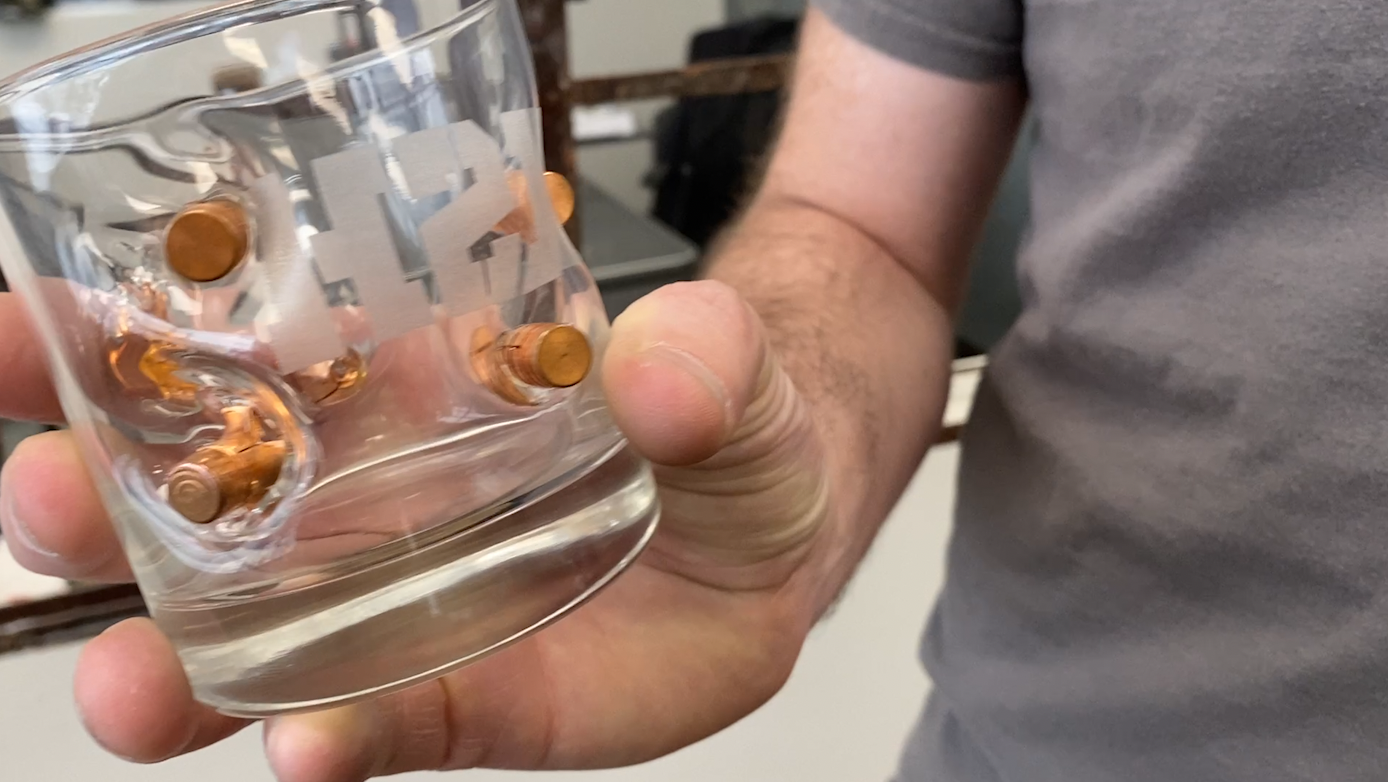 “I never thought I’d be behind a sewing machine,” Bruce saidl “Yeah that was crazy.”

Staff who were being paid to stay home came back in to volunteer their time for the effort.

“Together with Face Mask Warriors of Wisconsin, we made and distributed over four hundred thousand masks just to this local area,” said Ben.

They also created a glass line for essential workers. The proceeds from those sales funded the mask effort.

Business has since picked back up and BenShot just got through a busy Christmas season. It’s been quite the ride, starting with that initial strange mix.