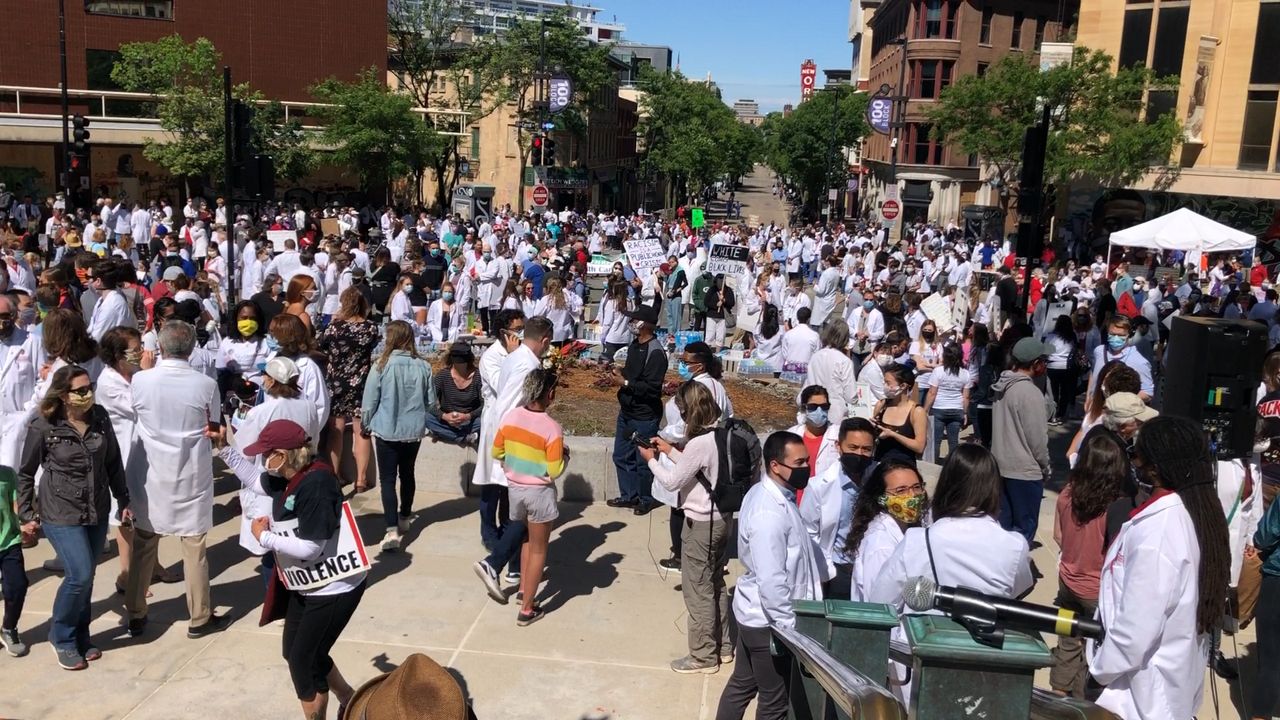 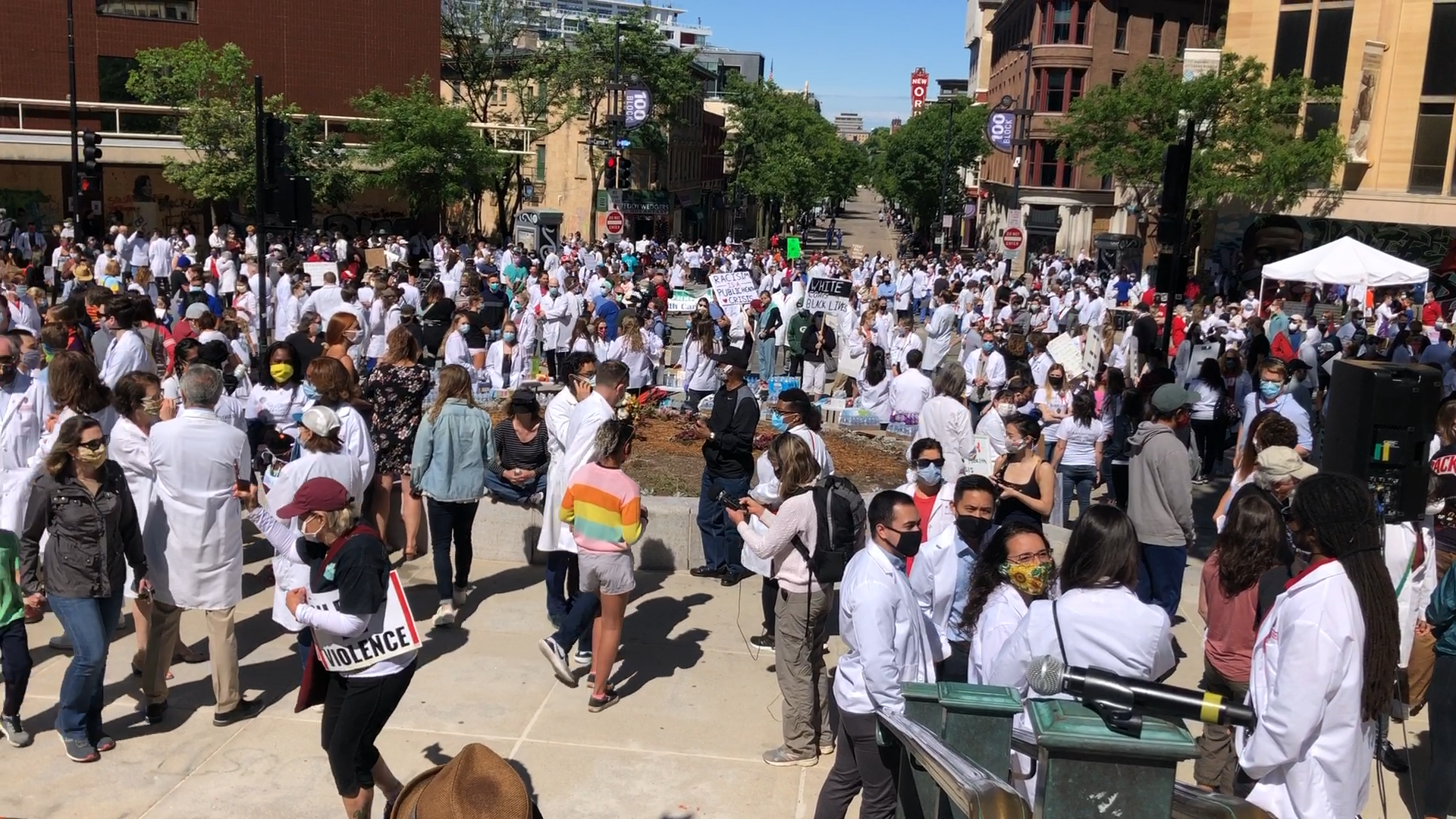 Madison’s capitol square was a sea of white coats Saturday morning in protest. White Coats 4 Black Lives now has a chapter in Madison, started by the UW-Madison members of the Student National Medical Association. 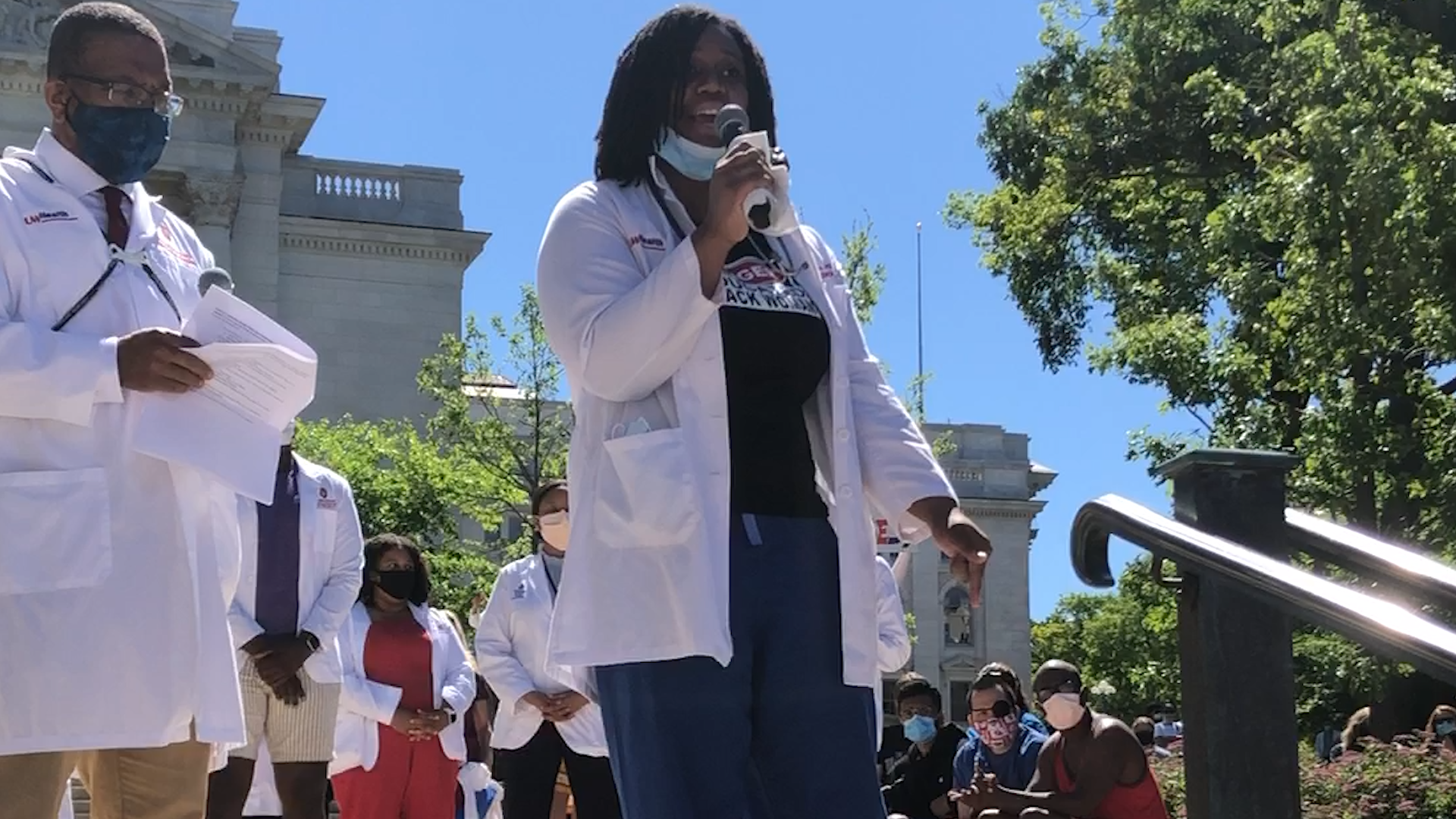 “When George Floyd was on the ground, begging for his life, no oxygen flowing to his brain, his neck compressed, he cried out and he said ‘I can’t breathe’,” Dr. Jasmine Zapata said to the crowd at the beginning of the rally. The silence in the air was heavy for a few seconds. “When he did that, every healthcare professional around the nation heard him.” 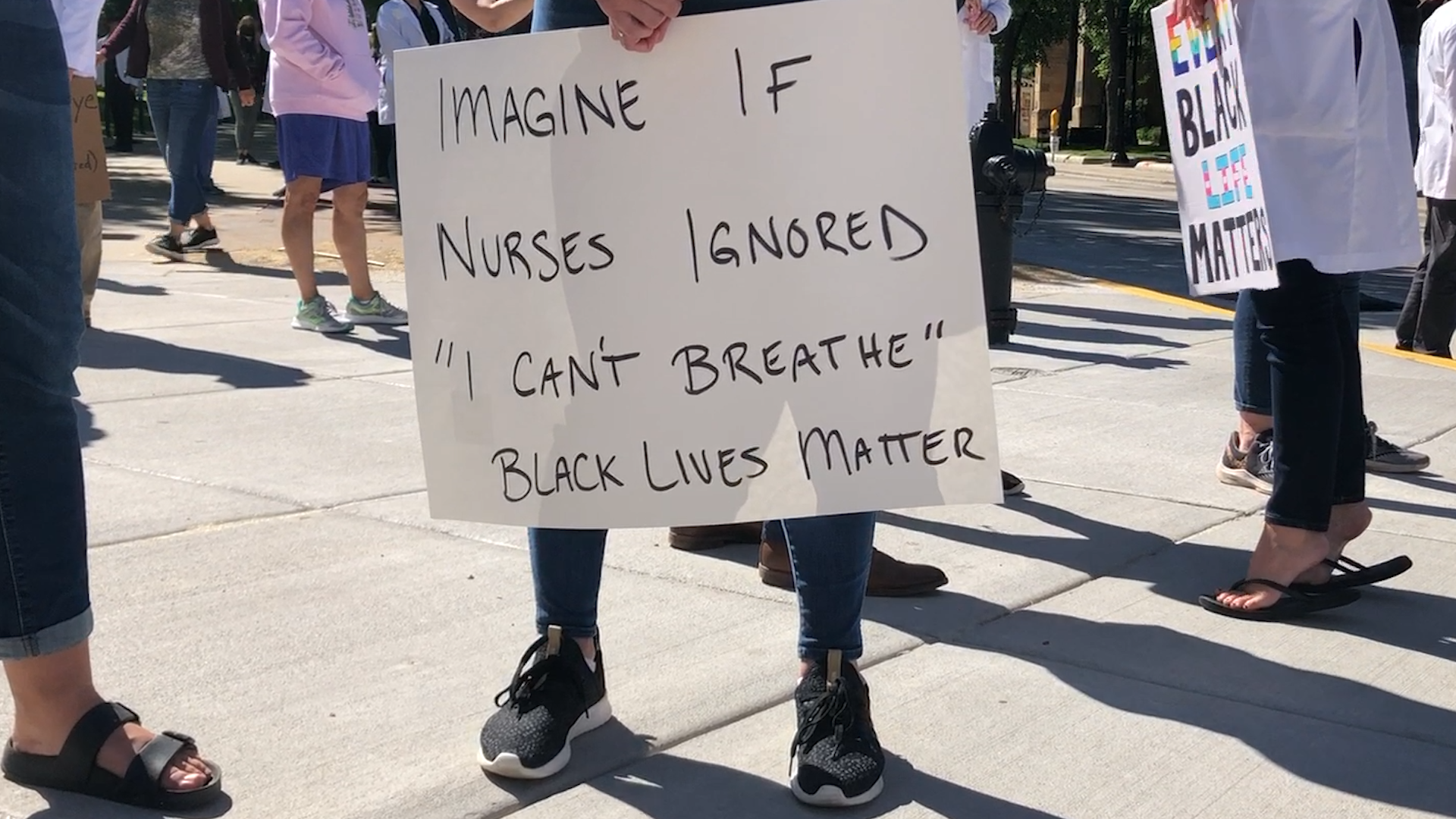 Zapata is a UW Health pediatrician and adviser to the SNMA. She said the video of George Floyd’s death was heartbreaking to watch, especially as a doctor able to identify his body shutting down. “Especially when he yelled out ‘I can’t breathe’ and no one did anything about it,” Zapata said. “We heard that call, and that’s why we’re out here today.”

Doctors and medical students spoke at the beginning of the rally. Later, medical providers listened to people tell their stories of discrimination in healthcare. One of the goals is to address implicit bias, so everyone gets equal treatment. 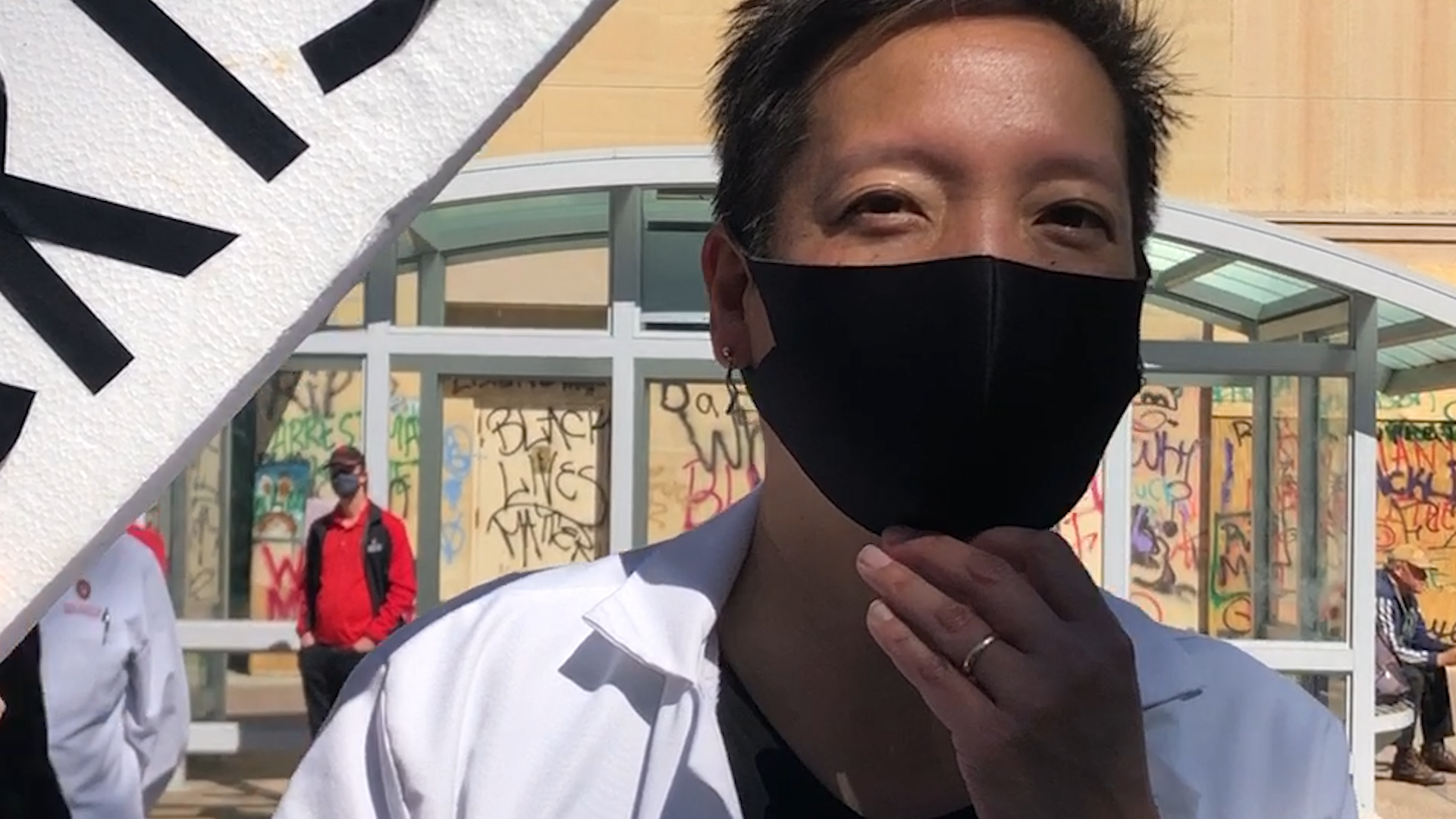 Dr. Jennifer Edgoose attended the rally. “I take care of a lot of African-Americans who are on the wrong side of the healthcare disparity equation,” she said. “I’ve had a 14-year-old young African-American boy in my clinic in shackles. I have had, in the past several months, an African-American woman who’s an amputee, whose police broke into her house and shot her dog in front of her.

Edgoose is a family physician. “Physicians just need to stand up and join protesters when it comes to police brutality,” she said.

There were some civilians there, by the end of the protest they were about one third of the group. 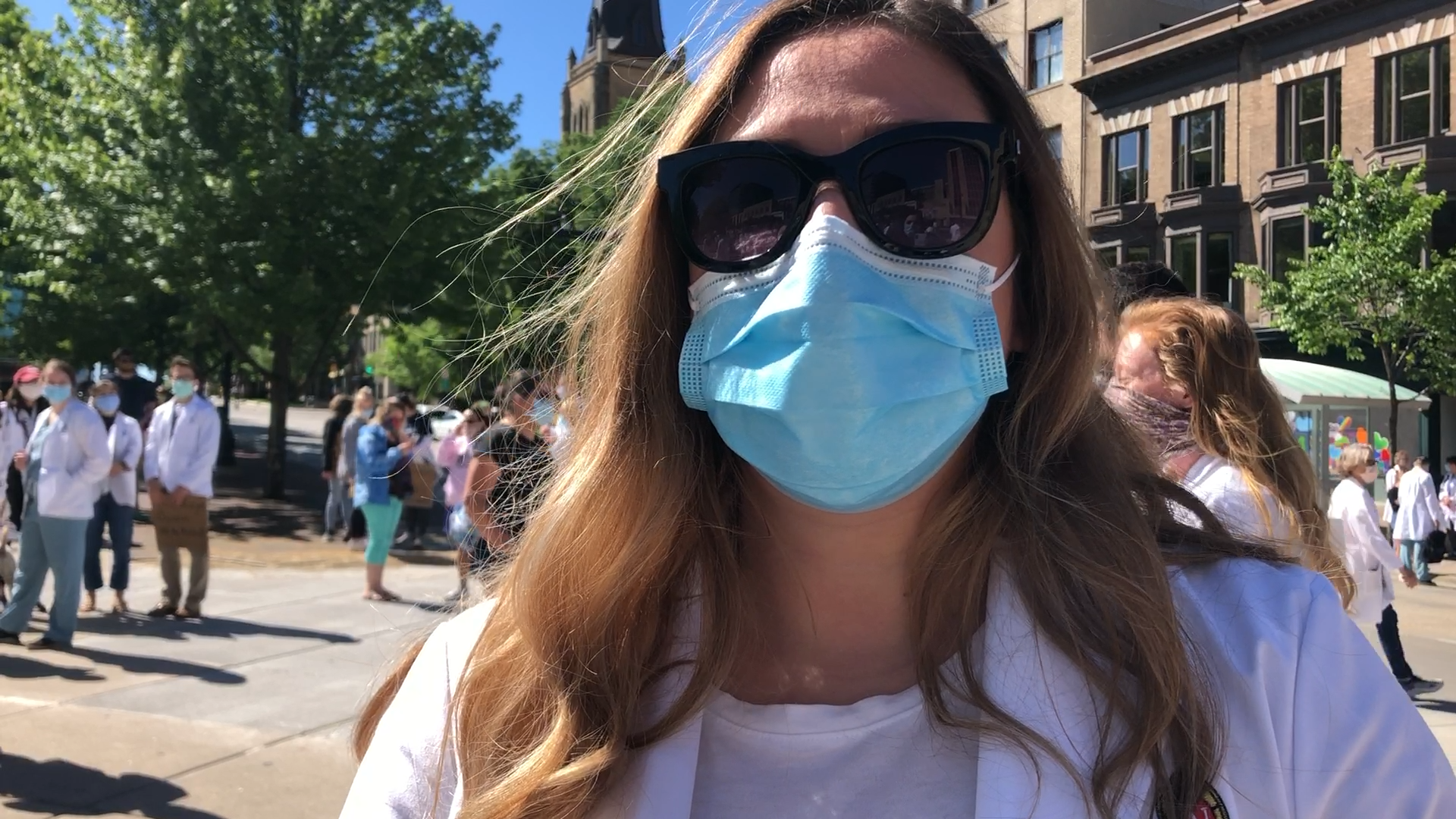 A big chunk of the protesters was made up of med students. “People of color, specifically Black patients, die at a rate so innumerable compared to white patients in all fields of medicine,” said Mia Prifti, who’s a UW-Madison medical student.

Prifti hopes her generation of doctors can be a force for change. “We need to recognize that these things will be going on our entire careers, and we need to work every day to fight against it,” Prifti said. “You’re talking about years and years of work. I’m so glad to see the turnout especially by our fellow medical students who are saying ‘we are willing to put in that work’.” 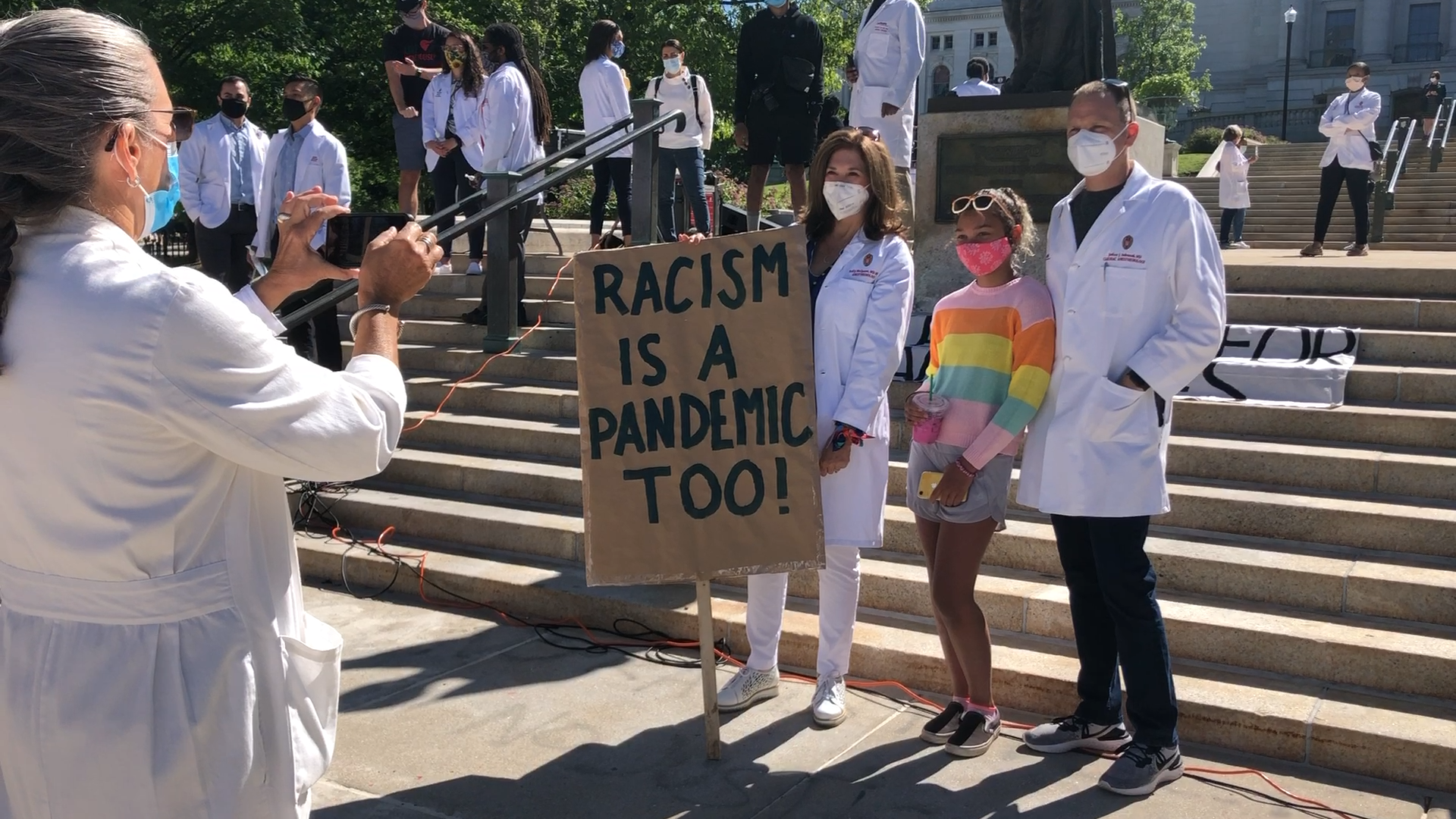 The overarching message: Racism is a public health crisis, and medical professionals play a pivotal role in solving it.

“We need more than just a moment of silence or doctors kneeling,” Zapata said. “We need to mobilize into action if we’re going to dismantle racism together with our community.” 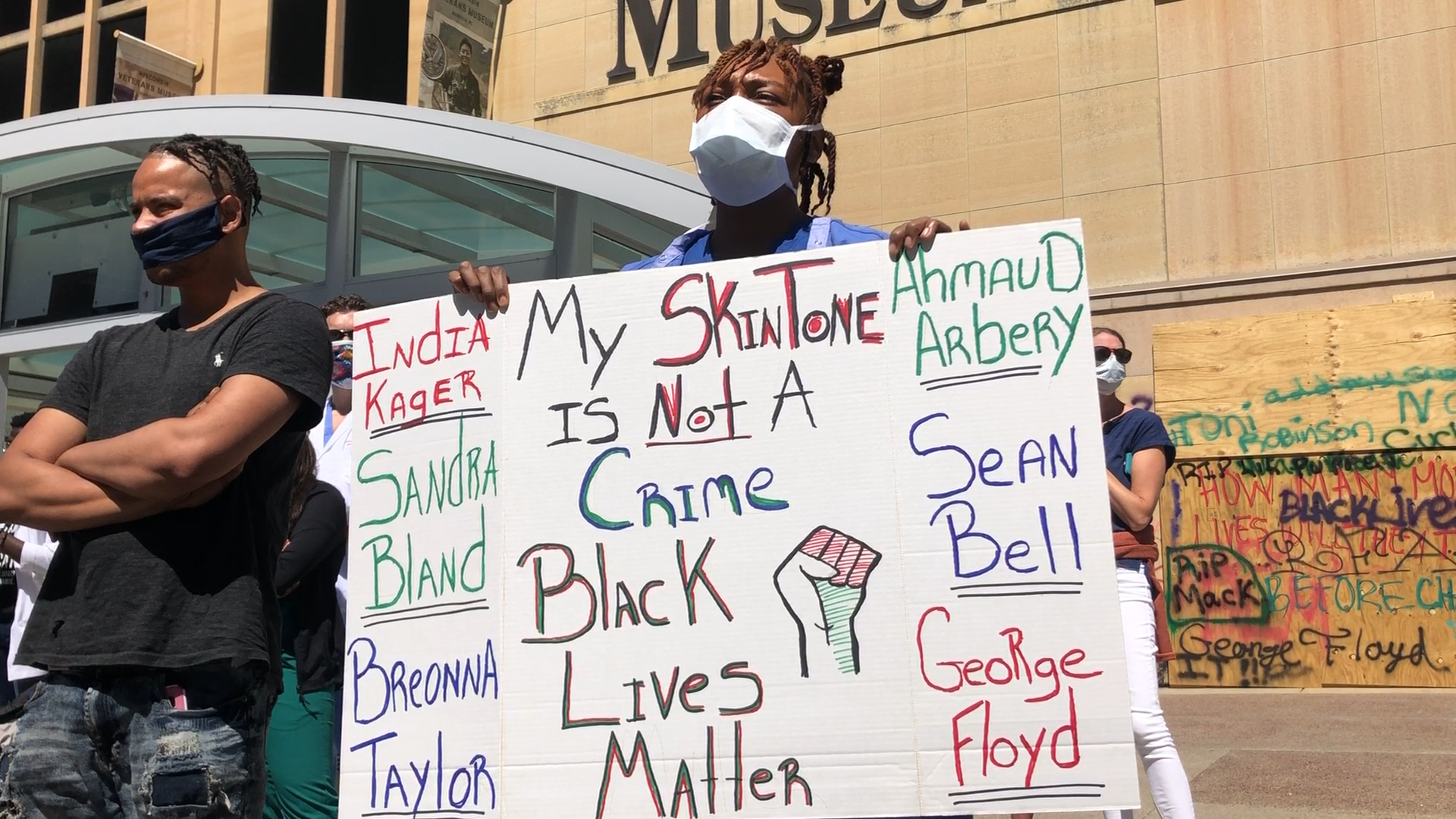