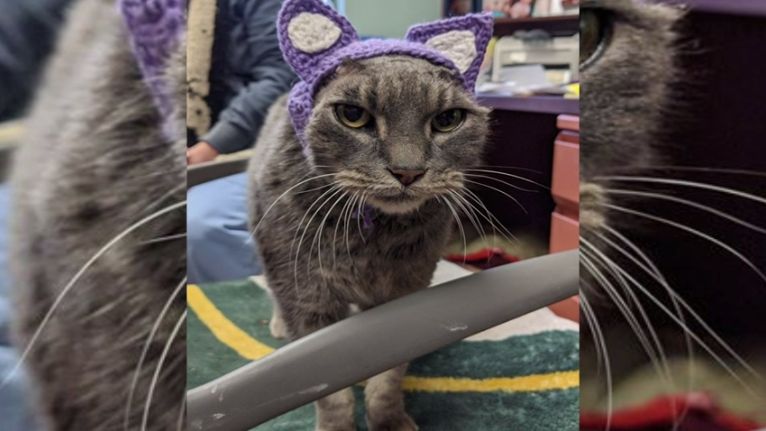 WEST ALLIS, Wis. (SPECTRUM NEWS) - A cat that gained attention all over the world has a new loving home.

In January, the Dane County Humane Society posted about a cat at the shelter who was missing her ears. It showed the cat wearing purple ears a staffer had crocheted for her, and people loved the picture. Soon the comment section was filled with animal lovers who wanted to take her home.

The humane society was calling her "Lady in a Fur Coat". They had to shave her head to treat her ears, so she got much fluffier starting at her neck, like she had a big warm coat on.

H Due saw the post on their lunch break at a veterinary clinic. “I saw this picture of this cat that didn’t have any ears ... oh my God, I need this cat."

Because Due is a veterinary technician, they knew exactly what "Lady" had been through. "The outer part of the ear is called the pinna, and hers were basically crumpled down," said Due. It's likely the cat had chronic and painful ear infections. "The only way they could treat the ears was to take them off."

They acted fast. "We had her coming to us within like four hours of this post," said Due. "I needed her. Immediately!" Due said. They're glad they reached out so quickly. Later the comments section would be filled with people who wanted to adopt her.

Once they took her home, they started brainstorming names. Eventually "Nora No Ears" grew on them, and it stuck. Her newest nickname is "Nora Jean The Earless Queen".

Nora joined their other animals at home. H has some reptiles, plus another cat, and a dog. "I like animals with missing parts," said Due. Their dog Jelly only has one eye. Their other cat Doodles is gorgeous and otherwise healthy, just mean. They needed another cat who could fall into line and let Doodles be in charge.

Nora is the perfect foil to Doodles. "Nora, Nora," Due nudged the cat, but she wasn't having it. "Can you get up?" They coo to Nora. "She says no, I'm so tired." Nora had been on that couch pretty much all day. "I'm not joking, this cat sleeps constantly." At first they thought something could be wrong with her, an illness making her lethargic. But other than missing a set of ears, she had a clean bill of health when Due ran all the tests at their veterinary clinic.

Nora can hear just fine. Her ear canal and eardrum were healthy, just the ears themselves were scarred and painful.

Because Due and Simonson had adopted Nora just hours after the Facebook post, it kept spreading for days as she got used to her new home. It ended up going viral, especially in animal groups. "Bored Panda, I think, she was on CNN," said Due. “People posting about this cat that doesn’t have ears, and I was like ‘oh my God, that’s our cat’.”

Nora was on websites and newscasts around the world. “I have a friend in Australia ... and she was like ‘I saw your cat on the news!’” It caught Due and Simonson off guard. “I was like... I don’t even know how this is happ-" they pause, kind of flabbergasted thinking about it. "This is so weird!"

"Nora No Ears" now has a social media following. Due said they would've made an Instagram for her no matter what. "I'm just that kind of person," Due laughed.

More important than the notoriety, Nora now has a loving home. "We got her because we love her."

Due and Simonson hope Nora’s story encourages other people to adopt senior pets or pets with “quirks” like hers.