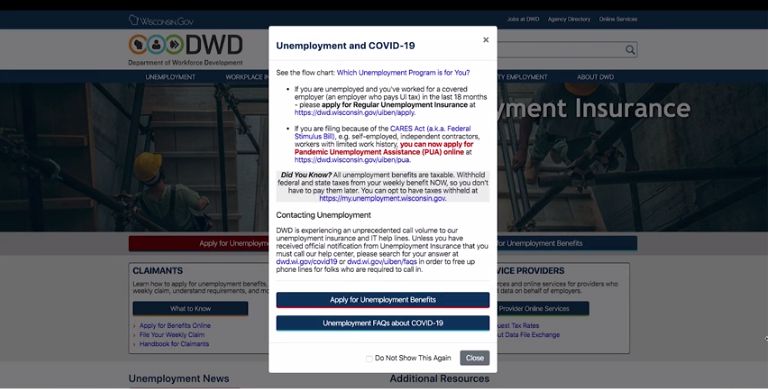 NEENAH, Wis. (SPECTRUM NEWS) — There was a time when Wisconsin business were have difficulty finding qualified workers to fill open positions.

Two months and one pandemic later, hundreds of thousands of residents are out of work and businesses across the state are facing the very real possibility they may not reopen.

To deal with the seismic shift in the employment landscape, the Wisconsin Department of Workforce Development and its partner agencies have been adjust to deal with the crush of unemployment applications.

A one week waiting period has been waived to allow people to receive payments as soon as they lose their job or hours; it’s also opened the unemployment insurance program to a wider swath of workers to allow them access to federal funds.

“Just this week the (unemployment insurance) system began accepting applicants who were contract workers, people who are 10-99, gig employees, the people who don’t get a W-2 but get a 10-99 on their taxes,” said Anthony Snyder, chief executive officer with the Fox Valley Workforce Development Board in Neenah. “They likely won’t get any state assistance because UI isn’t set up to pay any state benefits to gig workers or contracted workers, but the federal money is coming through that system.”

The Department of Workforce Development is urging people to apply online. Most people applying there have done so successfully — though some are encountering delays.

Applicants will also have to register with the Job Center of Wisconsin and file a claim each week they are unemployed.

The business impact of a society in suspended animation is hitting communities large and small.

“It’s the small retail business that  is the most affected out there,” said Gordon Crow, the executive director of Centergy - a central Wisconsin economic development organization based in Wausau. “It’s the small dress shop. The classic barber shop. The restaurant, either locally franchised or wholly owned locally restaurant that’s been shut down for the better part of five weeks now.”

Both Crow and Snyder say there are still a lot of unknowns.

“They don’t know, one, when they’re coming back, they’d like to have some knowledge of that so they can plan,” Crow said about restaurants. “But two,  they have no understanding now of what it will be like when they come back.”

Snyder says he doesn’t know what to expect when the now-closed job centers reopen and his staff gets down to work helping displaced workers get back on their feet. That’s due largely to businesses that closed for good without notifying the state.

“Of all the people who are unemployed out there, we don’t know which ones are temporary or which ones are permanent,” he said. “That means when the doors to the job center finally open once this Safer at Home period ends, I don’t if I’m going to see 1,000 people or 10,000 people.” ​