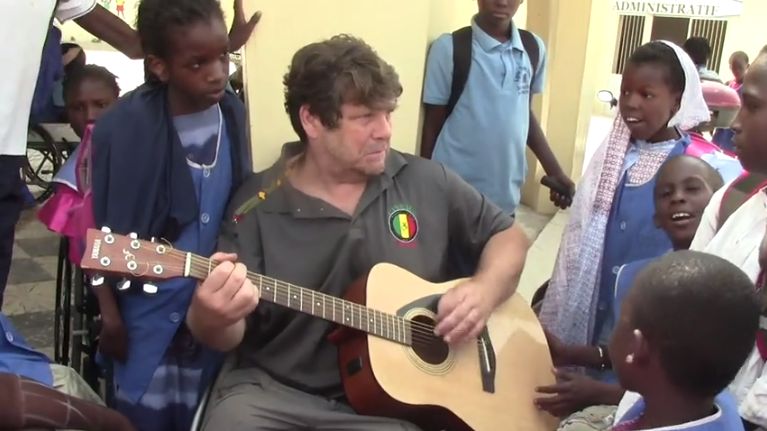 GLENDALE, Wis. (SPECTRUM NEWS) -- As the coronavirus pandemic swept the globe, many Americans rushed home fearing they might get stuck overseas.

Tom Haig is no stranger to change, but this week's change meant making it back to Wisconsin on the last US Embassy Emergency flight out of Africa.

For the past 3 months, Tom has been in Senegal Africa teaching kids with severe disabilities how to use the cameras, how to edit video, and how to create stories.

He was there as part of the International Rehabilitation Forum, a non-profit he runs with his brother, Dr. Andrew Haig.​

Unexpected change is just a part of Tom Haig's life. During his time at Nicolet High School, he was an All American diver(ranked 6th nationally), a two-time Braveland Conference champ, a two-time State Sectional champ, and a two-time All-Midwest selection. After college, he became a professional high diver and traveled all over the world.

Everything changed when a mountain-biking accident in 1996 left him paralyzed. But change never stopped him from succeeding as an athlete and it hasn’t stopped him from giving back. “ I gave my laptop back to my driver and they are waiting for the school to open. So they (the students) will have the capacity to keep it going. I was so sad... I just got so attached to these kids they went so much further than I ever imagined,” Haig says.

Amid the coronavirus outbreak, Tom’s life turned into a scene out of a movie. “I get a call from the embassy you have to come to the embassy right now..buy a plane ticket for 19-hundred dollars and then go right to the airport… which is about an hour and a half away from the Embassy and that was at 10’o clock in the morning. The plane was scheduled to leave at 3:15 pm,” Haig says.

“I get to the airport, the airport is closed except this one Embassy flight. I get on the line and they say your name is not on our list. This is crazy another moving scenario. Then I hear someone calling my name and I vaguely remember his face…it’s the US Ambassador,” he says.

Now, back in Glendale, Tom is in quarantine at a local hotel and taking in all the change with a positive attitude.

To find out more about Tom Haig and the International Rehabilitation Forum here.