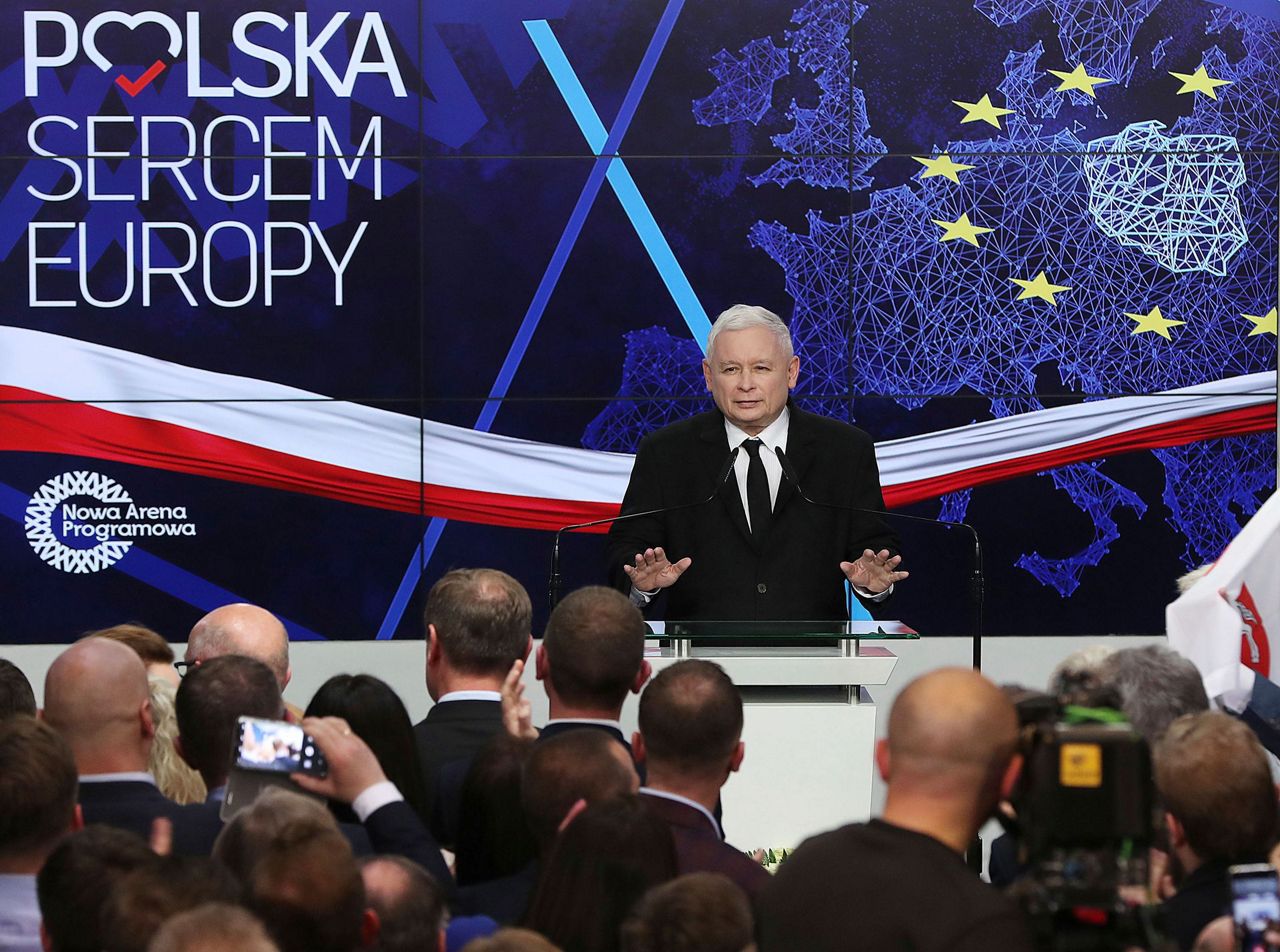 1 of 4
Jaroslaw Kaczynski, leader of PiS party ,Law and Justice, gives a speech after announcing the first results of the European parliament election in Warsaw, Poland, Sunday, May 26, 2019.The poster on the wall reads "Poland heart of Europe". (AP Photo/Czarek Sokolowski) 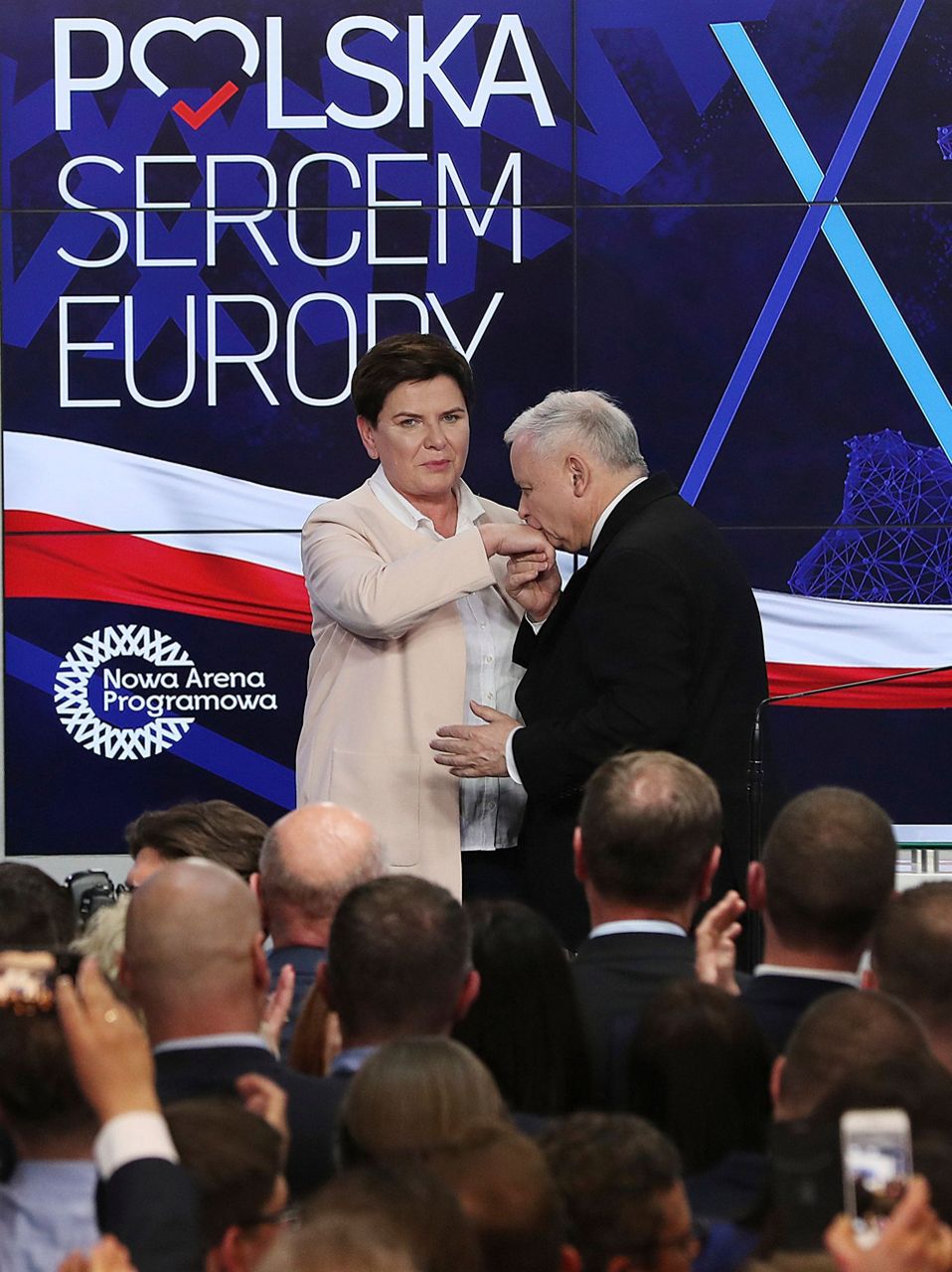 2 of 4
Leader of the Polish Law and Justice (PiS) ruling party Jaroslaw Kaczynski and deputy Prime Minister Beata Szydlo, left, reacts after the announcement of the exit polls of the European elections in Warsaw, Poland, Sunday, May 26, 2019.The poster on the wall reads "Poland heart of Europe". (AP Photo/Czarek Sokolowski) 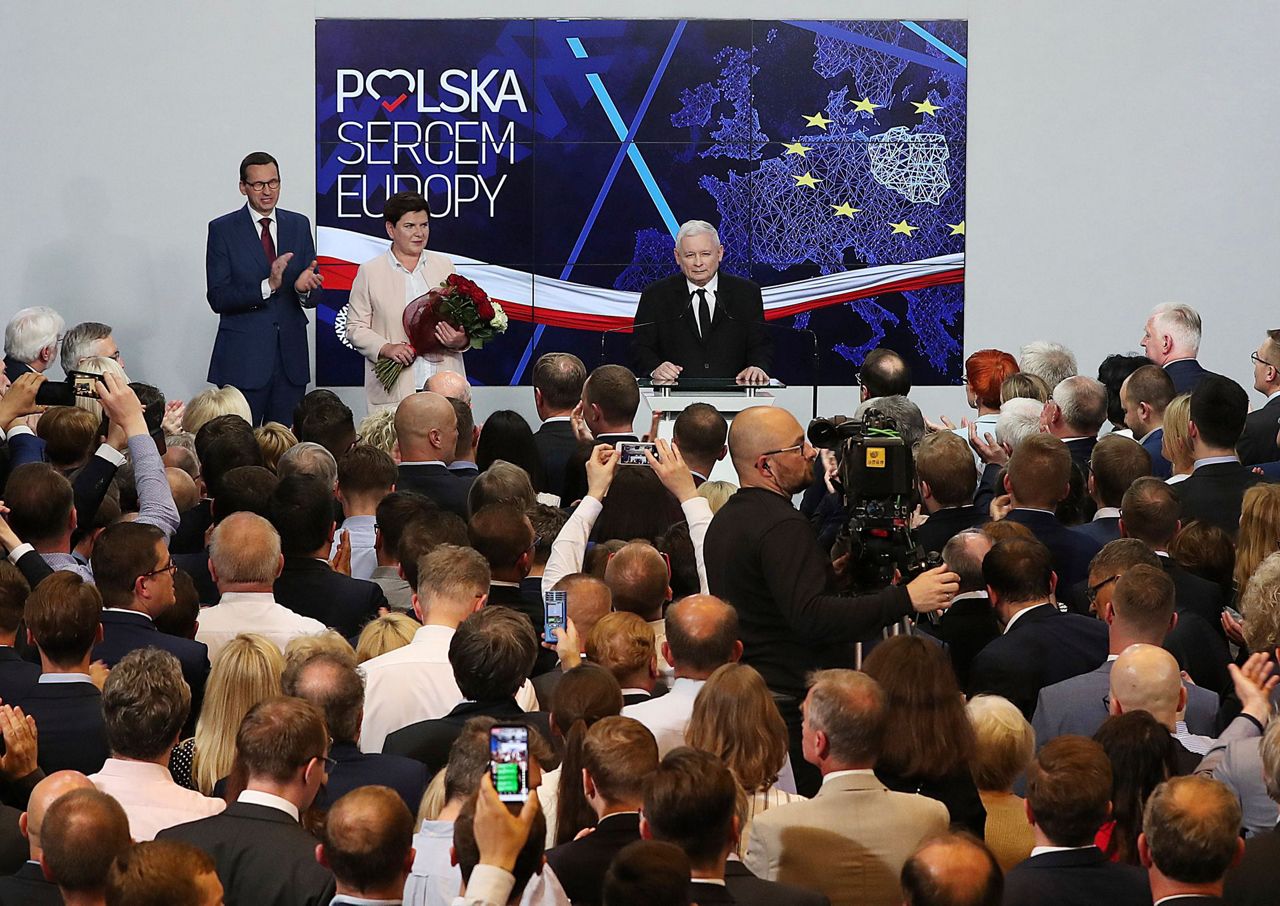 3 of 4
Jaroslaw Kaczynski, leader of PiS party ,Law and Justice, gives a speech after announcing the first results of the European parliament election in Warsaw, Poland, Sunday, May 26, 2019.The poster on the wall reads "Poland heart of Europe". (AP Photo/Czarek Sokolowski) 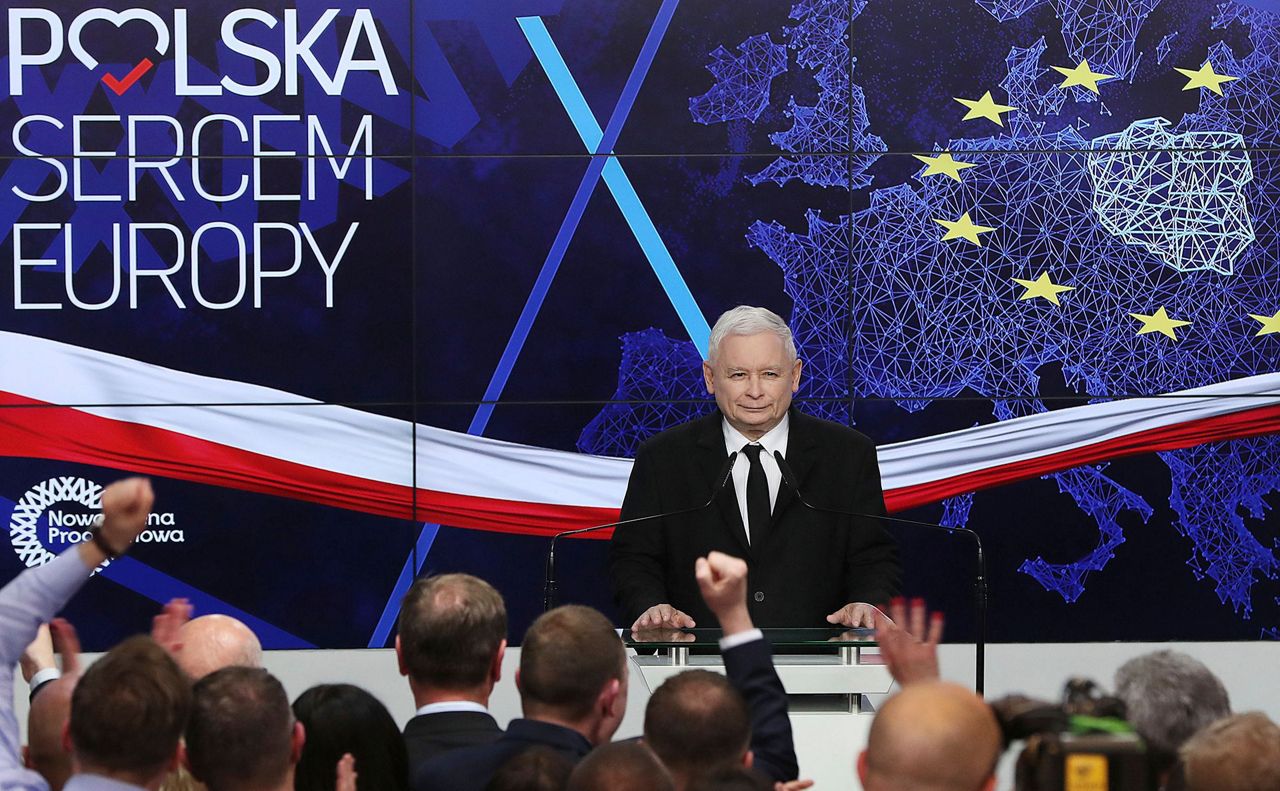 4 of 4
Jaroslaw Kaczynski, leader of PiS party ,Law and Justice, gives a speech after announcing the first results of the European parliament election in Warsaw, Poland, Sunday, May 26, 2019.The poster on the wall reads "Poland heart of Europe". (AP Photo/Czarek Sokolowski)

WARSAW, Poland (AP) — Poland's ruling Law and Justice party has emerged as the big winner in the country's European Parliament election, taking over 45% of the votes, but its leader said Monday more effort is needed before a national election later this year.

Full official results announced by the State Electoral Commission suggest that the right-wing ruling party has a good chance of winning crucial elections to the national parliament in the fall and continuing its policy of social conservatism and euroskepticism for a second four-year term.

It was the party's best showing ever in any election and, according to its leader, Jaroslaw Kaczynski, the best result for any party in the 30 years of Poland's democracy.

But Kaczynski said it "does not mean that the matter of (future) power in Poland has been settled" and warned against resting on laurels.

Analysts said the intensive campaign, with Kaczynski's active participation and quick containment of crises — from leaders' business dealings to revelations of child sex abuse by priests — mobilized its voters and defenders of the Catholic Church, and contributed to the party's showing.

"This is an impressive victory for Law and Justice given the number of crises that could have potentially damaged its image and the fact that voters were assessing its almost four years in power," said sociologist Jacek Kucharczyk, head of the Institute of Public Affairs think tank.

The Polish ruling party has a difficult relationship with the EU, which has put the country under scrutiny for what it sees as an attack on rule of law from new legislation governing the appointment and regulation of the judiciary.

The biggest vote-getter, with more than 500,000 votes, was former prime minister Beata Szydlo, who is remembered for launching the government program of benefits for large families in 2016.

The ruling party's win signals a government reshuffle in the coming weeks. Some current ministers have won seats.

Kucharczyk also praised opposition leader Grzegorz Schetyna, of the Civic Platform party, for forming the European Coalition of center-left parties that won over 38% of votes and is the only political force capable of challenging Law and Justice in the fall elections.

Backed by the opposition, Magdalena Adamowicz, the widow of slain Gdansk mayor Pawel Adamowicz, won a seat on a campaign against hate speech.

The strong showing for the opposition is where Poland's politics differ from those in Hungary, where the anti-migrant Fidesz party of Prime Minister Viktor Orban was dominant by a large margin.

Poland has 52 seats in the 751-seat European Parliament, of which Law and Justice will take 27 and Schetyna's opposition 22. The new Spring party of LGBT activist Robert Biedron has won 6% of votes and three parliament seats.

Law and Justice is expected to seek coalition with conservatives from the other 27 EU nations, however the leader of Italy's right-wing populist League, Matteo Salvini, has not named Poland as a coalition partner.

Amid calls from all sides for participation, the turnout figure was an unusually high almost 46%.

President Andrzej Duda, who is politically close to Law and Justice, said the high turnout gave Polish lawmakers a strong mandate in the European Parliament and showed the "maturity of our society, it shows that our democracy is getting stronger."

For more news from The Associated Press on the European Parliament elections go to https://www.apnews.com/EuropeanParliament