UW Oshkosh alumni TJ Hobbs (left) and Bowen Hobbs (right), with one of the Hope Fridge setups behind Wagner Market in Oshkosh. (UW-Oshkosh)

There is hope: UW-Oshkosh graduate starts Hope Fridge, and it's making a difference in the Fox Valley

There were days when TJ Hobbs worked from 6 a.m. to 10 p.m, sometimes holding down three jobs at once.


Even so, it wasn’t enough. Not enough, after all the bills and rent were paid, to put food on the table.

“I’ll never forget the day I came home at 10 p.m. and I got in the shower and just cried,” said Hobbs, who identifies as they/them. “Realizing, ‘Oh my God, I have to do this again tomorrow and I still can’t pay for my life. Like, how much harder can I work?’

“I felt like there wasn’t really a way out of this and even if there were resources available locally, they were nine-to-five resources. And what a joke, to me, for someone working from before they open to after they close. I couldn’t have gotten in unless I worked less hours, and there was no way I would work less hours if they were available because I know I needed every hour of work that I could get. So absolute hopelessness is how it felt. And I felt trapped, and I felt like I was doing everything right, but I still couldn’t. I just couldn’t make it all work.” 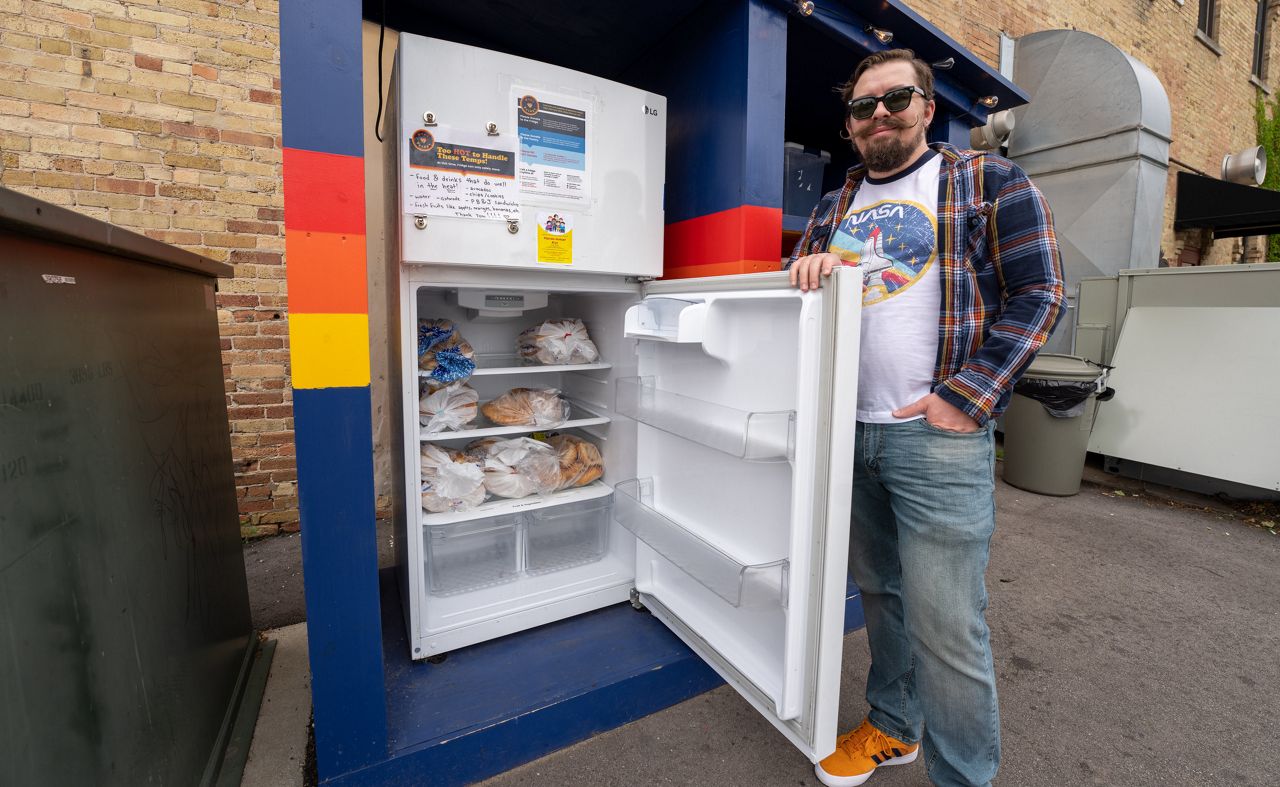 One of the Hope Fridge setups behind Wagner Market in Oshkosh. (UW-Oshkosh)

Today the native of New Holstein and graduate of UW-Oshkosh is working to ensure others will not have to endure what she did.

In 2021, Hobbs and a group of like-minded volunteers started Hope Fridge in Neenah, the first community food and hygiene program of its kind in the Fox Valley. They have since added two locations in Oshkosh. It’s a community-run mutual aid project that requires no paperwork.

Each location has a refrigerator and wooden shelter for hygiene products. Volunteers staff the locations, two of which are open 24 hours a day.

“The whole concept of the fridge is, you know where it is, and you’re hungry, by all means, please, if it’s in the fridge, take it,’’ said Lukas Shelton, one of the volunteers. “If there are three gallons of milk and you have five kids at home and you know you go through three gallons of milk, by all means, take it. The concern is if you need food, take it. No questions asked, no obligations. We don’t need to know your name. We don’t need to know how much food you’re taking. As a consumer of the Hope Fridge, your judgment is the best.’’

Hope Fridge functions like a nonprofit but is not a 501(c) 3 organization. It is partnered with the nonprofit Open Collective Foundation, which serves as its bank account and publicly manages its finances. This partnership enables all donations to be tax deductible. 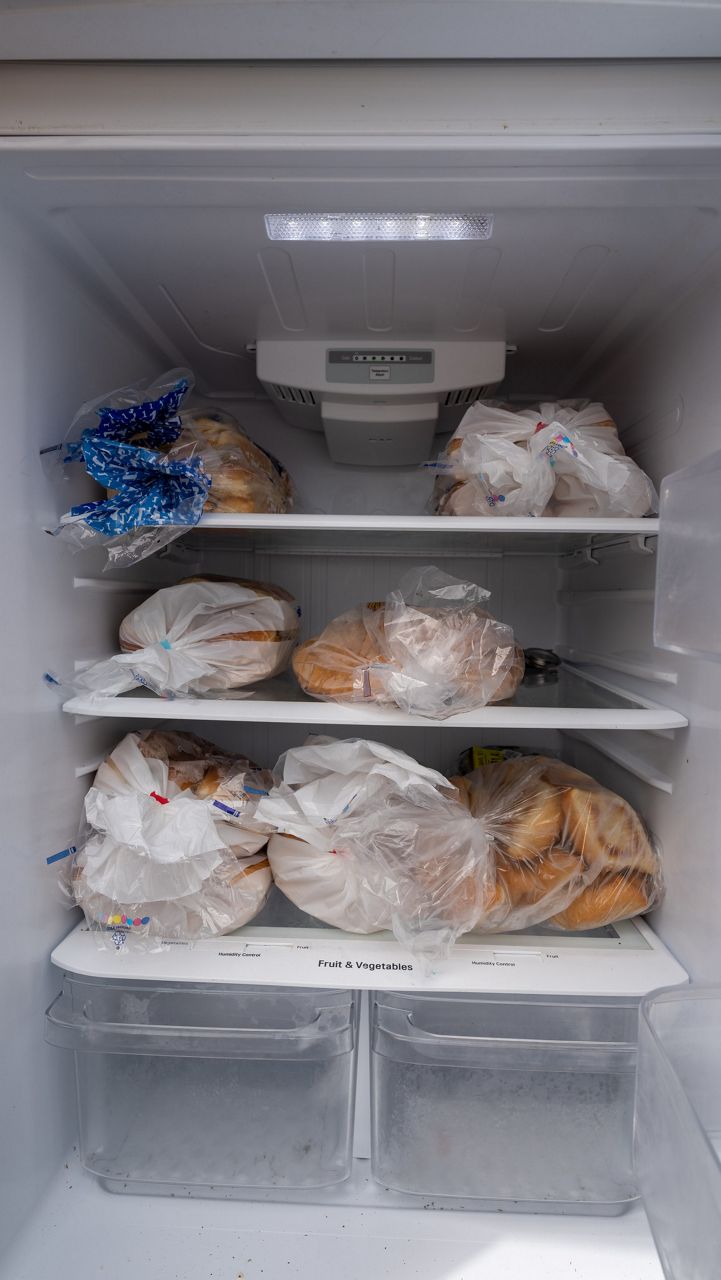 A look inside the Hope Fridge setup behind Wagner Market in Oshkosh. (UW-Oshkosh)

Hobbs learned of the idea from a friend on social media when she and her husband, Bowen, lived in California. When they moved back to Oshkosh, Hobbs contacted the people who run the Love Fridge in Chicago.

“And so our Hope Fridge build plans were inspired, literally, by the plans that were emailed to me by the Love Fridge in Chicago,’’ Hobbs said.

While Hope Fridge has received $16,000 in donations, Hobbs said over 90% of the donations they receive are from people who buy a little extra when they shop and then stop by a fridge and drop it off.

“I’ll tell you, Wagner Market (in Oshkosh), anytime a delivery happens, it’s not in there more than an hour, typically,’’ said Hobbs. “The need is so great is this area that anything folks can do to help, if you pop it in that fridge, it will get to people in your local community.”

Shelton said metrics have shown Hope Fridge has been used by 3,200 people.

“So it really is a community-oriented thing,’’ he said. “It’s not just us by ourselves. To me, it’s no longer just a group of people trying to figure out how to feed our neighbors. Quickly and quietly, we’re growing into a community taking care of itself.”

Few could understand the importance of this better than Shelton, who was homeless for two years.

“When it came time to the discussion for Hope Fridge, I was absolutely 150% behind it. I feel like a program like that, at a time where I needed something like that, would have been a godsend.”

Hobbs acknowledges Hope Fridge is a Band-Aid on a larger systemic problem, but is happy to provide that Band-Aid.

“It’s just being able to lay my head on the pillow at night knowing that I’ve tried to help and done the best I could,’’ Hobbs said. “It’s hard to go through that trauma and not want other people to never have to experience that, because it’s hell. It’s just hard. And it’s beyond hard.

“You know, it’s just living in it and realizing, ‘Oh, gosh, nobody’s coming to save us. Nobody cares.’ Other than us. Like, we have us. We care about us and we have to care about each other. Otherwise, things just aren’t gonna get better.”