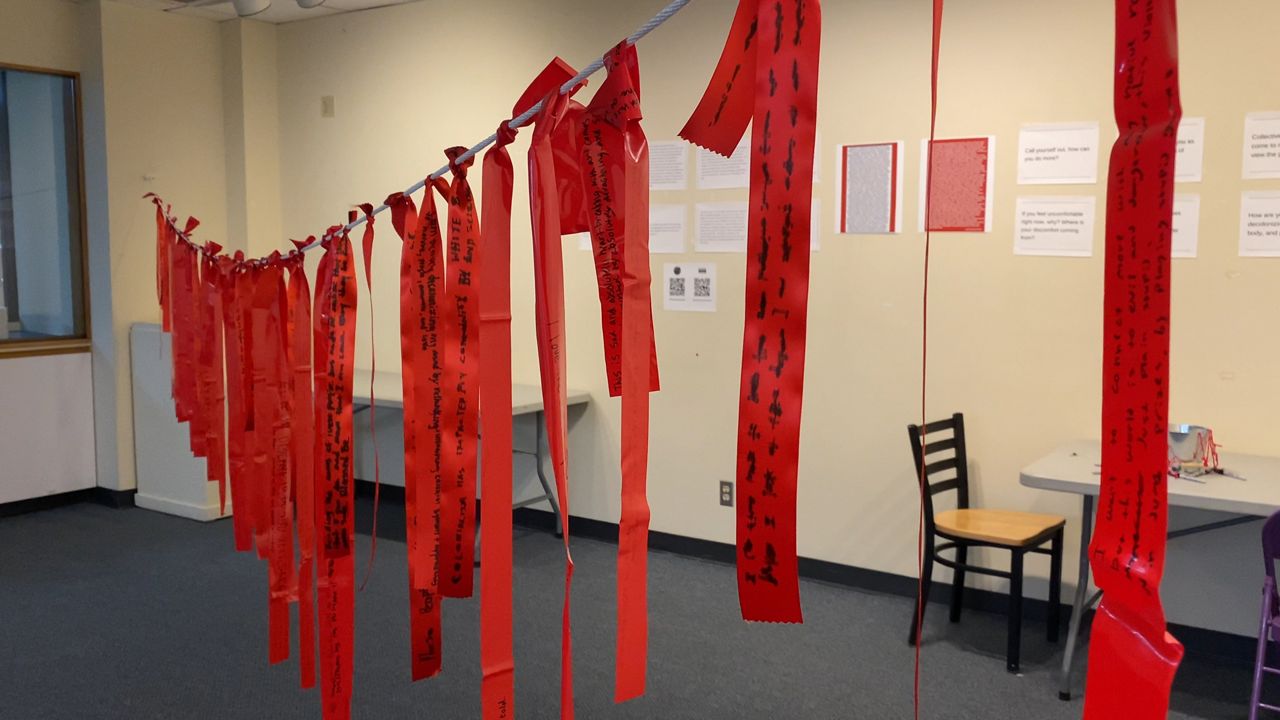 MADISON, Wis. — High schoolers in Madison have created an art and activism exhibit about gun violence, colonialism and their impact on Indigenous communities.

Otherwise, it would be a nondescript room in the middle of East High School. This week, it’s got a rope draped across the room, with ribbons tied around it.

“One of our mutual friends kind of had the idea for the exhibit,” said Aileen Kearney, the chair of East’s March For Our Lives chapter. “So I was just like, 'That's a really cool idea.”'

“On the wall, there's a list of names of people that have been impacted by MMIW, which stands for missing and murdered Indigenous women, girls, or Two Spirit people,” Fox Baker said. “And I think that list really connects to gun violence.”

There are prompts on the wall, such as, “Call yourself out: How can you do more?” Students will come down throughout the week, read the information, and add their thoughts to the rope and ribbons.

“Students can just like, choose one that speaks to them,” said Fox Baker. “Then they'll take a ribbon, they use a Sharpie, and reflect on the prompt, and we'll tie it up onto the rope.”

For many high schoolers across the country, gun violence is on their mind nearly every day.

“Especially with recent news, with the happenings in Michigan and stuff, it's really scary, for sure,” Kearney said. “That is exactly why I got involved in this. After Parkland, that’s kind of when I joined March For Our Lives. For me, it just fuels my drive to be involved.”

The exhibit also explores how colonialism impacts Indigenous people, especially through the lens of gun violence. Fox Baker is an enrolled member of the Colville Confederated Tribes. It’s an emotional subject for her.

The exhibit serves as a way for students to take a minute and reflect on gun violence and marginalized communities.

“The main idea of the exhibit is to do that internal reflection,” Kearney said. “That's my main hope, is just for people to think about how it looks in their own lives, and think about how it's impacted them and their identity.”

The exhibit will stay up through this week. After that, the students hope to move the ribbons to a display case in the school. They’re even considering transcribing what students wrote on them, and posting them online, to continue the conversation.