Never Give Up: After Years of Trying, Wisconsin Man with Cerebral Palsy Finds Employer Willing To Give Him a Chance​

OSHKOSH, Wis. — Cut away the periphery and it comes down to a basic need for all of us. You, your neighbor, the bagger at the grocery store; we all want the same thing — acceptance.

Now that doesn’t seem like a lofty goal, or one that’s necessarily hard to achieve, but so much depends on the cards we’re dealt, and how we choose to play them.

Brian Smith was born with cerebral palsy. He is confined to a wheelchair. He cannot communicate without the aid of a speaking application. That alone has made life difficult, and the struggles have sometimes been exacerbated by those who misplace the basic tenants of empathy and compassion when they meet.

Yet Brian has always forged ahead. He was a valedictorian of his high school class at Oshkosh West, an Eagle Scout, a proud owner of undergraduate and master’s degrees in leisure studies and event management from the University of Illinois, and is a first-team all-elbow rubber with those in the celebrity universe.

And now, at age 38, he has his first permanent job, is a contributing part of a team, is someone who can take jabs and land haymakers with his colleagues at the office and is finally finding the comfort and satisfaction — and pure joy — of just being Joe Lunchbucket.

“I think the one thing I like most about working here,’’ said Brian, “is that the rest of the employees treat me as a normal person.’’

Brian came along in Diane Penzenstadler’s life when the timing couldn’t have been worse.

“I was at a place in my life where I just couldn’t take any more on,’’ said Diane, owner of 44 North, an advertising and design agency.

Her father was sick and her husband was battling cancer. Her plate was overflowing. Yet here was Brian.

He had been working with the job coaching department at Lakeside Packaging, a local nonprofit that works with people with diverse abilities, who, in turn, had contacted Diane.

“Brian was sort of pitched to me,’’ she said. “They said, ‘This guy is special. He’s got game. You should really look at him.’ And they spoke so highly of him and it was, ‘OK, let’s give this a try.’

Diane runs a small shop with just six employees, one of those being her golden retriever Maxine — a.k.a. Office Max — who is a regular visitor. Training and indoctrinating a new employee is not only time consuming, but critical. She’s got to get the hiring process right.

Brian started the week Diane’s husband passed away. She checked in on her new employee when she could.

“The first week, when (Tara, a former employee) said, ‘He’s a little nervous. He thinks you have high expectations,’ and I started laughing,’’ said Diane. “I do. I know how smart he is. He’s smarter than I am. He’s got a better education than I do. I was like, ‘Yeah, you can do this.’”

Brian handles the social media account for a high-end business strategy client based out of Neenah and has also just been given the additional responsibility of producing a monthly company blog, along with various other duties. 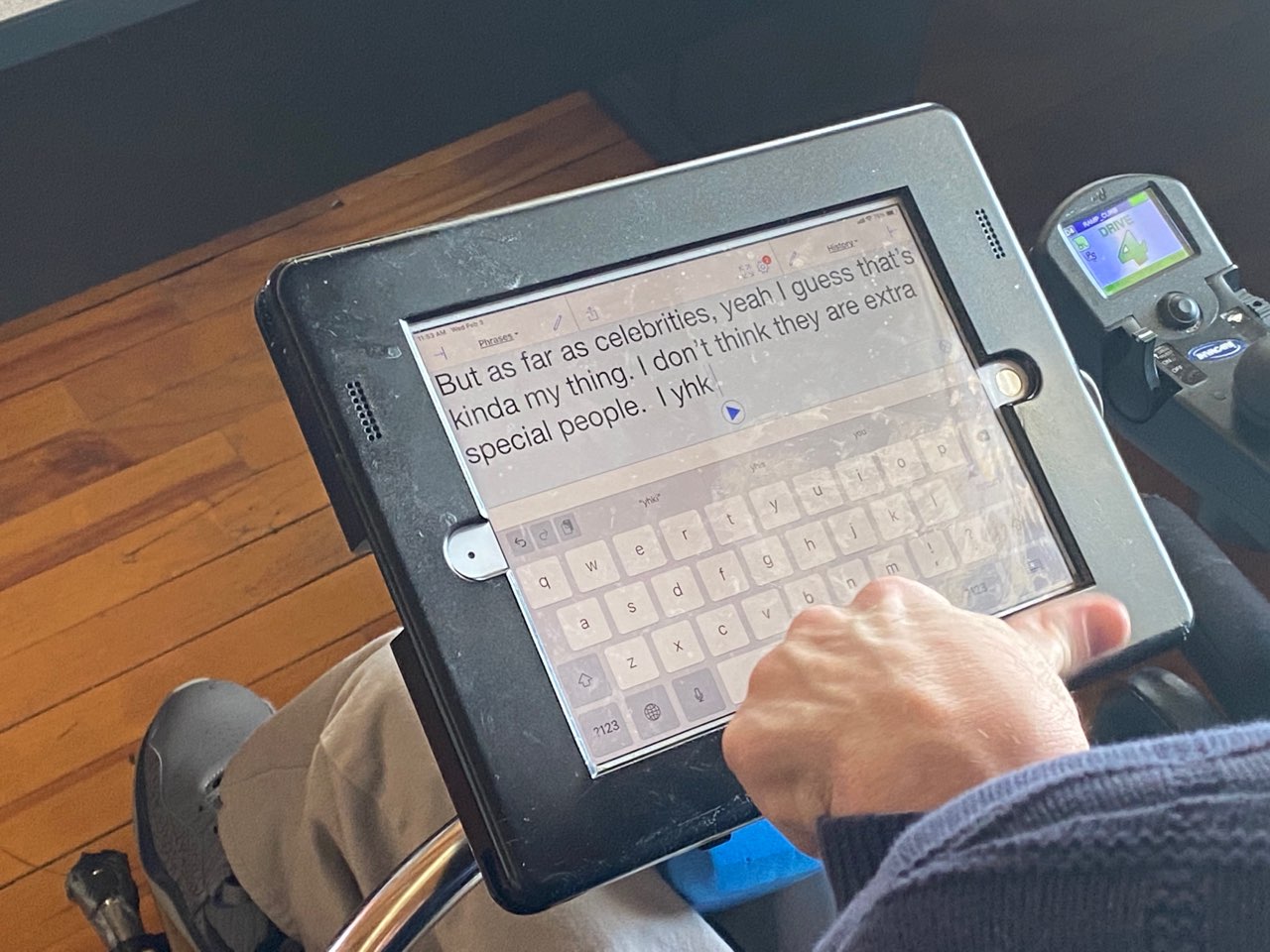 Brian demonstrating how he uses his iPad to communicate.

“When I first talked to you about the blog, you were like ‘Ahhh,’ and I was ‘No, you can do it,’’’ says Diane, turning to Brian. “He wasn’t sure about that. I was like, ‘Suck it up, buttercup. You can do this.’ I don’t make allowances when I know what somebody’s capacity is.”

Diane is equal parts demanding, understanding and compassionate. She also loves to poke the bear.

“The Queen?” says Brian, smiling, when asked about Diane. “I know where my bread is buttered.”

Brian, by his own admission, is a pleaser. But in Diane’s office, he’s also been an educator. So has William, a man with autism who Diane just recently took on to work on web development.

“I’m so proud of my team,’’ she said. “I think what it does is open up our minds and our hearts to the idea everyone is different. And we all have our limits and our abilities. Brian’s you can see. You can’t see mine necessarily, right?

“So I think for our whole team it just increases our awareness, our understanding, and our compassion as a whole team. And my team is great interacting with these guys. They treat Brian like dirt, just like they treat me; they don’t treat him any differently. That’s part of what he likes; he’s one of the guys. He fits right in. You’ve seen; I pick on him relentlessly. But that’s Brian.”

Yes, the celebrity thing. It began when Brian was 5 and he was sitting on the lap of the late Florence Henderson — you may know her better as Mrs. Brady from The Brady Bunch — for a public service announcement for the United Cerebral Palsy foundation.

“As far as celebrities, yeah, I guess that’s my kind of thing,’’ he said.

Taylor Swift, Carrie Underwood, Kelly Clarkson, Shania Twain and Toby Keith are just some of the VIPs he has met and spoken with through a meet and greet program. He has also met several ’60s artists at Beatlefest in Chicago. 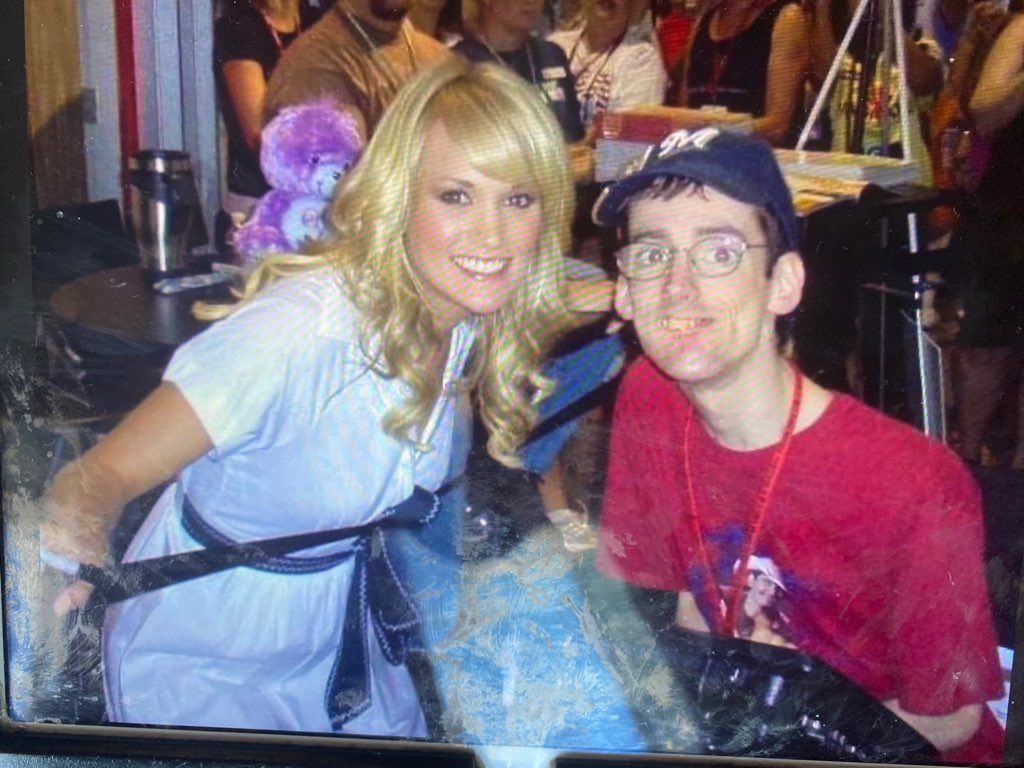 “I don’t think they are extra special people,’’ Brian said. “I think I just like meeting people. And it’s kind of nice to know how these people treat people like me. Some are very nice and sweet and some are just, I don’t know, not so much. But that’s how it is when communicating with anybody in the world.

“But, yes, I’ve had some pretty cool experiences.”

One of those happened to come at CMA Fest when Brian was in line to meet Taylor Swift.

“They were getting ready to cut the line off after me,’’ said Brian. “A couple of girls behind me started crying. They had been waiting for several hours. Especially since I had already met her, I gave up my spot to them.

“Well, after that, a security guard took down my address. I really didn’t think anything of it at the time. I was just happy to make those girls happy. A couple of weeks later a package showed up at my doorstep, open it up, it’s a signed (Taylor Swift) guitar.” 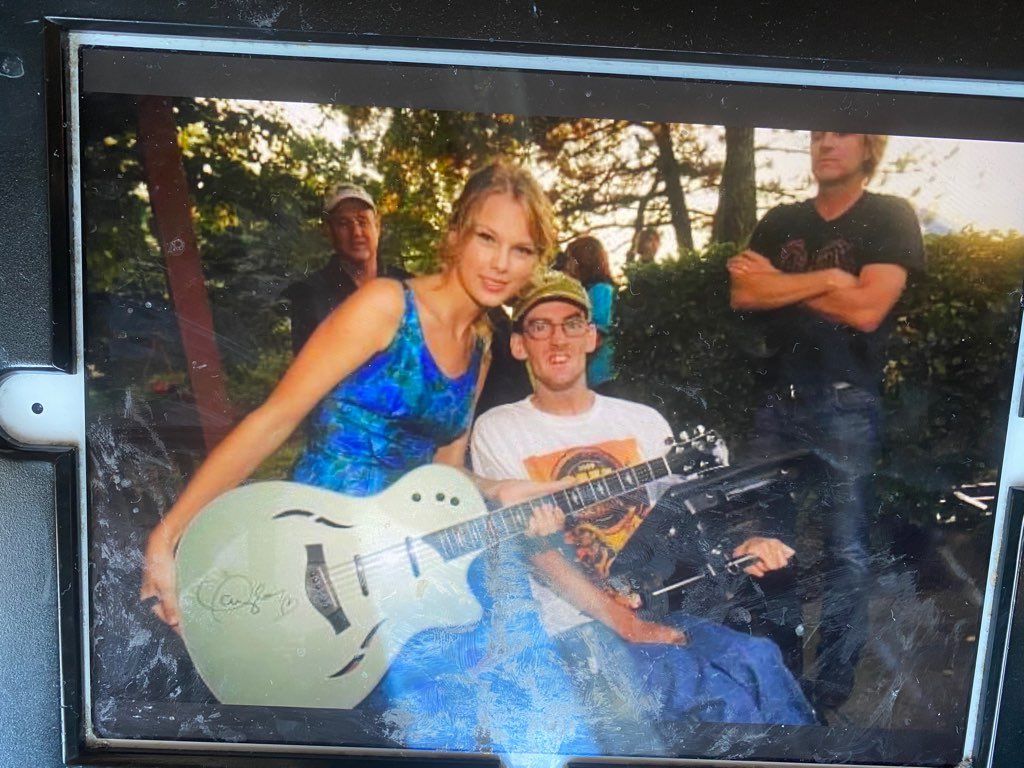 Brian with Taylor Swift and the guitar she signed.

Bill, Brian's father, also told the story of Jennifer Wayne, granddaughter of actor John Wayne, who is a member of the country group Runaway June and who befriended Brian years ago during a meet and greet. After a bad breakup with her boyfriend, she called Brian to cry on his shoulder.

“She contacted Brian and had to talk to him about love,’’ said Bill with a twinkle in his voice.

The journey to acceptance has never been easy for Brian. People, through ignorance, have chosen to make fun of him. So many others are just not sure how to behave when around him. And Brian is keenly aware of it all.

“I feel like they’re not quite sure how to interact with or handle a guy like me,’’ he said. “Even when I’m out socially, I can always tell when people are a little uncomfortable communicating with me, for whatever reason.”

Bill said it’s a case of people making assumptions, and usually the wrong ones.

“I’ll say he’s a graduate of the University of Illinois. He’s got his master’s degree. They’ll say, ‘A master’s degree? How the hell did he get that?’

“Then, they think — there are people out there and it will always be that way — people will just say they must have given it to him. You don’t just get a master’s degree; you have to work for a master’s degree.”

Brian’s job search has been equally frustrating. After college, his body began to undergo several physical changes, one of which was his tongue uncontrollably protruding from his mouth. He continued to bite it, and it gave him headaches.

“And it wasn’t very attractive looking,’’ he said. “So now I get Botox shots every three months that help relax my tongue. It involves a series of injections behind my ears, under my lip, and under my chin. Yes, it is kind of painful.”

The shots have in turn made it harder for Brian to chew, so a feeding tube is now his primary way of getting enough nutrition.

“Six cans of Ensure a day,’’ he said. “But I can still eat regular food. Thank God.”

Those same shots have also adversely affected his speech.

“I could actually use my voice fairly well most of my life,’’ he said. “Hence, the reason I use a speaking app now. The one thing I hate about these, though, is they usually don’t reflect my tone of voice or my sense of humor.”

The changes to his body, and thus his life, put a dent in Brian’s confidence. But he didn’t give up. He continued to try to find someone who would believe in him.

“I just remember being discouraged by the job listings and the required tasks, knowing I physically couldn’t do them all,’’ he said.

“Some of the employers were nice enough to go through the interview process with me, but I could tell I wasn’t what they were looking for which was frustrating. But as hard as it was, I did my best not to take it personally. Everybody gets passed over for jobs they know they can do. It’s part of life.”

There’s a certain tenacity to Brian. It may not be evident to the eye, but you can look at the time, ingenuity, and care he put into his Eagle Scout project, where he held a one-day adaptive workshop for the physically disabled in Oshkosh involving a variety of sports. There was nothing like it around at the time and the project turned out so good, the local rec department used it on a smaller scale for more than a decade.

He is also someone, who for the past several years, has helped coach basketball at Valley Christian, and the idea of being someone who lived on checks supplied by the government was something that just did not sit well. He wanted to earn his own paycheck.

He clearly had a lot to offer. But no one could, or took the time to see it.

Then along came Diane.

“I think the disabled market is a very untapped market that we, as employers, should seriously look at,’’ said Diane. “Because we need good employees and Brian is a good employee.

“He’s dependable, he shows up, he’s reliable, he tells people how wonderful I am, he’s very conscientious, he’ll communicate with me via Facebook messenger or e-mail if there’s something I need to know about. You can’t ask for more than that as an employer.”