KENOSHA, Wis.(SPECTRUM NEWS) — Carthage College students took to the streets of Kenosha Saturday, to protest the proposed plan to restructure 10 departments at the college.

The students protesting are upset because they say they feel there was a lack of communication coming from Carthage College.

“I’m upset about the lack of transparency from the administration and the president as well, we were told about a week ago and classes start in a month and a half," senior Megan Larson said.

Another factor that students find upsetting is the short notice the college provided regarding the potential decision.

“This is being pushed through just days before the financial part of your education is locked in and just a few weeks before school starts, which doesn’t give students time to transfer if the resources are no longer available at this college," senior Bradley Morell said.

The students potentially affected belong to departments in Science, Music, Liberal Arts and Humanities, and they said they feel like the school does not value their chosen majors.

“If these specific departments are the ones being targeted, instead of a blanket cut across the college,I think it's natural to make you feel they cut these for a specific reason, whether they don’t believe they’re valuable in the marketplace," added Morelli.

Those protesting also said they believe the cuts, which will result in losing professors, will affect the quality of the remainder of their coursework and experience at Carthage College.

“We don’t have very many professors to spare, if I lose any professors I’m losing one of three that could be my philosophy senior thesis instructor,” senior Noah Griser said. “I’m already not sure what I’ll be able to take in the fall and I might not graduate.” 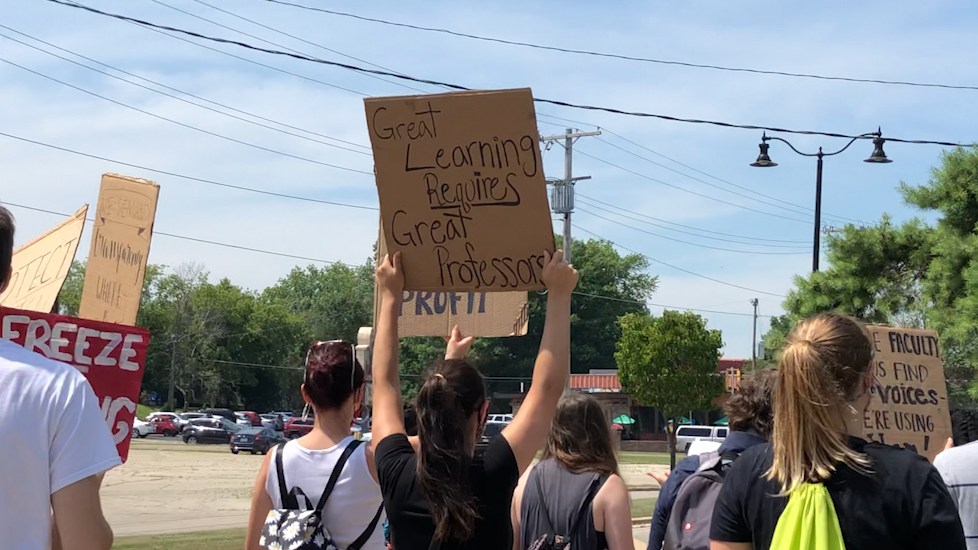 Seniors at the protest also expressed concern for the future of Carthage College students coming after them.

“I personally know three philosophy and great ideas majors who are going to be juniors so they still have two full years and they’ve been told their education won’t be affected, but that’s clearly not true." said Griser.

Spectrum News reached out to Carthage College regarding the proposal and protest, but did not receive a response as of Saturday evening.

The goal of the protest is that Carthage College considers their student's input and concerns, in their decision making moving forward.

“We just demand more conversation and more upfront information and for them to not be as behind closed doors with these meetings as well,” Larson said.