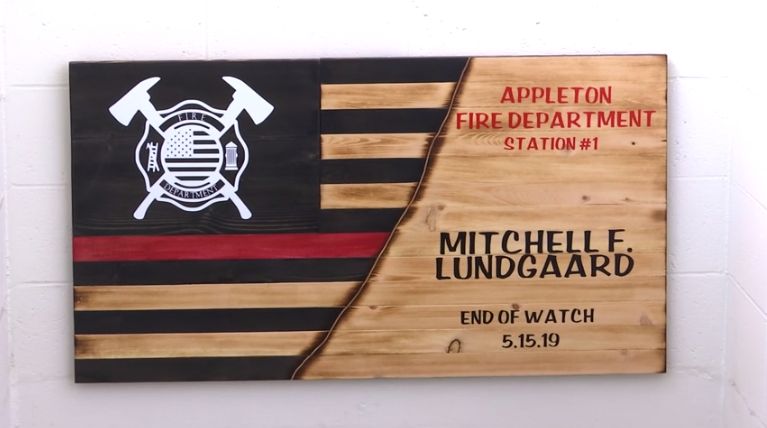 APPLETON, Wis. (SPECTRUM NEWS) -- The family of slain Appleton Firefighter Mitch Lundgaard is getting some comforting news this week.

The Stephen Siller Tunnel to Towers​ Foundation has announced they are paying off the mortgage on the Lundgaard's home.

The Tunnel to Towers was established in memory of FDNY Firefighter Stephen Siller who fell on September 11.

Tunnel to Towers Foundation wants the family of every firefighter to know they will be taken care of if the unspeakable happens.

"If you go out and you give your wife a kiss goodbye right and your kids a kiss goodbye and you don't come home because you died serving your community, we're going to take care of your family left behind," said Tunnel to Towers Chairman and CEO Frank Siller.

"When we heard about the sacrifice that Mitch made, that he was saving somebody else's life and then ended up giving his own, our foundation was born from the sacrifice of my brother who is a NYC firefighter who died on 911, we knew we should try to do something," said Siller.

Lundgaard was so deeply impacted by the attacks on September 11 that he left architecture school at UWM to pursue fire science at the Technology College in Milwaukee. Lundgaard was called to firefighting.

"They don't get paid a lot of money," said Siller. "They're there to serve. They serve us. They're willing to die for you and die for me."

A common trait among firefighters is to belong to a greater community and feel the need to serve that community.

"The brotherhood of the fire service is one thing that draws a lot of us to do this job," explained Appleton Fire Department Chief Jeremy Hansen. "We work together, we play together, and if one of us is injured, seriously injured and even killed, we take it upon ourself to make sure that family is taken care of."

The bond created between firefighters during their 48 hour plus shifts is a fellowship that transcends into the firehouse-life as well as outside of the fire department walls.

"It's a family, and I can't say that enough," explained Hansen. "It draws us to this organization. I know for myself; I love the fire department family. The atmosphere, the brotherhood, the sisterhood, and knowing at a moment's notice I can call one of them, and they would be there for me. You just can't measure that unless you're part of it."

Lundgaard made the ultimate sacrifice for the community of Appleton when he was tragically shot and killed while assisting on a medical call back in May.

Now, the firefighting community is giving back to the Lundgaard's wife and three young boys.

"It allows them to remain in the home where all the memories they have of Mitch will remain," said Hansen. "Whether they're shooting basketball hoops in the front yard, or if they're playing catch in the back yard, or if they're watching a simple movie in the living room, the kids can remember that. I think it's important they continue to relive those memories of their dad. He was an unbelievable man."