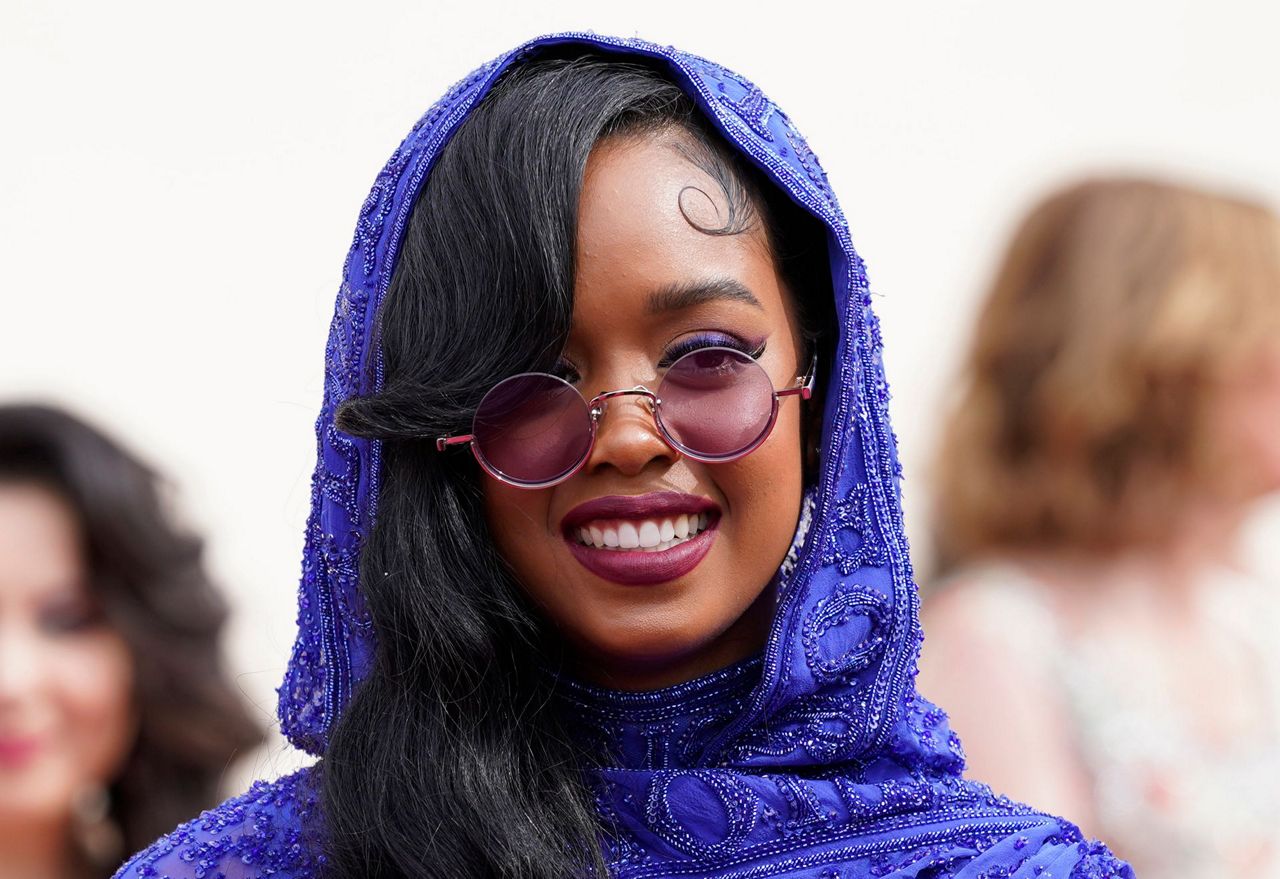 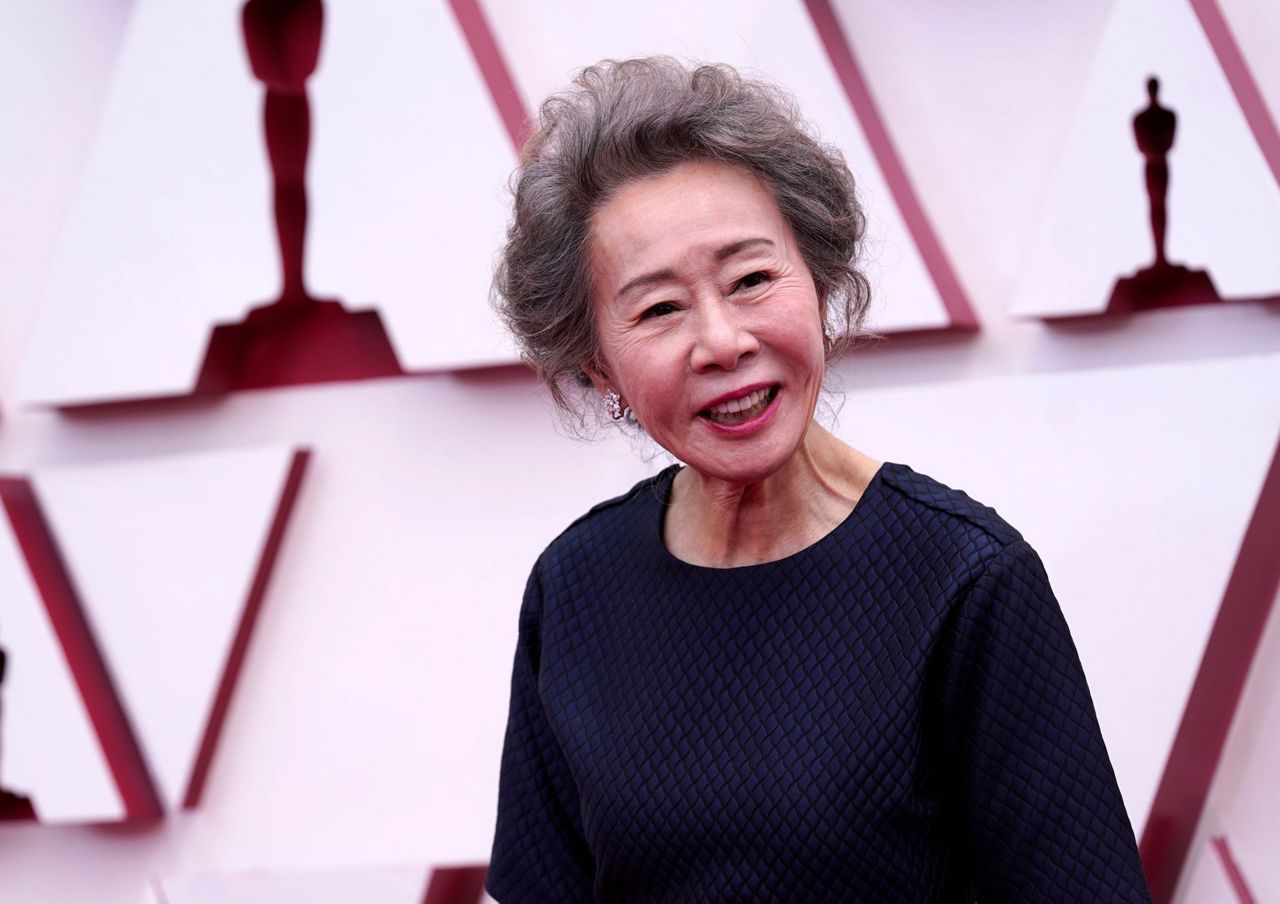 2 of 6
Youn Yuh-jung arrives at the Oscars on Sunday, April 25, 2021, at Union Station in Los Angeles. (AP Photo/Chris Pizzello, Pool) 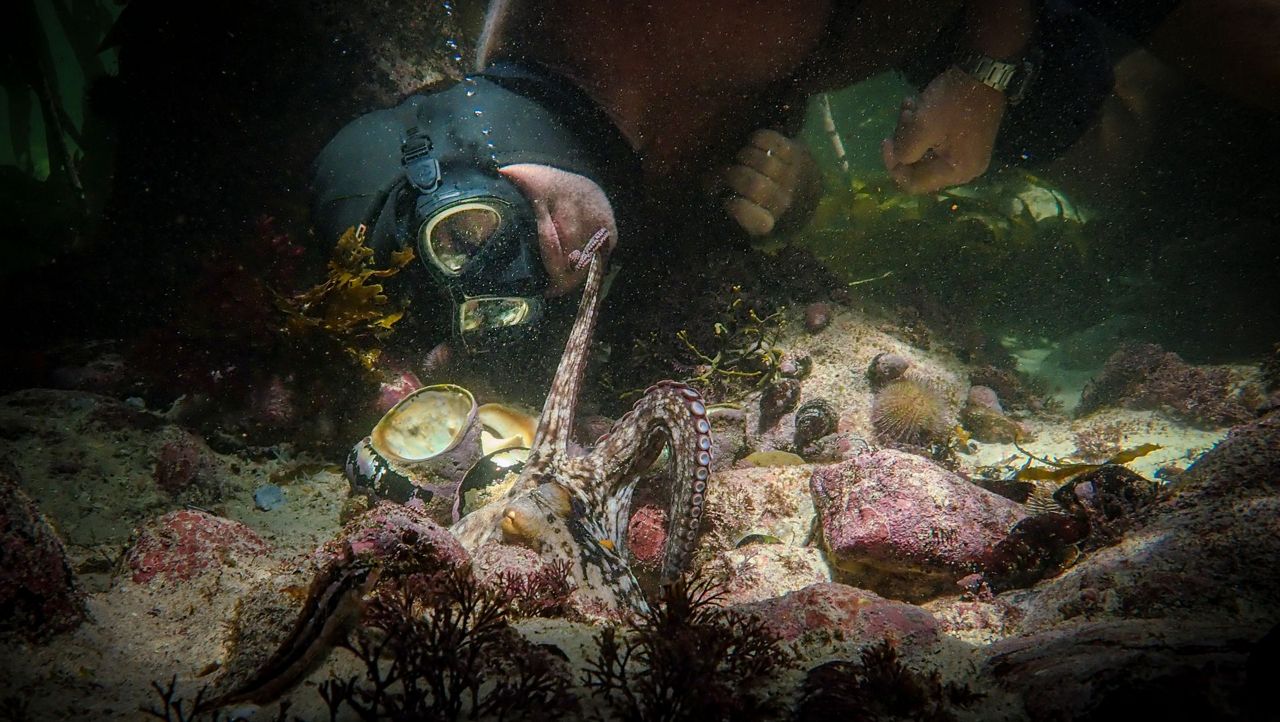 3 of 6
Craig Foster interacts with an octopus in a scene from the documentary "My Octopus Teacher." (Netflix via AP) 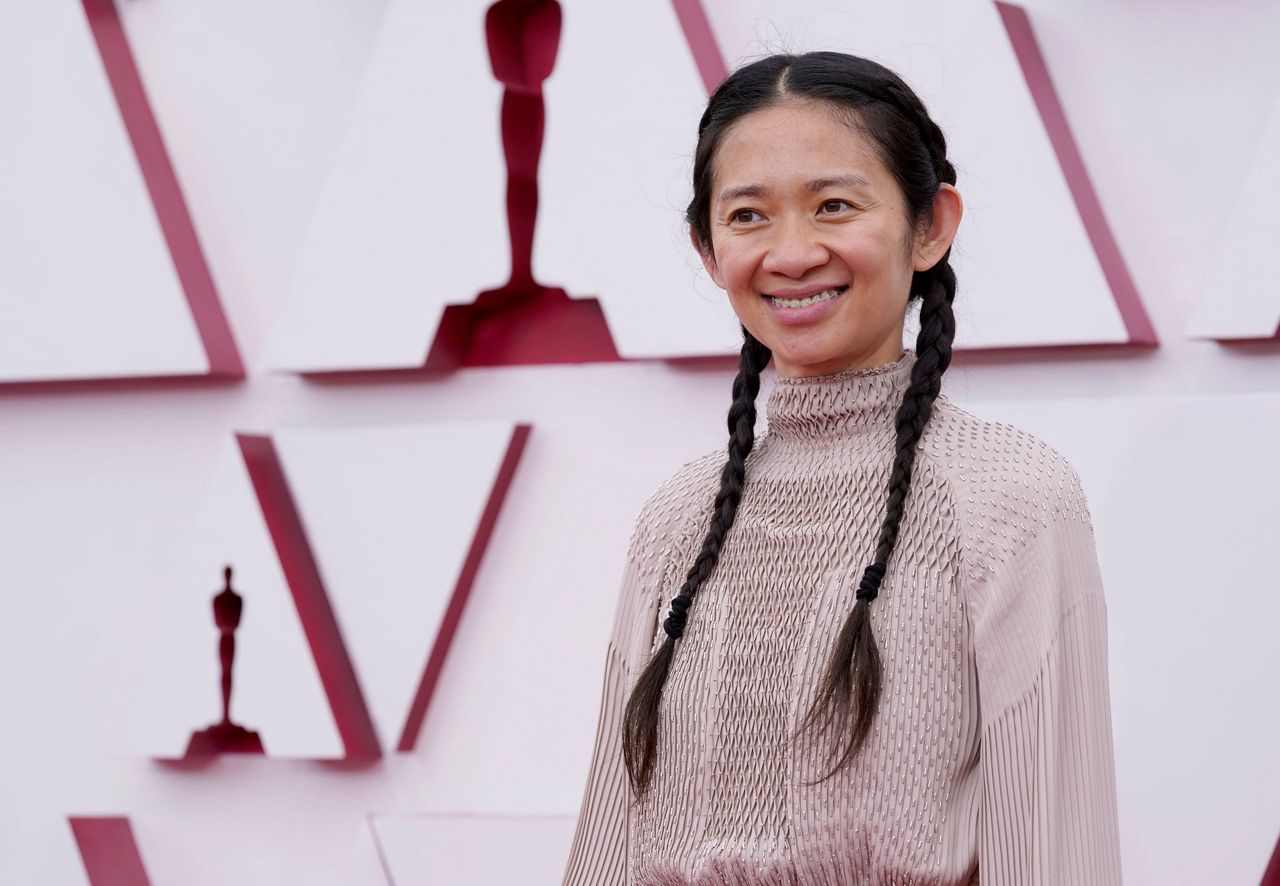 4 of 6
Chloe Zhao arrives at the Oscars on Sunday, April 25, 2021, at Union Station in Los Angeles. (AP Photo/Chris Pizzello, Pool) 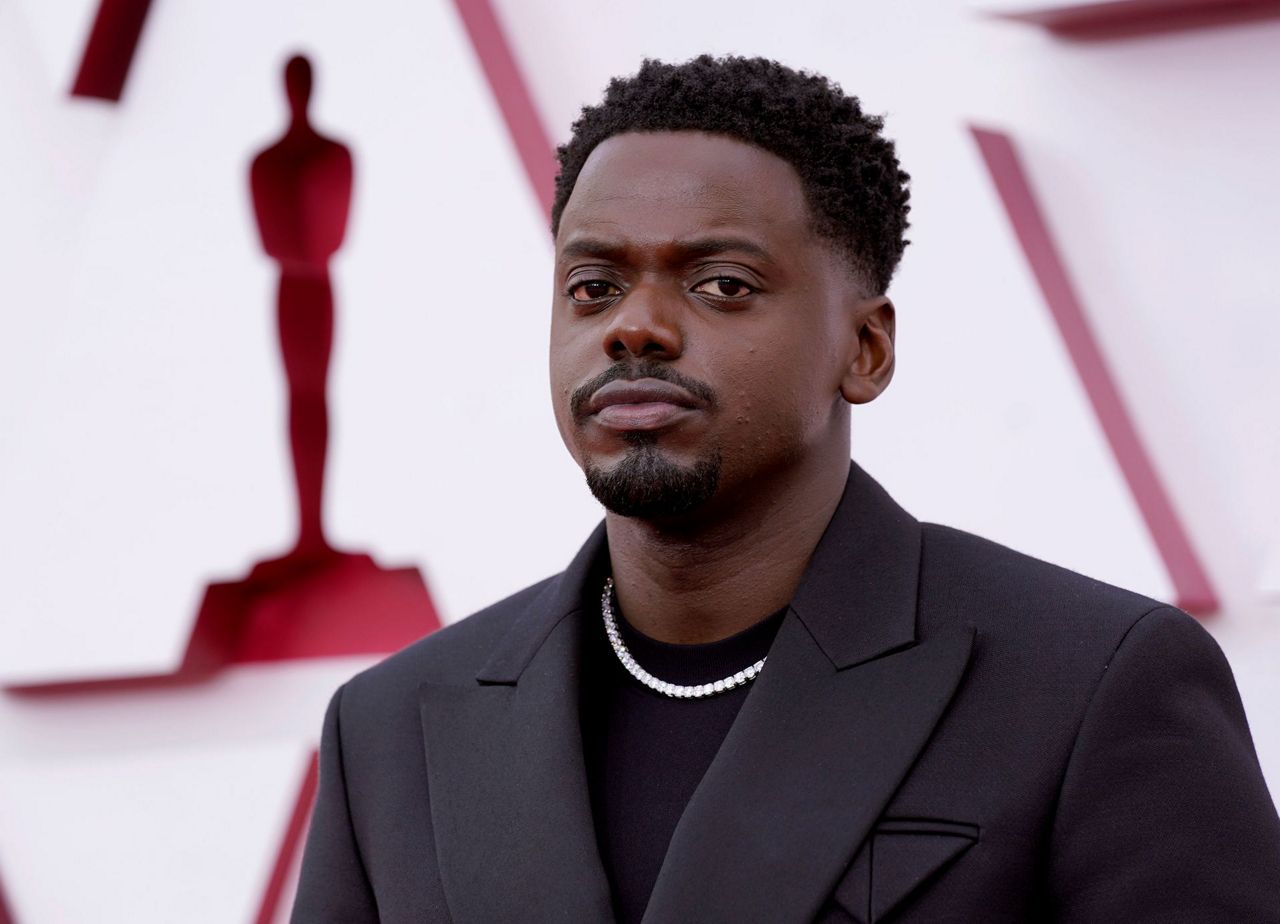 5 of 6
Daniel Kaluuya arrives at the Oscars on Sunday, April 25, 2021, at Union Station in Los Angeles. (AP Photo/Chris Pizzello, Pool) 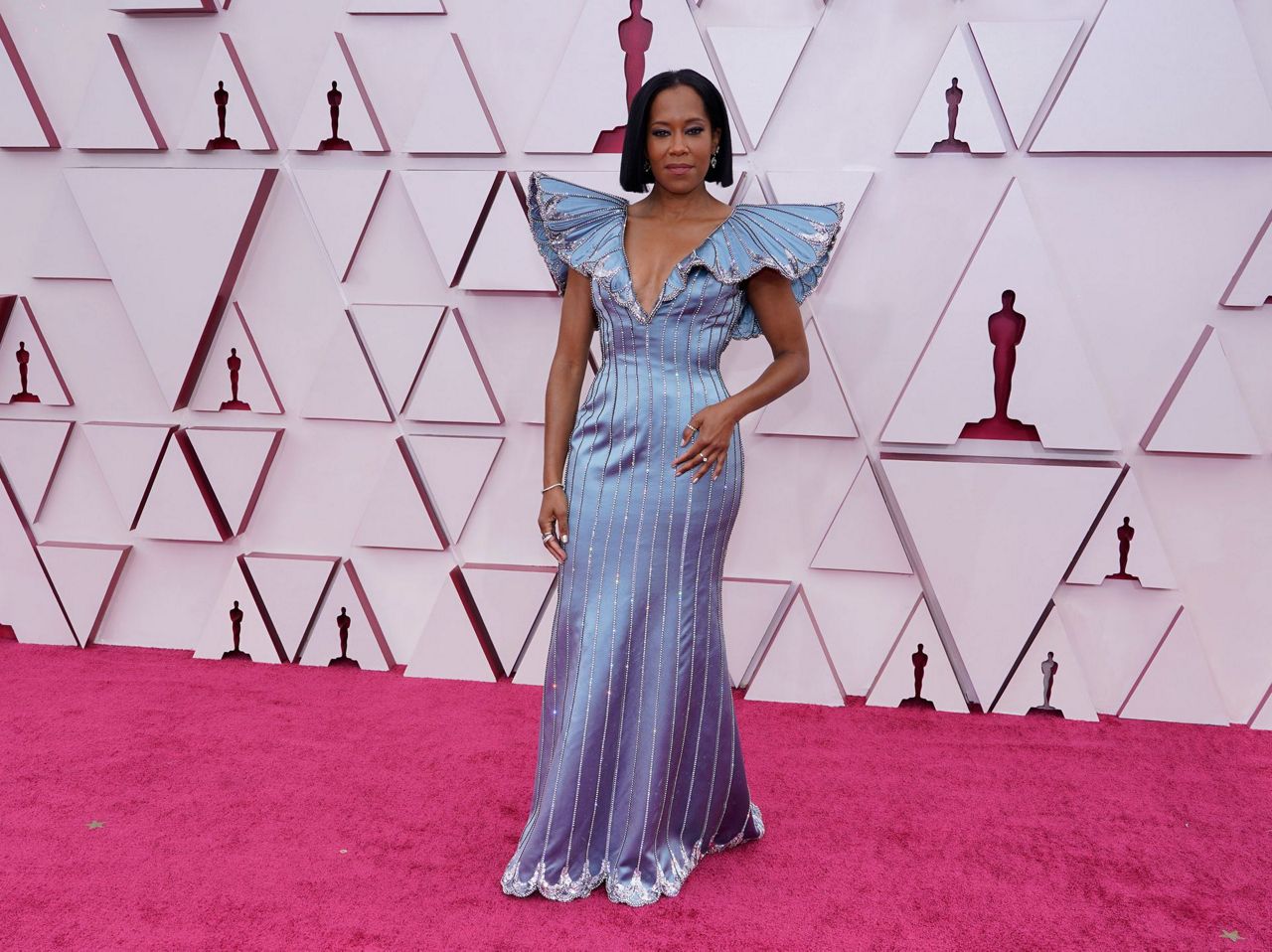 6 of 6
Regina King arrives at the Oscars on Sunday, April 25, 2021, at Union Station in Los Angeles. (AP Photo/Chris Pizzello, Pool)

LOS ANGELES (AP) — The Latest on the Oscars (all times local):

“Fight for You” from “Judas and the Black Messiah” has won the Academy Award for best original song.

The Oscar goes to songwriters Dernst Emile II and Tiara Thomas and H.E.R., who also performed it.

From the stage at Union Station in Los Angeles on Sunday night, H.E.R. thanked her father for playing her funk and soul from the late 60s, when the film about Black Panthers leader Fred Hampton was set.

“All those days of listening to Sly and the Family Stone, and Curtis Mayfield and Marvin Gaye really paid off,” she said.

— The list of winners so far at a different Academy Awards

— Oscar predictions: Can anything beat ‘Nomadland’?

— The Oscars bring back red carpet glam in whites and gold

For complete coverage of this year’s Oscars, visit: https://apnews.com/hub/academy-awards

HERE’S WHAT ELSE IS HAPPENING:

Yuh-Jung Youn has become the first Korean actor to win an Academy Award.

She claimed the Oscar for best supporting actress Sunday night for her performance in “Minari” as a grandmother who moves from South Korea to live with her daughter’s farming family in Arkansas.

It was the first Oscar nomination in a career that spans five decades for the 73-year-old Youn, long a star in South Korea.

She seemed starstruck herself by Brad Pitt, who presented the award.

She said many throughout the world have badly botched the pronunciation of her name, but “tonight you are all forgiven.”

Last year the South Korean film “Parasite” won best picture and best director, but none of its actors were nominated for Oscars.

Youn beat out fellow nominees Olivia Colman, Amanda Seyfried and Maria Bakalova and Glenn Close, who has now been nominated for eight Oscars without a win.

“My Octopus Teacher,” the tale of an eight-limbed creature and her human companion, has won the Oscar for best documentary.

Ten years in the making, “My Octopus Teacher” began as a personal video project by South African filmmaker Craig Foster to rekindle his connection with nature by observing an inquisitive female mollusk while free-diving near Cape Town.

Foster said his relationship with the octopus taught him about life’s fragility and our connection with nature, and even helped him become a better father.

For the Oscar, “My Octopus Teacher” beat out “Collective,” “Crip Camp,” “The Mole Agent” and “Time.”

“Soul” has won the heart of Oscar voters.

Directed by Pete Docter and featuring the voices of Jamie Foxx and Tina Fey, “Soul” follows a middle-school band teacher who dreams of being a jazz musician and tries to escape the afterlife to do it.

“This film started as a love letter to jazz, but we had no idea how much jazz would teach us about life,” Doctor said as he accepted the Oscar.

Pixar has now won the award 11 times in the 20 years since the category was established.

Chloé Zhao has made history at the Academy Awards.

Zhao won the Oscar for best director for “Nomadland,” becoming just the second woman and the first woman of color to win the award.

“My entire ‘Nomadland’ company, what a crazy, once-in-a-lifetime journey we’ve all been on together,” Zhao said.

Kathryn Bigelow was the first woman to win, for “The Hurt Locker,” in 2009.

This was the only year in Oscar history with two female nominees, Zhao and “Promising Young Woman” director Emerald Fennell. Only seven women have ever been nominated.

It was the first Oscar for the 39-year-old Zhao, who was born in Beijing and went to college and film school in the United States. “Nomadland” is her third feature.

The other nominees were Lee Isaac Chung for “Minari,” Thomas Vinterberg for “Another Round,” and David Fincher for “Mank.”

It may not be long before Zhao gets her second Oscar. “Nomadland” is considered the favorite for best picture, and she’s nominated as a producer.

Kaluuya won his first Academy Award on Sunday night for playing one of the two title roles in “Judas and the Black Messiah.”

“I’d like to thank my mom,” Kaluuya said, as his mother teared up while watching. “You gave me everything. You gave me your factory settings. So I could stand at my fullest height.”

Kaluuya played Chicago Blank Panther leader Fred Hampton, who was killed in an FBI raid in 1969.

In an odd quirk of the nominating process, LaKeith Stanfield, who played the “Judas” of the title, an FBI informant who got close to Hampton, was also nominated for best supporting actor.

It was Kaluuya’s second nomination. The first came for his breakout role in “Get Out” in 2018.

The other nominees were Paul Raci, Leslie Odom Jr. and Sacha Baron Cohen.

Raise a glass for “Another Round.”

The film from Denmark, directed by Thomas Vinterberg, has won the Oscar for best international feature film.

“This is beyond anything I could ever imagine,” Vinterberg said from the stage at Union Station in Los Angeles on Sunday night. “Except this is something I’ve always imagined.”

It is the fourth time a film from Denmark has won in the category. The last was “In a Better World” in 2010.

“Another Round” stars Mads Mikkelson as one of a group of school teachers who try to stay slightly drunk all day to break out of their midlife malaise.

Vinterberg teared up when he told the audience his daughter died four days into shooting. “An accident on the highway took my daughter away,” he said. “We ended up making this movie for her, as her monument. So, Ida, this is a miracle that just happened.”

The first Oscar of the night has gone to Emerald Fennell, writer and director of “Promising Young Woman.”

Fennell won best original screenplay at the ceremony Sunday night at Union Station in downtown Los Angeles. The award isn’t normally handed out until mid-show, but this year has already broken with several traditions in the opening minutes.

It’s the first Oscar for Fennell, a 35-year-old British actor and screenwriter.

She worried from the stage that she was going to be in trouble.

Fennell fretted after taking the Oscar statue that she would be in trouble with the show’s producers, who are trying to make this year’s ceremony less like a TV show and more like a film.

“They said write a speech, and I didn’t because I didn’t think this was ever going to happen,” she said.

She is also nominated for best director for the #MeToo-themed revenge tale.

The night’s second Oscar, for best adapted screenplay, went to Christopher Hampton and Florian Zeller for “The Father.”

The two co-wrote the script based on Zeller’s 2012 play.

The Academy Awards have begun in true cinematic fashion.

This year’s unusual ceremony opened with actor and director Regina King grabbing an Oscar statuette outside Union Station in downtown Los Angeles and walking it inside while credits rolled, giving the show’s presenters, including Angela Basset and Harrison Ford, and nominees including Viola Davis and Riz Ahmed, as the show’s stars.

Inside Union Station in front of a small crowd, King then opened the show with a monologue, telling the nominees in front of her to “think of this as a movie set.”

“People have been vaxxed, tested, re-tested and socially distanced,” she said, informing everyone to take their face masks off while the cameras rolled, and to put them on during breaks.

Producers and directors promised that this year’s ceremony would be closer to a movie then a television show.

Performances of the Oscar nominees for best original song have begun from locations as varied as Los Angeles and Iceland, even if the ceremony hasn’t.

In one of many twists in this year’s ceremony, the five songs are being presented in a pre-show before the main event begins at Union Station in Los Angeles at 5 p.m. Sunday.

Laura Pausini performed a pre-taped “Io Si (Seen)” from “The Life Ahead” high above Los Angeles on the roof of the new Academy Museum of Motion Pictures that opens in September. She was joined by writer and 12-time nominee Diane Warren playing a red grand piano, and an orchestra decked out in red.

Swedish singer Molly Sandén performed “Húsavík” from “Eurovision Song Contest: The Story of Fire Saga” on a cold boat dock in Iceland, joined by a sweater-sporting children’s choir from the town the song is named for, which has adopted the song as a de facto anthem.

There are also will be performances of “Fight for You” from “Judas and the Black Messiah,” “Speak Now” from “One Night in Miami” and “Hear My Voice” from “The Trial of the Chicago 7.”

Leslie Odom Jr. has arrived at the Academy Awards decked out in gold from head to toe. He has two chances Sunday night to get a matching Oscar.

Wearing the sparkling double-breasted suit with a matching gold shirt underneath, Odom walked the scaled-back red carpet outside Union Station in Los Angeles with his wife, actor Nicollette Robinson, who was in a simple black dress.

Odom told KABC-TV from the carpet that it feels great to be “walking in healthy, walking in at all.”

Odom, nominated for best supporting actor and best original song for “One Night in Miami,” can get one or two Oscar statuettes to go with the Tony and Grammy he won for playing Aaron Burr in the original Broadway cast of “Hamilton.”

He praised this year’s diverse nominees, including his own film, “Ma Rainey’s Black Bottom” and “Judas and the Black Messiah,” calling it a “special moment” for films about black lives.

The preparations are done and the arrivals have begun for a most unusual Oscars.

Paul Raci, up for best supporting actor Sunday, and Diane Warren, up for best original song, were among the early arriving nominees.

Raci, a 73-year-old first-time nominee for “Sound of Metal,” and Warren, a 12-time nominee who has never won, walked a red carpet that was heavily scaled back for the pandemic outside Union Station in downtown Los Angeles, where the ceremony is being held for the first time.

“Mank” has the most nominations and “Nomadland” is the favorite in several top categories at the 93rd Academy Awards starting at 5 p.m. PT/8 p.m. ET.

Show producers are hoping to return some of the traditional glamour to the Oscars, even in a pandemic year.

The red carpet is back, though not the throngs; only a handful of media outlets will be allowed on site. Casual wear is a no-no.

Pulling the musical interludes (though not the in memoriam segment) from the three-hour broadcast — and drastically cutting down the time it will take winners to reach the podium — will free up a lot of time in the ceremony. And producers, led by filmmaker Steven Soderbergh, are promising a reinvented telecast.

The Oscars will look more like a movie, Soderbergh has said. The show will appear more widescreen and the presenters — including Brad Pitt, Halle Berry, Reese Witherspoon, Harrison Ford, Rita Moreno and Zendaya — are considered “cast members.” The telecast’s first 90 seconds, Soderbergh has claimed, will “announce our intention immediately.”