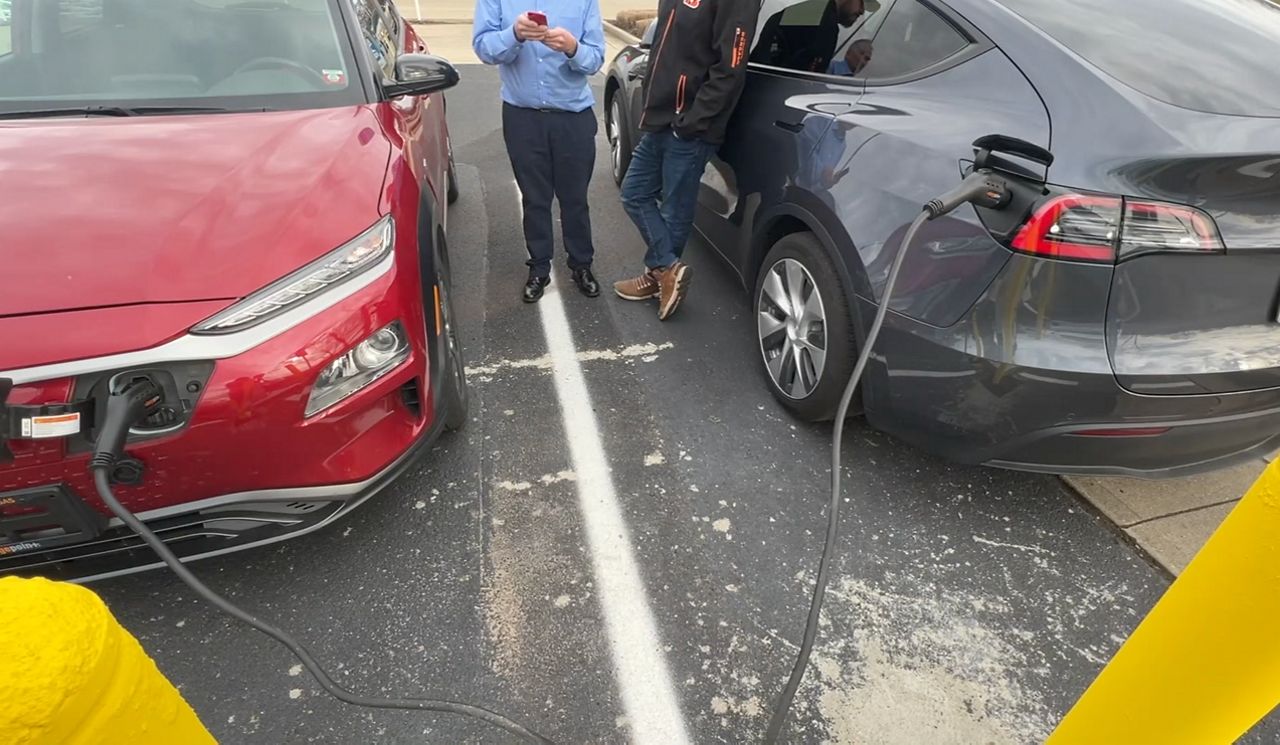 What the infrastructure law means for electric vehicles in Ohio

It’s one of two now installed in that part of the Miami Valley and gives EV drivers like Kevin Cochran some more accessibility.


Cochran’s all-electric Hyundai Kona has been his primary car for more than two years.

“I’ve gone ahead and made a little access door here in my house,” he said as he pulled a charging cord out of the side of his house in the Dayton area.

He mostly charges it overnight at his home to take full advantage of his 300-mile range, but it does take hours to reach fully charged.

Public charging stations, like the ones opened in Fairborn, are more powerful and a lot faster. Cochran said they help to ease a fear many electric vehicle owners have.

“What they call ‘range anxiety,’” Cochran said. “Which is like, ‘I don’t know if I want to get an electric car because I might get someplace where there’s no way to charge it.’”

When President Joe Biden signed the bipartisan infrastructure bill into law in November, it unlocked more than $5 billion to build EV charging stations.

Ohio is expected to get $140 million from that pot, according to Rep. Marcy Kaptur (D, OH-9), a senior member of the House Appropriations Committee.

Ohlander ranks Ohio as the 17th best state to own an electric car in.

She said there are 14,000 electric vehicles on the road in Ohio right now, but only 778 charging stations.

While more are being built each year, the lack of accessibility could keep drivers from going electric.

Ohio Democrats in Congress hope the new spending from the infrastructure bill will help transform Ohio into a hub for electric vehicle drivers and manufacturers.

“We have the best chance, perhaps of any state, to capitalize on electric vehicles,” Sen. Sherrod Brown (D-Ohio) told Spectrum News.

Brown hopes Ohio’s history of car and steel plants, combined with its central location, will prompt electric vehicle companies to set up shop in the state.

He’s cautiously optimistic about the recent deal between Lordstown Motors, the struggling electric truck company, and Foxconn, an electronics manufacturer based in Taiwan.

Foxconn is buying the old General Motors plant in Lordstown from Lordstown Motors. The two companies are also working on an agreement for Foxconn to build the electric Endurance pickup truck that Lordstown Motors designed.

But a big deal Foxconn made in Wisconsin a few years ago ended up shrinking dramatically after the announcement, so Brown said he’ll be watching the company closely.

Congressman Tim Ryan (D, OH-13), a Democrat who represents Lordstown, feels much more confident about this new deal because Foxconn has new leadership and isn’t asking Ohio for big incentives.

“Now they’re coming to Lordstown. They’re not asking for a nickel. They want to be involved in the electric vehicle market and make Lordstown their North American hub. This is a hell of an opportunity,” Ryan told Spectrum News.

Congressman Bill Johnson (R, OH-6), a Republican who likely will represent Lordstown when the new congressional maps go into effect next year, said Foxconn has made a good decision to invest in the Mahoning Valley.

But Johnson, a big supporter of the fossil fuel industry, doesn’t think Washington should play a leading role in making Ohio an electric vehicle hub.

Back in the Miami Valley, Kevin Cochran is excited to see how the infrastructure bill helps expand access to charging stations.

He’s a member of Drive Electric Dayton, a group of EV enthusiasts, and thinks more stations outside of Ohio’s major cities will help reduce range anxiety.

But he did say charging a vehicle at home has an upside, too.

“Every day I’m home, I can leave the house with a full tank of gas,” Cochran said with a laugh.