Pencil pushers: The Schmitz making their mark with their museum of writing instruments

WINNECONNE, Wis. — Tom and Karyn Schmitz have been writing their own unique story for years.

And whenever a pen runs out of ink or the tip of a pencil is broken, they just look around their lake home and decide which of the 80,000 writing utensils that surrounds them they’d like to use next. 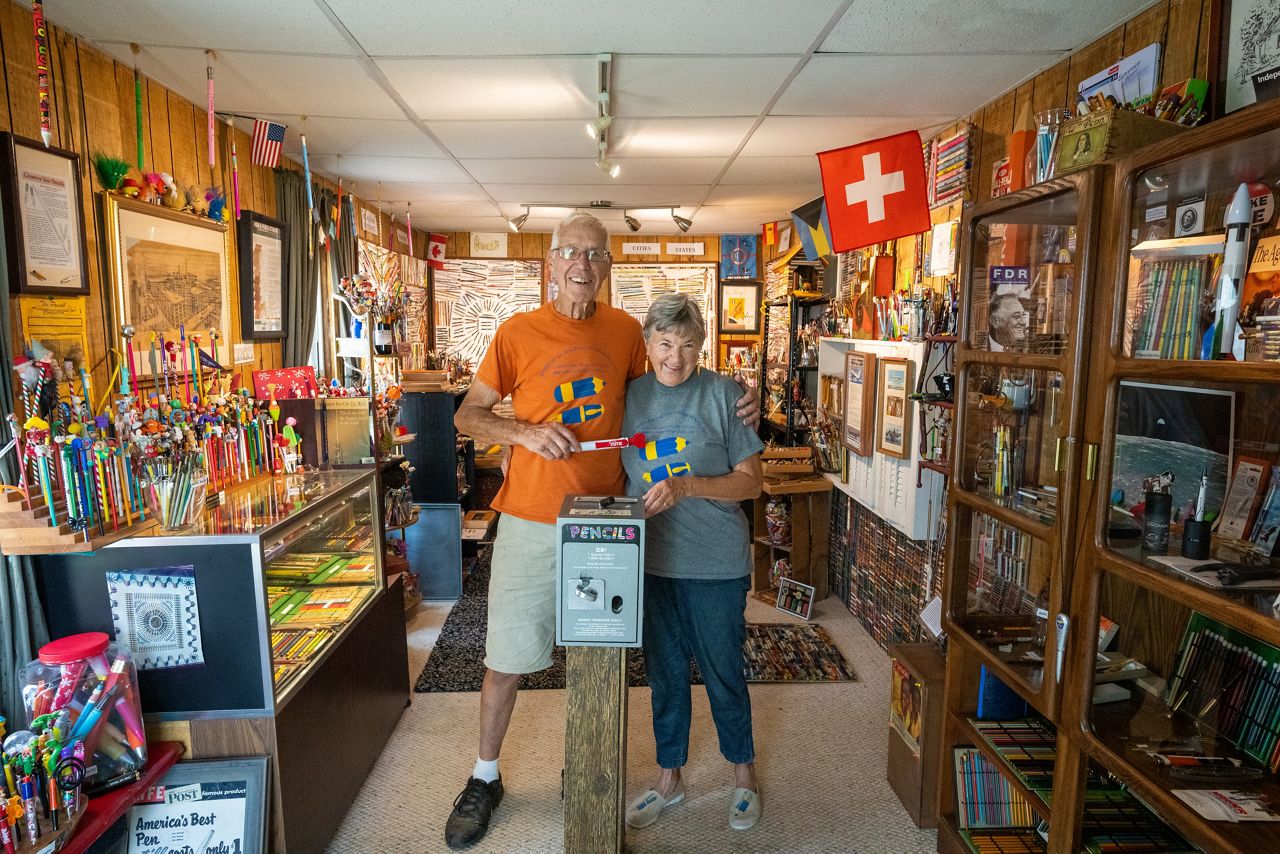 The Schmitz operate the Museum of Writing Instruments, the only one of its kind on this side of the Atlantic. Like many events in their life, this was an opportunity that simply presented itself and, well, the writing was on the wall.

“We’ve always been open to what was coming tomorrow,’’ said Tom. 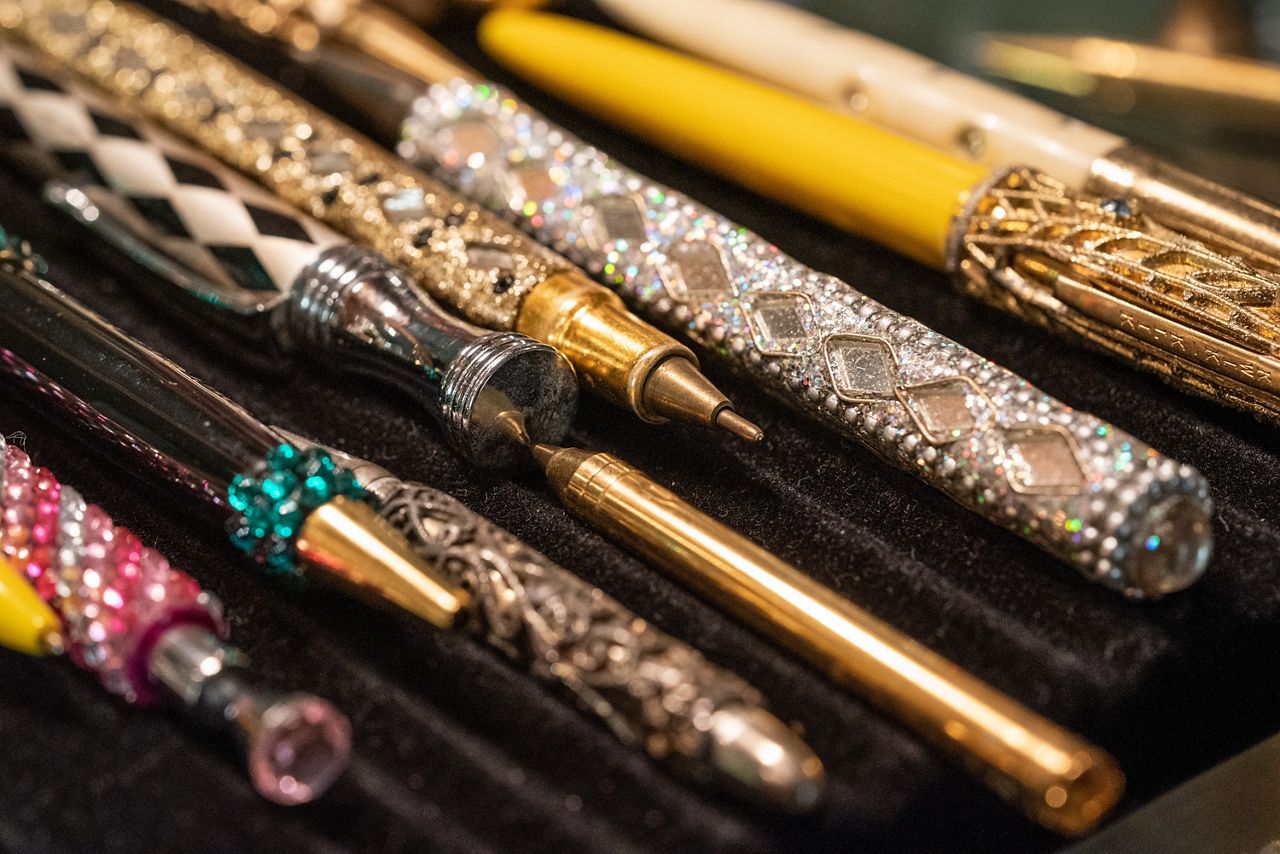 This started off as just a hobby for Karyn, whose great aunt used to collect pencils while traveling in the early 20th century. She kept up the tradition, and soon had a collection of around 3,000 pencils.

But everything changed when her granddaughter, Andrea, and her classmates were in search of a senior class project in high school. They were tasked with the curation of a historical exhibit, and Andrea immediately thought of Karyn’s collection. “Our Wisconsin” magazine got wind of what was happening and wrote a story, and then …

“It was like Christmas every day,’’ said Karyn. “We had all these boxes shipped; grandpa’s wonderful collections.”

Before they knew it, Tom and Karyn had some 80,000 pens, pencils, quills — pretty much whatever one’s imagination could come up with.

And that’s when they decided to convert their home on Lake Winneconne into the MOWI.

“Three years ago we had three dormers up there, took those off and put one big dormer across and  we’ve got a little loft, a tiny home up there,’’ said Tom. “It’s perfect for the two of us.”

Walk around the museum from room to room and you will be amazed at what you’ll find.

Walk around the museum from room to room and you will be amazed at what you’ll find.

Here, Tom shows us just one of his favorites. pic.twitter.com/wvonGAil4G

The bullet pencil, for instance, came about because of an industrious soldier in the early 19th century. The soldiers were all issued pencils, but the tips continually breaking on the battlefield became a problem. So a soldier took the casings from a spent rifle cartridge, dropped the pencil in one end and covered the tip with the other half. Viola, problem solved.

There is an array of left-handed pencils (you can think on that one), pencils made from recycled money and newspapers, pencils that show you where to properly put your fingers to teach cursive, pencils designed to dial rotary phones (the kids are completely lost with those, Karyn says), early pencils from Europe sans erasers (because Europeans said they didn’t make mistakes … Ha!), pencils without metal ferrules because, during the war years, every available piece of metal was dedicated to the war efforts, and a soapstone pencil from 1883, which is the oldest one they have. 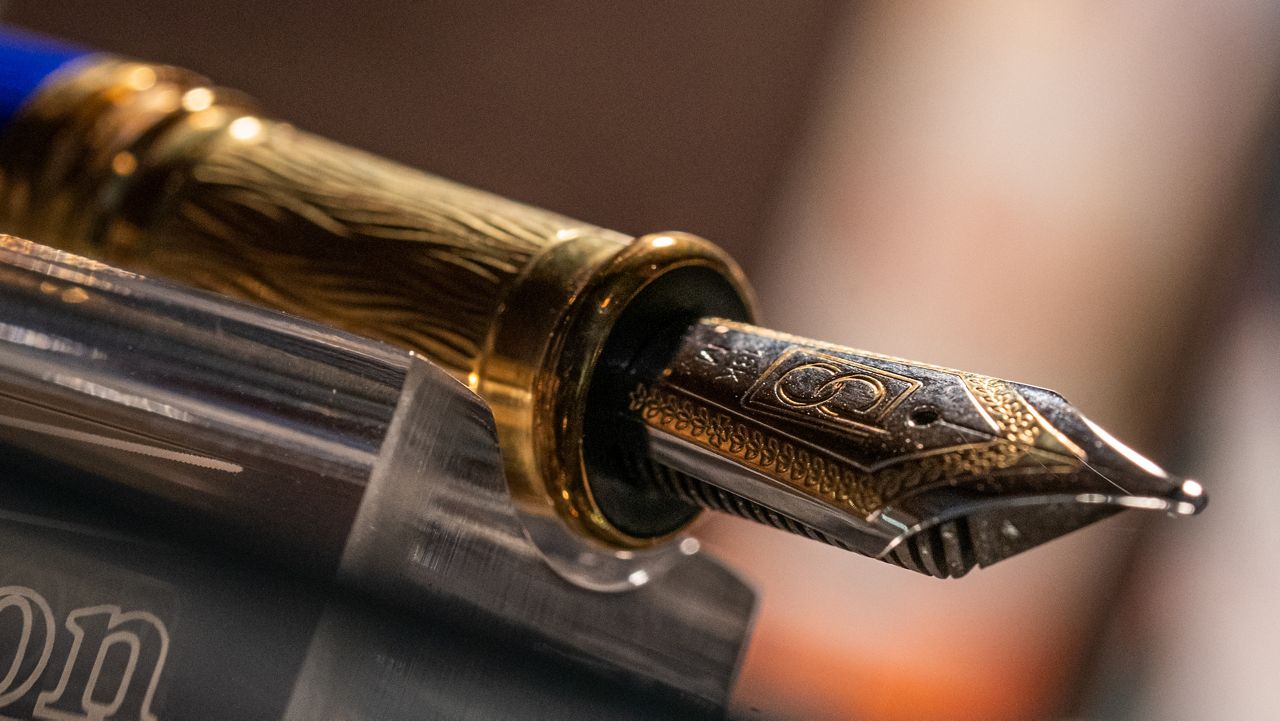 There are pens that double as bottle openers, tie bars, pens designed to write in space, a pen that contains moon dust from the Apollo 11 moon landing, ones that contain FM radios, ones that detect Wi-Fi, designer pens (we’re talking up to $5,900 for a single pen, here), pens that double as lighters, flashlights and pens from former Presidents Lyndon Johnson and Barack Obama that were used in bill signings.

“The thing about it, I like history, so this is kind of addictive,’’ said Tom. “Just pick up a pencil, any pencil (and he does just that). I don’t think I’ve ever read this one. It’s made from genuine myrtle wood. So somewhere there’s a craftsman turned on by wood and he loves to play with different woods.

“So that’s what happens to me. Every time I come in here, there’s something I haven’t examined, haven’t seen. I just love to come in here because I can wander around, spend a couple of minutes, or an hour, looking at things that I haven’t seen before. After this long of time, I know everything, but I don’t. There’s just so much to see and so much to learn. And we are blessed with meeting new people all the time.’’ 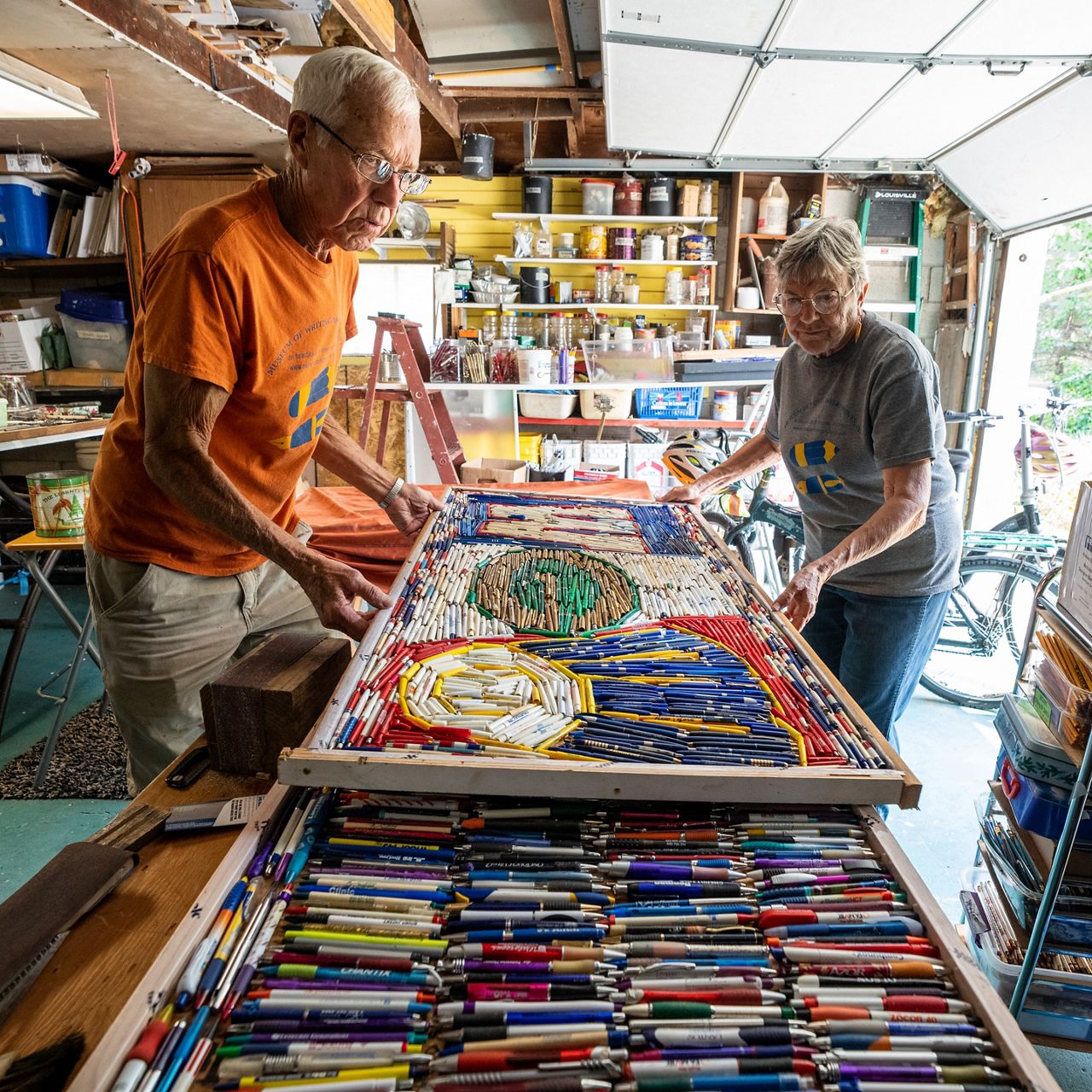 “I went to UWO for a semester and spent the next semester working, then went back another semester,’’ said Tom. “I couldn’t get directed. Then, I went out in the labor force.”

Tom worked in local theater, radio, television, sold cars and so on. He also studied Russian while in the Air Force.

“We got married in ’89,’’ said Tom. “It was sometime before, during, after graduation. We packed up our bicycles and boxes and flew to Europe and spent three months on our honeymoon riding our bikes. So that’s kind of our thing. And it’s been like that ever since.”

When they returned, they bought a building in Green Lake from “a guy who got stiffed by his brother,’’ according to Tom.

“We got it at a fire sale,’’ he said. “It just so happened during negotiations, Karyn said, ‘Hey, you’re a picture framer. You teach Tom how to frame, that’s part of the deal.’’’

And so, for the next 15 years, the Schmitz ran a jewelry, art and — yes — picture-framing business.

Those framing skills have paid off handsomely for the MOWI, for when you walk around the museum you’ll find various displays in cases, framed on the walls and even encased in flooring tiles with the help of students from Winneconne High School.

Kiersten Prahl, a 17-year-old junior, helped create four floor tiles, coming up with the designs and then cutting up pens and pencils to fit the sizes needed. And, no, it’s not very easy.

“You can overcome anything if you persist,’’ Prahl said.

She would like to be a software engineer in the future, but was drawn to this project because of her love for art and creativity.

“I think that this project has helped me to be able to plan and organize tasks effectively,’’ she said. “The most rewarding aspect is being able to see my ideas in my head become a physical object.”

While they certainly have enough pens and pencils, and stories to go with them, to keep a visitor tied up for a long time, they are expecting to receive several new additions — as in 100,000 from a Chicago priest who has been collecting since he was 11. 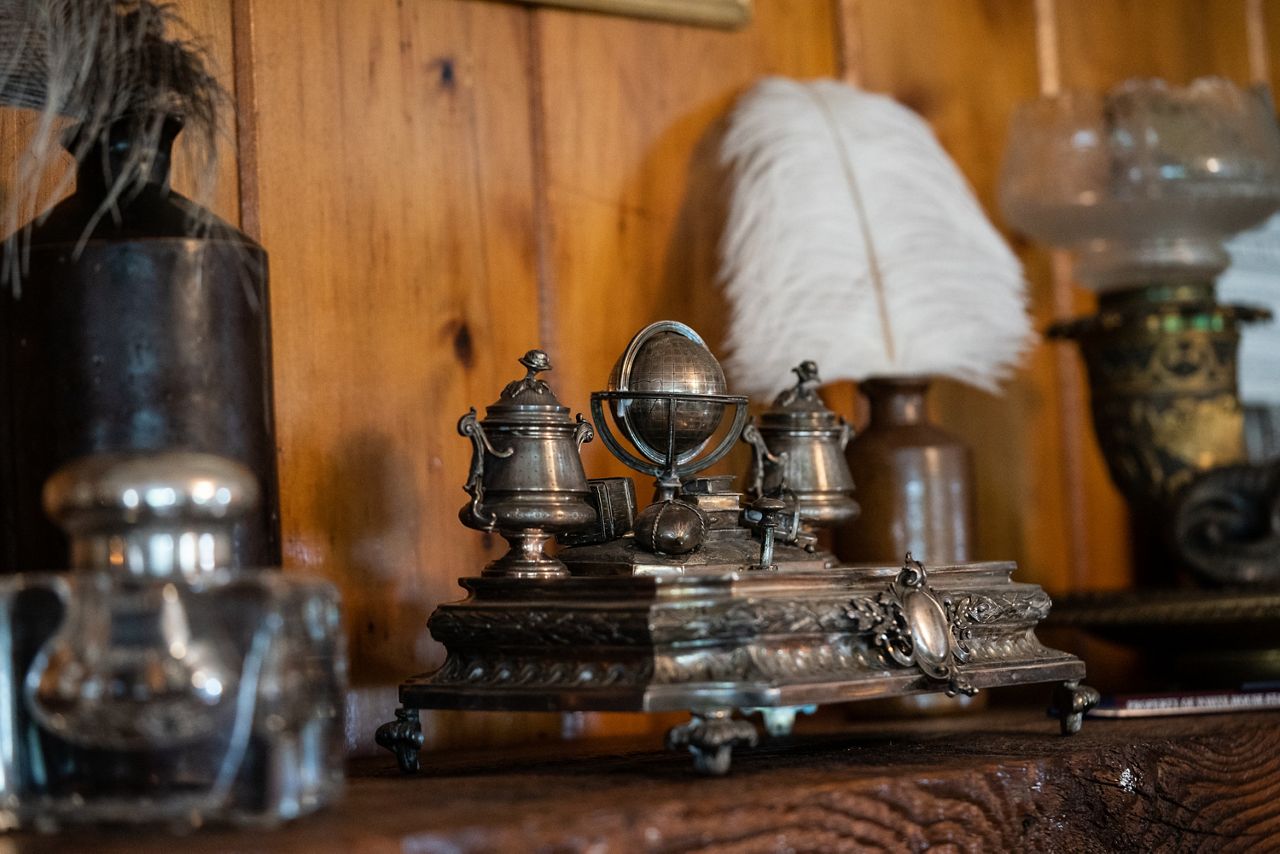 Karyn said the museum sees 500 visitors annually. It’s only open during the summer, as they spend their winter months in Texas volunteering, including doing bird and butterfly tours at national parks.

But if you want a different summer experience, you can make your reservation — it’s by appointment only — by contacting Tom and Karyn at: worldpencilmuseum@gmail.com and they’ll give you a personal tour.