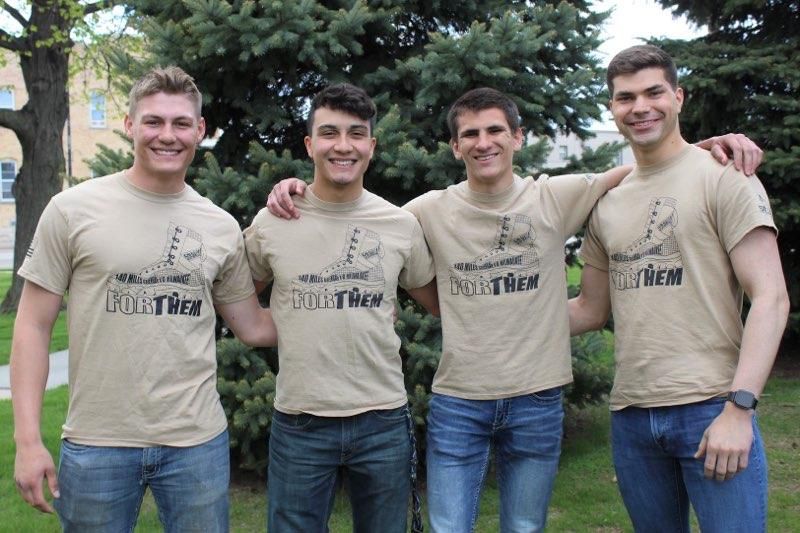 For them: St. Norbert, UW-Green Bay students to walk 140 miles to assist state organization that helps suicide prevention among veterans

DE PERE, Wis. — His back was wondering if its request for R&R had gotten lost, and his legs were about to dial 911. As for his feet, the bearers of all this misery, they were just flat-out begging for mercy.

With every step, blisters that had taken over the soles of Sam Skiff’s feet were now exploding inside his combat boots. Blood began to seep through. 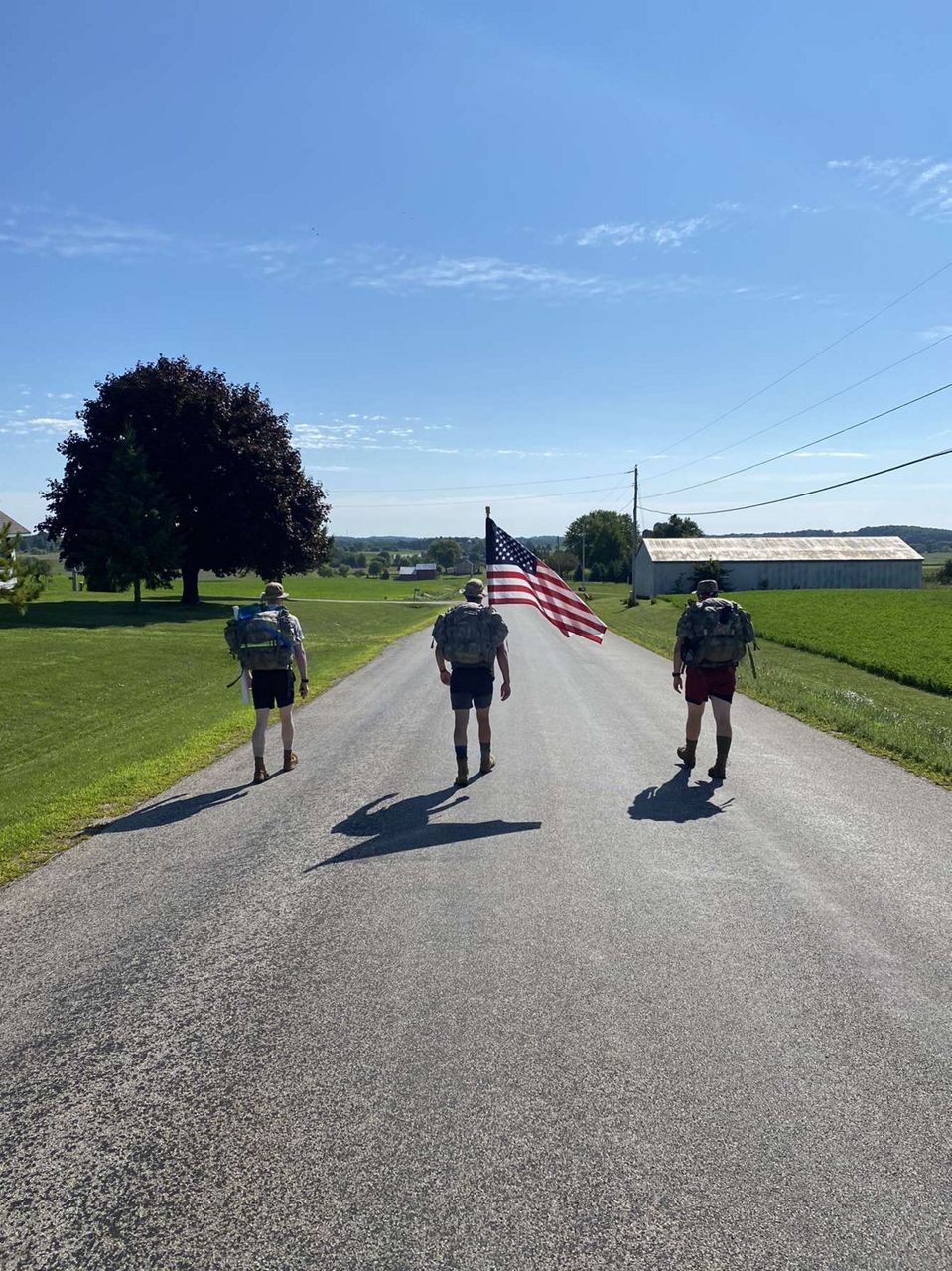 And then a stranger appeared, holding a picture. The photo showed a military veteran, and Skiff was told the person pictured had taken their own life. Stories began to spill from the visitor’s mouth, and as those words washed over Skiff, all his discomfort, and all his pain, began to subside.

“I think you learn a lot when you put others in front of yourself,’’ said Skiff, who is a junior finance and business administration major at St. Norbert College. “And I think there’s a lot to be gained when that happens, not just for yourself, but especially the people you’re doing it for.

“And seeing them, seeing the way you impact others, and how grateful they are and how much it means to other people, that’s really helpful.”

Beginning June 27, Skiff and three of his ROTC brethren will commence the For Them Ruck March, a 140-mile journey from Green Bay to Milwaukee to raise money and awareness for 4th Helping Out Our American Heroes (H.O.O.A.H.) Wisconsin, an all-volunteer organization formed in 2013 designed to help military veterans and their families, specifically in the areas of Post-Traumatic Stress Disorder (PTSD), Traumatic Brain Injury (TBI), and also raise awareness for veteran suicide.

“Last year, a couple of times, there were family members of veterans - who had committed suicide - stopped and gave us pretty generous checks,’’ said Skiff, who is the only one who partook in last year’s march. “And to hear their stories, and seeing how what we’re doing impacts them, is very motivational.”

****
Tammy Hardwick has an open invitation if you ever want to know what it is like to walk in a veteran’s shoes.

Each November, 4th H.O.O.A.H. Wisconsin holds a 20-mile ruck march fundraiser (as well as a 2-mile walk for beginners). The 20 miles represents the number of veterans, according to the Veterans Administration, who commit suicide every day. As part of the march, participants are also asked to carry a 20-pound rucksack. The event’s goal is not only to raise money and awareness, but to honor those veterans who have fallen victim to suicide.

“We always say, with our ruck march, we want you to get to that place mentally, as close as you can to the isolation, the pain, just that physical and mental state that these veterans really come to when they’re in crisis,’’ said Hardwick, chapter president for 4th H.O.O.A.H. Wisconsin. “We want to bring them to the point where you can empathize, and not just sympathize, without truly getting to that point in life. 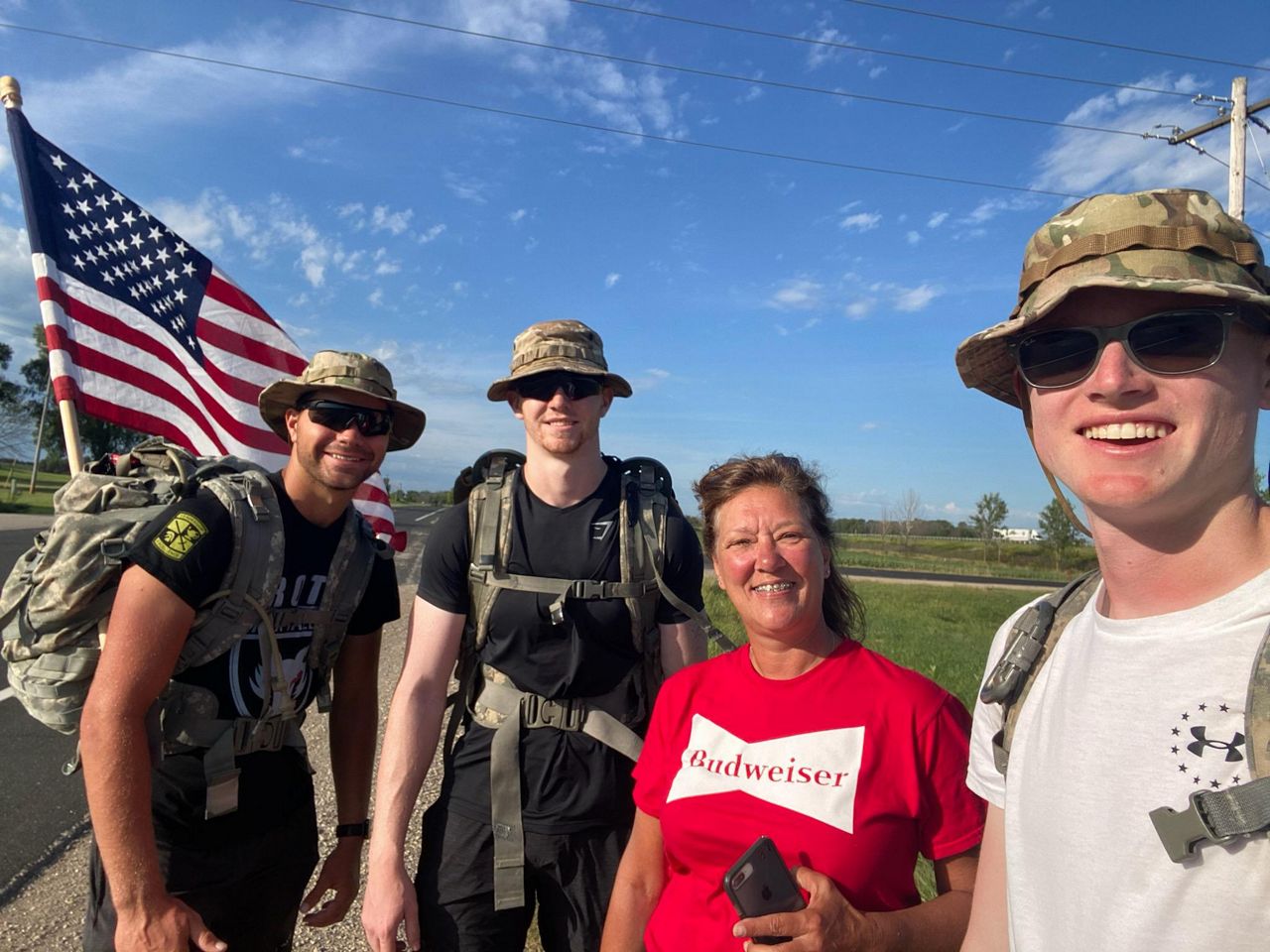 “So this event, and our ruck march event, it really embodies, it really puts you in those people’s shoes. When they get to crisis, their bodies hurt, their heads hurt and they’re mentally exhausted. That’s really where they are and that’s the closest we want to get people to. But to really understand how those people feel at that time of crisis.”

The 4th H.O.O.A.H. Wisconsin uses a modified version of the Warrior Wellness program used at their Florida-based national program when treating veterans.

“So they’ll peak them at high adrenaline with physical activity,’’ said Hardwick. “So they get them where their heart rate and adrenaline and everything is up and then they teach them iRrest — it’s a guided meditation. So that teaches them to calm their minds, to self-sooth when they’re triggered for any of their PTSD. We also do a lot of bonding with animal therapy. Then they go into a yoga session, which teaches them to be self-aware, to be present in your body. With iRest meditation, it also teaches them to breathe. Because when we’re triggered, and when in trauma, the first thing we do is we breathe irregularly. So that really teaches them to focus on themselves, center themselves, control their breathing because, as we know, you need air through everything to function your mind, your heart rate; it just gives them the tools to really desensitize their triggers.’’

In addition, they use accelerated resolution therapy (ART) which, in part because of its success in the national program, led Florida to becoming the first state to cover the alternative therapy under veterans’ benefits.

“It is, as I describe it for lack of a better term, a conscious hypnosis,’’ said Hardwick. “So it takes them through their trauma, so they don’t even have to verbalize to the therapist. Because with traditional therapy, when you do to see a therapist, you have to relive that trauma. You’re verbalizing it, and that brings back all the physical manifestations, and the mental manifestations. With ART, they play that trauma like a movie. They tell them to project it on a movie screen so they’re outside of it, directing the movie, instead of living out the trauma again.”

4th H.O.O.A.H. treasurer Scott Conklin, an Air Force veteran and now a member of the Army National Guard, said the program is still in its infancy when it comes to bringing the Warrior Wellness program throughout Wisconsin. But all signs point to it making an important impact.

“We’ve had veterans, the ones who have gone through the Warrior Wellness program up here, they come back,’’ said Conklin. “They’re not coming back because they need the help, but they’re coming back because they want to be there. They’re definitely more open to talking and, hey, you know, they’re the ones who start reaching out to the other vets and say, ‘Hey, this is where you’re at. Let’s take a look and get you in here because this is stuff that can help you.’

“We’ve had a really good handful that have reached back out and said how we present things, and how we do those programs are super-beneficial to them, getting a healthier lifestyle and getting out of their own heads and becoming more of a community (with other veterans) and understanding that they’re not alone.’’

Sam Skiff admits now that, when first asked to participate in the For Them Ruck March last year, he underestimated the task at hand. Like, by a lot. 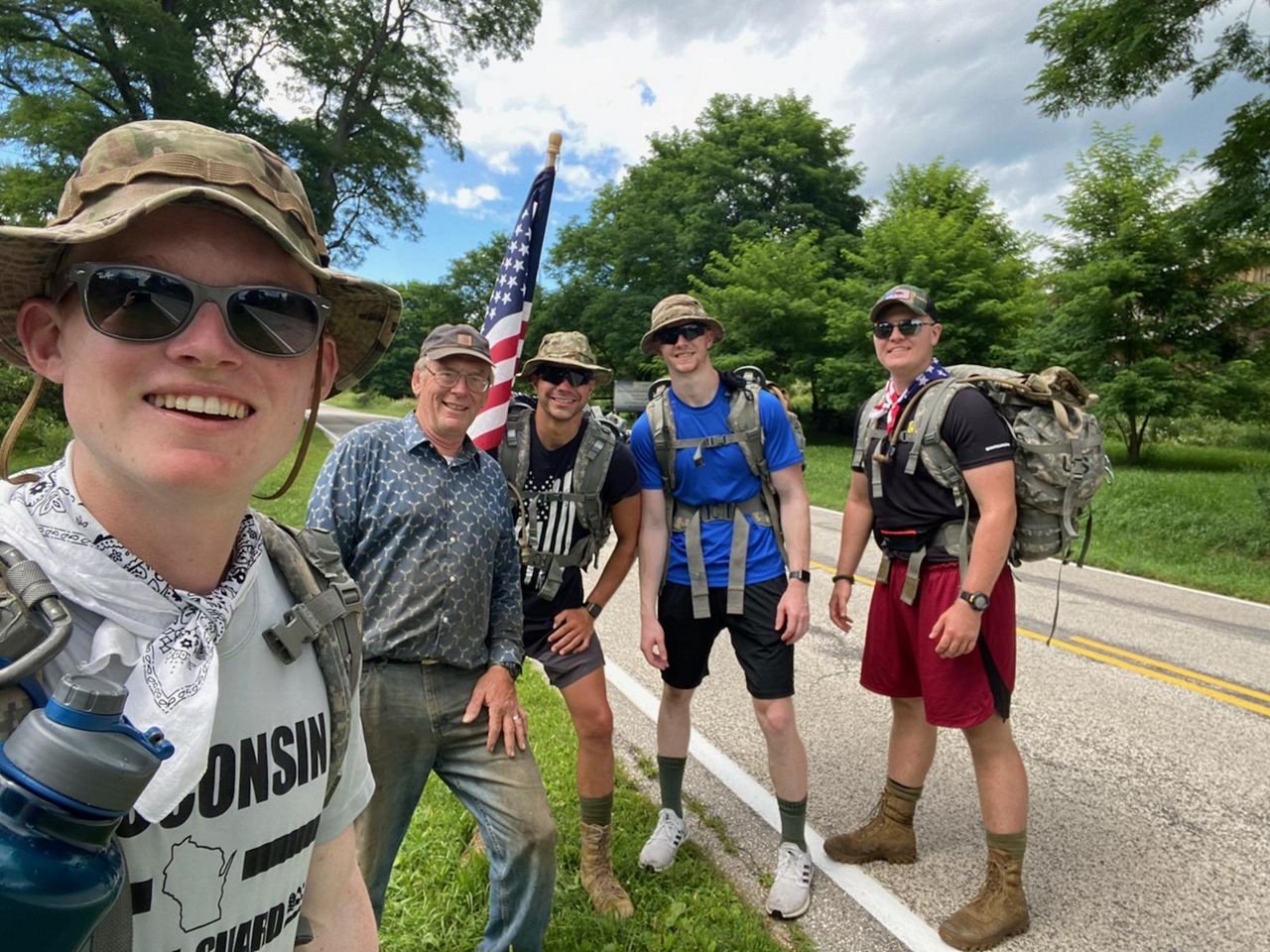 “I didn’t think it was going to be as hard as it was,’’ he said. “But this is the hardest thing I’ve ever done.’’
The team begins at Lambeau Field and then heads east to Luxemburg, and then Kewaunee, and then south on country roads along the Lake Michigan coast. They walk in combat boots, carry roughly a 45-pound rucksack, their 4th H.O.O.A.H. banner and an American flag.

They average 20 miles a day over the seven days, but some days they’ll walk as much as 27 miles over 12 hours to reach their next checkpoint stop. The march concludes at Veterans Park in Milwaukee on July 3.
Last year, two of the four members were forced to drop out because of severe blistering on their feet, with one member nearly losing a pair of toenails.

“You have to prepare mentally,’’ he said. “You have to be ready to be in pain and keep going.’’

Skiff handpicked this years’ team and will be joined by fellow St. Norbert student Andrew Lopez, as well as Alex Kaufman and Nic Hanke from UW-Green Bay. All are part of the ROTC program and Skiff, Kaufman and Hanke are also part of the National Guard.
It’s a huge commitment for a college student, most of whom prefer some personal time when away from school. But Hanke felt it was necessary he join.

“Just because I feel it’s part of my civic duty as a U.S. citizen to join the army, or any branch of the armed forces, just because I feel like it’s what most people should do,’’ said Hanke of deciding to join the National Guard earlier this month. “Because, in history, we’ve been known to protect freedom and so I might as well continue to do that.”

Which also led him to agree to do the ruck march.

“I’ve always had a great respect for veterans and military service members,’’ he said, “so I wanted to do just a little more.”

The physical aspect, in itself, is hard to train for.

“The thing is, it’s not very good for your body,’’ said Skiff. “And so you don’t want to overdo it beforehand. But you can’t underprepare, so it’s all about finding that balance.”

The mental aspect is another story.

“The most challenging part — you reach a certain point where you’re just like, 'OK, this is enough,'’’ said Skiff. “But you’re only 20 miles in.

“But you have to keep in mind why you’re doing it. For us, it’s all about the veterans, the 20 veterans a day that commit suicide, and we’re just … every step is for them. When you think about what each of them have to endure every day, that kinds of puts it into perspective and it’s kinda, ‘I can go that extra mile with my hurting feet.’’’

For Skiff, the march is personal as well. His father was in the Air Force, his brother in the Marines and he knows of three people in his National Guard battalion that took their own life over the past year. 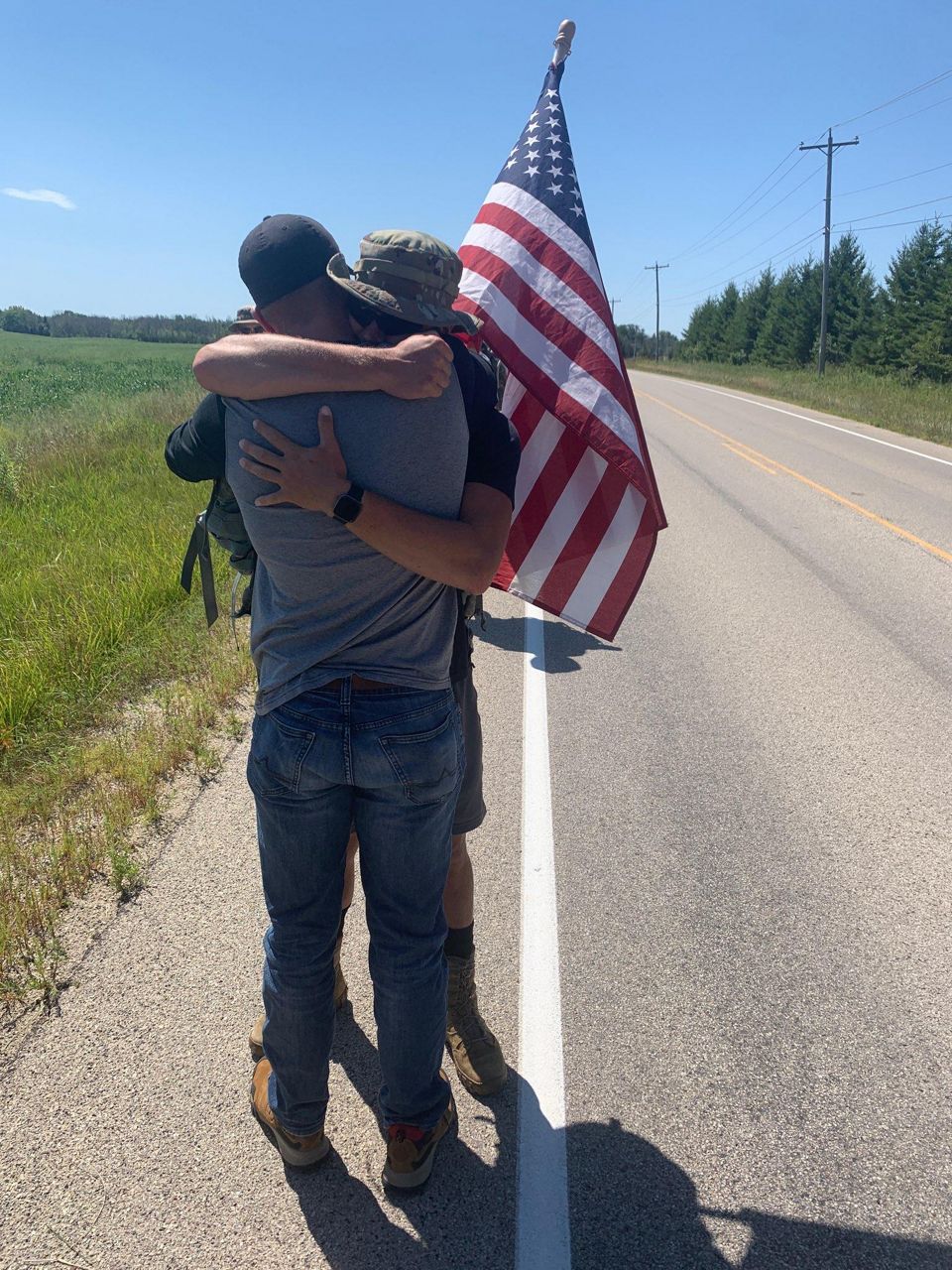 He knows the journey ahead will be difficult, but that’s not what is central in his mind. He prefers to focus on the people he will meet, the ones who will stop and offer encouragement and a Gatorade, the ones who, when they find out what they’re doing and why, will offer a donation, and the veterans who will come to offer their thanks and tell their stories.

“We ran into a guy that said he himself, for a long time, was struggling with suicidal thoughts — he was a veteran who was deployed a number of times — but he found his purpose and started another veterans organization,’’ said Skiff, who said this year’s goal is to raise $20,000. “You take them with you immediately, and just kind of feed off that.’’

Skiff knows that when finished, it will take days to recover. But he is most looking forward to the final leg of the trip, the walk into Veterans Park in Milwaukee, and what it will mean.

“The second you stop, you’re still hurting, but once you reach Veterans Park, once you reach that, it’s a very — it was an emotional experience for me,’’ he said. “Just because for the past seven days, when you’re out there for hours every day just thinking about that one point and why you’re doing it and why you’re walking and what you hope to get from it in terms of that experience and the stories you hear —  it changes you.

“So it was a very humbling moment for myself because I was so — I was kind of inspired to keep going  — not in terms of walking — but in terms of for this upcoming year and for the future of veterans’ mental health and helping out with that.”

So if you see this group of four young men in the near future, the ones with combat boots and rucksacks and an American flag ambling down a country road near the coast of Lake Michigan, stop and say, 'Hi,' offer a snack or a drink, shake their hand and, most importantly, open your wallet.