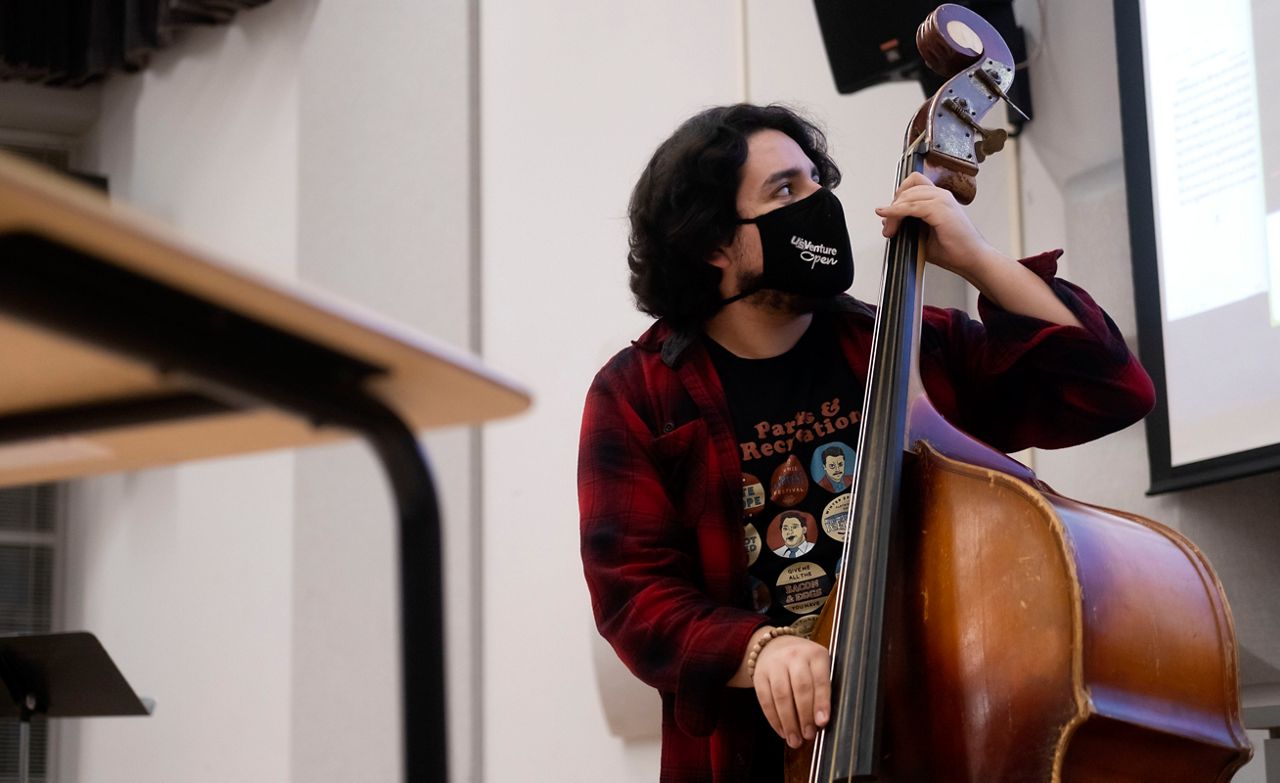 APPLETON, Wis. — There were many mornings when Jando Valdez was just trying to get some shut-eye when his slumber was disrupted by the sounds of mariachi music cascading through his home.

And Valdez would immediately think, “Oy.”

He knew what mariachi music on a Saturday morning meant.

“They’re cleaning now,” Valdez would say about his parents. “Oh, boy, time to get up.” 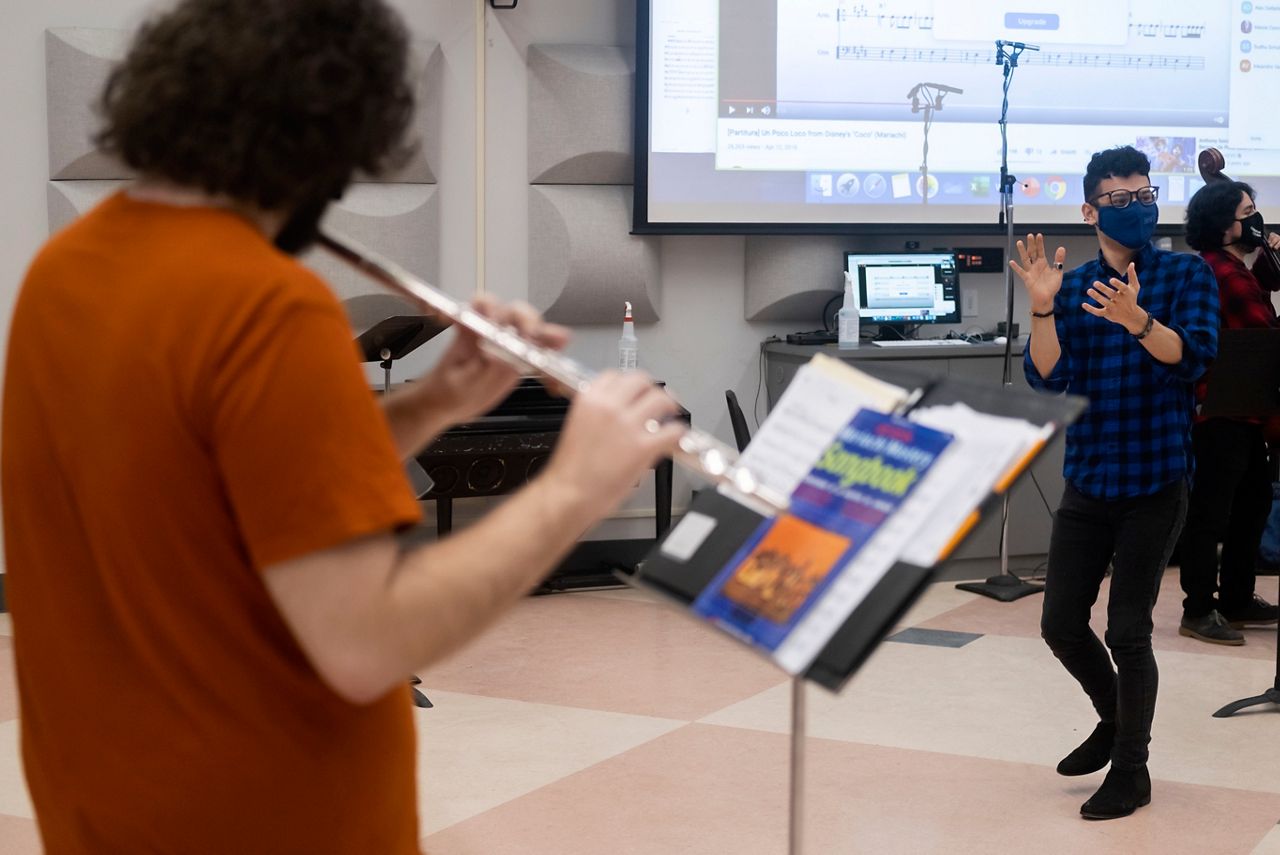 Yes, cleaning was a necessary evil. But, somehow, the sounds of mariachi made it a little less painful.

The music was a constant in the Valdez home, even though his mom was Colombian, his dad Guatemalan and no one in his immediate family was a musician or had a close musical tie to this traditional sound of Mexico.

But like any music you loved as a kid, it stayed with Valdez. It never left his head and, eventually, seeped into his bones.

A mariachi ensemble he formed in high school led to a three-year relationship with Appleton’s popular Mile of Music festival but, just as momentum was building, Valdez set it all aside to pursue a degree in computer science at the University of Minnesota. For he knew making a decent living, and music, were not always compatible.

“It was after about a year when I realized I wasn’t happy,” he said. “I wasn’t fulfilling my purpose, and I was just maybe hoping for a paycheck in the future.

“So I realized I needed to be part of something greater, so I came back home and applied to Lawrence (University).”

Today, Valdez is not only leading a mariachi ensemble at the school that has drawn some 30 students from an array of ethnic backgrounds and academic pursuits, he is on a path to possibly repeat history.

It was in the 1970s when a 19-year-old sophomore named Fred Sturm started a student jazz ensemble at Lawrence, which eventually led to the creation of the jazz studies department. Sturm later returned to Lawrence to lead one of the top undergraduate jazz programs in the country, winners of 29 DownBeat student awards, among the highest honors in jazz education.

“And so when I’m talking to Jando, I tell him that because I want us all to be dreaming,” said Brian Pertl, dean of the Lawrence University Conservatory. “Could the mariachi ensemble be that next student-driven ensemble that becomes something that is so central and beautiful and part of this institution that in 10, 20, 30 years that no one would ever question, ‘Why would you have mariachi?’

“Of course you would, because it’s part of who we are.”

When Valdez began at Appleton North High School he had this germ of an idea and thought, “Why not?”

So he approached the Latinx Club and basically asked, “Hey, anybody want to join me in starting a mariachi ensemble?”

The club’s adviser, Hilary Haskell, was a Lawrence graduate and knew the education team there was interested in mariachi. Soon she texted Valdez and asked if his group would be interested in working with a team of music educators through Mile of Music.

The university brought in Nestor Dominguez, a Lawrence alumni, who worked with Valdez’s group, Mariachi Jabali, and for three years they were part of the Mile of Music festival, teaching mariachi to parents, kids, teenagers — anyone who would walk by and was willing to learn.

“It was so much fun,” said Valdez. “It was probably one of my most rewarding experiences as a musician ever. It kind of sparked my interest as an educator, as well, because I feel education is so important and it’s not given the credit that it really deserves. So it was such a rewarding experience.”

But when he arrived at the University of Minnesota, the battle within began to rage. Follow his heart and return to music, or follow his head and remain on a financially secure track.

“I still thought that if I was going to go into music, I was really going to have a tough time financially, so I never thought about it,” he said. “But when I came back I had my eyes open to the fact that I was made for something greater.”

It would only make sense that a key component of mariachi becoming an important part of Lawrence’s music genre would take place in Mishawaka, Ind.

That’s where Lawrence assistant professor of music Matthew Arau was teaching student leadership and rehearsal techniques at a seminar. There he met a pair of music teachers who were mariachi musicians, who was from the San Diego area, where Arau was going for another seminar. They asked him if he would give the keynote address at the International Mariachi Summit scheduled for San Diego.

“The more I learned about mariachi and how you teach mariachi, oh my gosh, the way you teach mariachi and the way the students get to learn mariachi is the way I think we should learn music in general,” Arau said. “When you learn mariachi, you just don’t learn the piece of music, you learn the culture behind it, the meaning, everybody learns the lyrics, everybody sings, everybody plays. There’s choreography, there’s dance involved; just this really holistic approach to education.”

When he got back on campus Arau met with two students, Alex Medina and Willy Quijano, where discussions began about starting a mariachi ensemble.

But then COVID-19 paid a visit.

“It really got put on the back burner,” said Arau.

Little did anyone know there was about to be this effervescent first-year student on campus who had his own dream and was about to take this idea to double time.

After first establishing his academic foothold, Valdez emailed Arau last December, followed by a post on Facebook gauging campus interest, and he received many positive responses. That led to the group’s first meeting on Zoom, and two weeks later, they gathered in the Conservatory.

With the help of connections Arau made at his seminars and the Mariachi Summit, LUME is using the Mariachi Method Book to help teach the music and has had Fredd Sanchez and his Mariachi Continental De San Diego group give lessons and instruction to LUME via Zoom.

“To have him (Valdez) come to Lawrence and really super-charge all of this is another kind of beautiful thing to watch,” said Pertl.

“He’s remarkable. Before every rehearsal he’s sending out rehearsal sheets, what they are going to work on if someone is going to come in to talk (about) who it’s going to be and what they’re going to cover; it’s sort of professional-level preparations for rehearsal. It’s really stunning to see.”

Marya Wydra has been a musician for nearly her entire life, but when she came to Lawrence to pursue a degree in biochemistry.

And while she loves science, it’s not a 24/7 kind of relationship. 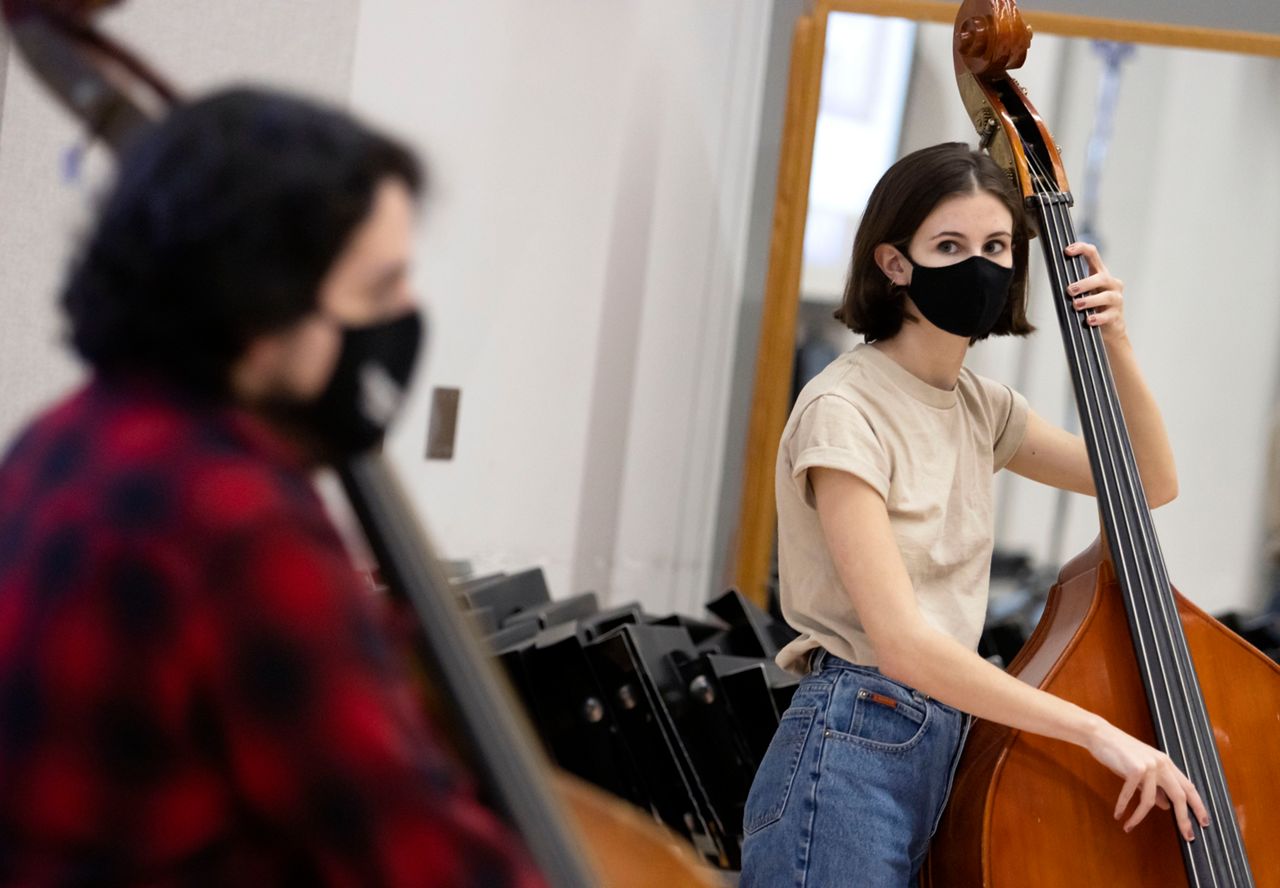 So when she heard about a new mariachi ensemble she jumped at the chance, even though free time was already a precious commodity.

“It’s one more thing to go into a busy schedule, which is tough,” Wydra said. “But at the end of the day, I can’t be doing science all day; I wouldn’t enjoy it at that point and in my free time I would be playing music anyway, so it was kind of, why not do it with a group?

“I consider myself a beginner and I was a little hesitant to be in a group with all these incredible Lawrence musicians who have a lot more experience than me, but I kind of quickly realized that everyone in the group is learning from each other and that’s a really cool environment to be in and I really enjoyed it.”

Wydra is just one of many who were not part of the Conservatory, had no experience playing mariachi music, and had limited knowledge of its history who nonetheless took a leap of faith.

“Music has always been a great way for me to sort of release and, you know, let loose and enjoy myself and express myself,” she said. “Having a group like that really fosters a good environment to do that.”

Valdez admits the response he has received, and the array of ethnic and academic backgrounds that have joined the ensemble was something he never saw coming.

“I was assuming it was going to be, maybe, like eight people who wanted to join maybe wanted to try it,” he said. “It would be a club at first, possibly, and it would take a couple of years to get off the ground. But this is way beyond what I would have imagined.”

The first concert is already in the books and, when you consider this group has only been together for a couple of months, practicing just a half-hour twice a week, with many of the musicians previously unfamiliar with playing that style of music, it was just another remarkable step in their journey.

“The only large ensemble live performance of this entire year is LUME,” said Arau. “And that alone is remarkable and says a lot to Jando’s vision. He’s like, ‘We’re going to have a concert!’… It’s like his sheer will. The spirit of Jando made it happen, but his spirit is contagious. Everybody is excited about it.” 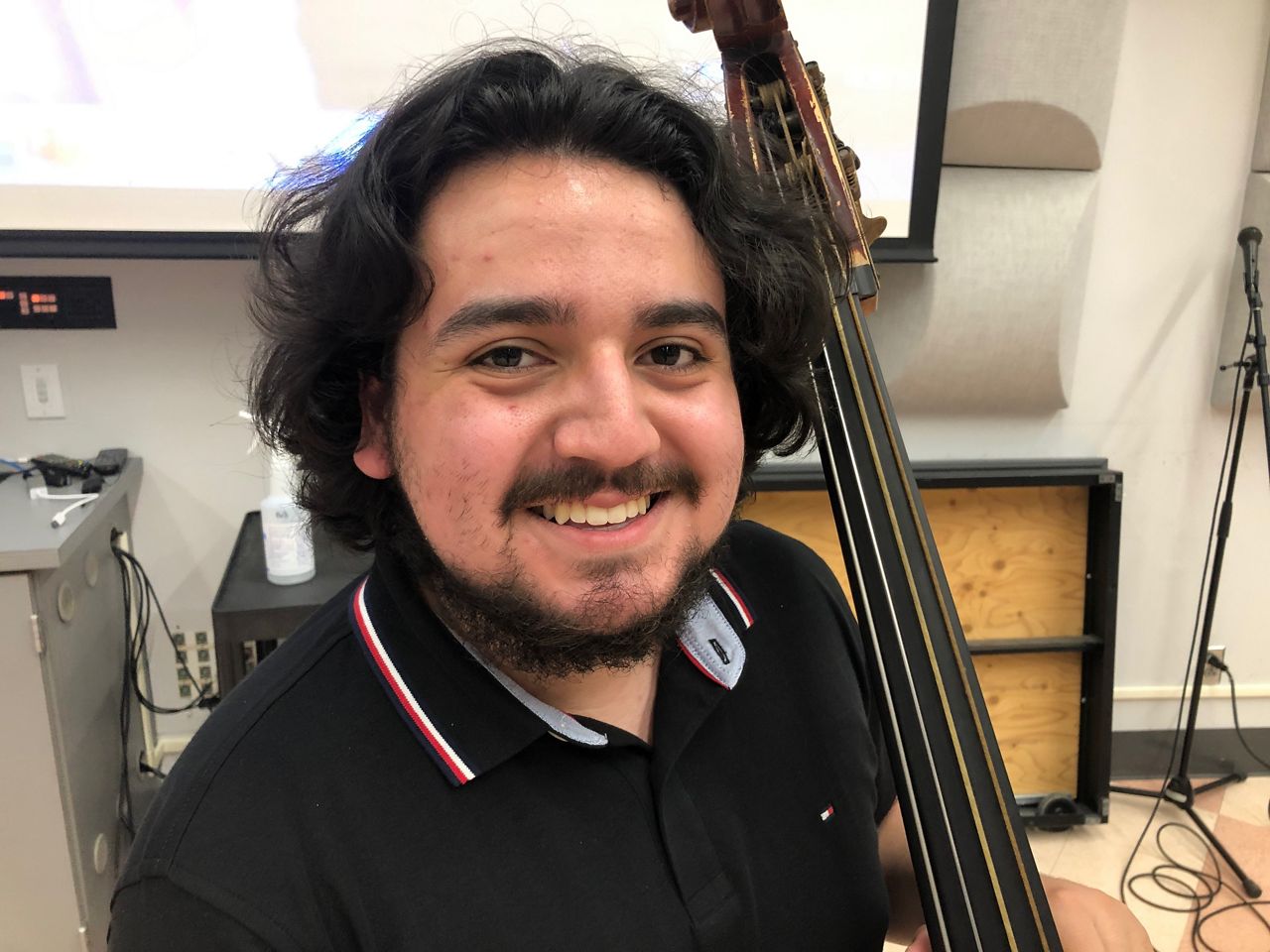 The socially distanced event could be seen on Zoom, and it made an immediate impact on those in the community who saw it.

“After their first concert a community member was so excited that they wrote a check to buy one of the big guitarróns, which is the big bass guitar in a mariachi ensemble,” said Pertl. “‘I want to support this. I’m super excited about this.’ So the community is getting involved. My guess is that when we can, we’ll be playing out in the Appleton community more.”

This will enable Valdez and his ensemble to build on what, for them, is a larger goal.

“The mission is to unify and include people from all backgrounds, and to sort of find solace in this music and to find a community, especially through leading and educating,” he said. “We want to make sure everyone feels welcome and at home in Appleton, and I know that for a lot of people this music is home for them. It reminds them of when they were young, or better times, and my main mission is to bring that home to everybody in the community and beyond. Making sure our ensemble is a proponent of community and home.”