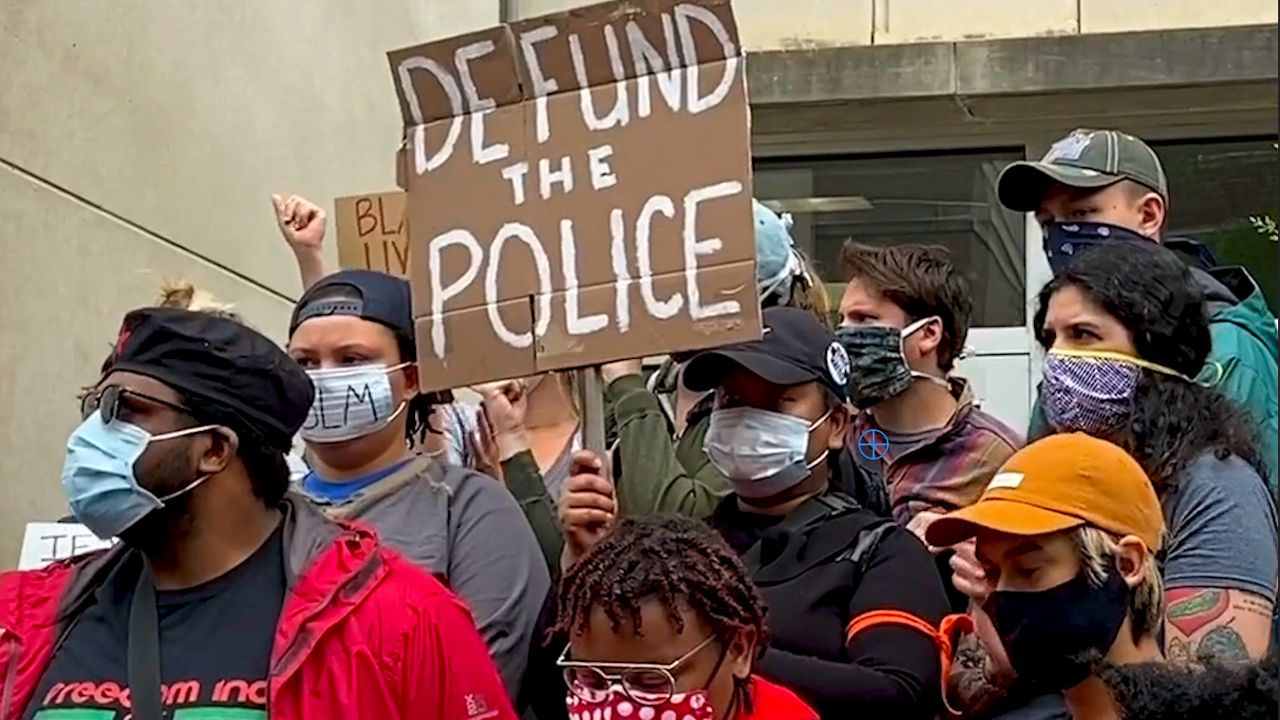 What "Defund the Police" Would Mean for Wisconsin

WISCONSIN (SPECTRUM NEWS) -- "Defund the police" is now a rallying cry at many marches in Wisconsin and across the nation, but what would that look like for our state?

The idea is something a number of grassroots organizations in one Wisconsin city started advocating for a year ago.

It's a rallying cry from protestors that's gaining momentum in this time of civil unrest.  But the definition of defund the police varies depending on the organization.

M. Adams, Co-Executive Director of Freedom Inc. told reporters at a rally in Madison, "those of us who have experienced the police as the occupying force that it is, it means we would get rid of police as you currently understand it.  And instead build radical, Black, life-affirming safety mechanisms."

Freedom Inc. is based in Madison.  The group wants to dismantle the city's police department and give the Black community more control around individual safety.

In Milwaukee one proposal calls for a $75 million dollar cut to the 2021 Milwaukee Police Department budget.  Something Rick Banks told us used to be considered a crazy idea.  "Everybody's like 'what? These people want to take money from the police?'"

Banks is the Political Director for BLOC, Black Leaders Organizing for Communities.  Last year the group joined forces with other area organizations to form the Liberate MKE campaign.  "We definitely were successful in stopping the police department from getting a $14 million increase, which is rare," Banks shared.

Liberate MKE feels MPD's slice of the budget pie is too much.  This year it's almost $300 million, which is about half of what the city allocated to different departments from its general fund.  The campaign wants to move money from the police department and invest it in the Black community. "The safest communities aren't the communities that have more police, they have more resources," Banks explained.

Based on a survey of what Black residents feel is needed in their community, Liberate MKE would focus funds on affordable housing and new construction, mentoring programs for Black youth, mental health and health services and violence prevention programs that don't involve police.  "We are putting too much on police officers. We're expecting them to do everything, and we have to look at people who are not armed to the teeth who can deal with situations and set up these alternative institutions."

Jim Palmer is Executive Director of the Wisconsin Professional Police Association.  He told us, "the issue of addressing systemic bias in our society is of paramount importance."

The WPPA agrees more resources should go to Black communities across the state but funded by a different source.  "We think the government should fund those things.  If we've learned anything from this current pandemic it's that the government can find the money," Palmer said.

He pointed to WPPA poll numbers which Palmer said show minorities surveyed, place value on services like community policing.  "Those are the types of programs that unfortunately would fall by the wayside if you imposed reductions to police spending," he explained.

Police reform is something WPPA supports; they were the leading advocate behind the 2014 law that made Wisconsin the first state to mandate independent investigations of officer involved deaths.  An area where Palmer believes the state can continue to be a leader.

"I think we've proven we can do it before, and we need to find a way to do that again."

The Milwaukee Common Council is taking the first steps to cut funding for MPD.  The council will vote Tuesday on whether the city's budget director should create a model budget for next year.  It would reduce the department's funding by 10%.  This will not be the city's final budget, the 2021 budget won't be adopted until later this year.

That proposed cut would be almost $30 million in funding which MPD told us is the equivalent of around 375 officers.  The department also said,  "The Milwaukee Police Department remains committed to best serving the community with the resources it is afforded, including partnering with the various agencies that provide much needed social services."