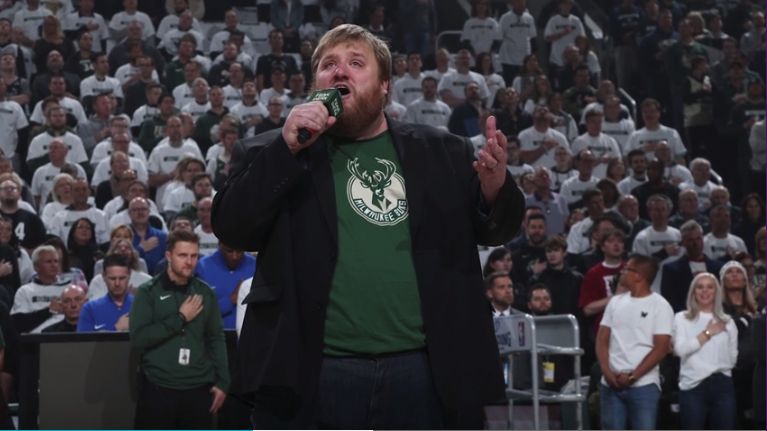 MILWAUKEE (SPECTRUM NEWS) - NBA season is just around the corner. The Bucks will kick off their new season with their first home game in Fiserv Forum in October against the Miami Heat.

In the meantime, the organization is searching for new vocalists to sing the national anthem through open auditions.

“I came in and I sang for the Bucks game about four years ago and it was amazing because the crowd was so energetic and exciting,” said Tajnai.

Just last year, Ben got the opportunity to perform the national anthem during the Bucks' first home game in their new arena.

“It was really cool to see some of my favorite players five feet away from me and then be able to sing for thousands of people was the experience of a lifetime,” said Tajnai.

He’s since sang the National Anthem for 15 of Milwaukee's home games.

Still, however, before every performance, Ben’s adrenalin is pumping.

“Sometimes I take my wife with me and I just mainly take a deep breath and I get out there and just get ready to go. But you can never underestimate that amount of staring at you at one time.”

His smooth, authentic and almost effortless delivery did not come overnight. Ben is living a dream he’s spent years training for.

“A lot of practice, a lot of singing in front of family and parents and getting feedback from people and making sure that I was mentally and physically prepared to do something this grand of a scale.”

Growing up in Milwaukee, the lifelong Bucks fan says he first loved singing in his church choir; eventually using his vocals in front of his high school peers at Arrowhead, as he performed the National Anthem. Years after graduation, Ben says he found his true passion through a leap of faith.

“I also have sung a little backup for the Rolling Stones at one point, which was kind of cool experience and then I thought hey why not give the Bucks a try.”

Next week, hundreds will come to try and follow in Ben’s footsteps. They’ll audition to become the next voice fans will hear before future home games. Ben has advice for these aspiring vocalists.

“My advice would be to prepare, definitely prepare and don’t change the song too much that it’s unrecognizable but also be original as well.”

This 2019-2020 season, as a new talent steps in to sing the anthem, Bucks fans haven’t heard the last from Ben.

If you’re interested in trying out, all auditions will be held at Fiserv Forum in a few weeks on Tuesday, October first from 7 a.m. to 9 a.m. The second audition will begin at 11 a.m. and end at 1 p.m. The third audition will happen that day from 4 p.m. to 7 p.m.