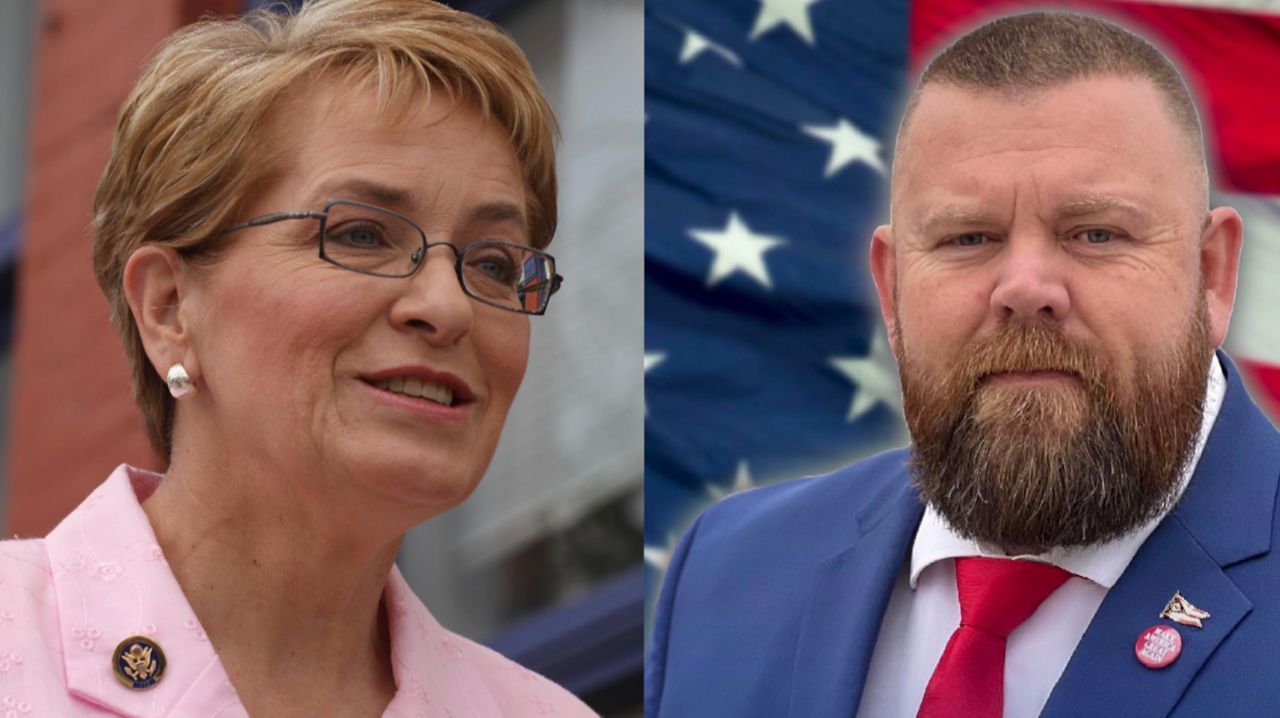 FREMONT, Ohio — The longest-serving woman in the history of the U.S. House is facing her toughest reelection campaign yet.


Rep. Marcy Kaptur, a proud Democrat who has been in Congress for 39 years, is fighting for her political life against a first-time politician, J.R. Majewski, who is a supporter of former President Donald Trump and was at the U.S. Capitol on Jan. 6, 2021. 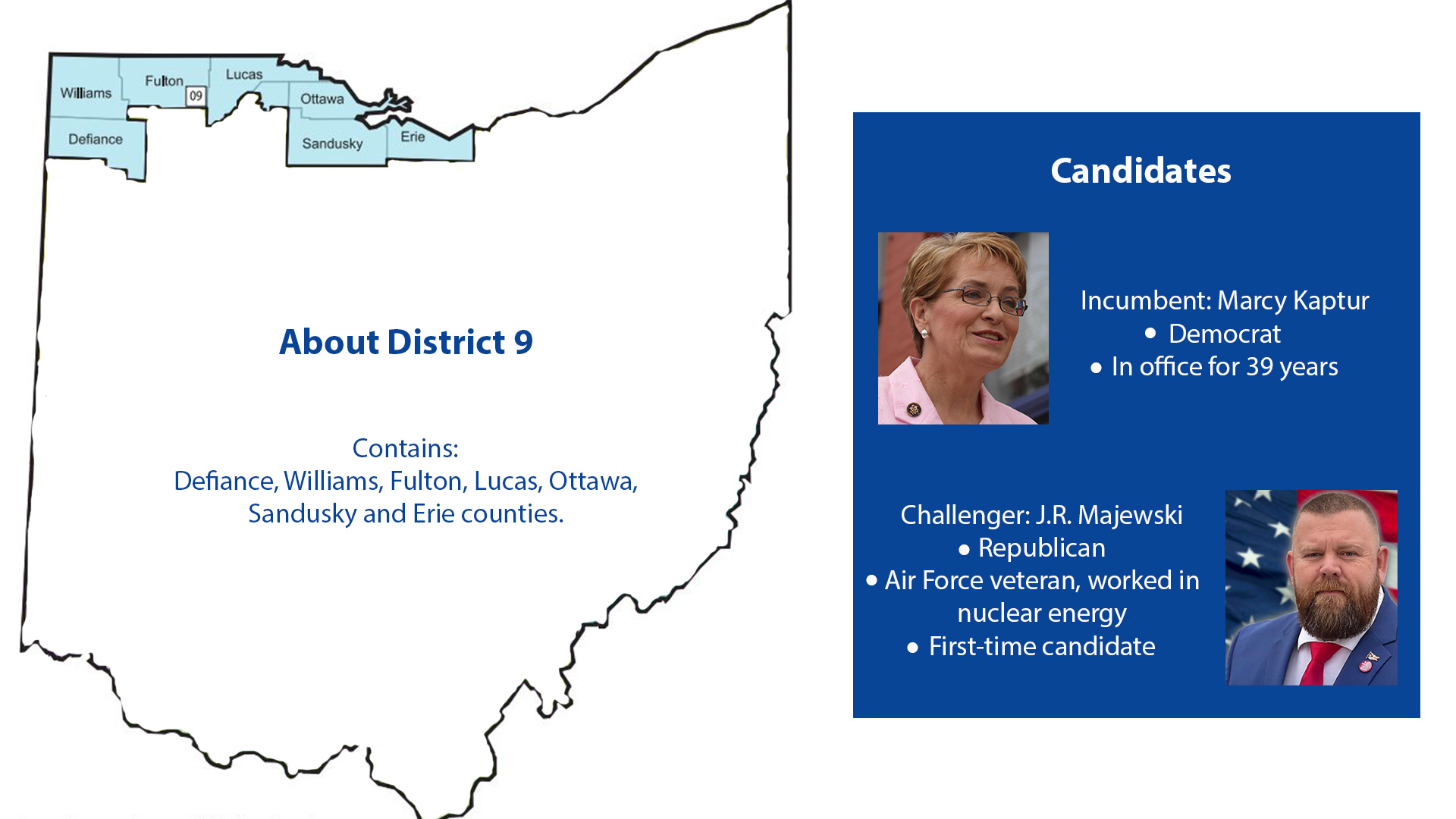 On a recent Monday at the Sandusky County Fair, amid funnel cake and livestock, the political candidates made their pitch to voters in northwest Ohio.

“If all they want is a piece of saran wrap, OK, fine. Change your brand. But if you really want to see something done, pull the lever for me,” Kaptur told Spectrum News in an interview at the fairgrounds.

Watch the full interview with Rep. Marcy Kaptur below or click here to read a full transcript.

The longtime lawmaker is competing in her 21st election while Majewski is running his first political campaign.

In a separate interview at the fair, Majewski said he hopes his support for Trump and background in nuclear energy will pull voters away from Kaptur.

“She’s voted 100% in alignment with Democrats that are destroying the country, and the people of the 9th District know it,” he said.

Watch the full interview with J.R. Majewski below or click here to read a full transcript.

Ohio’s 9th Congressional District has been known as the “snake on the lake” for the last decade, as it snakes along Lake Erie from Toledo to Cleveland. It was heavily Democratic and allowed Kaptur to win by double digits time and time again.

After the redistricting process played out earlier this year, the new 9th District is much more competitive. It stretches from Erie County to the northwest corner of Ohio, meaning it is more rural and more Republican. Election analysts rate it as a true toss-up.

Kaptur is campaigning as a policy wonk who has seniority on Capitol Hill.

She sits on the powerful House Appropriations Committee and chairs a subcommittee that funds energy and water projects across the country.

After her district was redrawn, Kaptur was also named to the House Agriculture Committee, allowing her to connect with farmers and have direct input on the upcoming congressional farm bill.

Democrats at the Sandusky County Fair said they are hoping Kaptur gets reelected in the new OH-09 that includes them.

“Marcy has been very good at representing and bringing her fair share back to her district, and hopefully she’ll do that for us,” said Tom Younker, who lives in Gibsonburg.

Majewski is an Air Force veteran who worked in nuclear energy before entering politics.

He went viral for painting a Trump sign on his front lawn and later surprised Ohio political watchers when he beat two state legislators in the May GOP primary.

In one video, he carries a long gun and kicks through a door, saying, “And I’m willing to do whatever it takes to return this country back to its former glory.”

At in-person campaign events, Majewski tones it down, discussing policy and support for Trump with interested voters.

Some of his supporters acknowledge his online presence may turn some people off.

“When you get to know him and give him a chance, he is not like that at all,” said Jen Turner, who lives in Gibsonburg.

Peg Retting, who lives in Clyde and was helping run the GOP tent at the fair, said meeting Majewski and talking policy helped win her over.

“I feel we don’t need a career politician. And we need something to change,” she said.

Kaptur calls Majewski an extremist because he traveled to Washington on Jan. 6, 2021 and ended up outside the Capitol as supporters of Trump started attacking it—while she was trapped inside.

Majewski told Spectrum News he did not enter the building or commit any violence. He also said he does not regret going.

“I took veterans and people that couldn’t afford to go to Washington, D.C., there to support the president, who went there with peaceful minds. And, you know, I cried that day,” he said. “I have video proof of me doing so. I hated what happened. And it’s a total injustice to keep having to answer questions about why I was there.”

Majewski has also faced scrutiny for using language on social media that is affiliated with the QAnon conspiracy theory, which alleges the federal government is run by a “deep state” of satanic, cannibalistic, child-abusing Democrats who are out to get Trump.

“What I did as a private citizen has absolutely no bearing… I don’t support QAnon. I’ve never been to their forum,” Majewski told Spectrum News.

He calls Kaptur a career politician who is willing to do whatever it takes to get reelected.

Kaptur counters that she’s been at odds with Biden several times throughout their lengthy political careers, including over trade deals.

“When it comes to economics, he and I have had some massive disagreements,” she told Spectrum News.

Since Biden became president, though, Kaptur has voted to fully support his agenda, according to an analysis by FiveThirtyEight. She also campaigned heavily for Biden in the 2020 election.

Kaptur argues effective law-making requires a lifetime of commitment, something she’s proven in her decades of service.

“I never ran for another office. I never aggrandized for myself. I never went to work as a lobbyist. I never went through that revolving door,” she said. “I stayed dedicated because I knew what this area needed.”

Voters in northwest Ohio will decide whether to keep Kaptur in office, allowing her to become the longest-serving woman in history in both the House and Senate, or start fresh with Majewski.