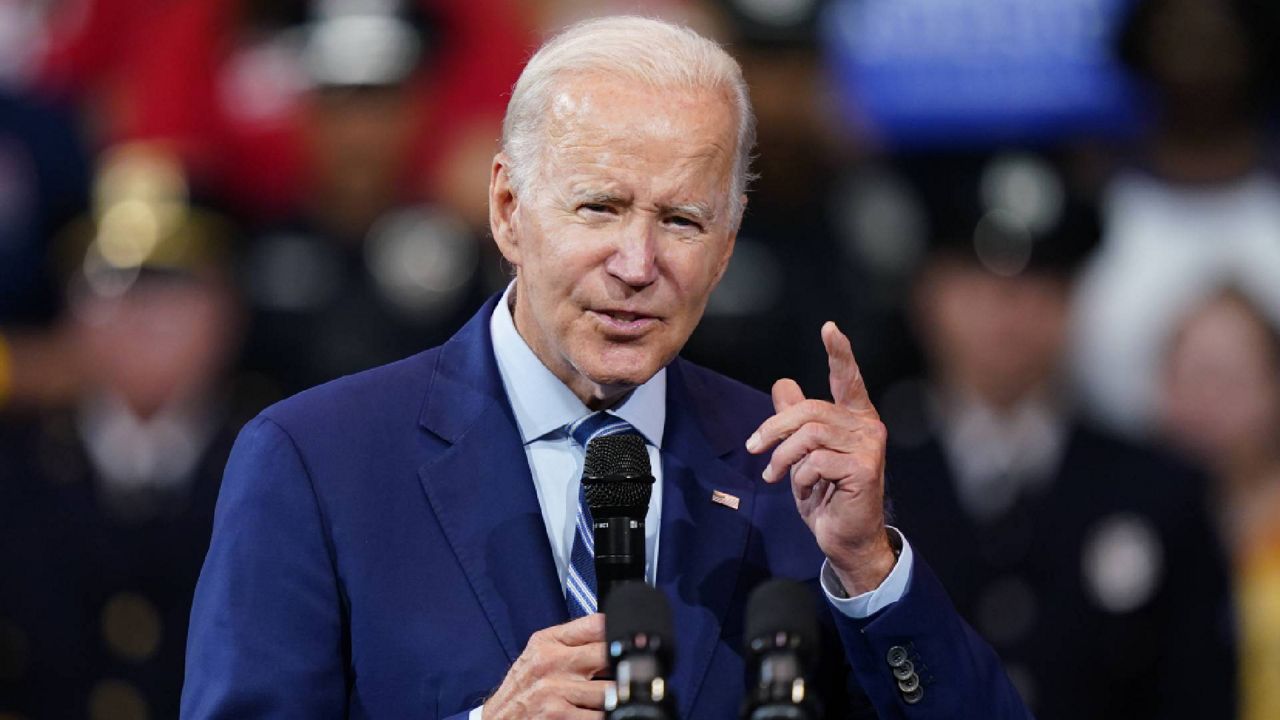 Biden lays out $37B policing, crime prevention strategy in Pennsylvania

President Joe Biden on Tuesday laid out a $37 billion budget proposal for Congress to fund policing and crime prevention efforts across the country, a plan that would focus on hiring and retaining officers, intervention strategies, improving the criminal justice system and efforts to keep guns out of dangerous hands.

The announcement comes as violent crime remains high above pre-pandemic levels, with homicide rates still up nearly 40% in major cities, according to the Council on Criminal Justice (CCJ). Robberies also increased by 19% in 2022 from the same period last year, and car theft is up 15 percent.

Biden detailed his “Safer America Plan” in Wilkes-Barre, Pa., on Tuesday, a little over a month since his COVID-19 diagnosis delayed an initial visit and announcement there.

"When it comes to public safety in this nation, the answer is not 'defund the police.' It's fund the police," he said to applause Tuesday at Wilkes University.

The plan is a proposal for the president’s fiscal year 2023 budget, which Congress can consider.

The policing part of the plan includes nearly $13 billion to hire 100,000 officers over the next five years through the federal COPS Hiring Program. The money would come in the form of grants “to recruit, train, support, and manage” the officers in “effective, accountable community policing," the proposal says.

It "takes a page" out of the 1994 crime initiative that Biden helped spearhead under former president Bill Clinton, said Richard Rosenfeld, a criminology expert and professor emeritus at the University of Missouri-St. Louis. That plan also included hiring thousands of new officers, which in turn did help reduce crime.

"In that sense, it's not a surprising plan coming from the president," Rosenfeld said, adding that the "track record is pretty good" when it comes to boosting police ranks.

Community policing has also long been a policy priority for Biden, which involves assigning police officers to particular areas so they become connected to the local population. Better relationships with officers can lead to greater cooperation with police in a community.

"I'm old enough to remember when cops used to walk the beat," he said.

"When it comes to fighting crime, we know what works: officers on the street who know the neighborhood ... who know the families they're protecting, who get the training they need to be able to do their jobs well, who work to earn the community's trust," Biden added.

The Safer America plan would also include $1 billion for training officers in a way that prioritizes “accountability, transparency, and the well-being of state and local officers,” plus separate money focused on officer well-being and retention.

"It appears to be what the public wants," Rosenfeld said of community policing. "It's an effective way of reducing the tensions that exist between many communities, especially disadvantaged communities of color, and the local police department."

The president also pointed to executive actions he's already taken boost policing, such as one in May that focused on federal law enforcement agencies and limited their use of force.

Biden on Tuesday also turned the focus back to guns, two months after he signed into law the first sweeping, bipartisan reform law in decades.

He once again urged Congress to ban assault weapons and high-capacity magazines, an effort he helped push through when he was a senator in 1994 before it expired in the early 2000s.

"I'm determined to ban assault weapons in this country! Determined!" he roared

He also spoke about a horror that parents in Uvalde had to endure: submitting DNA so their kids could be identified underneath AR-15 bullet wounds.

"We're living in a country awash with weapons of war," Biden said. "What's the rationale for these weapons outside of a war zone?"

Biden's Safer America plan would also include $1.7 billion for the Bureau of Alcohol, Tobacco, Firearms and Explosives (ATF) to enforce gun laws, including by hiring more agents and investigators.

All of this comes as post-pandemic crime rates remain higher than in the years before COVID-19 largely shut down the country.

Homicides are up 39% midyear compared to 2019, according to the CCJ.

Gun deaths remain the most concerning, according to the Major Cities Chiefs Association, which includes police executives representing the largest U.S. cities. U.S. health officials recorded the highest number of firearm deaths ever in 2020, with an average of 124 people dying per day.

Rosenfeld agreed that those are the most serious crimes, but he said his one criticism of Biden's plan is that it doesn't place enough emphasis on more common crimes like shoplifting or car break-ins. Larcenies, which are thefts that don't involve the use of force, are up 20% this year compared to 2021.

"They affect people directly or indirectly, because you know someone who's been a victim of that type of crime far more frequently than [you] would homicides or even other non-fatal gun violence," he said.

The plan does include a single effort to crack down on organized retail theft and resale of stolen items online, Rosenfeld noted.

Asked why the announcement Tuesday took place in Wilkes-Barre instead of a place like Philadelphia, where crime is more rampant, White House press secretary Karine Jean-Pierre did not share any reasoning but instead highlighted that Biden would make the speech near his hometown of Scranton.

Pennsylvania is also a key swing state, and Biden will take two more trips there within the next week, all ahead of November's midterm elections. On Tuesday he voiced his support for Lt. Gov. John Fetterman in his race for U.S. senator and Attorney General Josh Shapiro in his run for governor.

The Safer America plan also includes $700 million for crisis interventions related to mental health, plus a $15 billion for a proposed Accelerating Justice System Reform grant program that communities can use to do things like prevent violent crime, support formerly incarcerated Americans or expand co-responder programs to prevent officers from having to intervene in situations that may need something other than a law enforcement response.