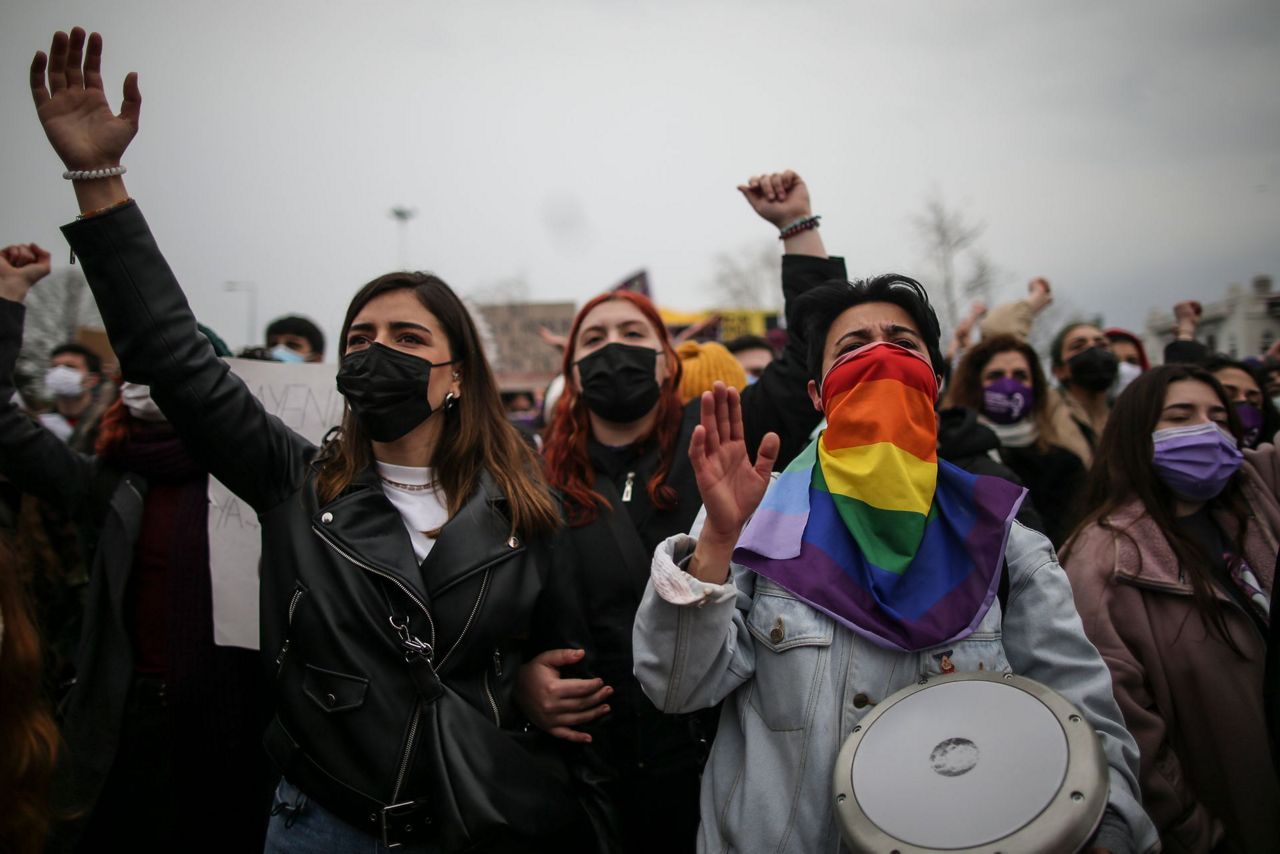 1 of 3
Protesters chat slogans during a rally in Istanbul, Saturday, March 2021, 2021. Turkey's President Recep Tayyip Erdogan's overnight decree annulling Turkey's ratification of the Istanbul Convention is a blow to women's rights advocates, who say the agreement is crucial to combating domestic violence. Turkey was the first country to sign 10 years ago and that bears the name of its largest city. (AP Photo/Emrah Gurel) 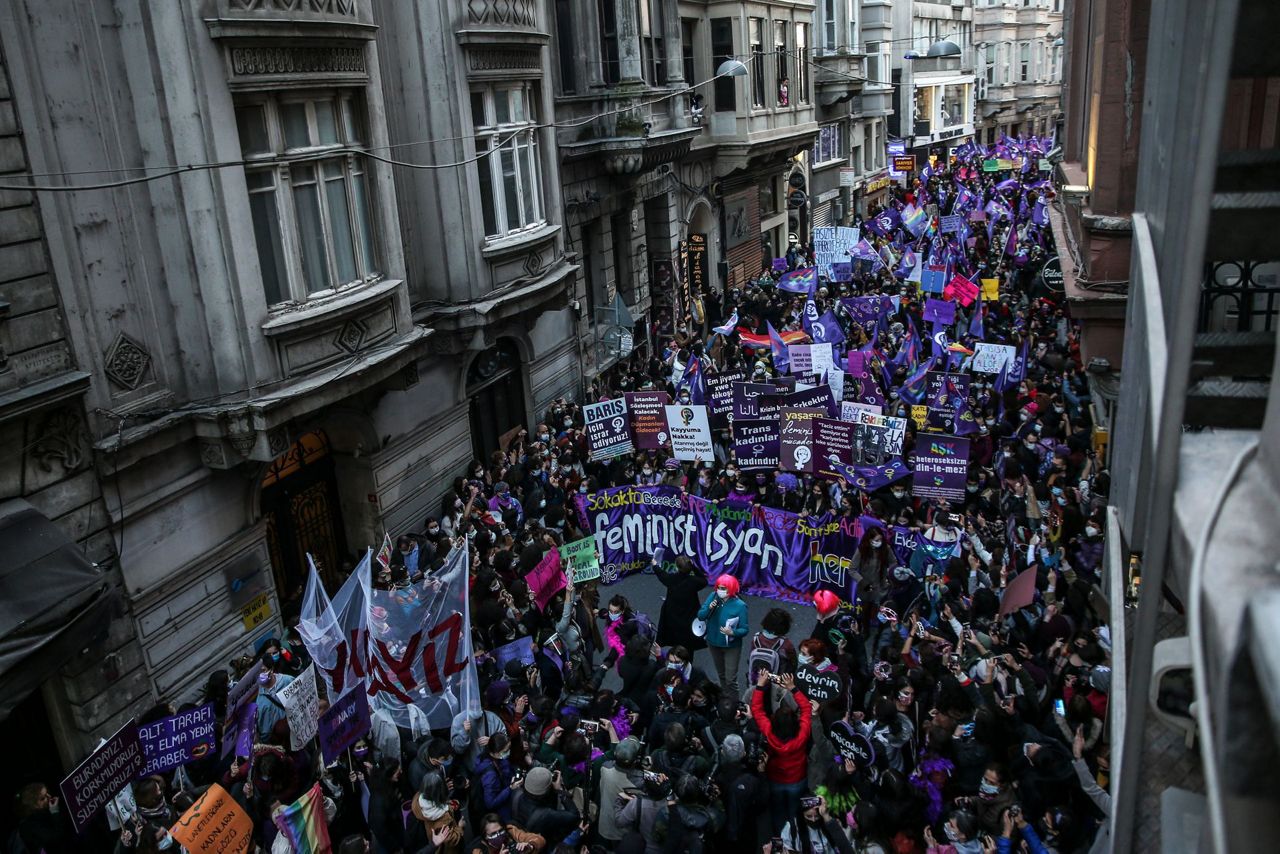 2 of 3
Protesters march to mark International Women's Day in Istanbul, Turkey, Monday, March 8, 2021. People marched to denounce violence against women in Turkey, where more than 400 women were killed last year, demanding strong measures to stop attacks on women by former partners or family members as well as government commitment to a European treaty on combatting violence against women. (AP Photo/Emrah Gurel) 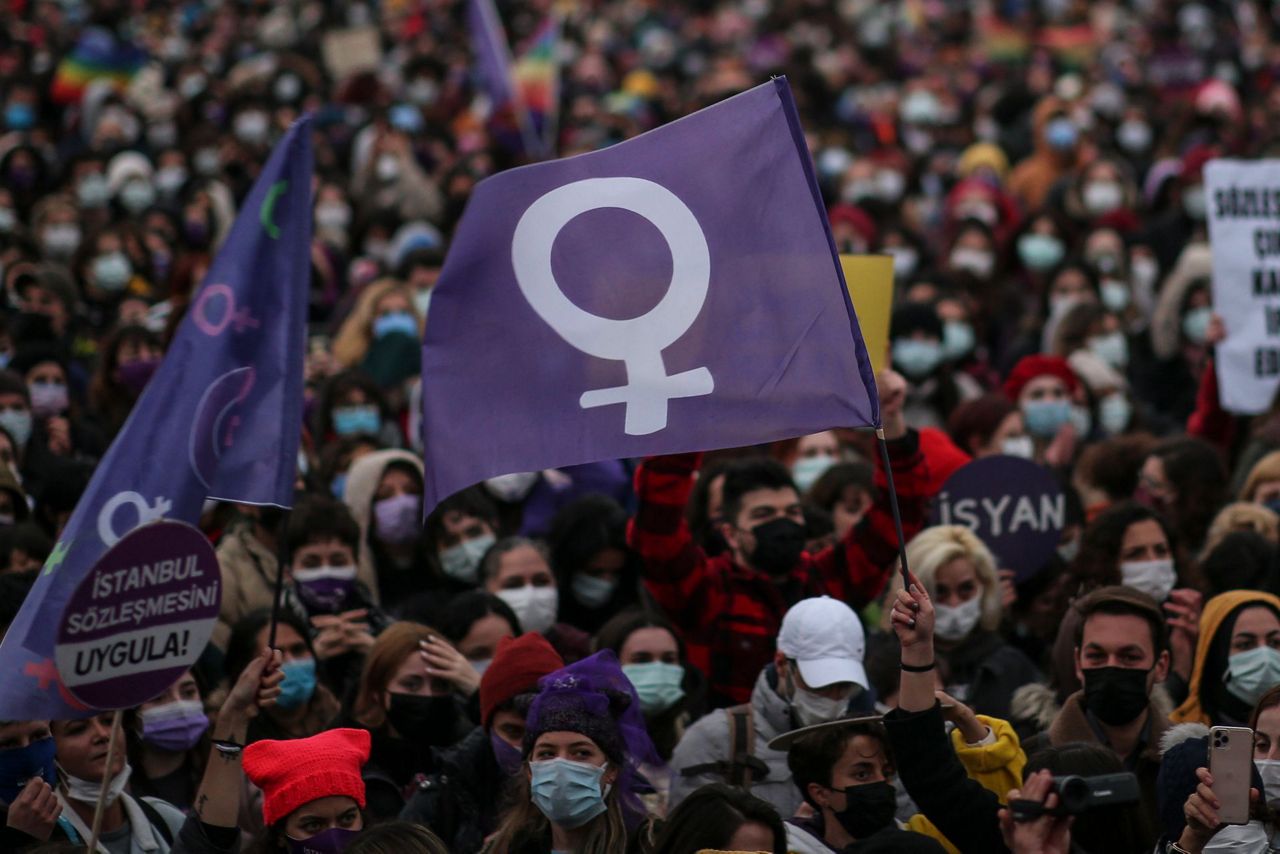 3 of 3
Protesters gather during a rally in Istanbul, Saturday, March 2021, 2021. Turkey's President Recep Tayyip Erdogan's overnight decree annulling Turkey's ratification of the Istanbul Convention is a blow to women's rights advocates, who say the agreement is crucial to combating domestic violence. Turkey was the first country to sign 10 years ago and that bears the name of its largest city. (AP Photo/Emrah Gurel)

In a White House statement posted Sunday, Biden said Turkey’s withdrawal from the Istanbul Convention was “sudden and unwarranted.”

“This is a disheartening step backward for the international movement to end violence against women globally,” Biden said.

Turkish President Recep Tayyip Erdogan ended Turkey’s participation in the Council of Europe agreement through an overnight decree issued early Saturday. The move was a blow to the country's women’s rights movement, which says domestic violence and femicide are on the rise.

The Turkish Presidency's Directorate of Communications issued a statement Sunday explaining that Turkey's unilateral decision resulted from the agreement being used to protect LGBT rights.

“The Istanbul Convention, originally intended to promote women’s rights, was hijacked by a group of people attempting to normalize homosexuality – which is incompatible with Turkey’s social and family values. Hence, the decision to withdraw,” the statement said.

The Istanbul Convention states that men and women have equal rights and obliges national authorities to take steps to prevent gender-based violence against women, to protect victims and to prosecute perpetrators. Its clause on equality and fundamental rights refers to protecting victims without discrimination based on “gender,” “gender identity” and “sexual orientation,” among other categories.

Conservative groups and some officials from Erdogan's Islamic-oriented ruling party take issue with these terms, saying they promote homosexuality. They also say the agreement encourages divorce, undermining the “sacred” family.

“The Turkish State has continuously stressed that the country will not give up on its fight against domestic violence by quitting the Convention,” according to the Turkish presidency's statement, which promised the government would uphold the country's laws and implement new reforms.

Turkey was the first nation to sign the Istanbul Convention, which carries the name of its largest city.

Biden’s statement comes at a time of uncertain Turkish-American relations. He and Erdogan have not spoken on the phone since Biden took office in January.

“Now is the time to show leadership and enhance global efforts to fight violence against women and girls, not to retreat. This is why we cannot but regret deeply and express incomprehension towards the decision of the Turkish government to withdraw from this convention that even bears the name of Istanbul,” Borrell said.