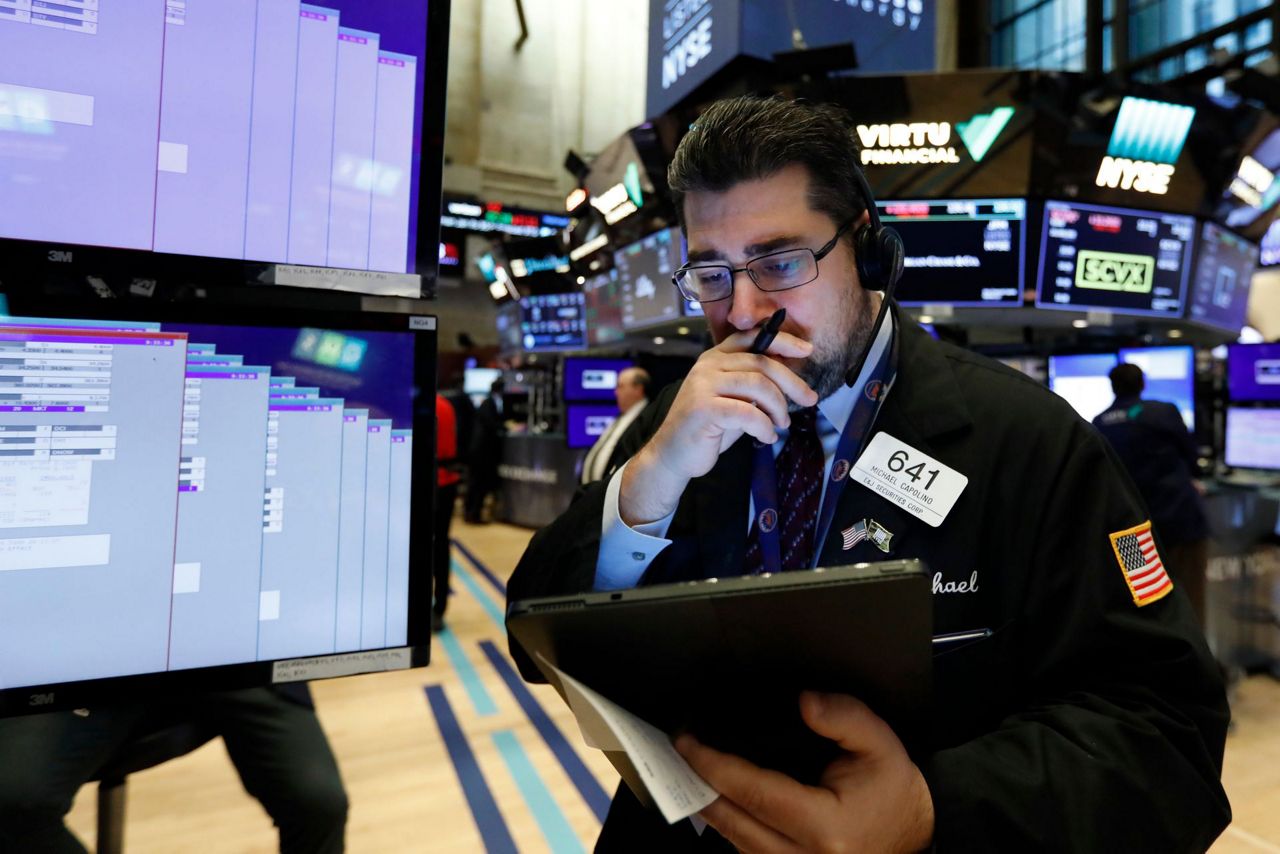 NEW YORK (AP) — Stocks are falling on Wall Street Monday, joining a global tumble for markets as the S&P 500 sinks more than 1.5%.

Losses began in Asia as soon as trading opened for the week, and they accelerated in Europe on worries about the possibility of tougher restrictions there to stem rising coronavirus counts. In the U.S., both stocks and Treasury yields weakened, while prices sank for oil and many other commodities a healthy economy would demand.

Wall Street has been shaky this month, and the S&P 500 has dropped nearly 9% since hitting a record Sept. 2 amid a long list of worries for investors. Chief among them is fear that stocks got too expensive when coronavirus counts are still worsening, Congress is unable to deliver more aid for the economy, U.S.-China tensions are rising and a contentious U.S. election is approaching.

Investors should expect the stock market to stay volatile, perhaps through the November elections, as they wait for these questions to shake out, said Jason Draho, head of asset allocation for the Americas at UBS Global Wealth Management.

Monday's selling was exacerbated by worries about the possibility of more business restrictions in Europe, particularly as the United States heads into flu season, Draho said, and “some investors may be stepping aside.”

David Joy, chief market strategist at Ameriprise Financial, noted that some of Monday’s sharpest drops were concentrated in areas of the market most closely tied to the economy’s strength, such as energy companies and raw-material producers.

“It seems to be a broader expression of worry about the economy," he said.

Bank stocks took sharp losses after a report alleged that several continue to profit from illicit dealings with criminal networks despite U.S. crackdowns on money laundering.

The International Consortium of Investigative Journalists said documents indicate JPMorgan Chase moved money for people and companies tied to the massive looting of public funds in Malaysia, Venezuela and the Ukraine, for example. Its shares fell 3.5%.

Several Big Tech stocks were also struggling again, much as they have since the market’s momentum turned early this month. Amazon and other companies had soared as the pandemic accelerated work-from-home and other trends that boost their profits. But critics said their prices simply climbed too high, even after accounting for their explosive growth.

Shares of electric and hydrogen-powered truck startup Nikola plunged 19.6% after its founder resigned as executive chairman and left its board amid allegations of fraud. The company has called the allegations false and misleading.

General Motors, which recently signed a partnership deal where it would take an ownership stake in Nikola, fell 4.7%.

Investors are also worried about the diminishing prospects that Congress may soon deliver more aid to the economy. Many investors call such support crucial after extra weekly unemployment benefits and other stimulus expired. But partisan disagreements have held up any renewal.

Partisan rancor is only continuing to rise, deflating hopes further. The sudden vacancy on the Supreme Court following the death of Justice Ruth Bader Ginsburg is the latest flashpoint dividing the country.

Tensions between the world’s two largest economies are also weighing on markets. President Donald Trump has targeted Chinese tech companies in particular, and the Department of Commerce on Friday announced a list of prohibitions that could eventually cripple U.S. operations of Chinese-owned apps TikTok and WeChat. The government cited national security and data privacy concerns.

That raises the threat of Chinese retaliation against U.S. companies.

A U.S. judge over the weekend ordered a delay to the restrictions on WeChat, a communications app popular with Chinese-speaking Americans, on First Amendment grounds.

Trump also said on Saturday he gave his blessing on a deal between TikTok, Oracle and Walmart to create a new company that would likely be based in Texas.

Oracle climbed 1.4%, and Walmart gained 1.1%, among the relatively few companies to rise Monday.

Layered on top of all those concerns for the market is the continuing coronavirus pandemic and its effect on the global economy.

On Sunday, the British government reported 4,422 new coronavirus infections, its biggest daily rise since early May. An official estimate shows new cases and hospital admissions are doubling every week.

Prime Minister Boris Johnson later this week is expected to announce a slate of short-term restrictions that will act as a “circuit breaker” to slow the spread of the disease. The number of cases has been rising quickly in many European countries and while authorities don’t seem ready to return to the tough restrictions on public life that they imposed in the spring, the new wave of the pandemic threatens the economic outlook.

The FTSE 100 in London dropped 3.4%, with travel-related stocks taking heavy losses, along with other companies that would be hurt in particular by more restrictions. Other European markets were similarly weak. The German DAX lost 4.4%, and the French CAC 40 fell 3.7%.

September's losses for markets are reversing months of remarkable gains. Beginning in late March, when the Federal Reserve and Congress pledged massive amounts of support for the economy, the S&P 500 staged a massive turnaround and erased all of the nearly 34% in losses caused by the pandemic. Signs of budding economic improvements accelerated the gains as lockdowns eased, but growth has slowed recently and job losses across the country remain stubbornly high.

The S&P 500 is coming off a three-week losing streak, its longest such stretch in nearly a year.

Copyright 2020 The Associated Press. All rights reserved. This material may not be published, broadcast, rewritten or redistributed without permission.