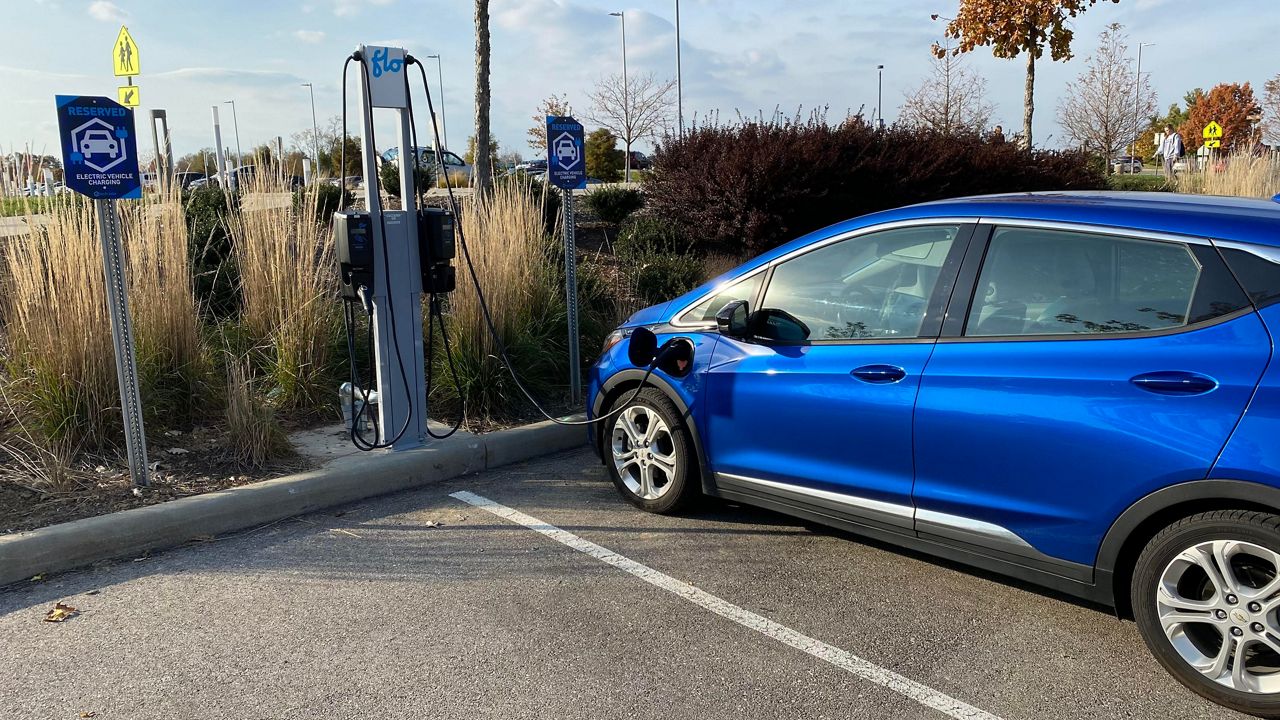 Right now, there are only three recharging stations on NKU's campus. Each has two ports. (Spectrum News 1/Sam Knef)

HIGHLAND HEIGHTS, Ky. — Northern Kentucky University (NKU) is encouraging the use of electric vehicles as part of its sustainability initiative. Because of this, and an overall growing trend toward electric, NKU is planning to give people a lot more options to charge their car.

The university is adding 30 more electric car charging stations to the ones that already exist on campus.

The stations almost look like gas pumps. And it’s pretty much the same process to charge up a car, except drivers might need to leave their car for a few hours, depending on how many miles they need to drive.

“I’ve noticed a couple students using it. I don’t, but I think it’s nice to have, and convenient,” said NKU student Megan Burkhart.

Right now, there are only three stations on campus. Each has two ports.

“It’s been very well utilized. So much so that people were fighting for it, basically. So we knew there was a need for more charging stations on campus,” said NKU Sustainability Operations Coordinator Tiffany Budd.

NKU is partnering with Electrada to put in the 30 new charging stations without passing on any costs to students. Electrada will own, operate and maintain the EV charging equipment installed.

While the existing stations are only for students and faculty, Budd said the plan is to put some of the new stations in public parking garages for anyone to use. Budd said NKU will send out a survey to students to determine where to place the other stations.

It fits into NKU’s goals of being carbon neutral by 205, and reducing transportation emissions by 50 percent by 2030. That second goal was set in place when NKU became the first Kentucky organization to join the Cincinnati 2030 District, which is part of an international network of cities developing a new model for urban sustainability.

“There are a hundred new vehicles coming to market within the next couple of years. That’s a lot of vehicles. I think it’s about 25 million electric vehicles by 2030 in the United States alone. So there’s going to be an increasingly high demand for charging stations. So we’re trying to plan for what’s coming,” Budd said.

The addition also fits into an overall general shift toward electric in the auto industry.

Ford recently announced it’s building a plant in Glendale, Kentucky that will produce batteries for electric cars to support the company’s focus on electric moving forward.

Plus, anyone who’s filled up their tank recently has seen gas prices that are the highest they’ve been in seven years, according to AAA.

Budd said costs to own an electric car in Northern Kentucky are already competitive with owning a gas-powered car. She said it costs approximately $2.21 cents to charge for an hour, which will get the driver about 25 to 50 miles. That’s compared to gas, which is over $3 a gallon.

“You’re already paying more for gas to get the same or less amount of mileage than you are for charging an electric vehicle,” Budd said.

Electric is not fully mainstream yet, but it could be trending in that direction.

“I haven’t put that much thought into it. But I mean it would be interesting. It would be cool to have. And it would be nice to have it convenient at school to charge it,” Burkhart said.

The agreement with Electrada lasts for five years with a five-year renewal option. To learn more about NKU’s commitment to the Cincinnati 2030 District, visit the NKU Sustainability webpage.